4,257cc SOHC Inline 6-Cylinder Twin SU Carburetors 125 bhp at 3,800 rpm 4-speed Manual Gearbox Solid front and Live Rear Axle with Semi-Elliptical Leaf Springs 4-Wheel Drum Brakes *Well known ownership history from new *Stylish design of iconic Bentley *Matching numbers example *Accompanied by period photos and RREC documents THE BENTLEY 4¼ LITER The 'Art Deco' period of the inter-war years was one that saw an increasing interest on the part of motor manufacturers - and independent coachbuilders - in streamlined or 'airline' designs, resulting in the creation of some of the most visually exciting cars ever seen. British company J Gurney Nutting - 'coachbuilder to the maharajas' - had first produced an airline body in 1930 for Woolf Barnato's famous 'Blue Train' Bentley, and the firm would be responsible for some of the most daring Art Deco designs of the next decade. After acquisition of Bentley Motors in 1931, Rolls Royce declared their intention to make the best sporting car of its type in the world. The result was the 3½ liter Bentley which combined power, luxury and superb Rolls Royce engineering. Quickly becoming known as the "Silent Sports Car", the 3½ liter Bentley, soon succeeded by the more powerful 4¼ liter, won almost universal praise for its performance, superb brakes and effortless long-distance touring capabilities. THE MOTORCAR OFFERED This Bentley 4¼ liter, chassis B118HK, was completed in October of 1936, just in time to be exhibited by coachbuilder Gurney-Nutting at the Olympia Motor Show. It was Gurney-Nutting's chief designer, A.F. McNeil, who penned the name "Airflow" to describe the streamlined saloon body, this example being one of just two cars built to this design. Further confirmation of B118HK's appearance at the Olympia Motor Show is provided by noted Bentley historian Michael Ellman-Brown. B118HK can also be seen in its original specification on page 206 of Johnnie Green's book Bentley: Fifty Years of the Marque, where it's seen in "Steel Dust" over grey leather upholstery. Following the Olympia Motor Show, B118HK was delivered to its first owner, Major C. Watson Smythe of Cornwall, via The Car Mart, Ltd of London, in March of 1937. In 1940 it was passed to C.J. Oppenheim, and then to V. Motion of London, a squadron leader in the Royal Air Force. Copies of the DVLA records document subsequent British owners through the early 1960s. It then passed through the famed London dealers Frank Dale & Stepsons to Art Mullaly of Carmel California who would keep the car for a further 14 years. In the late 1980s it was restored to the specification you see today and exhibited by then-owner Malcolm Schneer at a variety of events including the Pebble Beach Concours d'Elegance in 1995 and the RROC National Meet the same year. Today, B118HK still wears it first and only restoration. The car has retained its original British registration number, DNX 401, and overall, remains very correct to its original specification with only the rear spats being a later addition to the stunning body. Additional body features on this example include a sunroof, multi-panel boot, a distinct lack of a rear bumper, a split rear window, Lucas headlamps and central spot lamp. The interior is trimmed in tan leather and carpeting, with red piping throughout. Interior details include a recessed headliner to accommodate taller passengers in the streamlined roofline, a lovely restored dash panel and even a driver-operated rear privacy shade. The engine (K2BY) is mated to a 4-Speed manual gearbox with Bentley's right-hand floor shift, a delightfully tactile and mechanically positive device that is a signature joy of driving a Bentley of this era. Usable and even showable as is, the historical significance and beautiful coachwork also make B118HK an excellent choice for tours, as these 4¼ liter cars offer outstanding performance for the era. 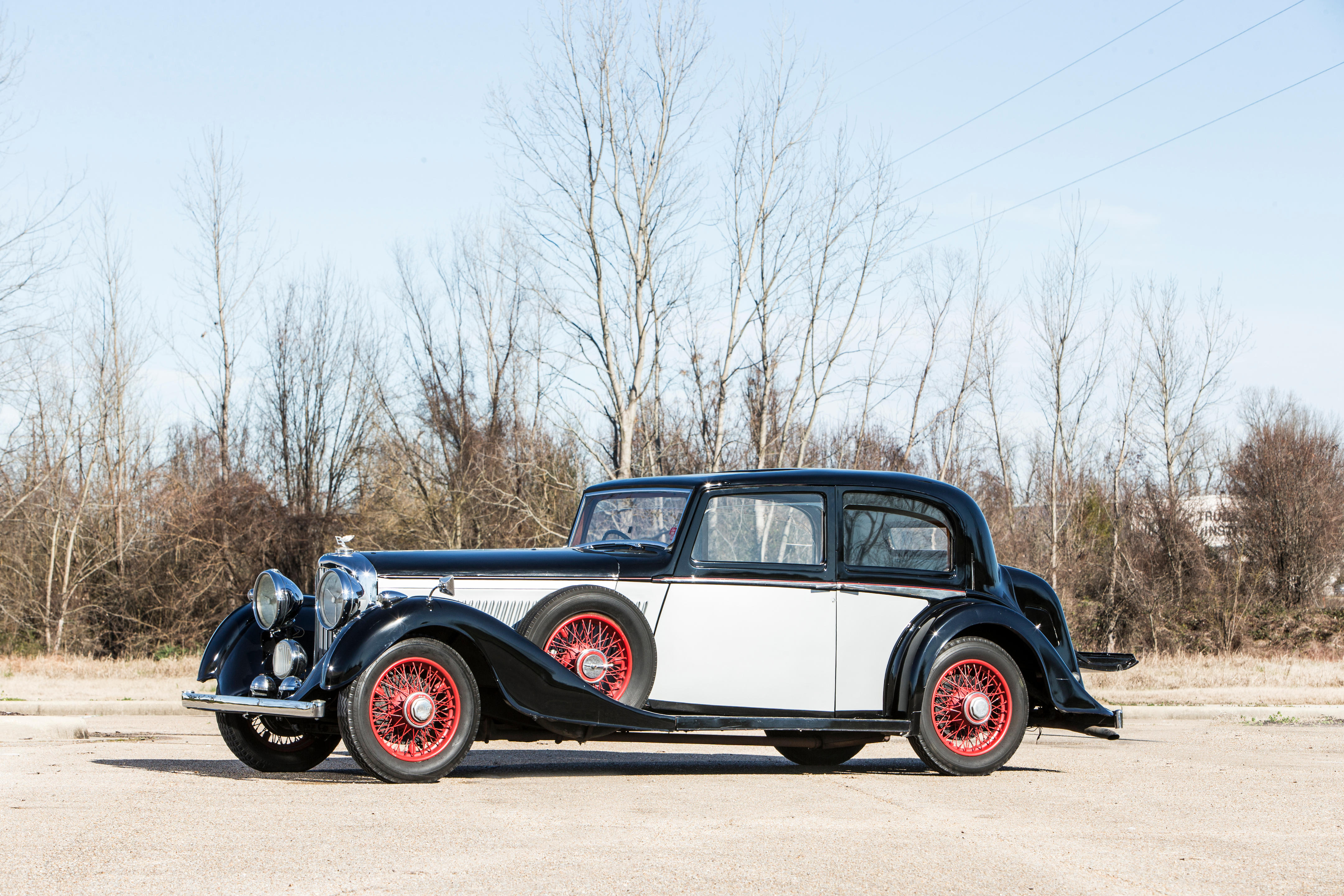 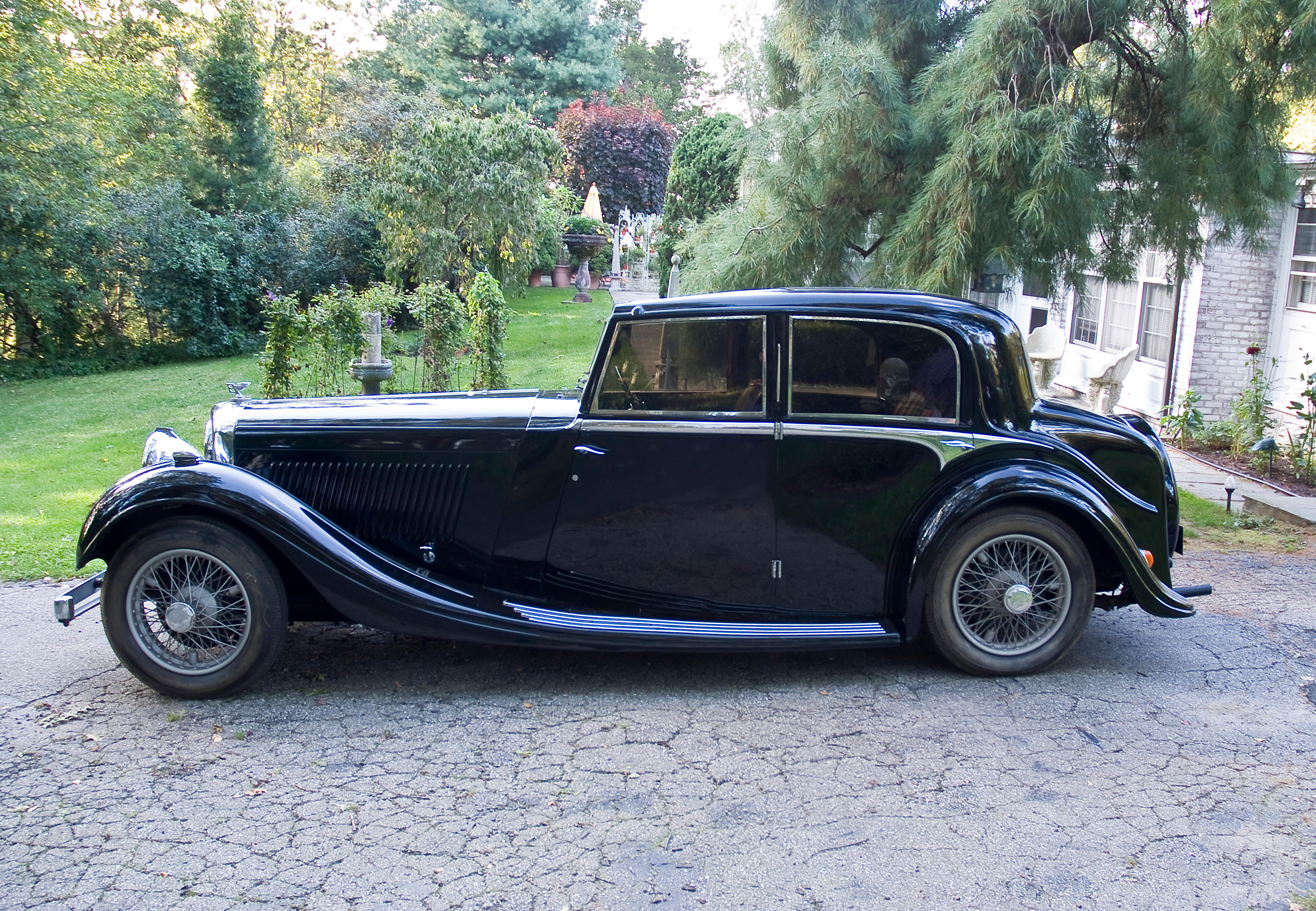 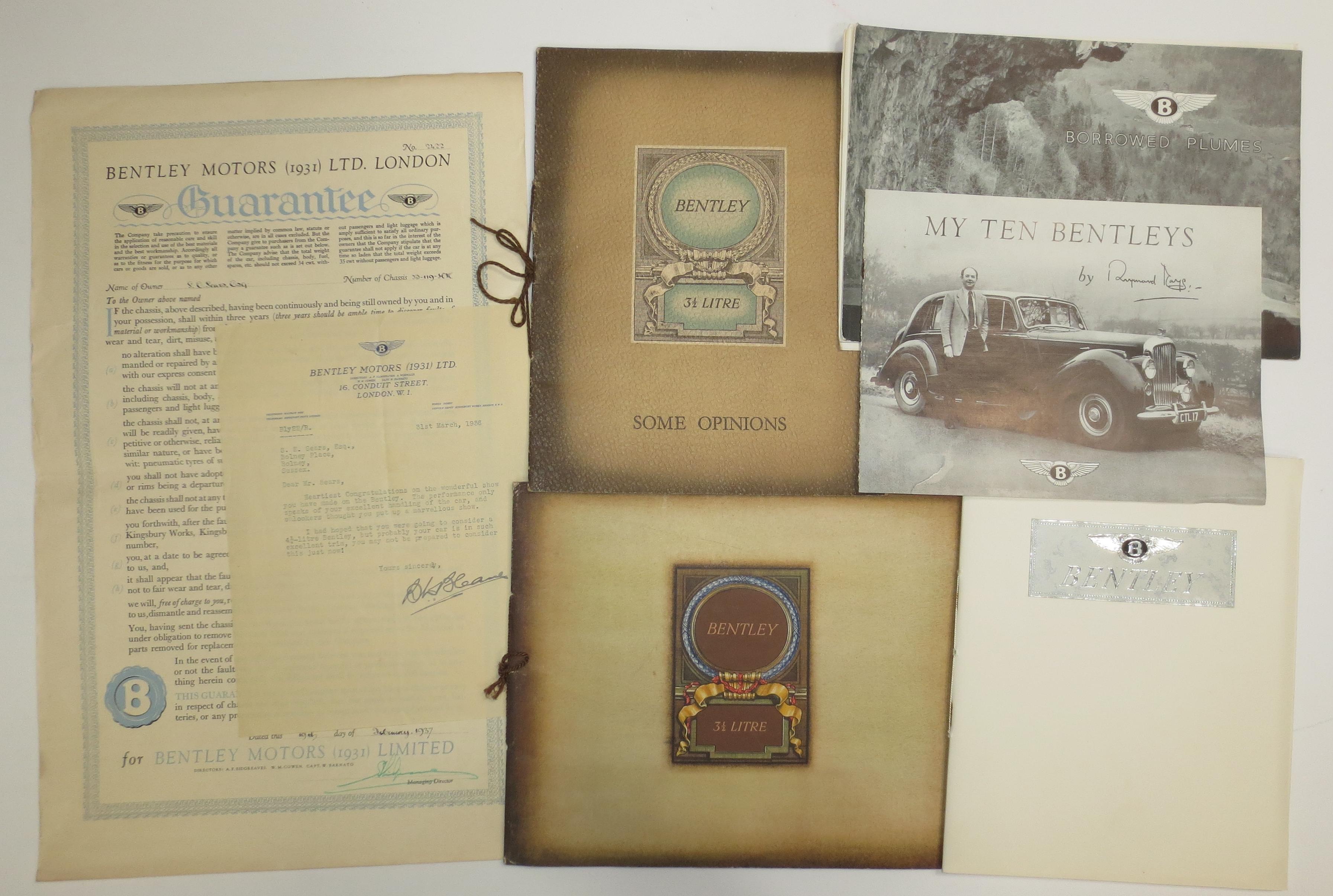 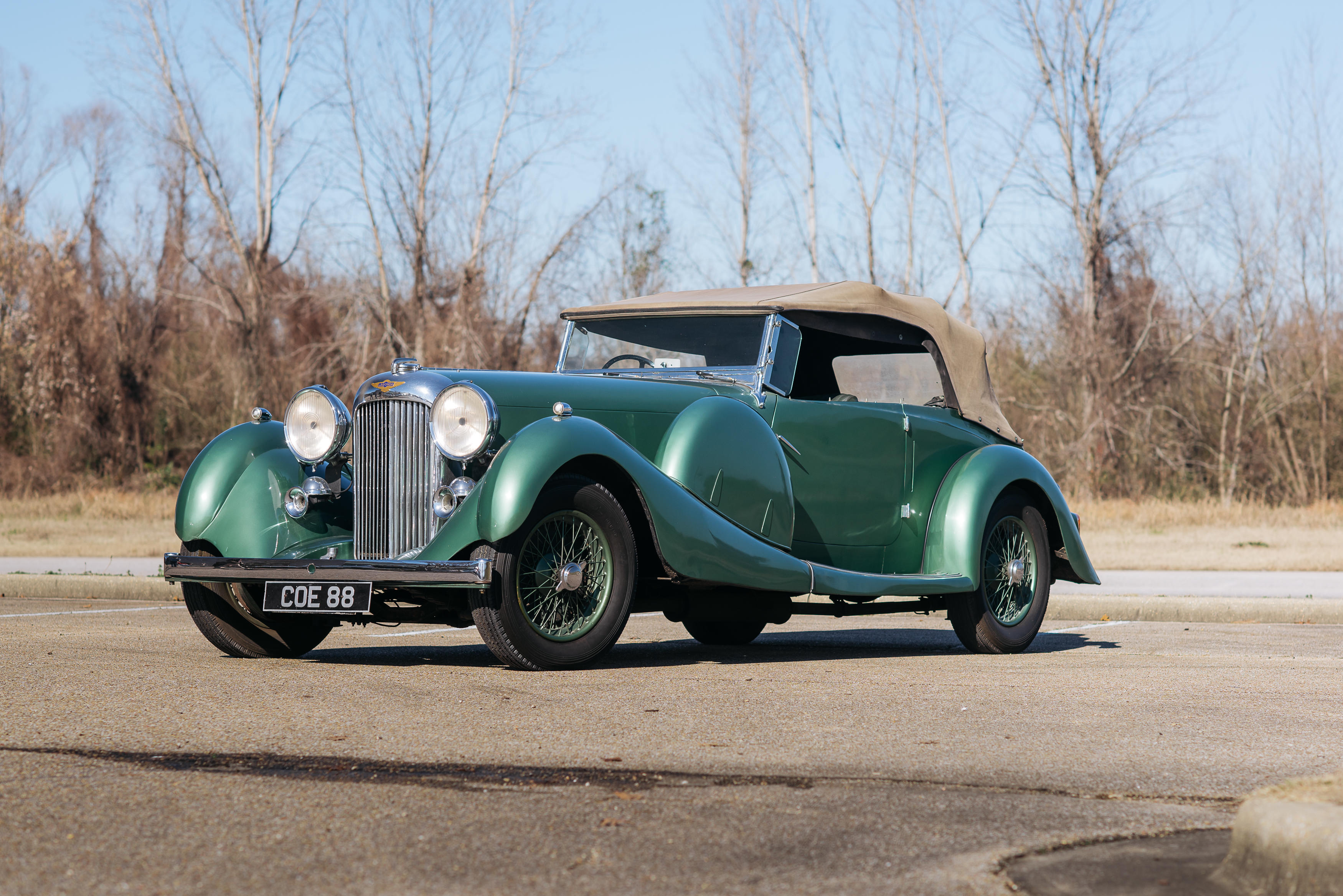 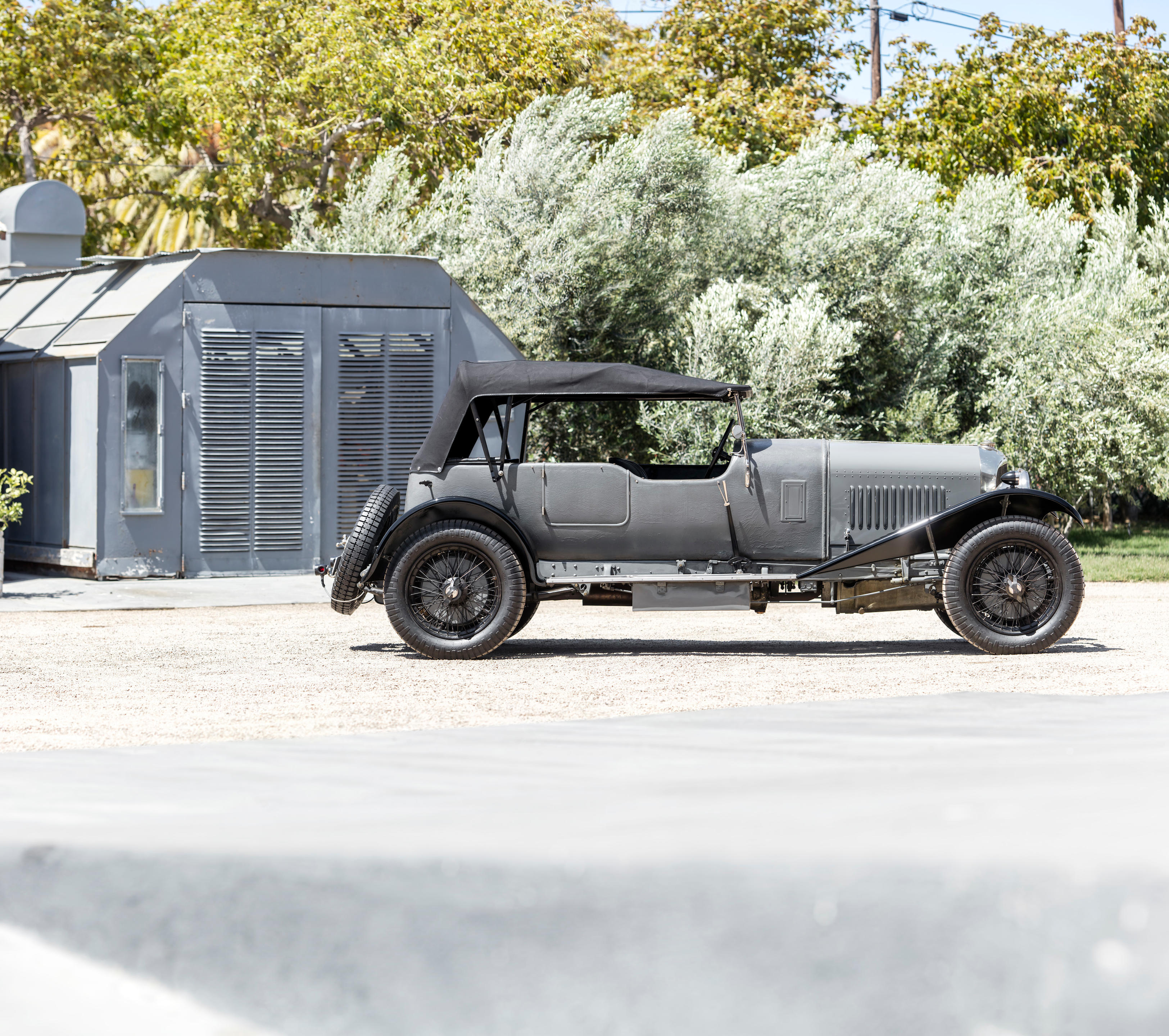