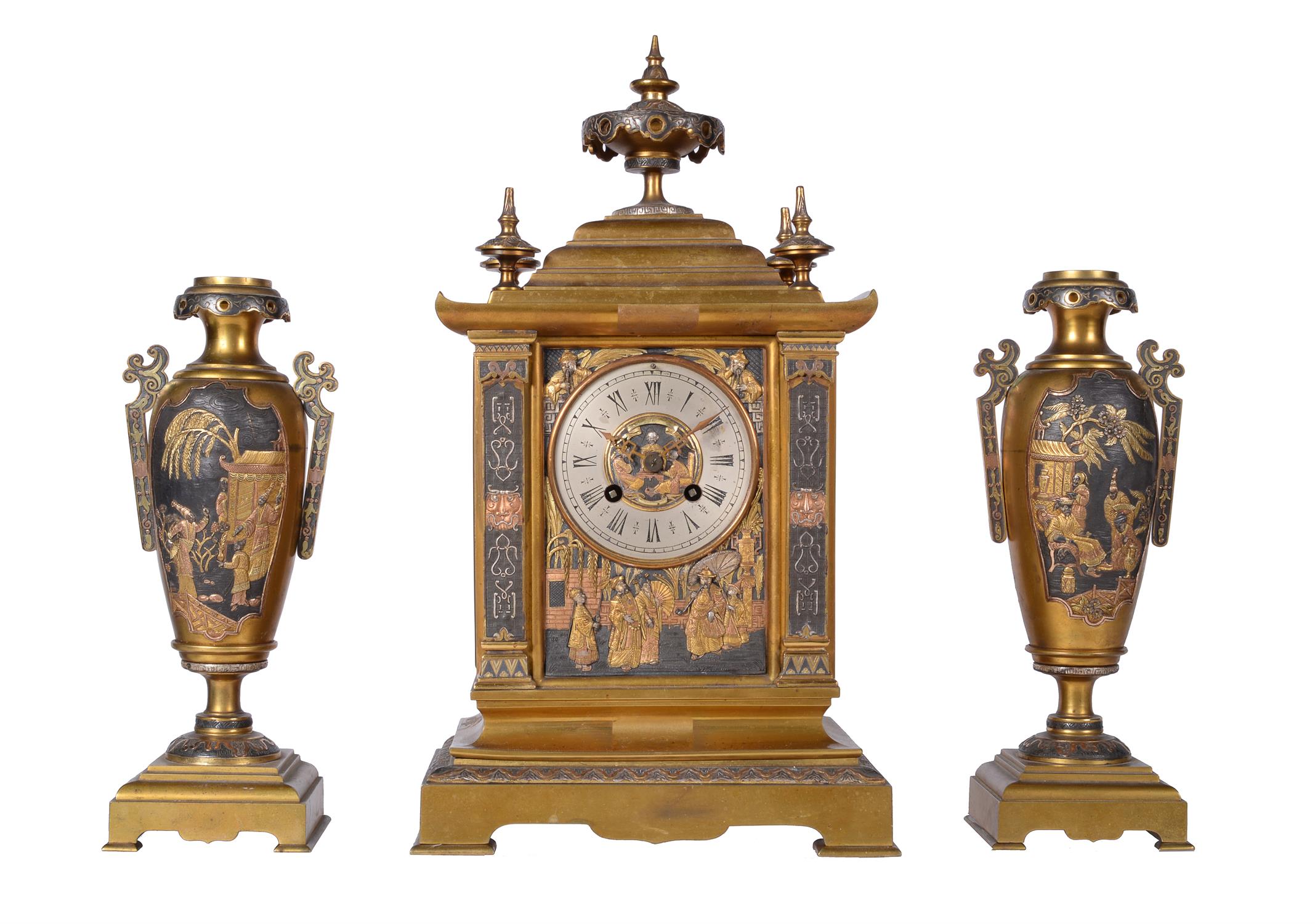 A French gilt brass mantel clock garniture in the Chinese taste with fine multi-coloured relief cast panels Achille Brocot, Paris, circa 1880 The circular two train eight-day gong striking movement with anchor escapement regulated by disc bob pendulum incorporating Brocot type regulation to suspension, the backplate stamped with oval star-centred trademark AB over serial number 6002 14, the dial with raised relief cast centre decorated in burnished gilt, copper and grey/brown patination with Chinese scholars within silvered Roman numeral chapter ring with stylised star half hour markers and unusual asymmetric trellis pierced gilt hands within circular gilt bezel, the frosted gilt case with large grey/brown patinated and silver highlighted canopy-shaped finial to the stepped caddy pagoda superstructure applied with further disc and spire finials to angles, the front finely relief decorated in gilt, copper, silver and grey/brown patina with scene of courtiers within a trellis garden beneath the dial and with further figural infill to upper quadrants, flanked by stylised grotesque mask centred strip pilasters decorated with silvered strapwork, the sides inset with further panels of figures at leisure within conforming garden settings, on skirt base with generous cavetto top moulding over pad feet with shaped apron between, 39cm (15.25ins) high; the garniture side pieces each modelled as a slender ovoid twin-handled vase with pierced flared rim over applied shaped figural panel matching those of the clock to front and on conforming square platform base, 27.5cm (10.75ins) high. Provenance: The beneficiary of the Estate of a private collector, East Midlands. Achille Brocot is recorded in Allix, Charles and Bonnert, Peter CARRIAGE CLOCKS, Their history and development as born in 1817 and died in 1878. The Museums Victoria (Australia) website notes that Achille patented several improvements in clock mechanism escapements, and invented the 'Brocot Suspension', an adjustable pendulum spring which enabled time keeping to be regulated by altering the length of the pendulum suspension spring by a key turned in the dial. He also introduced a jewelled deadbeat escapement, sometimes called a visible escapement as it was often mounted in the middle of the dial. Achille was awarded a first class medal at the Paris Exhibition in 1855, and in 1856 was appointed Treasurer to La Société des Horlogers in Paris. He published a 'Calculation of the Wheels by Approximation' in 1862. His sons Achille and Paul continued the business following Achille senior's death 1878. The firm was taken over by rival clock maker Gustave Gibaudet in 1889. The highly decorative panels of the current lot employs a series of differing techniques to gild, silver, copper and chemically patinate the finely finished relief cast and engraved scenes to provide depth and contrast. This rare form of decoration is normally only seen on a select few high-end carriage clock cases with an example incorporating comparable decoration to all parts of the case also included in the present sale (lot XX). Another is also illustrated in Roberts, Derek CARRIAGE and other Travelling CLOCKS on page 160 (Fig. 9.38) where the decoration is described as 'quite outstanding' and 'must have been one of the most time consuming methods of decorating a carriage clock'. Condition Report: Movement is in working condition with no visible evidence of alteration or significant replacements with the exception of the hammer for the gong; the mechanism is very dirty hence a clean and overhaul is required. The chapter ring of the dial is a little rubbed with some light patchy oxidation. The case is generally in good original unrestored condition with only very light wear to the original finishes however there is overall light/moderate discolouration and tarnishing predominantly to the gilding. The rear panel is missing two of its four securing screws. The urn side pieces are in sound original condition (commensu 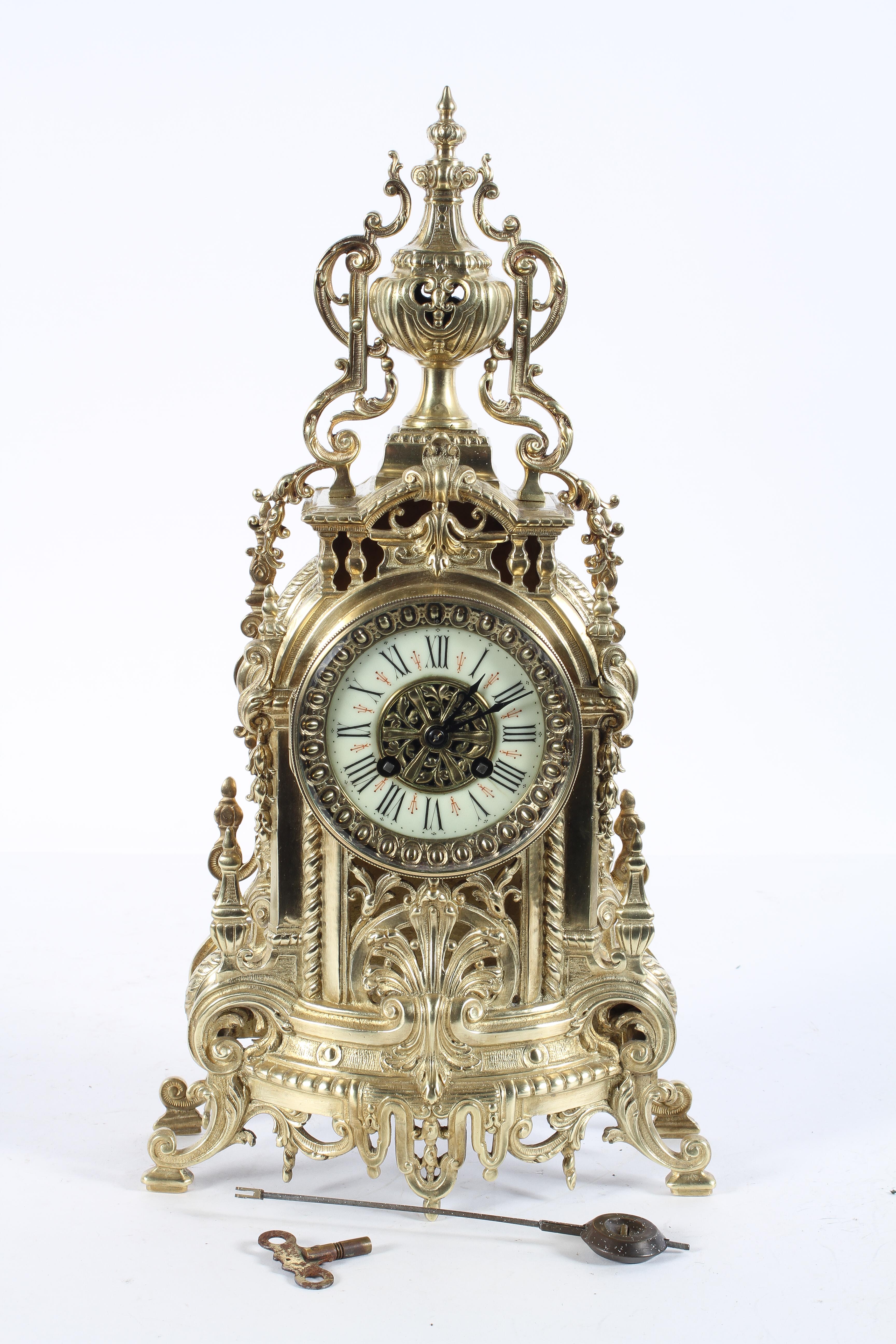