A George I carved and gilt-gesso centre table, circa 1720 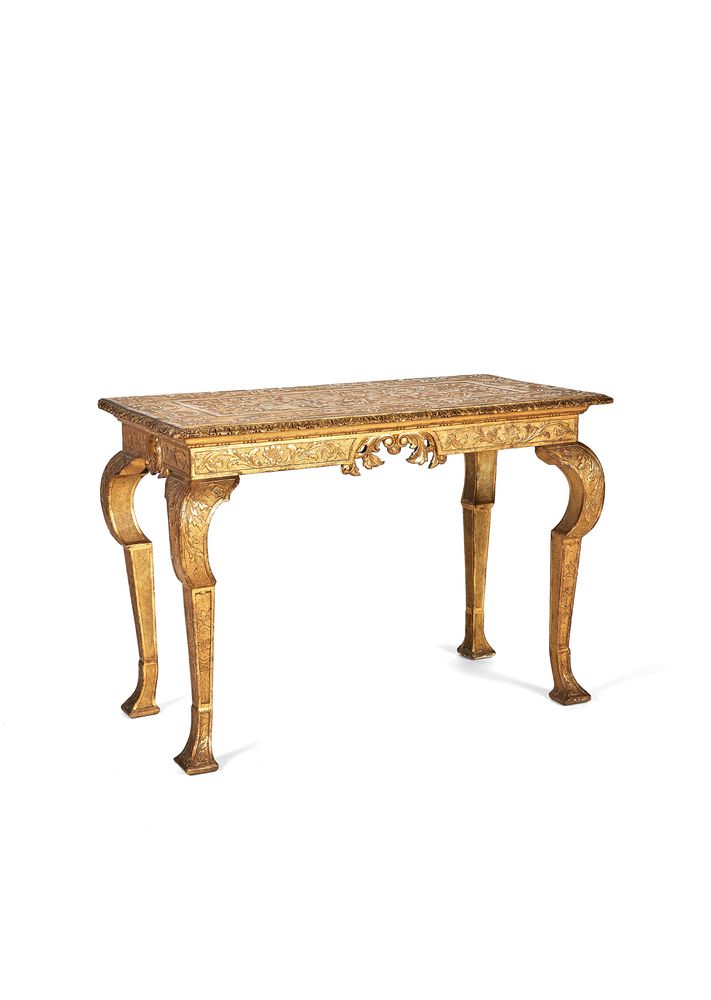 A George I carved and gilt-gesso centre table, circa 1720, in the manner of James Moore the rectangular top with a central panel decorated with a sunflower amongst acanthus and further flowers within a scrolling acanthus and strapwork border and leafy moulded edge, the conforming frieze centred on each side by pierced and carved ornament, the hipped cabriole legs on square pad feet, the underside bearing a the trade label of 'LENYGON & MORANT, Ltd., 31, OLD BURLINGTON STREET, LONDON, W.1.' with the manuscript '23/2/39 Property of HRH The Duke of Kent KG, a carved and gilt gesso centre table (one of a pair); together with another trade label of 'FRANK PARTRIDGE & SONS LTD., WORKS OF ART, 26 KING STREET, St James's SW and at New York', Also bearing the chalk number '3759'. n74cm high, 111cm wide, 59cm deep, re-gilt and some re-gessoing, the angle brackets to the legs replaced Provenance: Property of HRH Prince George Duke of Kent KG Lenygon and Morant, Ltd. Frank Partridge & Sons Ltd. Prince George Duke of Kent, KG, KT, GCMG, GCVO According to the Lenygon and Morrant paper label on the underside, the present lot was the property of Prince George Duke of Kent, the fourth son of King George V and Queen Mary and the younger brother of Edward VIII and George VI. Prince George served in the Royal Navy in the 1920s and then briefly as a civil servant. He became Duke of Kent in 1934 following his marriage to Princess Marina of Greece and Denmark. Like his mother, Queen Mary, Prince George had a keen eye for period furniture and decorative arts, building an impressive collection to furnish his home. In the late 1930s he served as an RAF officer, but was killed in a military air-crash on 25 August 1942. The property of Prince George and his wife Princess Marina was sold at Christie's in 2009 , however the present lot was sold with its counterpart earlier in the 1930s.The Table Elements in the design of the present table have marked affinities with documented examples of early 18th century giltwood furniture by the Royal cabinet-maker James Moore In particular the strapwork decorated top relate to tables in the Royal collection recorded at Hampton Court Palace, and Kensington Palace, both by the same maker. A possible influence on Moore and his predecessors' designs was a French engraving for a side table by Pierre Le Pautre, published in his Lievre de tables qui sont dans les apartmments du Roy, c. 1700, pl. 4, which in common with the offered lot features a diaper trellis pattern to part of its frieze (see Adam Bowett, Early Georgian Furniture, 1715-1740, 2009, pp. 300-201, pls. 5:1-5:3). The unusual broken cabriole form to the legs is also seen in a set of giltwood chairs at Blenheim, a pair of tables formerly in the collection of the Duke of Newcastle, both firmly attributed to James Moore and a pair of giltwood torcheres at Treasurer's House, York possibly commissioned by 1st Duke of Marlborough for Blenheim Palace from James Moore Snr. (1670-1726). Lenygon and Morant Francis Lenygon opened Lenygon & Co., in 1904, and in 1909 merged with Morant & Co., to become Lenygon & Morant, with premises at 31 Old Burlington Street. Francis published his seminal book 'Decoration and Furniture of English Mansions during the Seventeenth and Eighteenth Centuries' in 1909 and featured a series of illustrations showing several pieces acquired by the firm in situ at their Burlington Street studio. He made a name for himself by acquiring complete period rooms, including a Dutch Painted Room from Groningen, Holland and others, which were described as 'the most interesting and important complete room[s] - both historically and artistically - which has ever been exhibited (Lenygon & Morant, Description of the Painted Room in the Collection of Messrs Lenygon & Co. Ltd, 1910). The firm received commissions from many prominent patrons, including industrialists, aristocrats and the Royal family. The firm held royal warrants under four successive kings:

A George I carved and gilt-gesso centre

A GEORGE I CARVED GILTWOOD MIRROR

A PAIR OF GEORGE II CARVED GILTWOOD SIDE