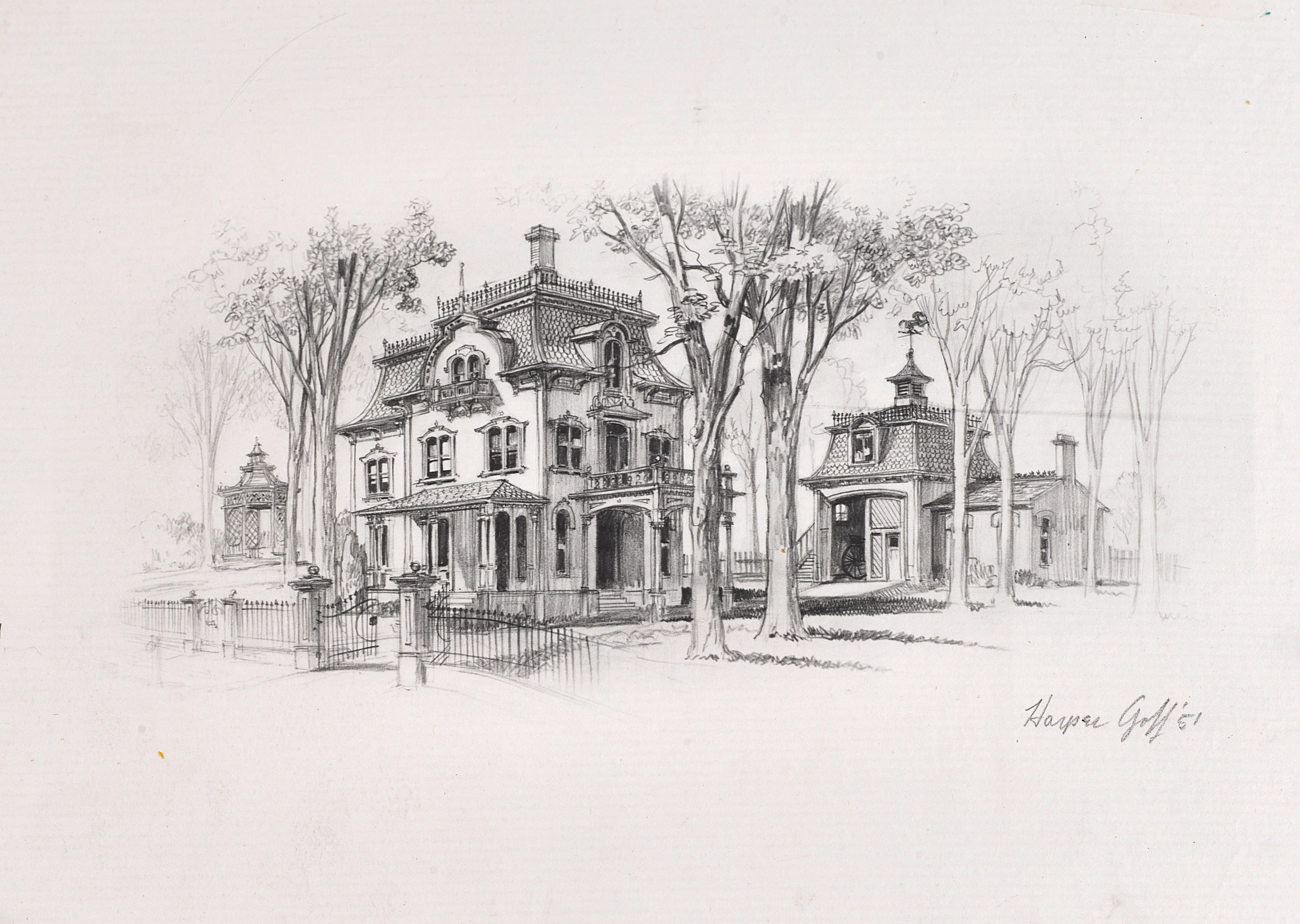 Comprising 7 Harper Goff Disneyland designs, pencil on paper, depicting a town square with statue and horse trough; a "Drugstore and Barbershop"; "Scheme #1 Blacksmith Shop + Livery Stable"; "Church, Graveyard, and Haunted House"; a Victorian house with carriage house; "Country Store"; "Weekly Bugle" newspaper/job printing office; all signed and dated ("Harper Goff '51"), 9 x 10 in.; 40 black-and-white and color photographs of Disneyland's Jungle Cruise under construction, silver gelatin prints, various sizes, many annotated by Goff; a caricature of Goff, crayon on paper, 5.5 x 6.25 in.; Goff's Walt Disney Productions business card; with other Disneyland ephemera; with materials related to Goff's military camouflage project: 25 black-and-white and 2 color photographs, various sizes, and three clipped articles about the project, two of which were written by Goff, and a typed letter signed ("W.H. Mohr"), 1 p, April 14, 1942 from the 601st Engineer Battalion (Camouflage) regarding Goff's enlistment into their unit; 52 pp total (7 are blank), housed in a white photograph album. In this extraordinary scrapbook, Harper Goff documents his work on Disneyland's early development and other projects. When Walt Disney first hired Goff in 1951, Goff was almost immediately assigned to Disney's theme park project. Among the key pieces in this album are Goff's seven original pencil designs of Disneyland, depicting a different, more rustic concept of the park. (These finished-looking illustrations were reproduced in Disney's The WED-Way magazine; a copy is included.) Goff's drawing of a haunted house atop a hill is among the very earliest renderings of what became Disneyland's Haunted Mansion. The two cities that most influenced Disneyland's overall nostalgic look are Disney's hometown, Marceline, Missouri, and Ft. Collins, Colorado, where Goff grew up. Notable among Goff's drawings is one of a newspaper office: Goff's father owned the Ft. Collins Express-Courier. There are also vintage photographs of Ft. Collins' courthouse, the inspiration for Disneyland's Courthouse, and of Ft. Collins' white marble First National Bank. This album's treasure trove of Disneyana continues with an exceptional group of 40 vintage black and white photographs taken during the construction of Disneyland's Jungle Cruise, many with Goff's contemporary annotations; they are very likely unpublished. At least four of Goff's notes on the photos are addressed directly to "Walt," with daily construction reports. These images--some of them linked to create panoramas--depict the arduous process of making the Cruise. Goff drew the Congo Queen boat chugging down the river directly in pencil on one black and white photo of the dry Jungle Cruise basin. Goff went on many buying trips to any available tree supplier to get the necessary foliage for the Cruise. In notes to Disney, Goff describes his efforts to expand their jungle, to keep their tractor drivers from uprooting their surveyors' stakes, and the other costly daily hassles of creating the attraction. One image shows Goff standing, arms akimbo, beside the attraction's life-size crocodile figures. The sixteen color photographs of Goff and others working on the Cruise were mostly printed in May 1979 from original vintage negatives or slides; one color candid prominently features Walt Disney himself on the Cruise site. In another reproduced drawing, Goff warmly lampooned the project with a cartoon drawing comically combining the Jungle Cruise boat with his Nautilus submarine. Goff's work on Disneyland was gently mocked, likely by a fellow Disney employee, in an original caricature in crayon depicting a god-like Goff shaping a sunny landscape and headed "In the beginning Goff created the Earth." The album's first nine pages are devoted to Goff's World War II-era work on a military camouflage project, designing paint schemes to disguise important buildings from aerial detection. Album: 2.25 x 12.5 x 16.5 in. 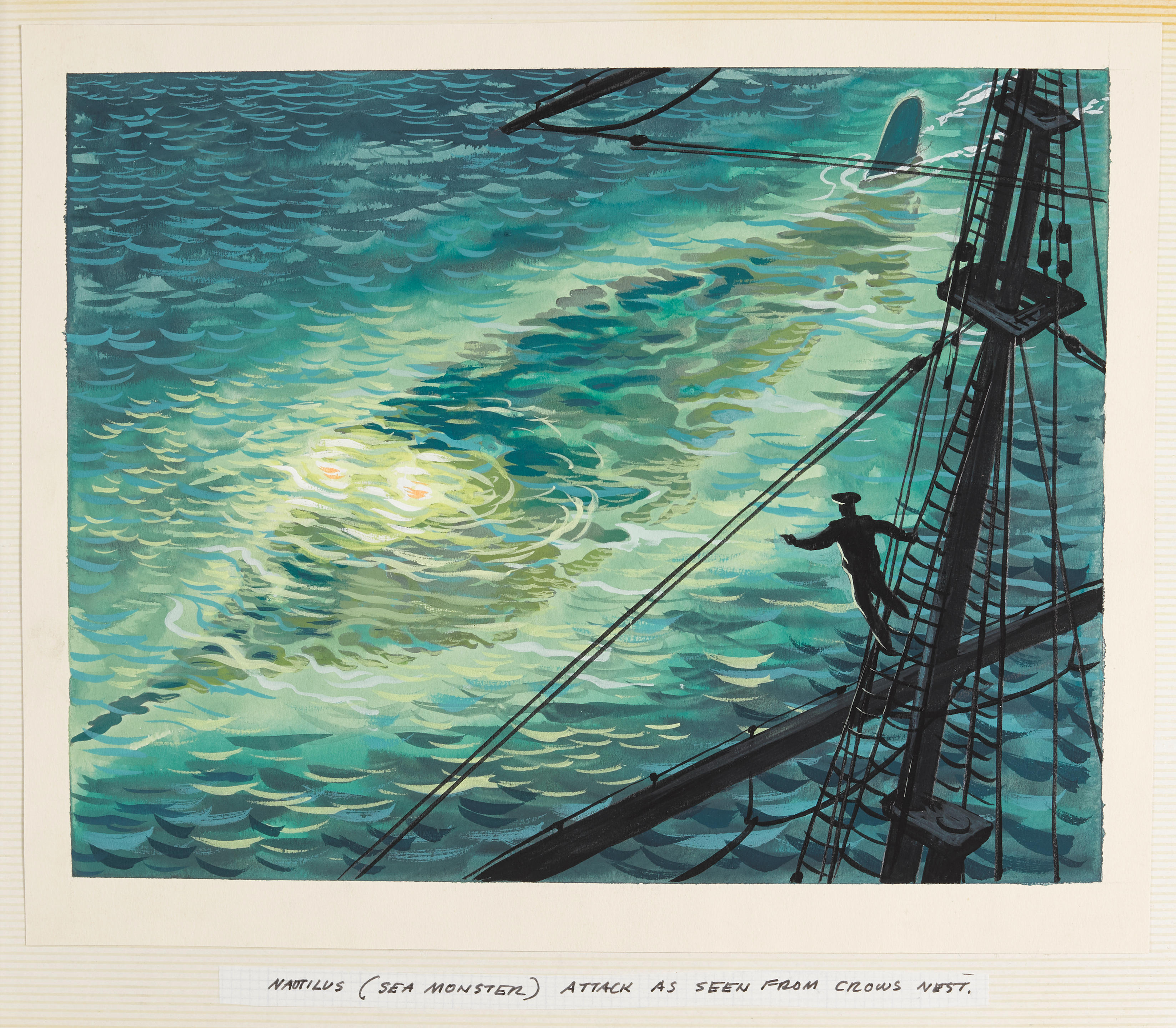 A Harper Goff scrapbook pertaining to 20 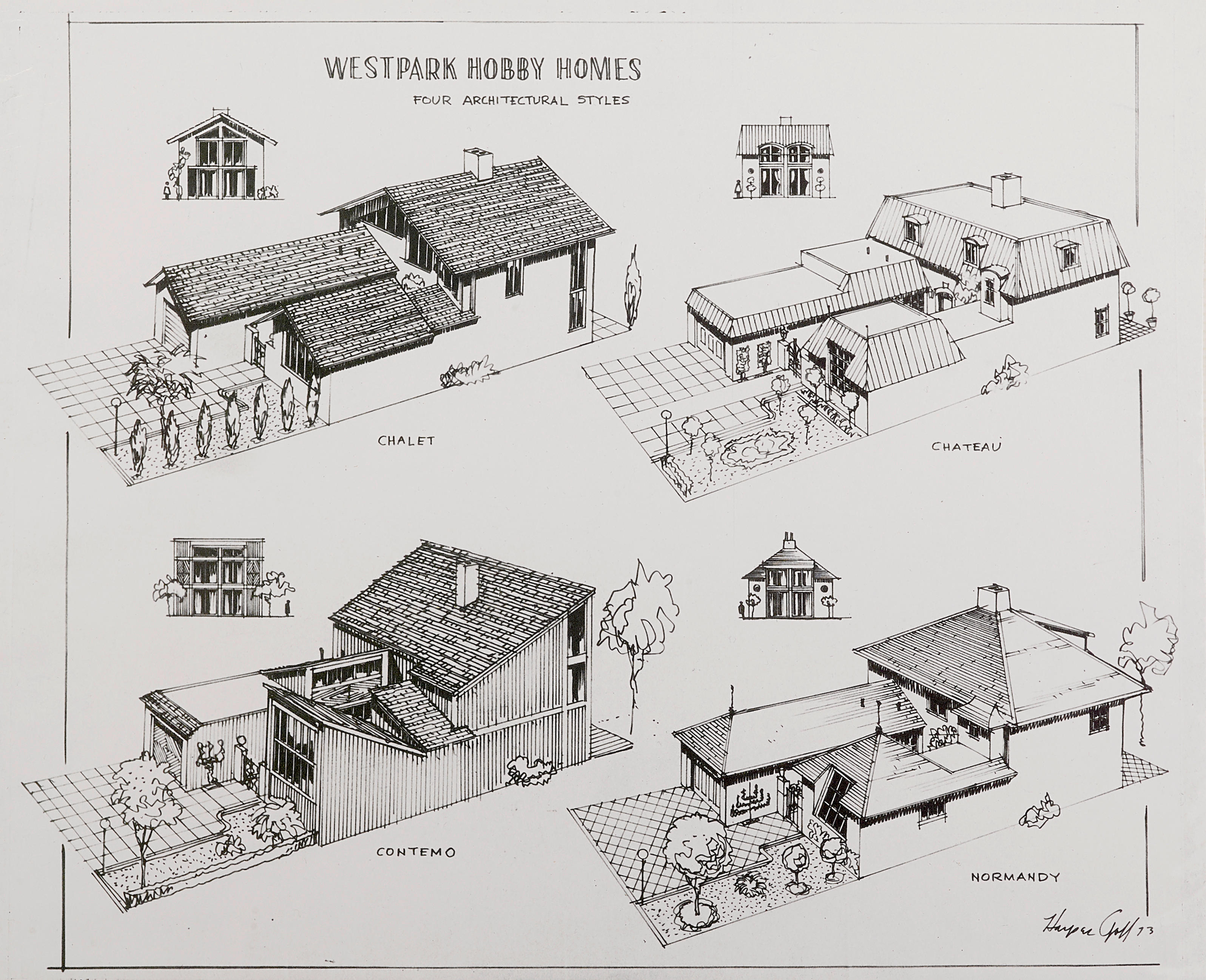 A large group of Harper Goff EPCOT and D 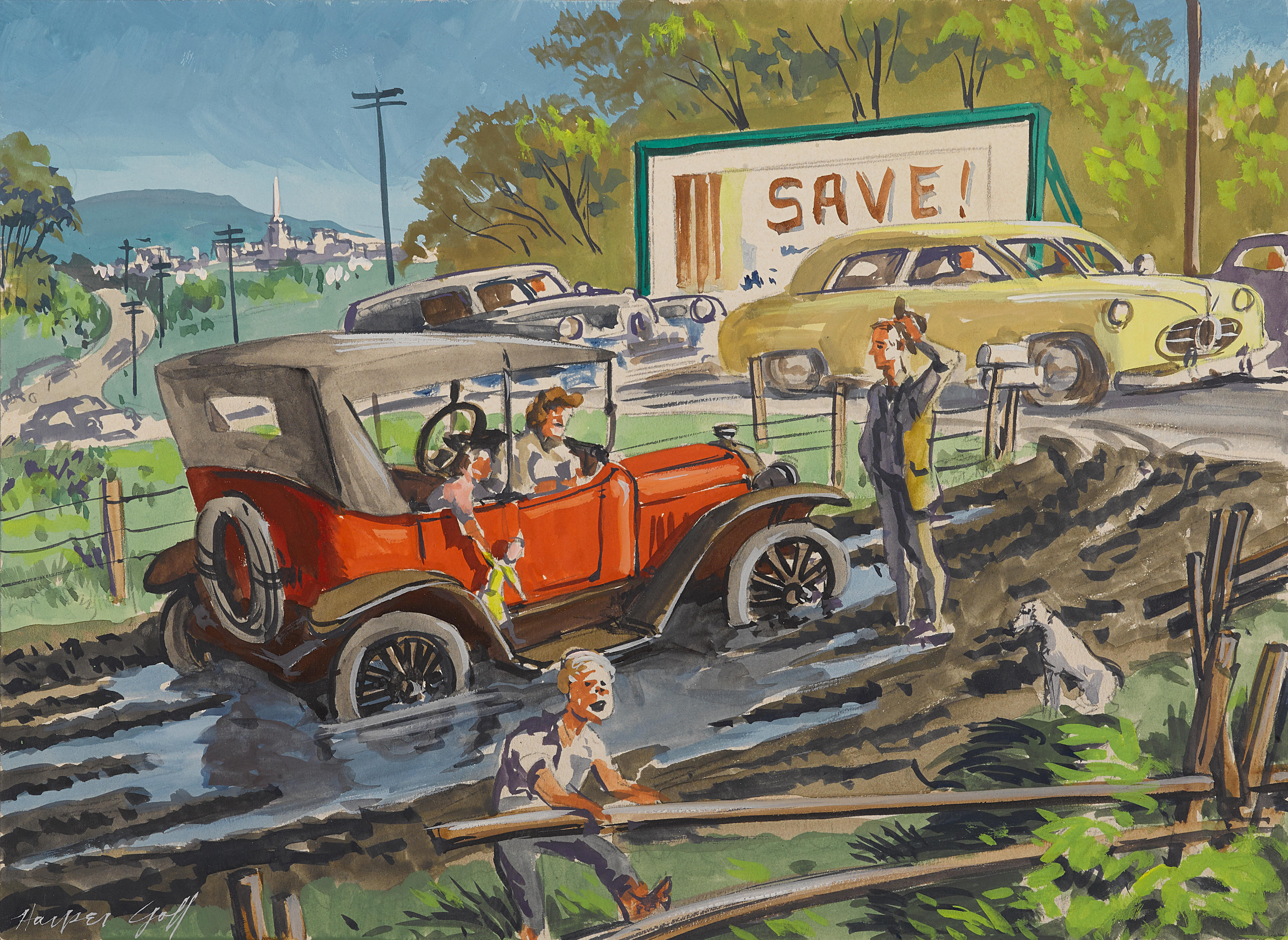 A Harper Goff-owned model replica of the