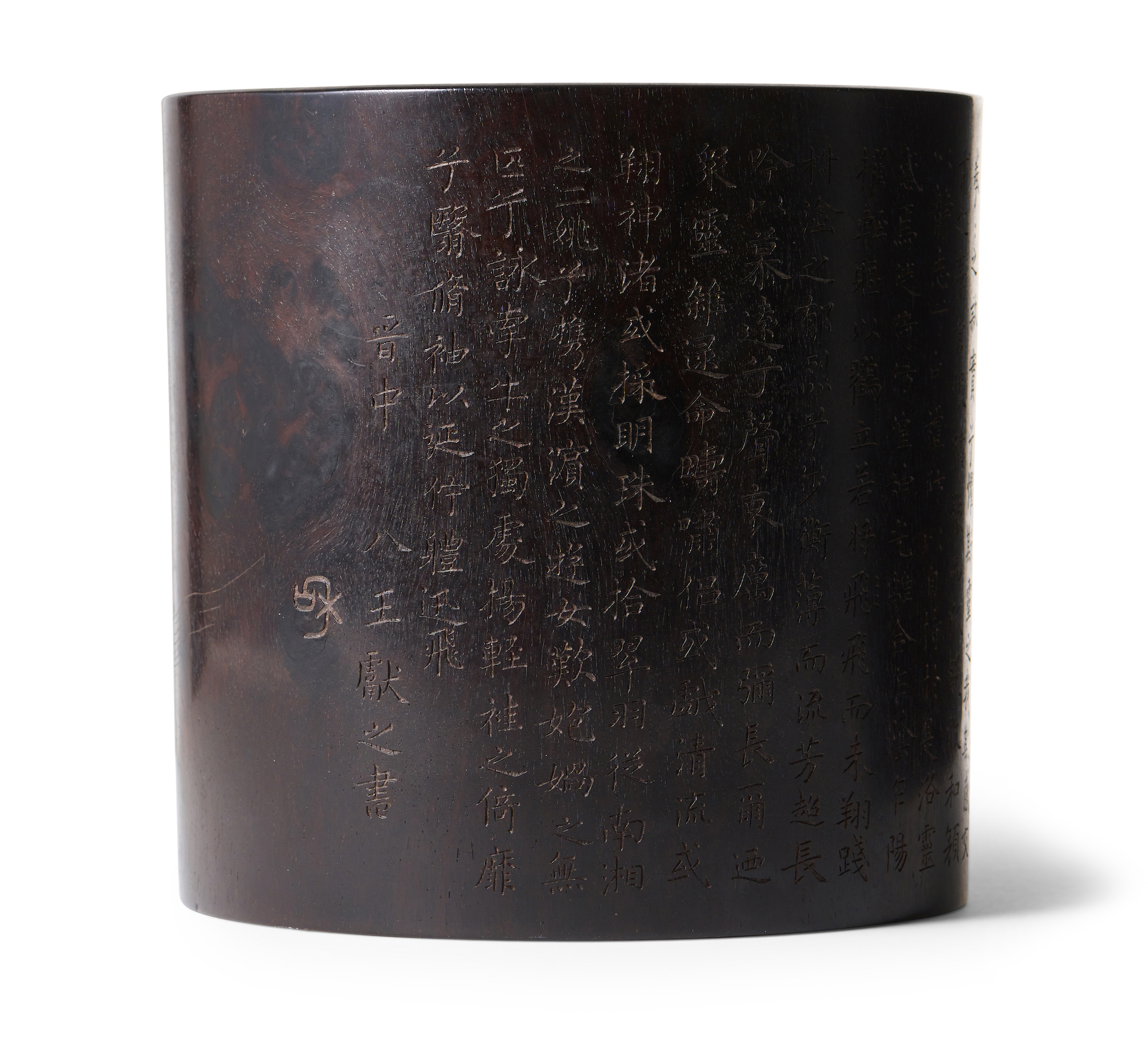 ♡ A RARE CHINESE INSCRIBED BURL ZITAN BRUSHPOT OR SCROLL POT REPUBLIC PERIOD (1912-1949) Of gently flaring cylindrical form, carved from a solid piece of burl zitan, with incised decoration to one side of the Goddess of the Luo walking on foamy waves, holding a feather in one hand, with robes billowing in the wind, and to the other side with a lengthy intaglio-carved inscription in regular script after Jin Dynasty calligrapher Wang Xianzhi. Four character seal mark to the base reading 'Curio of the Fang Studio'. Old collection label affixed to the interior base. 18cm high, 18.25cm diameter PROVENANCE: Commissioned by Cheung Yin/Cheung Yick Tung (dates unknown), Hong Kong. Collection of Wong Tse Ching (1886-1962). Given by Wong Tse Ching to Law Ming Shek in 1937. Collection of Law Ming Shek (1899-1940), and thence by descent. Law Ming Shek (1899-1940) was a wealthy Hong Kong and Canton entrepreneur and merchant, and an avid collector of Chinese books and antique curios, including scholar art, seals, ink stones, porcelain, and works of calligraphy and painting. His impressive collection registers reveal that he associated and exchanged collectables with such renowned Canton connoisseurs as "Wong Tse Ching" (a.k.a Wong Siew Chan/Wong Siew Chin) (1886-1962) and Luó Yuánjué (1891-1965). The scroll pot offered herein is one of numerous gifts the former bestowed on him. Much of Wong Tse Ching's outstanding collection was later donated, in 1956 and 1999 respectively, to the Guangzhou Municipal Culture Bureau and the Art Museum of the Chinese University of Hong Kong. OTHER NOTES: The inscription is a lyrical depiction from 223 or 224A.D. titled 'Goddess of the Luo', carved after a very famous calligraphic model by Jin Dynasty calligrapher Wang Xianzhi. The seal on the base was the collector's studio seal mark of Cheung Yin. The original seal was carved by the renowned Cantonese deaf-mute carver Yu Chung Ka. Estimate $5,000-7,000 Condition: Minor old wear, and some small and very fine age cracks. Otherwise no visible faults or damage The opinions expressed in the condition reports are a guide only and should not be treated as a statement of fact. Prospective buyers are encouraged to inspect articles for sale at our pre-sale viewing where Leonard Joel staff are available for advice. Leonard Joel makes no guarantee of the originality of mechanical or applied components. Absence of reference to such modifications does not imply that a lot is free from modifications. Absentee bid Telephone bid Bid on Multiple Lots Bid Live Online Request a condition report

A FINE AND RARE CHINESE BROWN AND POLYCH

A Fine and Rare Chinese Archaic Bronze I

The Extremely Rare Chinese Order of the 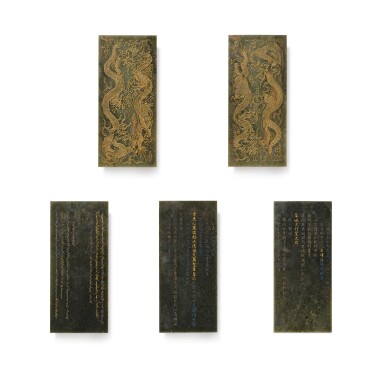