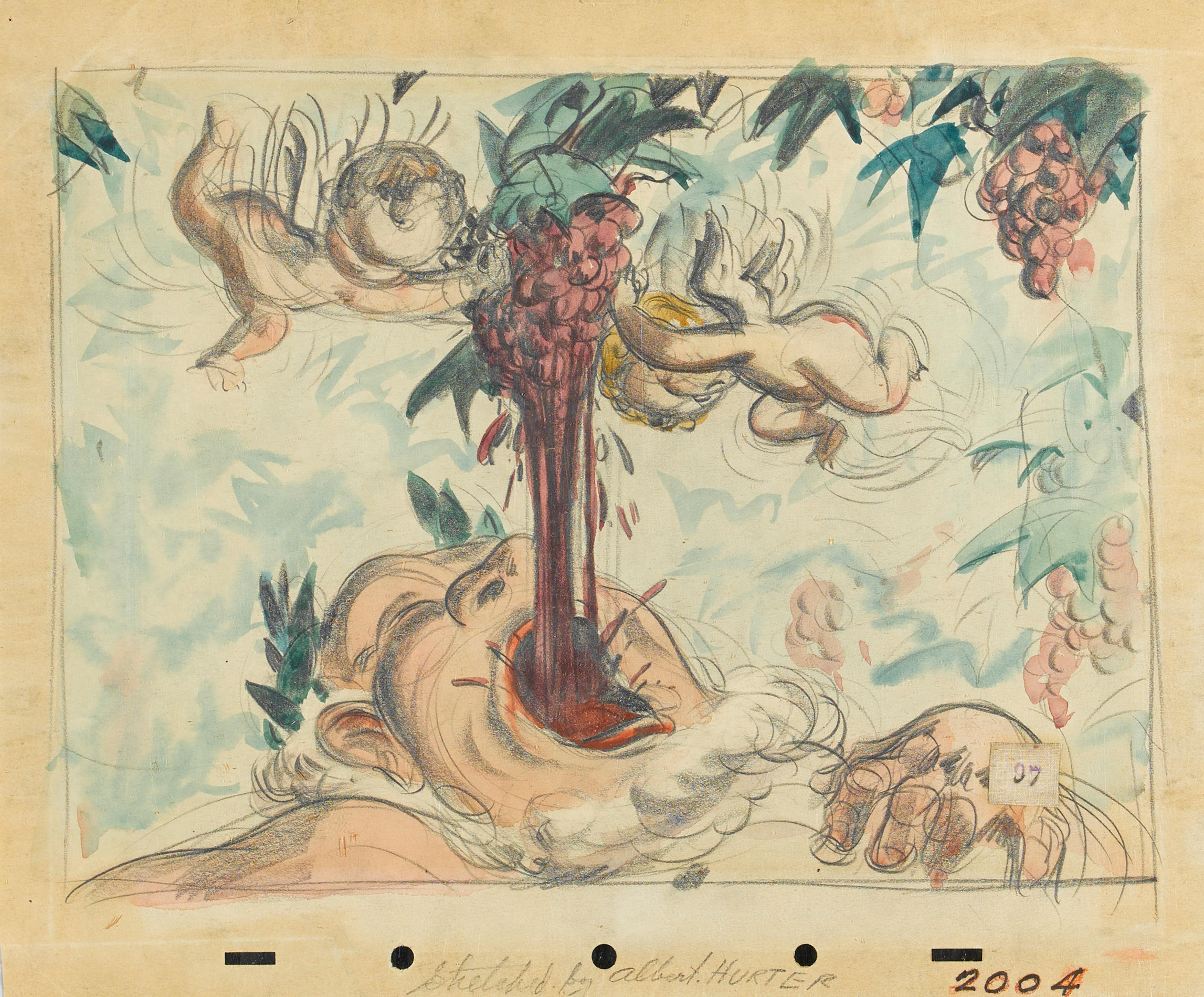 1940, graphite and watercolor on paper. Attributed to Albert Hurter, this very finished work of art depicts cupids squeezing the juice of the grape into Bacchus' mouth from the "Pastoral Symphony" sequence in the film, annotated at the bottom below the 5-peg holes "sketched by Albert Hurter//2004." This work of art attributed to Albert Hurter represents the most finished example of his work known to exist, and employs watercolor as opposed to previous sketches that utilized only graphite or colored pencil. Albert Hurter was a Swiss-born artist who, early in his career, had been an animator with Barre-Bower studio and worked on "Mutt and Jeff" during 1916-1918. Albert Hurter was respected for his drawing skills, his knowledge of art, and his fanciful imagination, and it wasn't long before he was considered the studio's top animator. On June 1, 1931, Albert Hurter was hired by Walt Disney. Hurter found himself in the right spot at the right moment in time – employed at the top establishment during the rise of the Golden Era of animation. Walt Disney used Hurter not as an animator but as an inspirational story sketch artist, in fact Disney's first inspirational sketch artist. Walt paid him to sit by himself all day and fill sheet after sheet of drawings to inspire Disney's other artists. He had a fantastic visual imagination which was usually expressed entirely in pencil sketches. Just a few of the Disney shorts he influenced include Babes in the Woods, Building a Building, The Three Little Pigs, The China Shop, The Goddess of Spring, and Music Land. When Walt began to plan his concert feature, Fantasia, he asked Hurter to do inspirational sketches for the Greek Mythology segments. The artist also worked on the "Night on Bald Mountain" sequence of the film, and the demon Chernabog was apparently Hurter's idea, according to director Dick Huemer. Further information on Hurter's contributions to Fantasia can be found in John Culhane's book Walt Disney's Fantasia (New York: Harry N. Abrams, 1983, p12-13). This inspirational sketch for the "Pastoral Symphony" segment in Fantasia is a very rare piece, and fills in an important part of the history of the animator Albert Hurter as well as that of the creation of the Disney masterpiece, Fantasia. 10 x 12 in.