An 18th Century Ivory Fan, the monture Chinese Export, with ...

Lot Description: An 18th Century Ivory Fan , the monture Chinese Export, with some quite unusual features to the carving. From the shoulder, the carving is designed in bands, quite geometrical, other than the horizontal band at the shoulder, and the curve and quasi heart shape lower down the gorge. The double leaf, in pale yellow, has a central cartouche, engraved and lightly coloured en grisaille, with a detailed image of an 18th century lady tenderly gazing at her young child. The scene is bordered with small sequins, which are also a feature of painted swags to the top of the leaf, alternating with small colourful painted flowers. Together with An 18th Century Ivory Fan, French , the cream silk leaf painted with figures in fine and extravagant 18th century costume, the central cartouche a colourful depiction of a lady and her suitor at the altar of love, with two white doves, a lady's companion observing. The suitor appears to be leaning on a sheep, to his right. To the left, an oval vignette featuring a musician wearing a powdered wig, breeches and a long coat. To the right, a lady in virginal white open robe, large plumed hat, wistfully gazing into nowhere. Decorative urns full of flowers, and tasteful side borders with scrolling and classical objects fill the reserves. Gold sequins border all three painted scenes. The verso, a fine gauze, is plain. Guard length 11 inches or 28cm; and A Third Fan, 18th Century French , the cream silk leaf mounted on bone and painted very classically with an urn, flowers spilling from the top, other flowers including bright parrot tulips to the reserves, and further decorated with swags of small gold sequins. Simple monture lightly gilded. The verso is plain, note initials in ink to the left, possibly CJE/MD. Guard length approx. 11 inches or 28cm (3) Condition Report: . The first fan has replaced upper guards, being more European figurative than Chinese Export. Some general soiling, seen from the verso. Well executed facial features. The second fan has been framed, probably due to the delicate state of the silk, the gauze backing seen to have losses, and lots of repair has been undertaken. The third fan has damage and repair to the leaf, the clear tape now yellowed. The gilding is dull. ARR: Categories: Fans 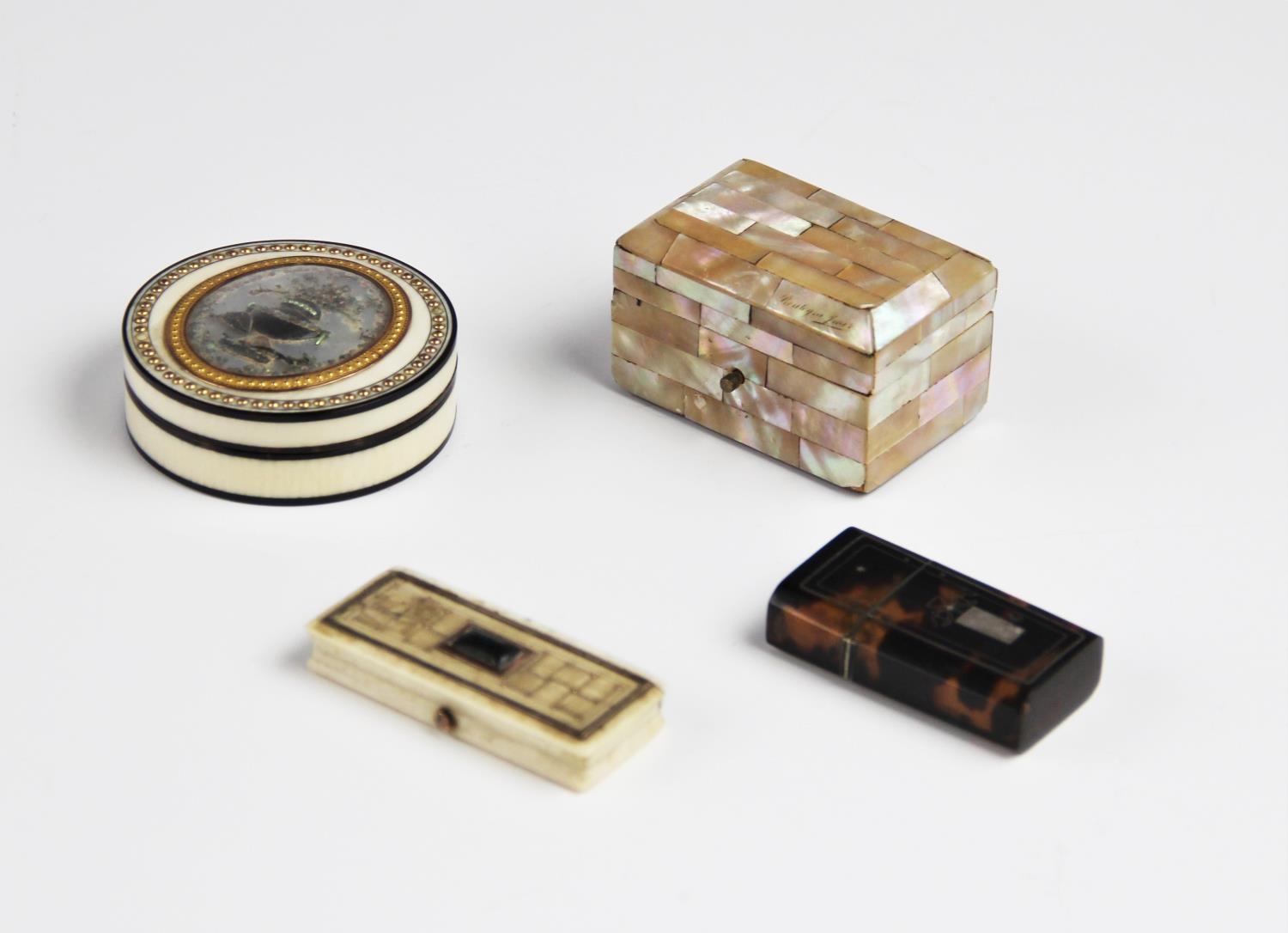 An 18th century ivory snuff box with can

An 18th-Century ivory and brass protract