Katalognummer: CA0919-048 AN EXTREMELY RARE GILT-BRONZE FIGURE OF MANJUSRI, TIBET 14TH CENTURY The bodhisattva is finely cast seated in vajraparyankasana on a double lotus base. His hands in gesture of dharmachakra mudra holding the tips of lotus stems bearing his attributes, the sword, khadga, on his right shoulder, and the book, pustaka, on his left shoulder (the book lost). Provenance: From the collection of Alexander Popov in Novi Sad, Kingdom of Serbia, acquired between 1900-1920. A copy of an old black and white photo, dating to early 1930s, with the collector’s cabinet, and the present statue within, is accompanying this lot. Condition: Magnificent condition with wear and a few casting imperfections and nicks. The book lost. A copper plate marked with a double vajra is evidence of this sculpture’s formal consecration and appears Alexander Popov, ca. 1920 to be the original seal, although it shows an old repair. Some of the many inlaid gemstones and glass beads are lost, most of the remaining ones are original, a few may be later replacements. Weight: 6.8 kilograms Dimensions: Height 37.1 cm This accomplished and substantial sculpture is cast in the graceful manner of the Nepalese artistic tradition, probably at the Newar ateliers of the Kathmandu valley. Limbs are muscular and rounded, the shoulders broad, fingers are long and elegant, and the bodhisattva is imbued with spiritual calm and poise. The fire gilding, the Newar craftsman’s forte, is lustrous and of subtle hue. Moreover, a few of the inlays are made of glass with a garnet tone, a type of inlay typically associated with Nepalese works. The 14th century saw a considerable expansion in the building and extension of Tibetan monastic establishments, and records confirm the employment of Nepalese artists and craftsmen in their construction and decoration. Due to the liberal use of turquoise, as well as the very little remnants of blue pigment in the hair, it is probable that this figure was commissioned for a Tibetan patron. The prowess of the Newar artists was internationally recognized. In 1260 the Mongol emperor Khubilai Khan (1215-1294) commissioned a memorial stupa to Sakya Pandita (1182-1251) to be erected at Sakya monastery in Tibet. Phagspa (1235-1280), the Sakya hierarch and Khubilai’s imperial preceptor, summoned a group of some eighty of the best artists in Nepal to fulfil the charge. Aniko (1244-1306), the group’s leader, was a precocious talent as an architect, weaver, painter and sculptor, and so impressed his sponsor that Phagspa recommended his talents to Khubilai. Aniko was embraced by the emperor and rapidly elevated to prestigious posts. Amongst many honors he was appointed Supervisor-in-chief of All Classes of Artisans, and later Minister of Education in charge of the Imperial Manufactories Commission, responsible for the court’s supply of precious materials such as gold, pearls and rhinoceros horn. Official documents of the Mongol dynasty record Aniko’s biography, and describe monuments, Buddhist sculpture, painting and textiles made to his design, see Karmay (Stoddard), Early Sino-Tibetan Art, Warminster, 1975, pp. 21-24. He was awarded great wealth and status at court. Aniko’s arrival at the Mongol court with twenty-four fellow Newars established a Nepalese presence in the Chinese Imperial workshops that would last for centuries. They brought an invaluable familiarity with Himalayan Buddhist iconography when Tibetan Vajrayana Buddhism became the state religion of the Yuan dynasty, and a renowned ability to adapt to the artistic traditions of a sponsor. Yuan period Chinese works of art that reveal Nepalese influence include a statue of a bodhisattva in the Freer Gallery that is a done in the uniquely Chinese medium of dry lacquer, but with pronounced Newar style in the sculptural detail, ibid., p. 22, pl. 11. An imperial Vajrabhairava mandala in kesi, a favored medium of the Mongol court, is drawn in the Newar style seen in Tibetan paintings a 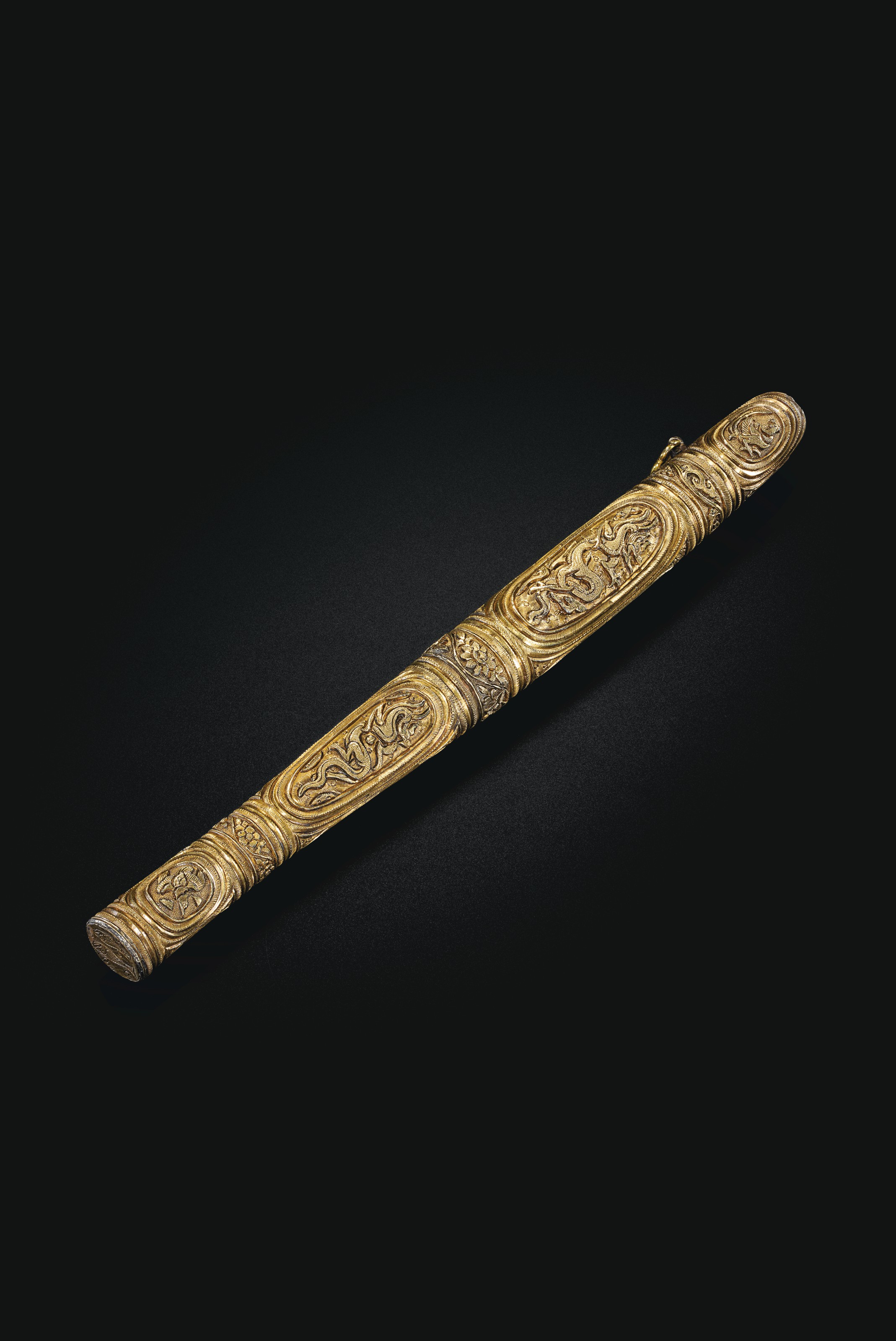 AN EXTREMELY RARE PAIR OF PAINTED AND GI