An Important Boer War Officer Casualty Group of 4 awarded to Captain Gilbert Macdonald Stewart, 2nd Battalion Lancashire Fusiliers, killed in action at Spion Kop, comprising: Queen’s Sudan Medal, 1896-98 (Lt G. M. Stewart. 2/ Lan: Fus:), Queen’s South Africa Medal, 1899-1902, second type reverse, single clasp, Relief of Ladysmith (Capt G. M. Stewart. Lanc: Fus:), Khedive’s Sudan Medal, 1896-1908, single clasp, Khartoum (Lieut. G. M. Stewart), Coronation Medal 1901, first and third medals engraved in typical upright capitals, second medal officially impressed, the latter unnamed as issued, medals mounted singly within frame for display. Group toned, extremely fine, and a highly-desirable officer’s casualty group for Spion Kop. (4) Captain Gilbert McDonald Stewart was born in Windsor, Berkshire, on the 4th of February 1873, the fifth son of Robert Stewart of Port Elizabeth, South Africa, based in Sydenham, London. He educated at Dulwich College, South London, before attending the Royal Military College, Sandhurst. He was commissioned as Second Lieutenant into the 2nd Battalion Lancashire Fusiliers in February 1893, and shot for the Army in 1895, when he was also promoted to Lieutenant. He served during the occupation of Crete and then in the Soudan Campaign in 1898, being present for the Battles of Omdurman and Khartoum. He was promoted to the rank of Captain on the 9th of October 1899 and served in South Africa during the Boer War. After the losses and disappointments of ‘Black Week’ in December 1899 when British losses had continued to rise, the British and Colonial troops hoped to make a concerted effort to outmanoeuvre the Boer forces which had held Ladysmith, Mafeking and Kimberley besieged. Attempting to make a two-pronged encirclement of Boer forces on the Tugela River, thus clearing the way to Ladysmith, the forces under General Sir Redvers Buller VC proceeded to the easterly flank, and those under General Sir Charles Warren took the westerly flank towards the crossing point at Trikhardt‘s Drift. Met by Boer forces on the facing hill crest of Thabanyama, a bombardment and subsequent infantry attack by Warren’s forces was easily repulsed by the entrenched Boer troops, and Warren looked toward taking the great hill of Spion Kop to allow him to turn the Boer flank. He ordered the hill to be taken on the night of the 23rd, where a lightly-equipped force of 1700 men led by Major General Woodgate, comprising eight companies of the 2nd Battalion Lancashire Fusiliers, six of the 2nd Royal Lancasters, two of the 1st South Lancashires, one-hundred and eighty men of Thorneycroft's Mounted Infantry, and half a company of Sappers, slowly climbed the hill and cleared a Boer piquet which was taken completely by surprise, and they began with difficulty to entrench their rocky position. Once daylight had broken on the morning of the 24th, their mistake was realised, as the British & Colonial troops discovered to their cost that they had only cleared the first part of Spion Kop, and that a larger Boer force remained at its true summit, and furthermore, Boer troops and artillery commanded three further opposing hills, bearing down on their position. Boer snipers and shelling wrought havoc on the British troops below, and fearing for their own reasons that the British would take and hold this tactical position, and charge was launched by some 300 burghers of the Pretoria Commando, with their Mausers and hunting knives, where brutal hand to hand fighting ensued, resulting in an exhausted stand off for both sides, as the shelling resumed upon the British. Major-General Woodgate was killed by shrapnel, and soon after other senior officers including Colonel Blomfield of the Lancashire Fusiliers, fell in quick succession, the latter severely wounded. Colonel Malby Crofton of the Royal Lancasters, who was totally overwhelmed by finding himself in command, managed to semaphore for help from the hill, pleading: “Reinforce at once or all is lost. Ge

The Important K.C.B. Group of Twelve to

A Highly Important Group of Orders and M 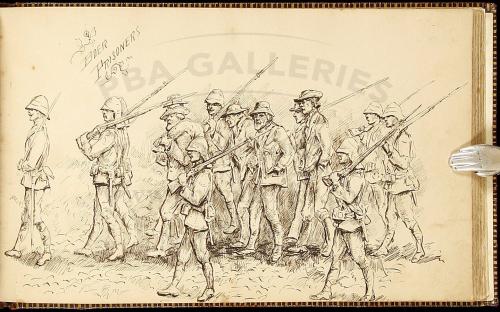 The AA Upfill-Brown Collection An import

It was my great good fortune to be appoi