An Important jewelled gold and enamel double-opening oval snuff box with timepiece and musical automaton, the cuvette engraved Decombaz & Rich/ London, the case with incuse maker’s mark (?) II over IB, possibly Jean Jacques Isaac Bellamy, Geneva, circa 1800, the lid centred with a timepiece with a white enamel dial, Roman numerals and Breguet-type hands, flanked by two smaller apertures revealing Catherine wheels over enamelled discs decorated with curving paillon bands, the border with twenty-four subsidiary apertures and spiralling wheels, the reserve enamelled in translucent royal blue, the inner border edged with silver paillon swags, the outer with sprays of blue and red taille d’epargne enamel, the wheels, larger apertures and rim set with rose diamonds, the side with vertical divisions pierced and enamelled with urns and scrolls, the base painted en plein with an oval vignette of an Arcadian couple out hunting with their dogs, gold paillon frame, the enamel reserve with silver paillon border, the box opening to reveal a high quality oval enamel, diamond and sapphire musical movement, with fourteen diamond and sapphire Catherine wheels to rim, two large Catherine wheels at each end The high quality gilded automata fusee mechanism having a finely engraved open plate, cocks, barrell and pin drum: the fusee mechanism supplying power to the pin cylinder activating polished steel tapered hammers striking a carillon on five bells, at the same time activating the diamond automata Catherine wheels, all finely executed with highly polished steel work and blued steel screws throughout; the musical and automata mechanisms activated by a start lever concealed under the front rim of the lid, connecting to a rise and fall crown wheel in the mechanism; the mechanism is suspended on four blued steel struts, secured by screws on the inside of the box The timepiece by Decombaz & Rich, London, with white enamel dial, black Roman numerals, black Arabic quarter minute index and gold Breguet style hands with crescent tailed centre seconds hand, with a fine Swiss cylinder movement, with open plates, posted barrel with unusual stopwork, the cuvette further engraved: To Wind up to the Right/ To turn the Hands, 8.8cm wide, In a later red leather case stamped Dose/ Jerome Napoleon The names Louis Decombaz and John Rich are among those linked with the production of the musical automata that flourished in Geneva at the end of the 18th and the early years of the 19th centuries in the wake of the extraordinary innovations of Pierre and Henri-Louis Jaquet-Droz, father and son, in the 1780s. Jaquet-Droz senior died in 1790, and his son died prematurely the following year. Their business was continued by Jean-Frédéric Leschot, Pierre’s adopted son, who worked with Jacob Frisard, another master of mechanical music and automata. Despite the upheavals caused by the French Revolution, as well as a lesser revolution in Geneva in 1792 and the constant struggles of international trade, the creation of high calibre works went on in Geneva, with others challenging the innovative reputation of the Jaquet-Droz Leschot workshops. Among these was the partnership of Decombaz and Rich, which was registered on 7 Germinal An 7 (27 March 1799) and dissolved on 22 Vendémiaire An 14 (14 October 1805). Louis Decombaz was recognised ‘bourgeois de Geneve’ in 1785 and was an inspector of the Corps des horlogers. He supplied movements to his friend Abraham Breguet in Paris, and helped the great watchmaker when he fled to Geneva during the Terror. Later, Decombaz’s montres a repetition were among the Swiss works sent to a major exhibition organised by Napoleon in Paris in 1806. His partner John Rich was an English watchmaker and mecanicien, whose nationality would certainly have been seen as an asset in establishing a foothold in the lucrative London market. This snuff box is similar in form and mechanical movement, although not in details of decoration, to another in the Jaquet- 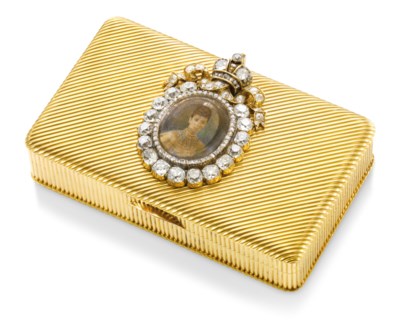 AN IMPORTANT JEWELLED AND BRONZE-MOUNTED 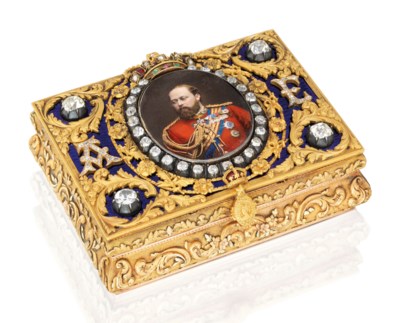 An important and rare jewelled gold and