An Impressive Boer War, Great War and WW2 LGSC & MSM Group of 8 awarded to Company Sergeant Major Frank Gilbert, Royal Engineers, mentioned in despatches in 1901, comprising: Queen’s South Africa Medal, 1899-1902, 2nd type reverse, 2 clasps, Belmont, Modder River (23955. Serjt: F. Gilbert. R.E.), 1914-15 Star (52840. C. S. Majr. F. Gilbert, R.E.), British War and Victory Medals, 1914-1920 (W.O. Cl. II.), Defence Medal, 1939-1945, Army Long Service and Good Conduct Medal, EVIIR (23955 C. S. Mjr: F. Gillbert. R.E.), Special Constabulary Long Service Medal, GVR (Frank Gillbert), Army Meritorious Service Medal, GVIR, for Meritorious Service (23955 W.O. Cl. 2. F. Gilbert. R.E.); the first officially engraved in slanting capitals, regiment possibly re-engraved after contact and wear, the fifth unnamed as issued, remainder officially impressed, medals swing mounted on card for display. Group somewhat unevenly toned, about very fine. (8) ex Moss Collection, New York Frank Gilbert was born in c.1868 in Bridford, Devon - the son of William and Mary Jane Gilbert. He enlisted for service with the Royal Engineers in July 1889 as a Sapper, giving his trade like his father, as a Plumber. He served at home until the end of 1890 then 6 years in Gibraltar followed by 2 years in Ceylon before returning home then embarking for South Africa in October 1899. He spent 8 months in South Africa and returned home in June 1900. While serving in the Boer War, he was mentioned in despatches in Lord Roberts' despatch 4 September 1901, as Corporal. He was attached to the 31st Fortress Company under Captain Frank Fuller, which was principally involved in protecting the railways and restoring and rebuilding bridges and other railroad structures damaged by the Boers. He returned to South Africa in 1904 before returning home for the final time in 1907. During this time, he was promoted to Corporal on Nov 1, 1895, Sergeant Jan. 1, 1900 and CSM Oct 26, 1904. He married Hannah Louise Connelly in Gibraltar on Jan 20, 1894 and their first child, (Mary) was born later that year. She died 9 months later. In the 1901 census, he was found to be living in married quarters at Tedworth with his wife and in 1902 he fathered another daughter Beatrice May. He was awarded the LS & GC in 1908 and in 1909 became part of the Balloon School. He was discharged 29 July 1910 after serving 21 years. Gilbert was recalled for WWI service in 1915 and was made Company Sergeant Major of the 95th Field Coy; serving with the 7th Division in France and Flanders, at Loos, Albert, Bazentin, Delville Wood, Guillemont, Polygon Wood, Passchendaele, and in Italy at the Asiago River and Piave. He died 7 November 1952. His MSM awarded under the terms of Army Order 98 of 1953 without annuity. The QSA appears to be partly re-engraved "RE" and named Gilbert, The MSM is named to Gilbert and the remainder to Gillbert. Sold with a quantity of accompanying paperwork, roll mentions and research, showing both spellings of his name in use.

An Impressive Boer War and WWI DSO and ‘

A rare and impressive Boer War “Black We 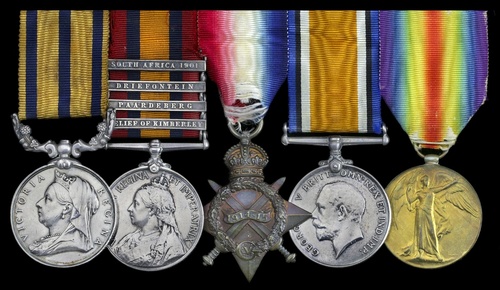 (x) The impressive and well-documented '

The well-documented Q.S.A. awarded to Pr

(x) Sold by Order of a Direct Descendant