Arthur Heygate Mackmurdo (1851-1942), a very important oak chair, with an Art Nouveau floral back, 99cm high (lacking the seat) Mackmurdo's influence in Europe is recognised as the earliest forms of Art Nouveau particularly in the styling of his chair-back (1882) and in the title page for Wren's City Churches a year later. The present chair was possibly designed for Pownall Hall, the Century Guild's most important commission, and stands firmly alongside the Wren's City Church poster of 1883 and the earlier chair of 1882. This then can only add weight to this already mighty precursor of Art Nouveau, which certainly did not start out as humble beginnings in the mind of Mackmurdo but flourished and grew from within him and throughout his working career. This is one of the three most important pieces produced that undeniably predict Art Nouveau and set the fashion that went on to explode throughout Europe not only in furniture design but also in architecture, metalwork, ceramics and glass: a sinuous explosion flooding through the veins of the young designers who were emerging in France, Belgium, Prague, Italy, Spain and the rest of Europe at the turn of the century. Identical chairs to the present lot were used in the furnishing of Rainhill, a house designed by Edmund Rathbone whose brother, Harold Rathbone, founded the Della Robbia Pottery factory in 1894. See Cooper, Jeremy 'Victorian and Edwardian Furniture and Interiors' p. 199, illus. 516 and page 198 illus 514 for it and the comparable example of 1882. 1851. The Great Exhibition and the birth of Arthur Heygate Mackmurdo The son of a wealthy chemicals manufacturer, he was educated at Felsted School in Essex, and went on to start his architectural designing career articled for short time to T. Chatfield Clarke before entering the office of James Brooks in 1869. Later in life Mackmurdo credited the value of the example of methodical thoroughness set him by Brooks. At Oxford in 1873 he attended lectures by Ruskin whilst studying at the Ruskin School of Drawing who had an enormous influence on the young Mackmurdo. The following year he found himself in Florence which was an awakening feast to his artistic thirst for knowledge. All his early training had been in Gothic Architecture and Florence was nothing less than a revelation. He fell passionately in love with the Renaissance something that stayed with him throughout his lifetime and so set the seeds of Art Nouveau. He met William Morris in 1877 who inspired further his keen interest in the applied arts. He set up his own architectural practice at 28 Southampton Street, London and in 1882 he founded 'The Century Guild' to produce decorative work in every field of interior design and 'to render all branches of art the sphere no longer of the tradesman but of the artist, it would restore building decoration, glass painting, pottery, wood carving and metalwork to their rightful place beside painting and sculpture'. His associates in this venture were Selwyn Image, Herbert Home, Heywood Sumner, Kellock Brown, Benjamin Creswick, George Esling, Clement Heaton and William De Morgan. They complimented each other enormously with an impressive array of artistic skills. The Guild's products included furniture, stained glass, metalwork, fabrics and wallpaper. This was to include the magazine, 'The Hobby Horse', which first went on sale in 1884, and was printed at the Chiswick Press and beautifully illustrated with woodcuts by Selwyn Image and Herbert Home. The Guild's first exhibition was at the Health Exhibition in London also in 1884, though fame and recognition didn't arrive until they exhibited again at the Liverpool International Exhibition in 1886. Mackmurdo's architectural work included the Savoy Hotel (1889), a house in Chelsea for the artist Mortimer Menpes (a stunning Japanese-style interior) and Pownall Hall. He married Eliza D'Oyly Carte and moved to Wickam Bishops in Essex at 51 where he built his home Great Ruffins, he retire

Arthur Heygate Mackmurdo and The Century 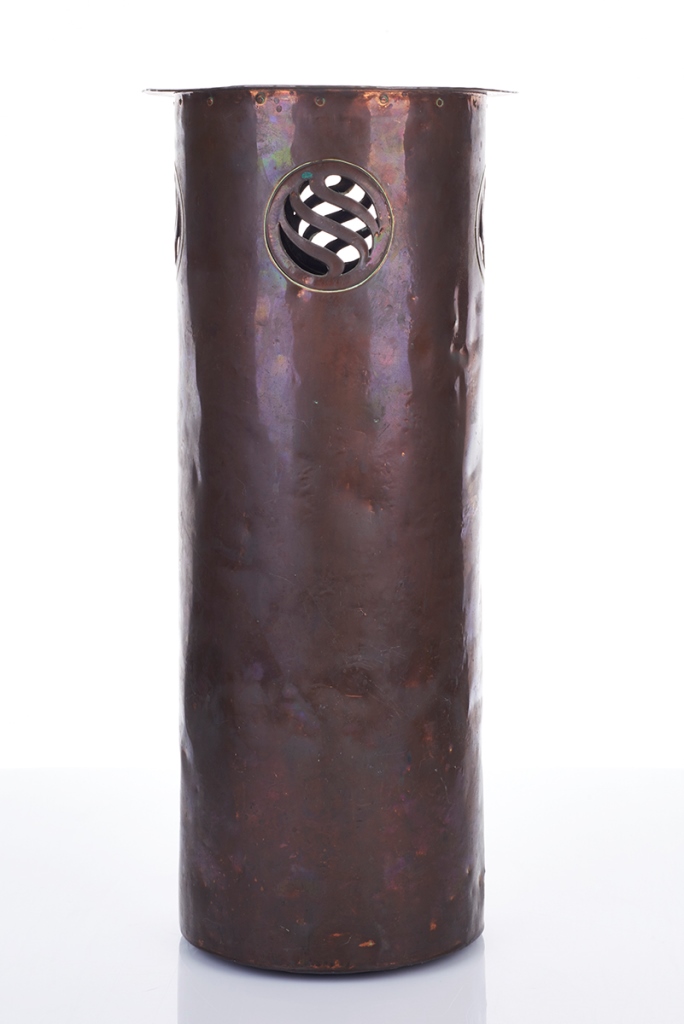 An Arts and Crafts coromandel and inlaid