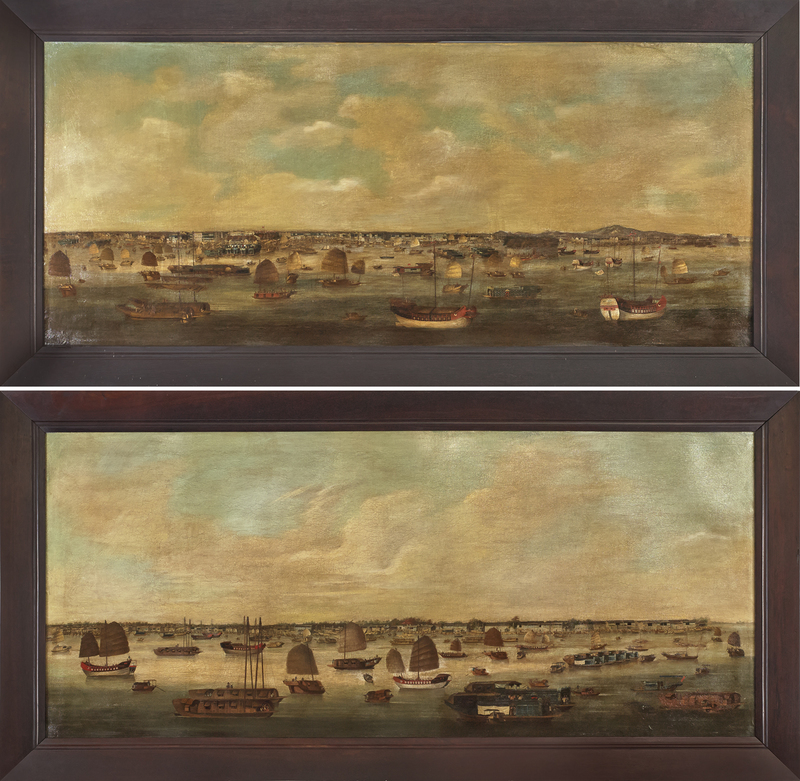 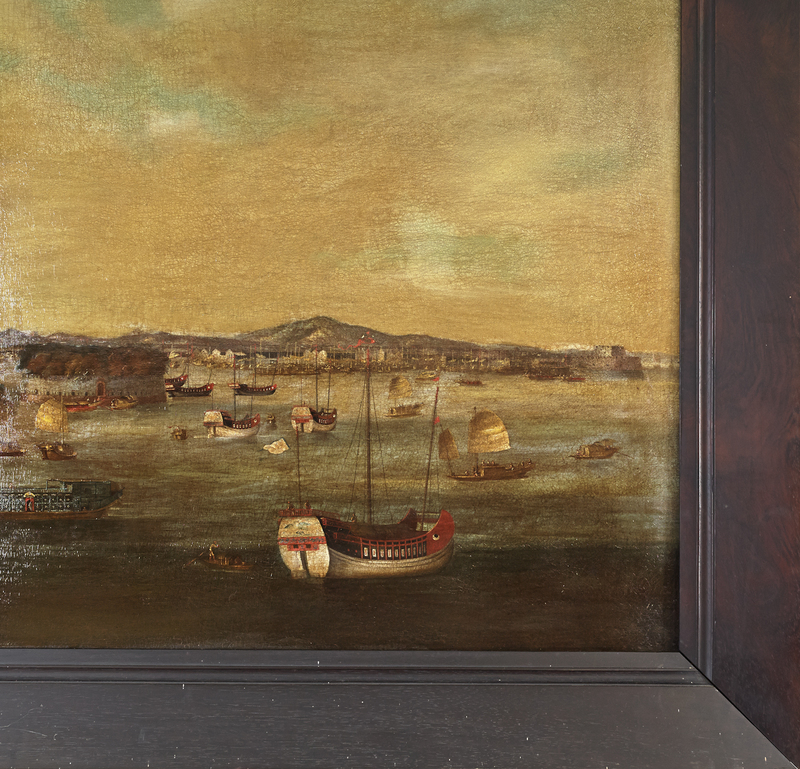 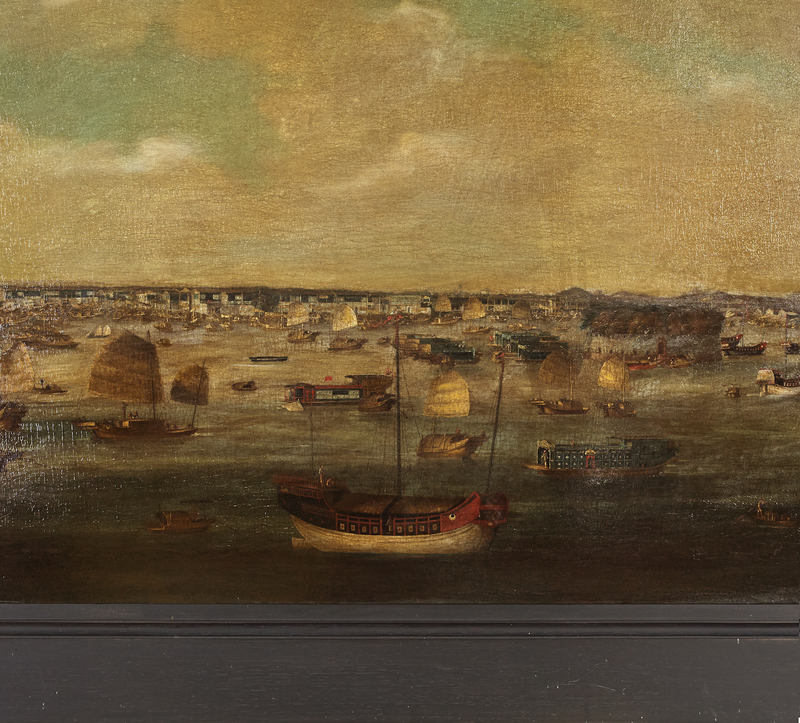 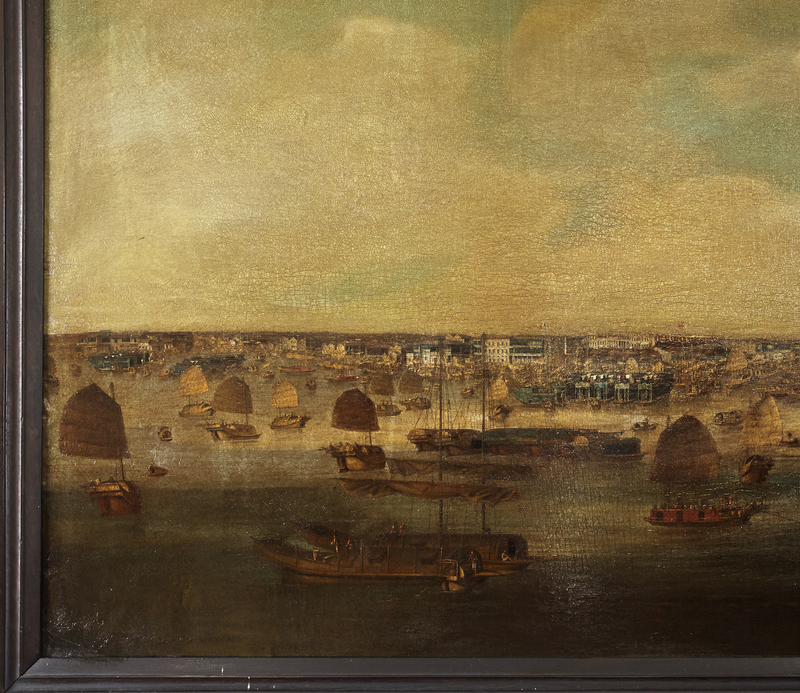 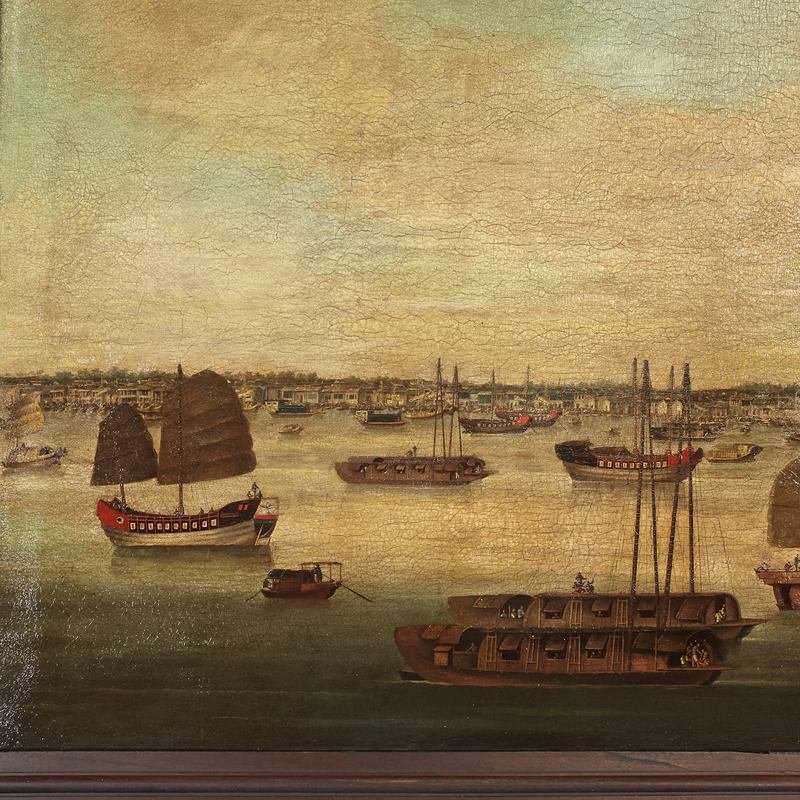 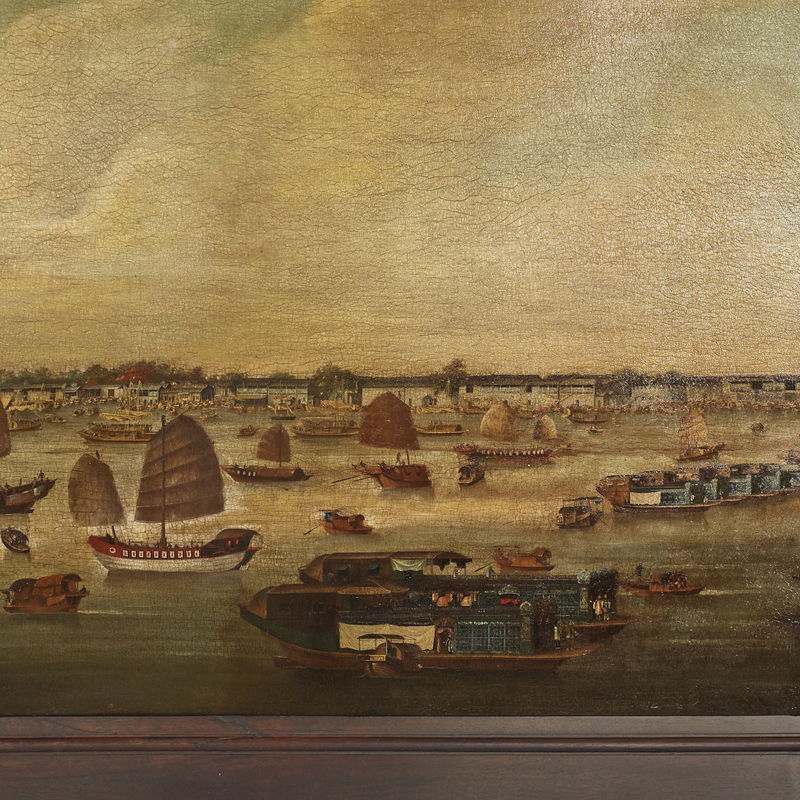 Attributed to Youqua (Chinese, active mid 19th c.), pair of monumental China Trade oil on canvas panoramic landscapes, ca. 1840, the first depicting the Hongs at Canton with a bustling harbor scene in front displaying hundreds of Chinese boats and the stone folly fort, in the distance on the right is the flowery pagoda and the five-story watchtower, the only buildings that survive to this day. The second work shows the opposing shore of the Pearl River and the island of Honam. Similarly painted with a plethora of Chinese ships with figures busying themselves. These newly discovered works stand at the pinnacle of China Trade views. At 35" x 80" they are the largest examples known and rival any in their fine detail which is still visible under layers of old varnish. Both retain their original solid rosewood frames. A nearly identical example of Canto (Guangzhou) by Youqua is in the collection of the Guangdong provincial museum and measures a slightly smaller 33 1/2" x 78". Also a related pair depicting Canton and Hong Kong is at the Peabody Essex Museum, 31 1/2" x 72 1/2". Condition: Honam - original frame and stretchers, two vertical supports added to stretcher, surface is very dirty, expected allover craquelure, small touch-ups along right edge, repaired puncture in water bottom right, a few touched up scratches to top left corner. Canton - original frame and stretcher, two vertical supports added to stretcher, relined, surface is very dirty, expected allover craquelure, top edge trimmed with 1/4"-1/2" touch-up along edge, touch-up to top right corner, touch-up to 5" and 2" scratches in sky left of middle, areas of sky have thin wash applied to lessen appearance of craquelure, craquelure does not appear to be heavy and should not detract from painting once wash is removed. All restoration was done approximately 60 years ago and is visible with the naked eye. Provenance: The Collection of Captain Hall Jackson Tibbits (1797-1872), Long Island, NY. 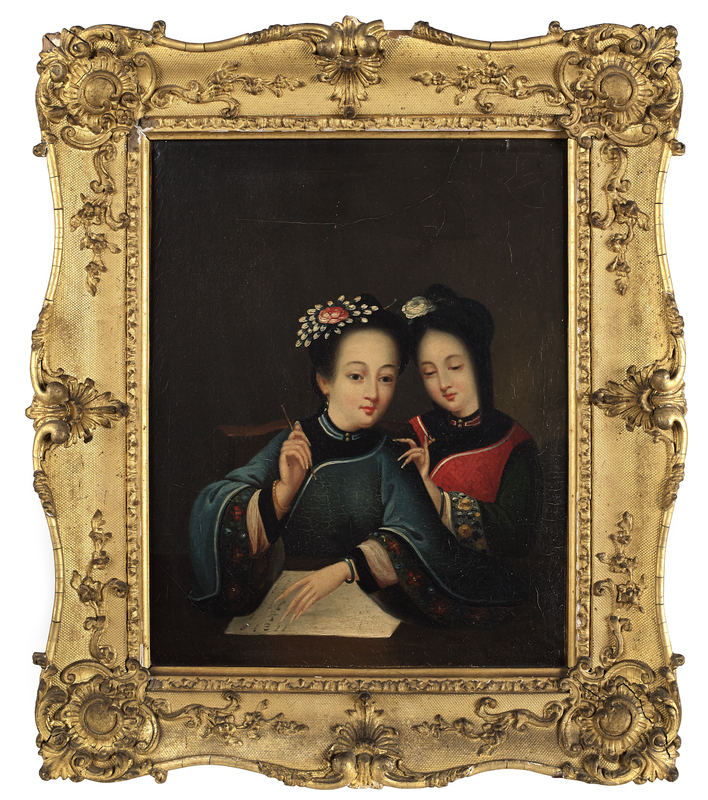 ATTRIBUTED TO YOUQUA (ACTIVE CIRCA 1840- 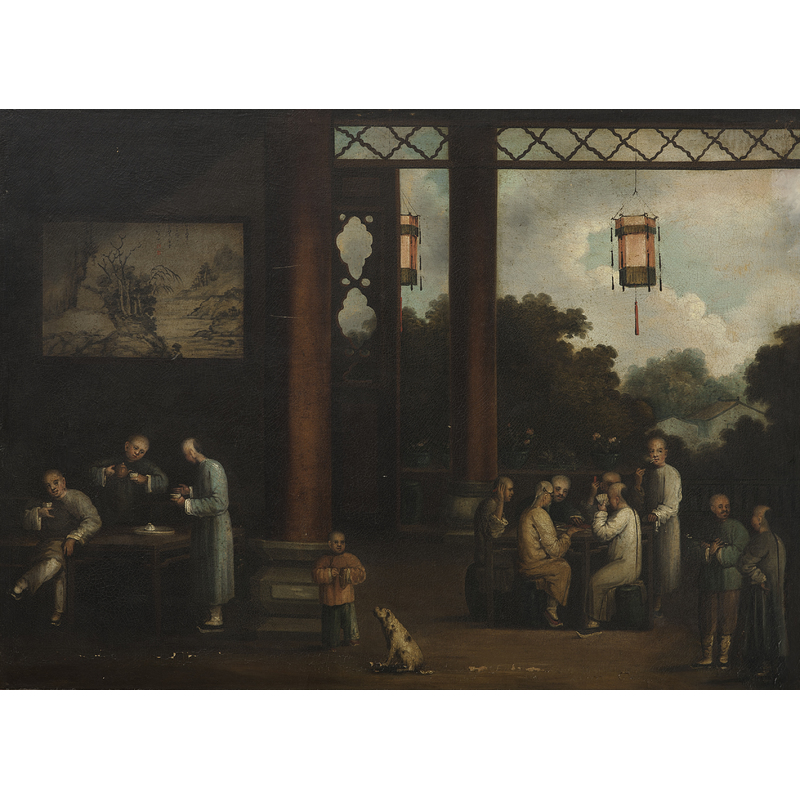 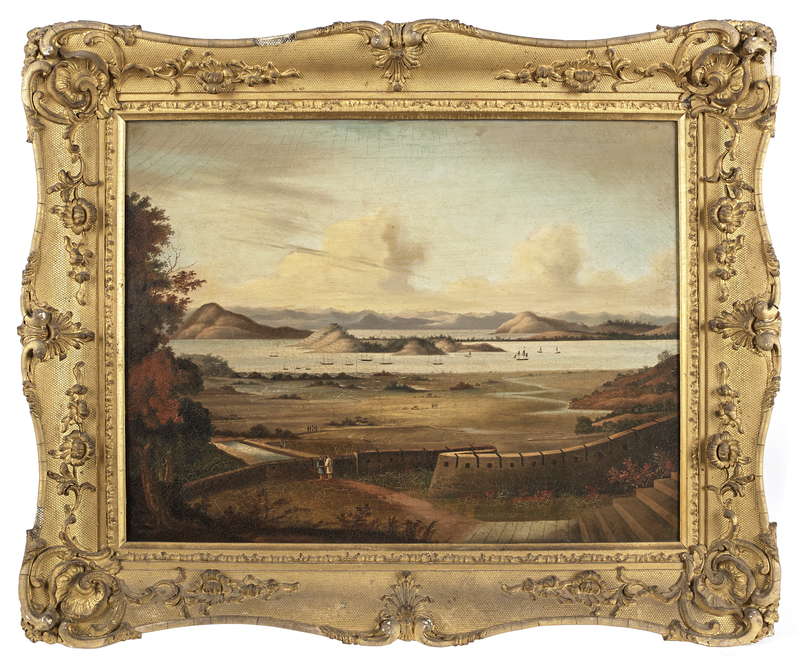 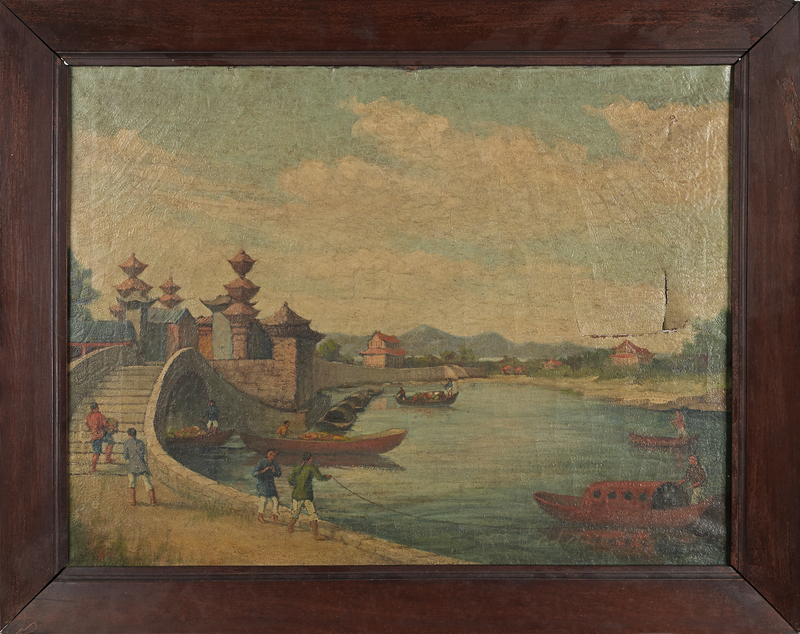 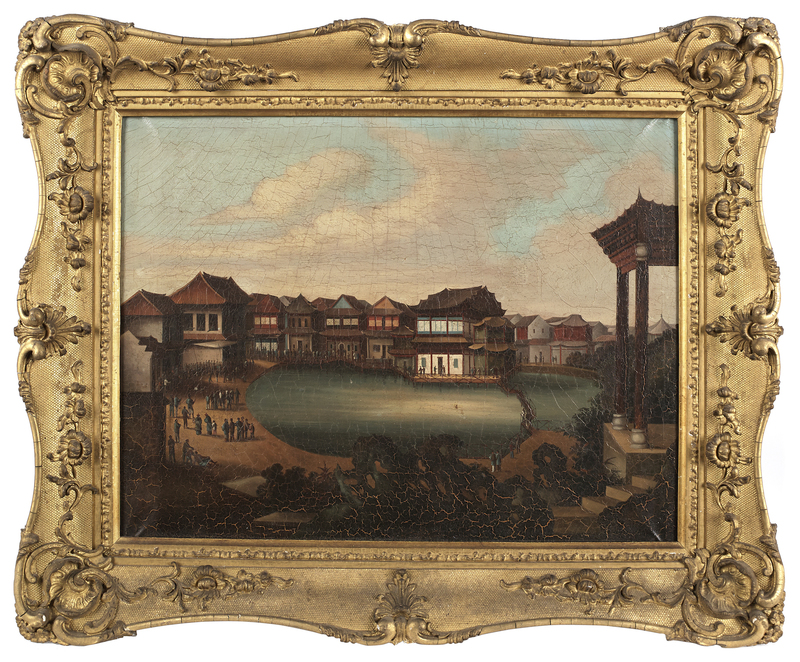 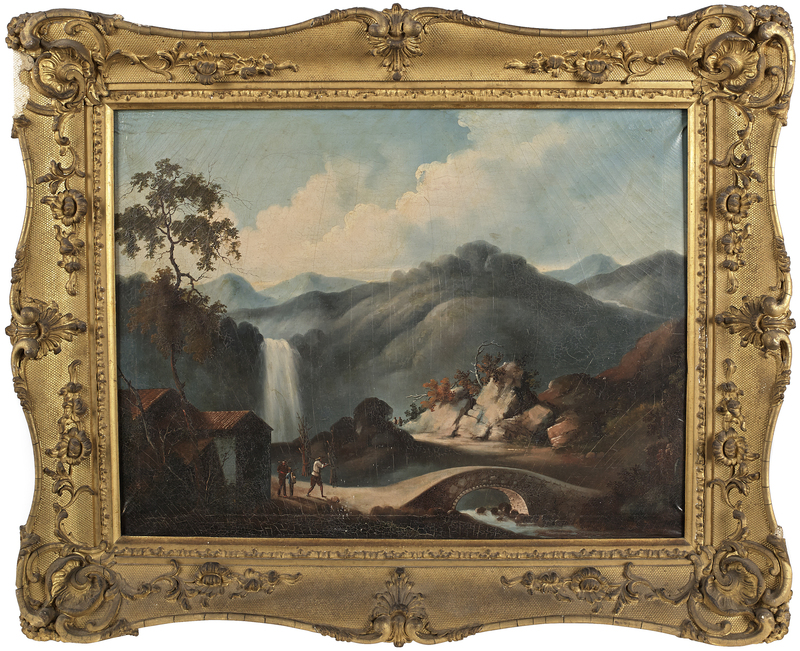