AUDUBON, JOHN JAMES. [Prospectus for The Birds of America ]. Birds of America, from drawings made during a residence of upwards of twenty-five years in the United States and its Territories, by John James Audubon...Prospectus....[Edinburgh ?, probabl...

AUDUBON, JOHN JAMES [Prospectus for The Birds of America ]. Birds of America, from drawings made during a residence of upwards of twenty-five years in the United States and its Territories, by John James Audubon ..Prospectus....[Edinburgh ?, probably March 1827]. One leaf (two pages) with conjugate blank leaf, 4to, 275 x 220mm. Originally folded twice horizontally and twice vertically (the center horizontal fold with slight wear), slightly browned. Red half-morocco gilt, t.e.g. FIRST EDITION; AN UNRECORDED VARIANT of Fries's Edition A, published upon completion of the first five plates by William Home Lizars (the first number). Fries, Appendix F, pp. 385-389 (one copy only, not recording this copy). Thomas Sully's copy of edition A, at the American Philosophical Society, Philadelphia, PA, bears the words "and New Castle Tyne" in line 13 of the first page; the present copy has these words deleted from the list of Audubon's memberships to learned societies and the setting of this list has been re-justified. The opening paragraph of text comprises 16 lines in the APS copy and 17 lines in the present copy. The succeeding paragaphs have minor differences but the text is iÿdentical. Differences in the typeface make it plausible that this prospectus was printed at a different press than the APS copy. A correct count of the number of editions of the Prospectus has yet to be established. Fries records six "editions", noting a total of 16 copies of all those six editions. From personal observation we should, more carefully designate Fries's "editions" as "versions"; we can add ten more copies; an updating of Fries's work is as follows: Version A. As above, without subscribers [Edinburgh, probably March 1827] 2 copies Version B. Dated 1 April 1828, upon completion of six numbers (30 plates). 119 subscribers. one copy Version C. Dated May 1828, upon completion of six numbers. 124 subscribers. 4 copies Version D. Undated [probably early 1829], upon completion of ten numbers (50 plates). 131 subscribers. 4 copies Version E. Dated 1831, upon completion of 20 numbers (100 plates). 180 subscribers (but see below) 13 copies *Version F. Dated 1833, upon completion of 31 numbers (155 plates). Subscribers names uncounted. one copy Version G. Dated March 1835, third volume in progress. 250 subscribers. one copy *Unassigned by Fries and here designated "F". Fries's "F" is here designated "G". Version E, above, is usually found bound up at the end of volume I of Ornithological Biography (Edinburgh: A. Black 1831-39), although several sets examined do not contain it. Presumably, a subscription to The Birds of America taken up towards the end of publication did not require out-of-date information about the number of subscribers, or perhaps there were simply insufficient supplies of the prospectus. Two copies of the prospectus, not noted by Fries, but included here within version E (upon completion of 100 plates), are each in the Ayer Ornithological Library, Field Museum of Natural History, Chicago, IL (Ayer/Zimmer, p. 19) and the Ellis Collection, University of Kansas, Lawrence, KA (Ellis/Mengel 97). Each is bound up at the end of the separate issue of volume I Ornithological Biography , published in Philadelphia in 1831. Thus these Philadelphia printings constitute a separate edition. Clearly, more research is required to establish the existence of Edinburgh, London, Philadelphia and, perhaps Boston printings of the prospectus. The idea of publishing a prospectus for The Birds of America was suggested to Audubon by William Roscoe, William Rathbone and Thomas Stewart Traill in Liverpool on 28 September 1826. The London bookseller Henry G. Bohn was in Liverpool at the same time and, in Traill's presence, he advised: "'Then, Mr. Audubon....issue a Prospectus, and bring forth a Number of your ornithology, and I think you will succeed and do well.'" ( The 1826 Journal of John James Audubon , ed. Alice Ford, New York 1987, p. 233). On 4 Nov 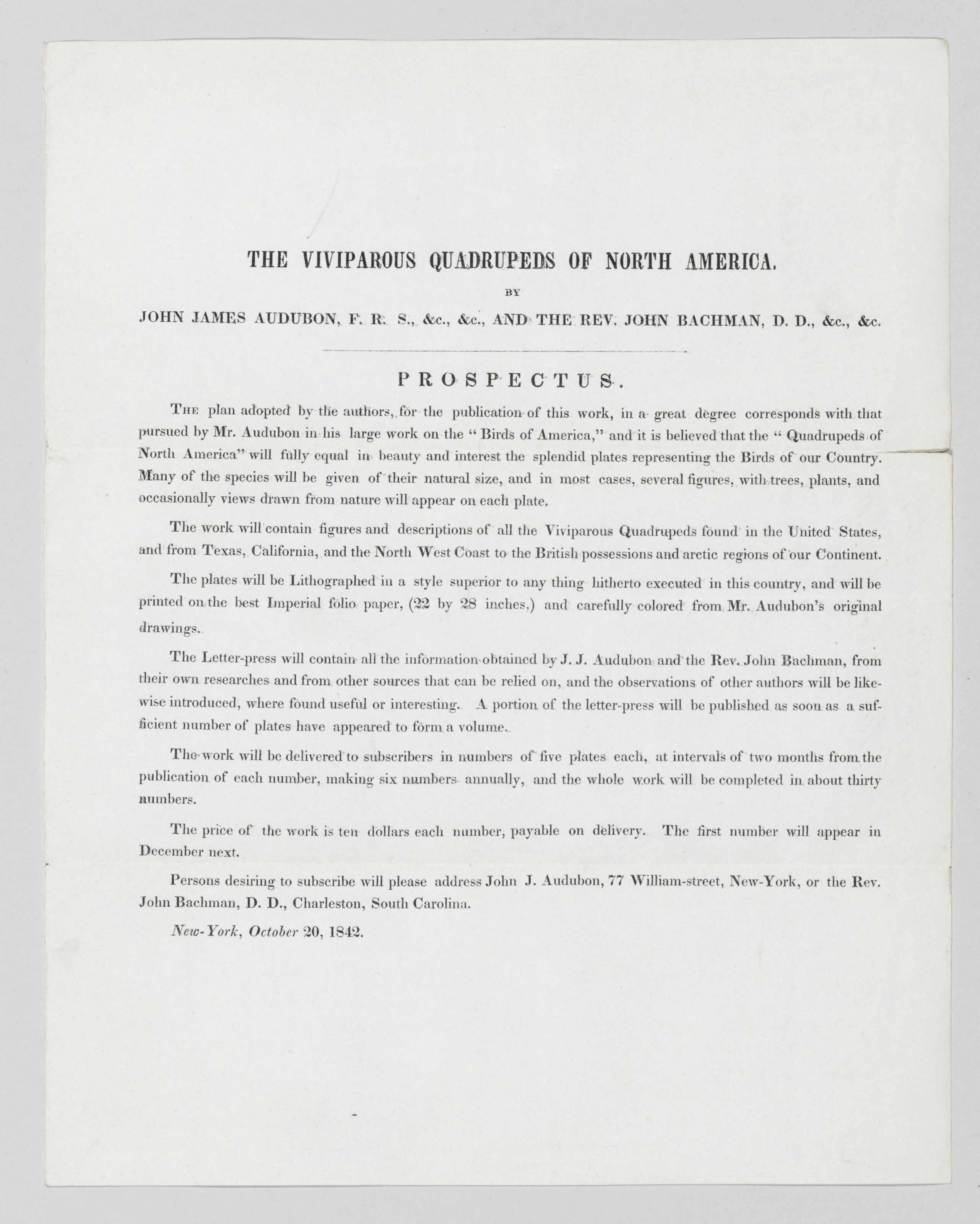 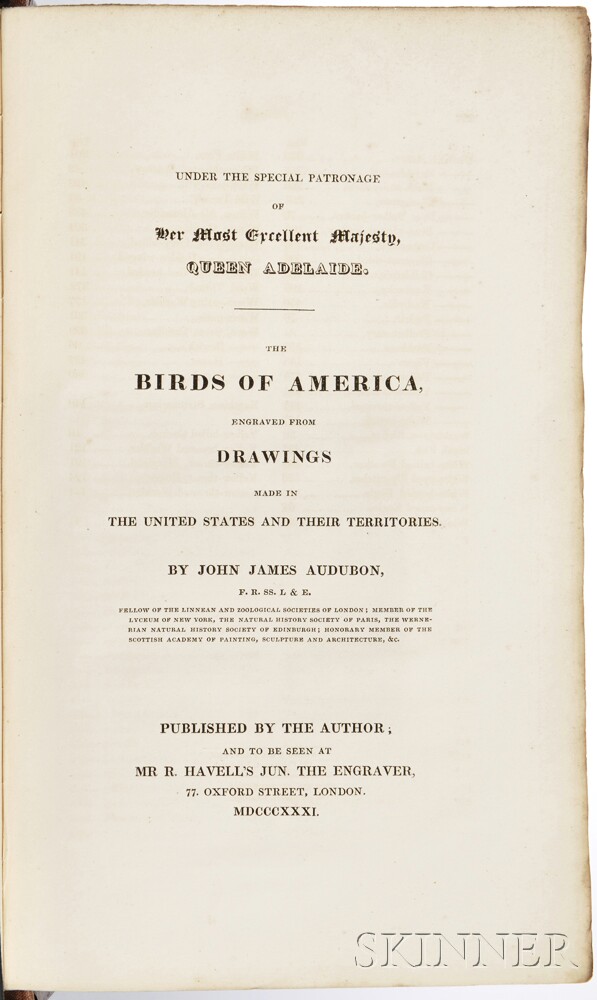