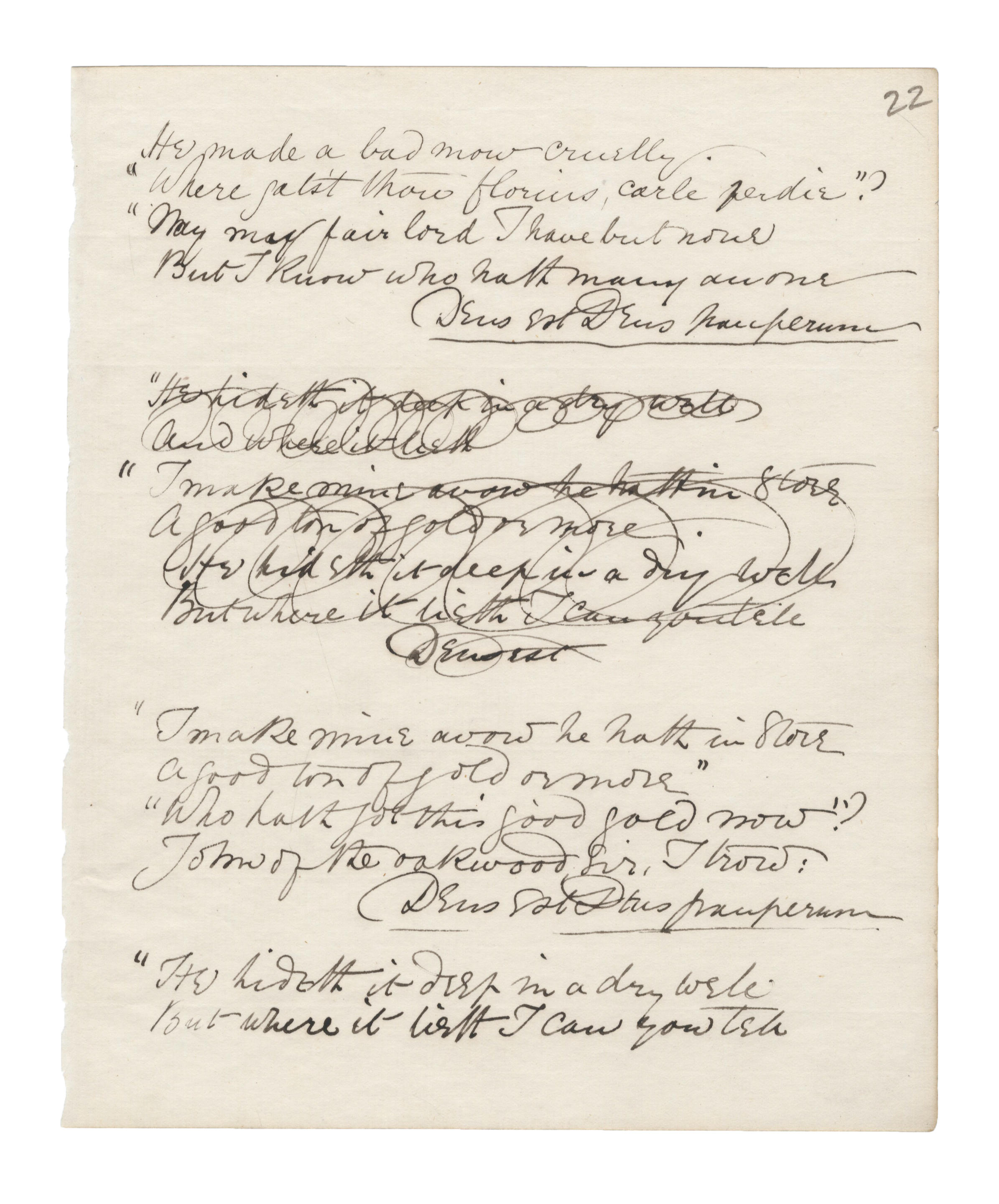 AUTOGRAPH REVISED MANUSCRIPT, IN EFFECT A DRAFT, FOR HIS 'MEDIAEVAL' POEM 'THE GOD OF THE POOR', 118 lines (including some 15 cancelled lines) arranged in 35 five-line stanzas, with extensive revisions and reworkings of some lines and of four stanzas preserving many reconsidered readings, 10 leaves on rectos only, numbered in upper right-hand corners, autograph line count at the end, additional page with note by Charles Fairfax Murray [early 1860s] There was a lord that hight Mal-tête Among great lords he was right great, Poor folk did he tread like dirt None but God might do him hurt Deus est Deus pauperum... THIS MANUSCRIPT, THE ONLY ONE KNOWN OF THE POEM, PRESERVES A TEXT VERY SUBSTANTIALLY DIFFERENT FROM THE RECEIVED VERSION. Of the 260 lines in 52 five-line stanzas in the printed version many do not appear in the present manuscript at all, and vice versa, and many lines and stanzas were very significantly rewritten. According to Fairfax Murray this manuscript was written in the early 1860s, but the poem was only sent for publication in the Fortnightly Review in 1868. Between those dates Morris clearly rethought and very extensively rewrote the poem so that whole stanzas in this manuscript do not correspond in any way with those in the printed text and were completely replaced; others have been so reworked as to be almost unrecognisable, and vice versa. The following examples are but two instances of those where any comparison can be made at all: The third stanza in this manuscript ends: ...Many a fair maid white & red By him was deflowered. Deus est Deus pauperum. The printed version ends: ...Whatso man loved wife or maid Of Evil-head was sore afraid. Deus est Deus pauperum. The first four lines of the sixth stanza in this manuscript read: But Boncoeur knew it was in vain To strive to take him by force plain; Therefore he made a crafty wile God gave him wit and much good guile. In the printed text they read: But Boncoeur deemed it would be vain To strive his guarded house to gain; Therefore within a little while, He set himself to work by guile. The first four lines of the eighth stanza in this manuscript read: Than of twenty poor mens lives I wis Boncoeur well imagined this So a good squire not lightly feared Put on a carles hood and a carles beard. In the printed text they read: Twenty poor men's lives were nought To him, beside a ring well wrought. The pommel of his hunting knife Was worth ten times a poor man's life. With the manuscript is a note about the poem in the hand of Charles Fairfax Murray (1849-1919), artist, assistant to Burne-Jones, William Morris, John Ruskin and D.G. Rossetti, art dealer and connoisseur, stating: 'The following poem God is the God of the Poor was written about the same time [i.e. early 1860s] as the first Prologue for the Earthly Paradise (that in 4 line verses) & was written in the same M.S. book. It was not published till some years later when Mr Morris was solicited to send something to the Fortnightly [Review] & found this in his hand.' The largest collection of William Morris's papers is in the British Library; others are in the Fitzwilliam, Yale, Texas and Princeton. PROVENANCE: Charles Fairfax Murray; Maggs Bros. catalogue 517, 1929, item 999; Hugh Walpole; Christie's Walpole Sale, 2 July 1945, lot 46; Maggs Bros.; John Roland Abbey; Sotheby's, 14 December 1976, lot 218; Sotheby's, 17 December 1981, lot 250; Bertram Rota. [Formerly part of the album that is British Library, Add. MS. 74255 (acquired in 1998)]. REFERENCES: Chris Fletcher, 'A Rediscovered and Partly Unpublished Morris Notebook', Journal of the William Morris Society, 14.3 (Winter 2001), pp. 12-20; Florence Boos, Earthly Paradise, 1990; Index of English Literary Manuscripts, Volume IV, 1880-1900, Part 3, compiled by E. Barbara Rosenbaum, 1993, MoW 178; The Fortnightly Review, volume IV, new series, July 1 to December 1, August 1868. 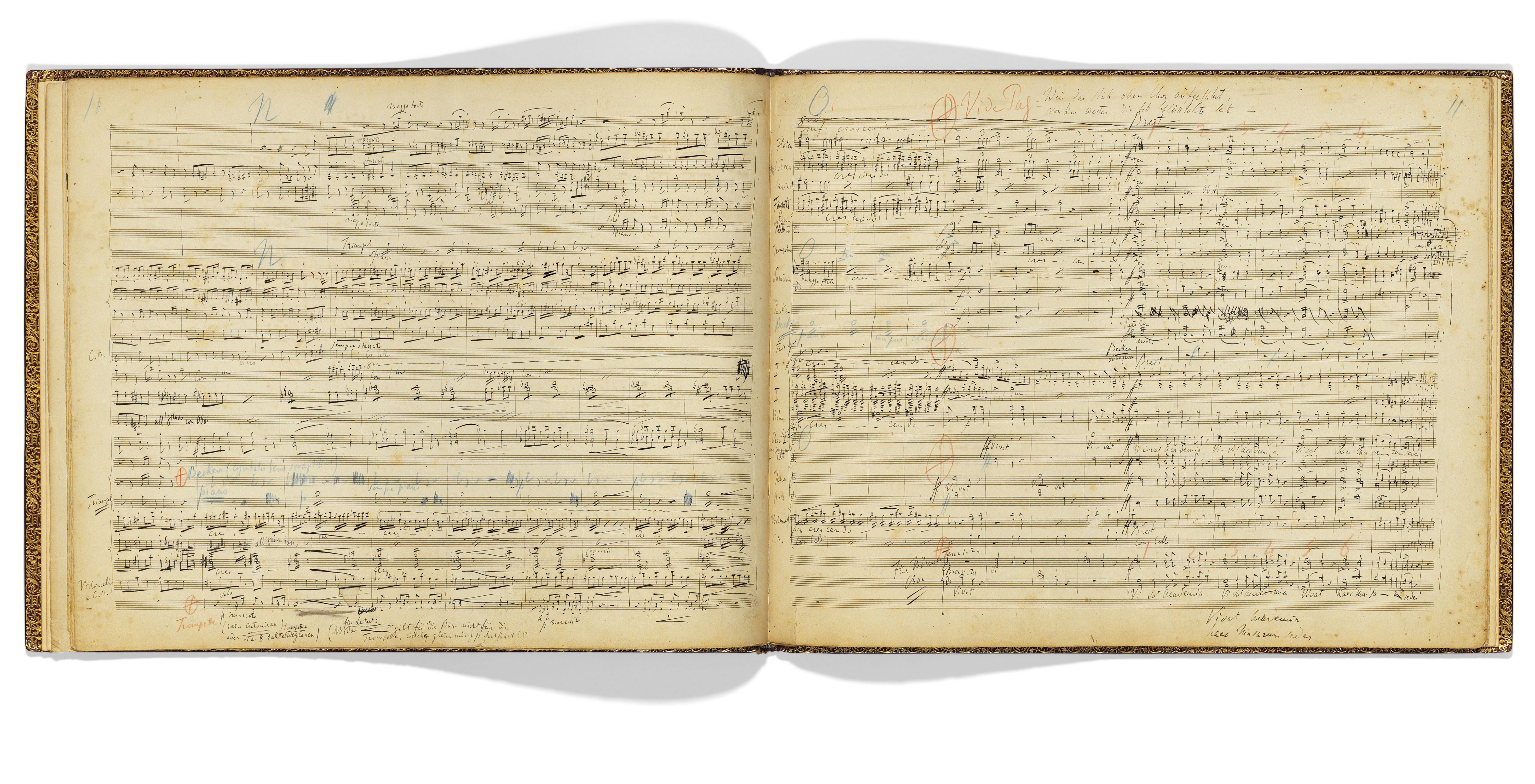 AUTOGRAPH MANUSCRIPTS OF FOUR POEMS: (i) AUTOGRAPH REVISED MANUSCRIPT OF HIS POEM