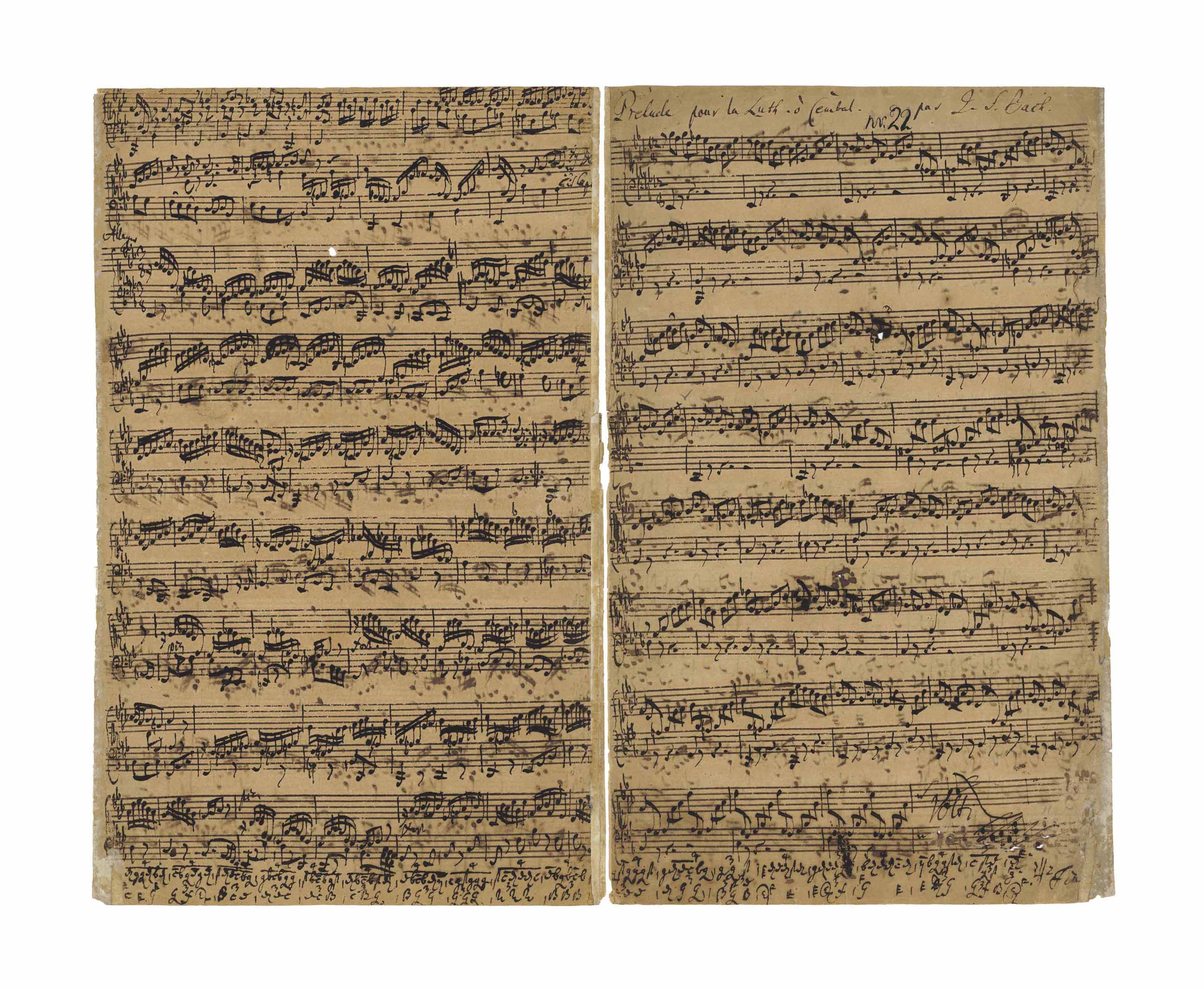 BACH, Johann Sebastian (1685-1750).
BACH, Johann Sebastian (1685-1750). Autograph music manuscript, titled and signed in autograph ‘Prelude [-- Fuga – Allegro] pour la Luth. ò Cembal. Par J.S. Bach’, for the Prelude, Fugue and Allegro for lute or keyboard in E flat major, BWV 998, n.d. [c.1735-1740]. COMPLETE. In keyboard notation, the conclusion of the Allegro compressed in German tablature into the lower margins of pp.4 and 1, the second and third movements titled ‘Fuga’ and ‘Allegro’ in autograph, approx. 18 autograph corrections, marked 'Fin[e]' at the conclusion; the numbering ‘nr. 22’ inked over a pencil annotation at the head (perhaps a catalogue number of the collection of the Counts von Voss of Buch), a few additional musical notes in another hand at the foot of p.1, possibly intended to be read in inverse orientation and suggesting that Bach may have reused the paper; and a few light pencil markings, apparently by an editor. Four pages, folio (approx 345 x 213mm ), on a bifolium (the two leaves now separated). The complete manuscript for one of Bach’s ‘finest solo instrumental works of the mid- to late-1730s’ ( Richard D.P. Jones. The Creative Development of Johann Sebastian Bach , vol. II: 1717-1750) An original instrumental composition, with movements in three of Bach's most characteristic forms: prelude, fugue and a dance movement. Offered for sale for the first time since 1969. One of only three complete autographs to come to the market in the last 30 years, and the first since 1996. Fewer than twenty Bach manuscripts of any kind, including fragments and partially autograph or amended orchestral parts, have been offered for public sale since 1970: all were scores or parts for church cantatas. According to our research, no manuscript of any kind for a secular or instrumental work has appeared at auction since the present manuscript in 1968. No more than ten of Bach's complete autograph manuscripts are thought to survive in private hands: the present manuscript is one of only three for instrumental compositions. Introduction to BWV 998 The autograph of the Prelude, Fugue and Allegro in E flat BWV 998 captures Bach in the moment of composition. The fluent, unhesitating calligraphy suggests his confident conception of the piece. That he was writing down the composition for the first time is shown by his various corrections and his difficulties fitting the piece onto the available paper. Normally Bach carefully planned the layout of his music manuscripts before he started writing; here he ran out of space for the final movement, and had to squeeze the last 19 bars onto the bottom of the fourth and first pages, using the concise notation of keyboard tablature. The manuscript indicates that the piece is ‘pour la Luth ò Cembal’. Lutes were still regularly used in Bach’s lifetime: a particularly valuable instrument, worth as much as a small harpsichord, was listed in the post-mortem inventory of his estate. He was acquainted with the leading lutenists of his day, notably Silvius Leopold Weiss (1686–1750). In August 1739 Bach was visited by Weiss and other Dresden musicians including W. F. Bach and Weiss’s pupil Johann Kropfgans; Bach’s secretary commented on the ‘extra fine musical things’ they enjoyed during this stay. The low tessitura of BWV 998 (never exceeding eb’’) suits the lute, although a few chords in the second and third movements cannot be played on an eighteenth-century lute without modification. Alternatively the piece could have been played on the lute-harpsichord ( Lautenwerk ), a keyboard instrument with gut strings plucked by quills. Although no eighteenth-century examples of the Lautenwerk survive, two were listed in Bach’s post-mortem inventory. His pupil Johann Friedrich Agricola remembered seeing and hearing a lute-harpsichord designed by Bach in Leipzig around 1740; he claimed that even professional lutenists could be fooled into thinking it sounded like their instrument. Perhaps Bach played a Lautenwerk in the encount 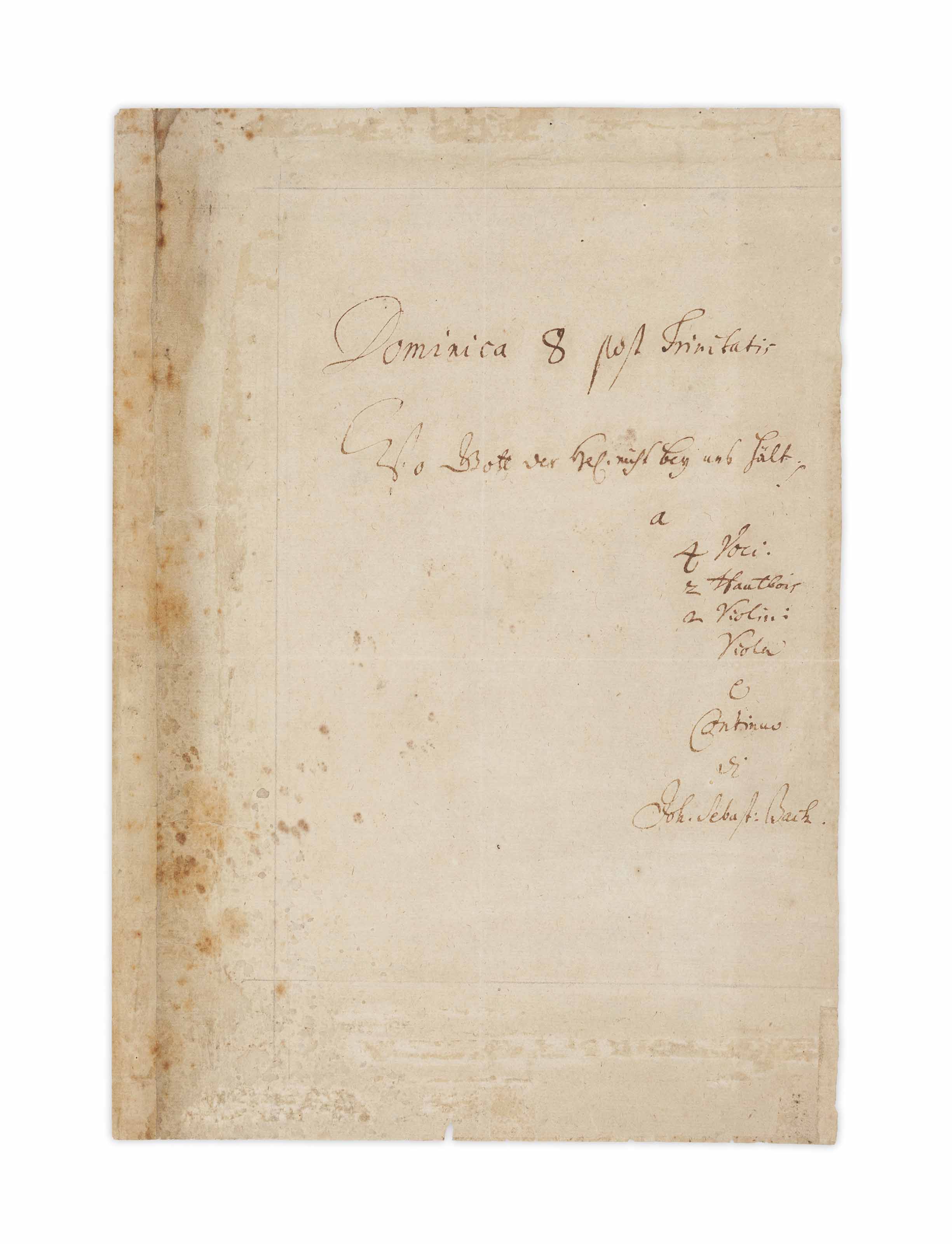 Musica in Nummis: A Collection of Medals