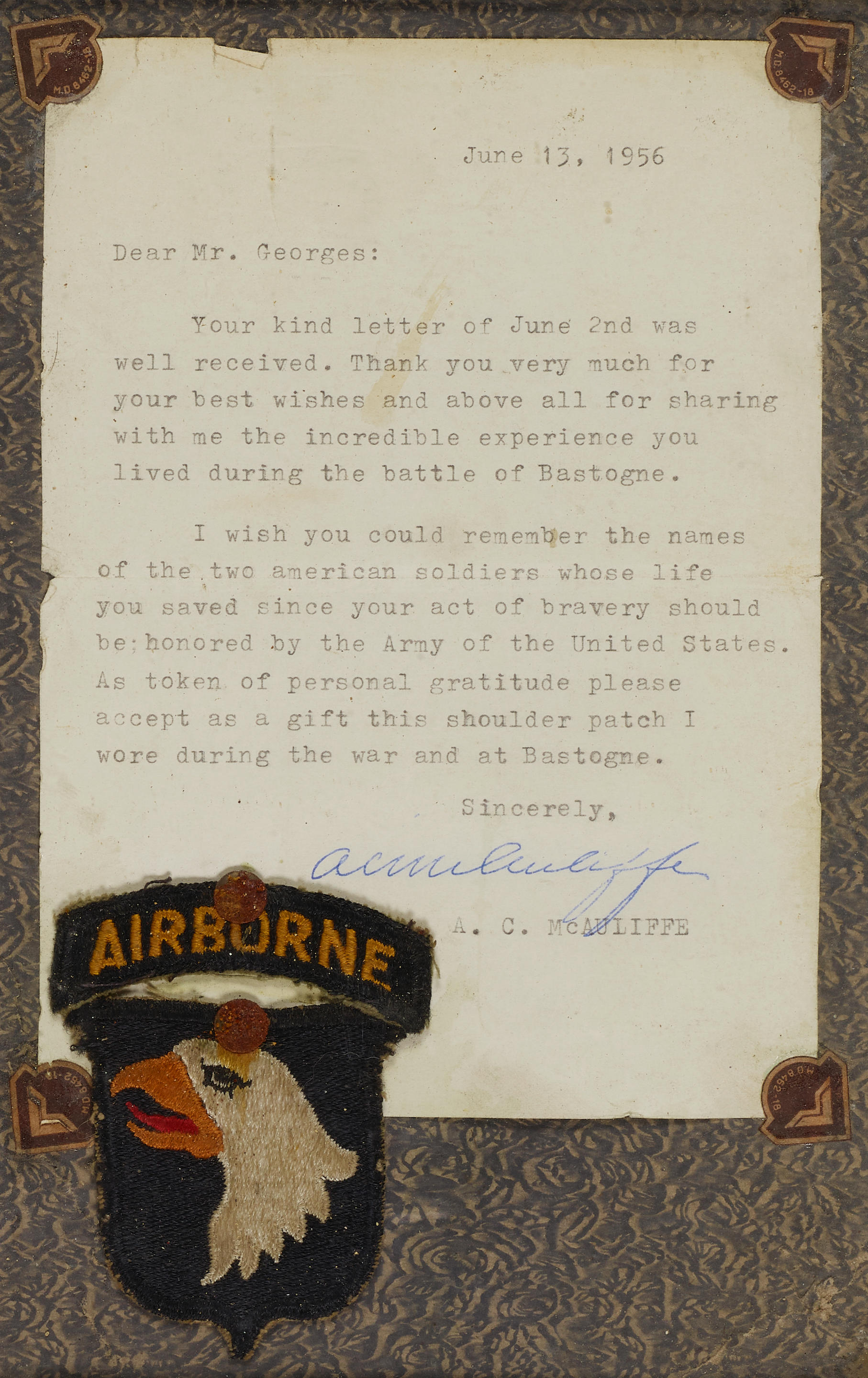 McAuliffe, Anthony Clement, 101st Airborne Division. 101st Airborne Shoulder Patch together with a typed letter signed by McAuliffe, in ball point pen, 8vo, to Mr Georges (a resident of Bastogne), dated June 13, 1956, thanking him for his letter of June 2nd, and thanking him for sharing his experiences during the Battle of Bastogne, and particularly for saving the lives of the two American soldiers, he goes on, As token of personal gratitude please accept as a gift this shoulder patch I wore during the war and at Bastogne, the letter tipped on patterned paper, and framed with the shoulder patch. Frame 270 x 190mm. (10.5 x 7.5 inches.) Provenance: Mr Georges; Purchased by a Bastogne Collector. A fascinating relic of the Battle of Bastogne, McAuliffe, some 12 years after the battle, sending one of his shoulder patches to a civilian resident who saved the life of two American soldiers, during the Battle of Bastogne. McAuliffe (1898-19975) was the acting Commander of the 101st Airborne sent in to stop the German advance through the Ardennes. He organized the defense of the town, digging his forces into a circular perimeter to meet the onslaught of the German forces. On December 22, 1944, General von Lüttwitz, whose German forces had surrounded Bastogne, sent McAuliffe a message under the flag of truce, asking him if he wanted to surrender. When the message arrived at his Isle de Hesse HQ he muttered "Aw Nuts," crumpled the piece of paper up, and threw it in a bin. After some deliberation, his senior staff decided to reply with his words, and the reply was duly typed out officially and delivered back to the Lüttwitz. The German command did not understand the reply and asked Colonel Harper, who delivered it, what it meant: "Go to Hell" was the reply. The siege lasted until December 26th when Patton's 4th Armored division broke through the German blockade. McAuliffe went on to great things becoming a Major General, in command of the 103rd Infantry Division in January 1945, and after the War, Commander of the 7th Army in Europe, and in 1955 raised to a four star General. This act of sending a small token of his appreciation to a Bastogne civilian shows the measure of this great American General.