BATTLE OF THE BULGE: WATERCOLOR OF THE 17th AIRBORNE DIVISION'S ATTACK ON MONTE (MANDE-STE-ETIENNE), WEST OF BASTOGNE. 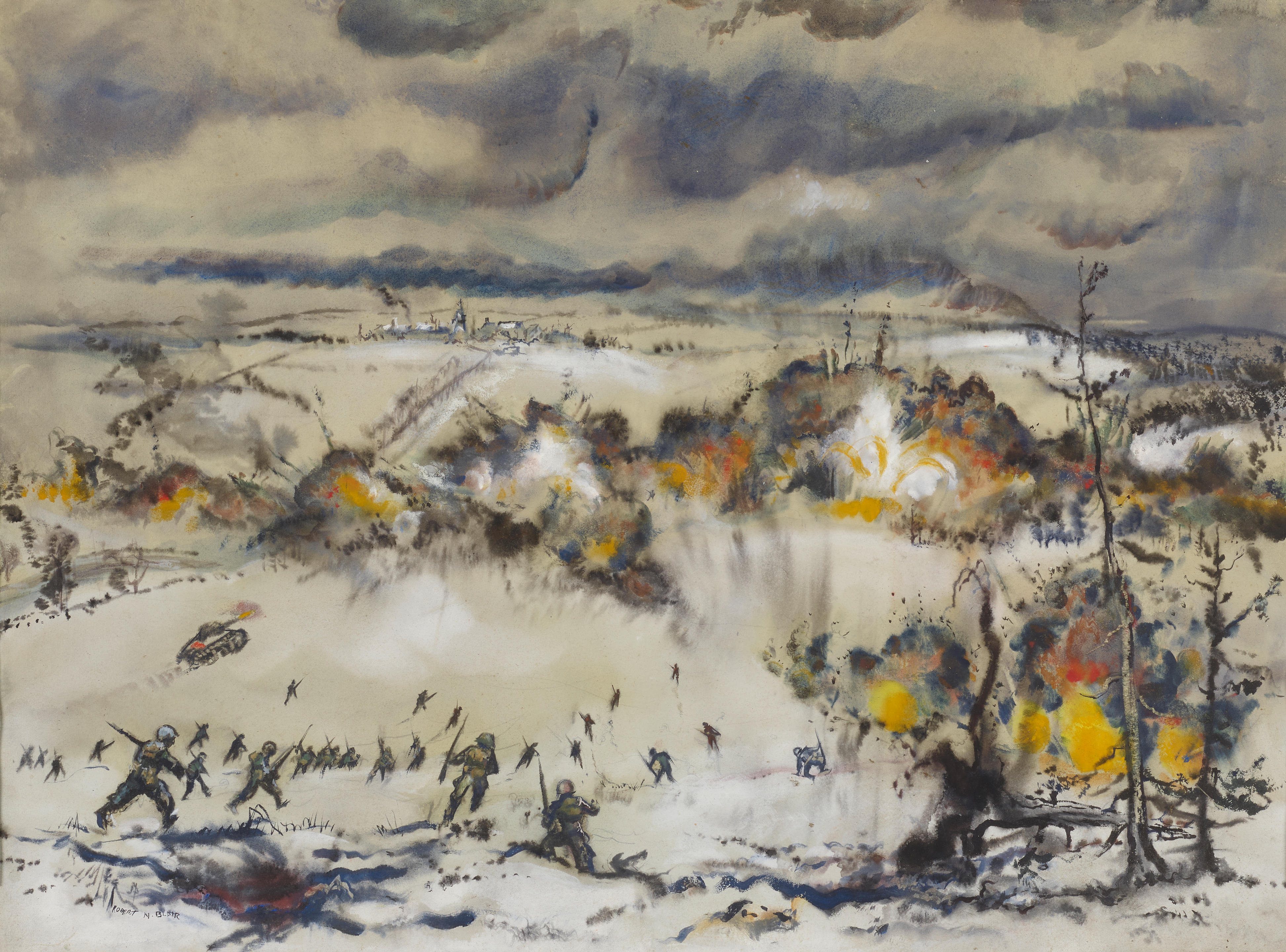 Blair, Robert Noel. Artist. 1912-2003. "Battle for Monte in the Ardennes." Painted in a Liege Hospital, Belgium: A Battle Scene for January 5th, 1945, painted in the "3rd week of Jan. 1945" A dramatic and vivid battle scene, in watercolor on thick grey paper, of a wintry daylight scene in the Ardennes, with a tank and ground support troops attacking a village on a hill, the land around covered with explosions, signed at lower left "Robert N Blair", and on verso two pencil inscriptions, Robert N Blair, 125 Wadebridge Ave, Buffalo, NY. Battle to take Monte Belgium. 5 Jan 1945. and This painting by my friend Robert Blair was painted in Liege about 3rd week of Jan 1945- from my description of battle. Mr Blair gave it to me about 1950. I discussed giving it to Pierre Godeau for future museum - he agreed to this - so its is a gift to your museum from Mr Blair and myself - both veterans of 17th ABN Div, 570 x 780 mm. (22.5 x 30.5 inches.). A rare World War II contemporary-painted battle scene, by an established artist. Robert Blair is known for pictures of the American West, New York, Vermont, Maine and the Battle of the Bulge, and he had already had several exhibitions in New York state before the war. It seems he and his fellow soldier, Cogar, were in the military hospital in Liege when Cogar told his story, and Blair rendered it into a watercolor. The story of the 17th Airborne Division's early experiences in WWII is an interesting one. The 17th was activated in April 1943, had a long training in the US, and were then sent to England for more training. They did not take part in Operation Overlord in Normandy, but were kept in reserve until on December 23rd they were flown into Rheims, France to support the American lines in the Battle of the Bulge. The were swiftly moved up to the area to the west of Bastogne arriving at Morphet on January 3rd,, relieving the 28th Infantry Division. Patton then ordered the 17th and 101st airborne and 87th Division on either flank, But Pattons intelligence that the Germans were in retreat was poor and strong German Forces supported by Tiger Tanks lay in wait. The first battle of the 17th Airborne Division, was their attack on Mande-Ste-Etienne (here called Monte), because it was on a hill), supported by the 630th Tank Battalion, which began on January 4th and continued into the 5th, and turned into a disaster. The Germans repelled the attack and the 17th took positions in a wood outside the town. In that battle five American tanks were destroyed and the 17th Airborne lost 275 men on its first day of combat. They then regrouped and joined the 3 day Battle of Dead Man's Ridge just north of Mande-Ste-Etienne, pushing back the enemy by the 7th, with the loss of 1000 men. On that ridge a 17th Airborne gunner won the units first (of many) medals of Honor. It is often assumed that after the Siege of Bastogne had been broken by Patton's forces that the attacking German forces faded away. This was the last German assault of the war and even though their supply lines had been cut, and some 700,000 American soldiers poured into the Ardennes, and the British 3rd army in Holland moved south to pressure the Northern flank of the Bulge, it took until January 25th to push the German army back into Germany. It was a very hard fought battle waged in the middle of a bitter winter, with exceptional German resistance. In fact the Battle of the Bulge used the largest number of American soldiers ever put into the field, in American military history. 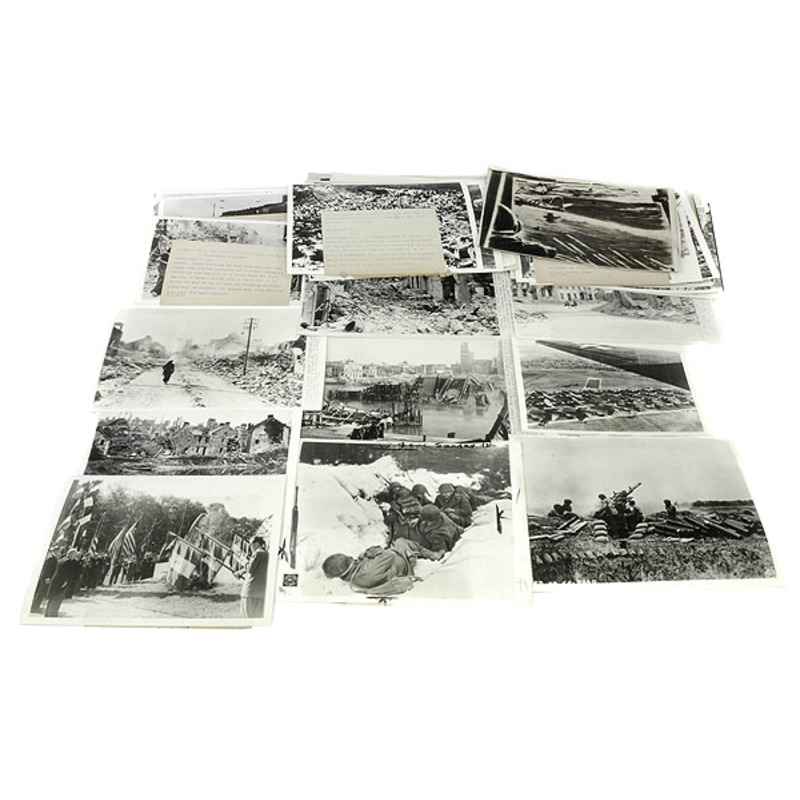 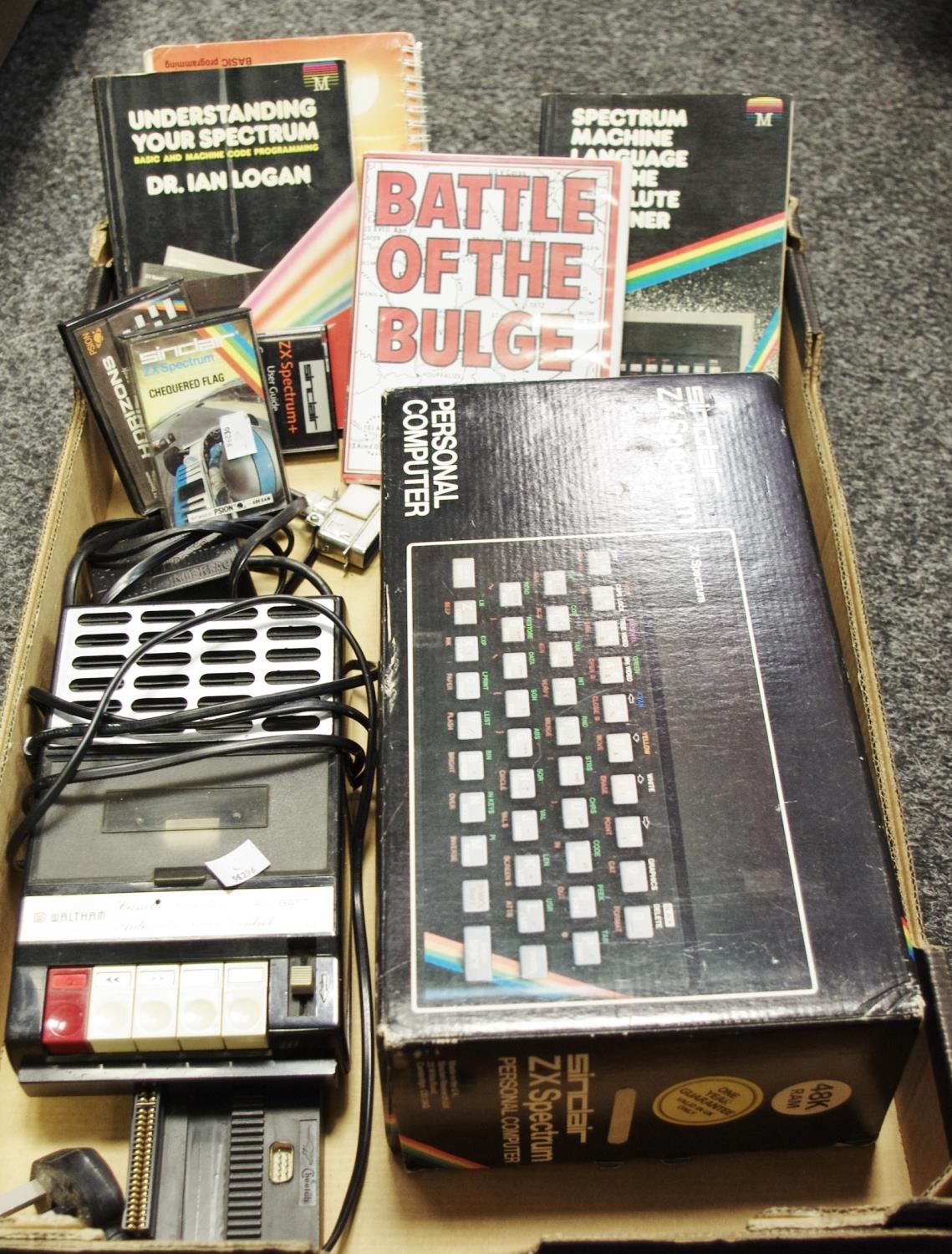