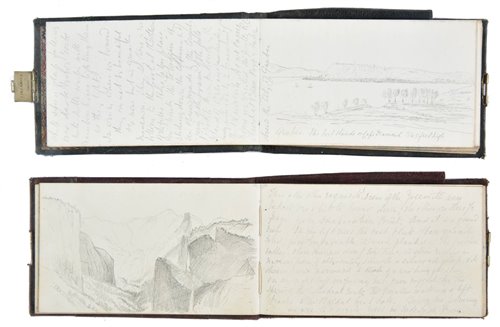 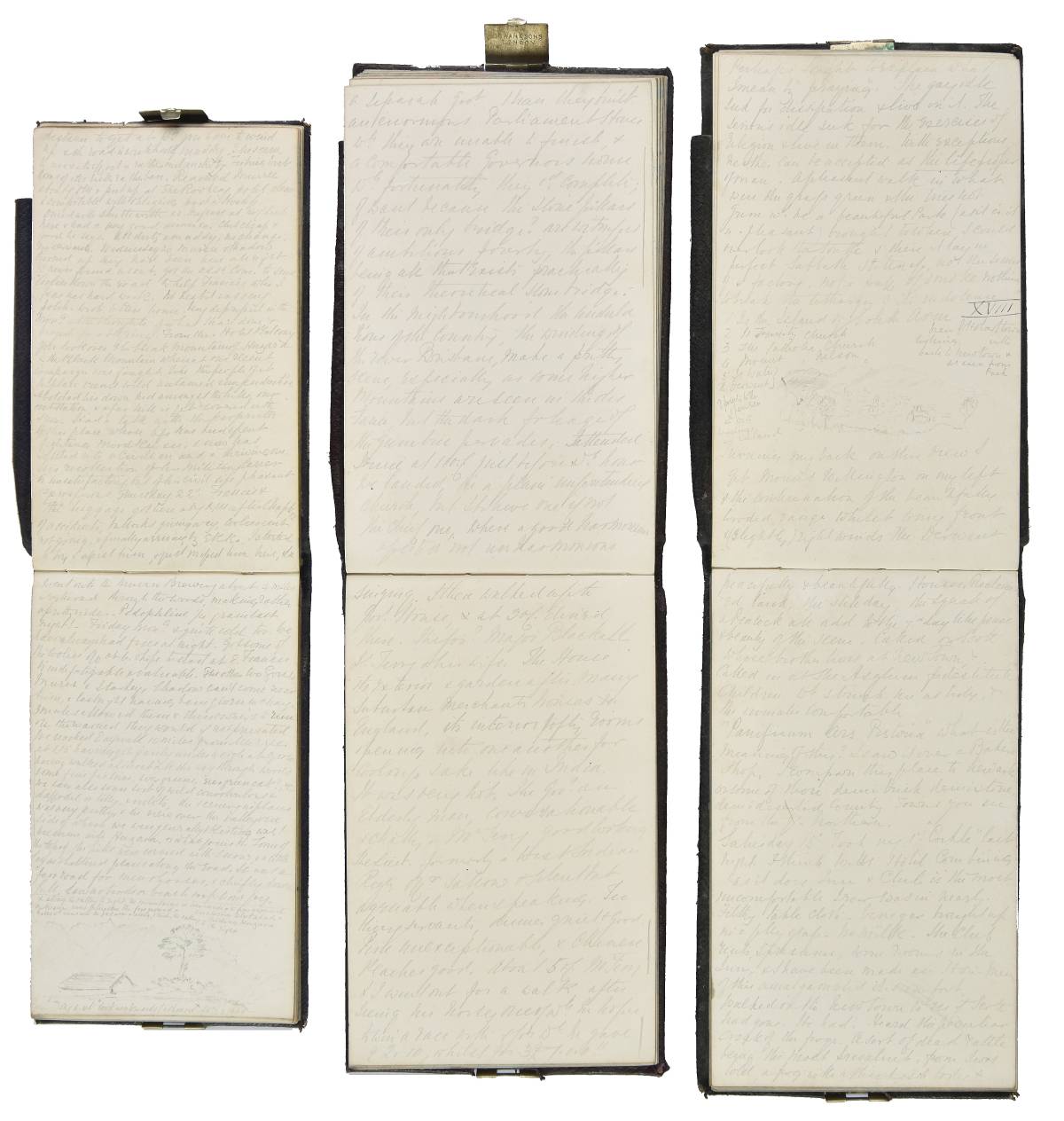 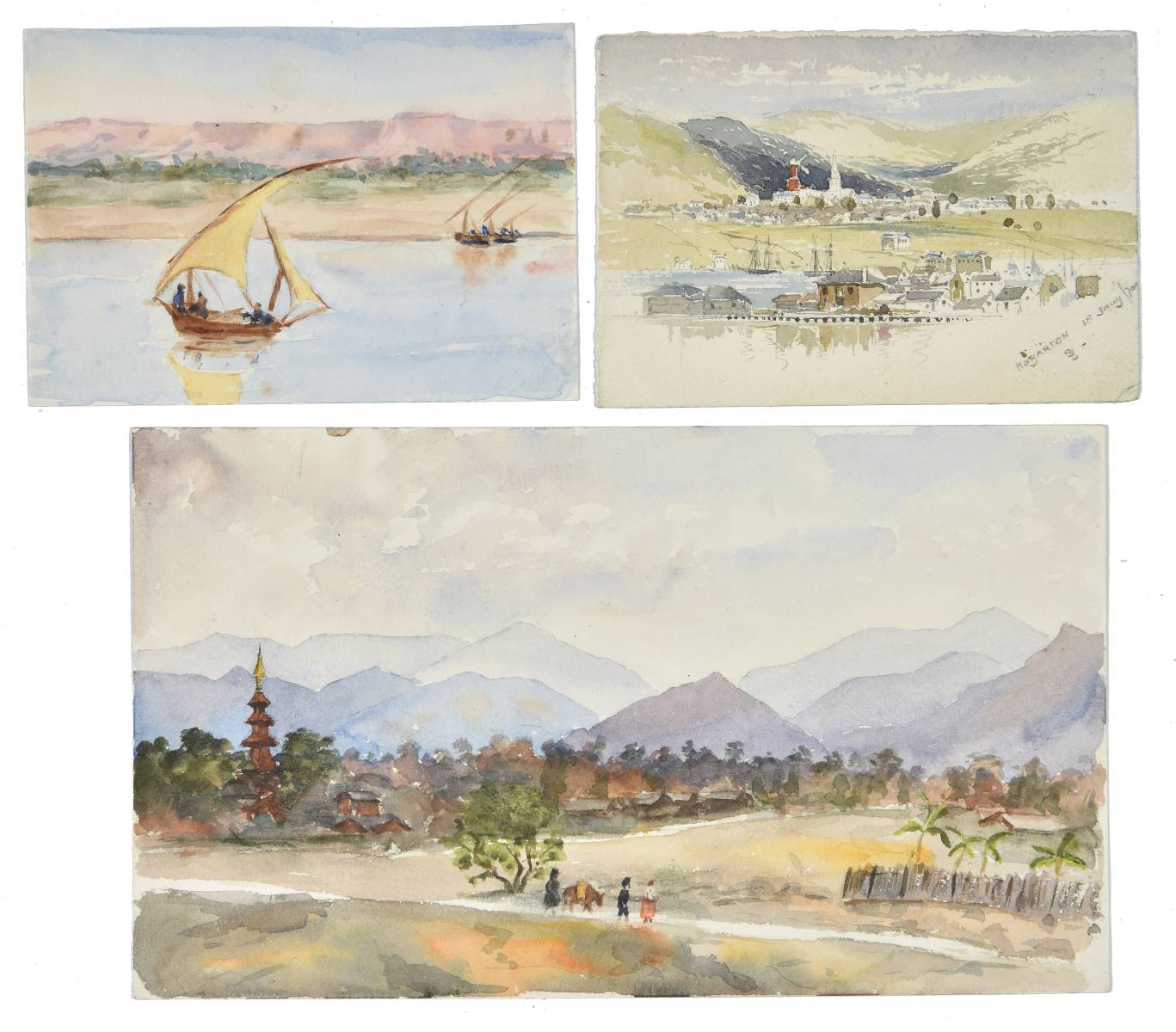 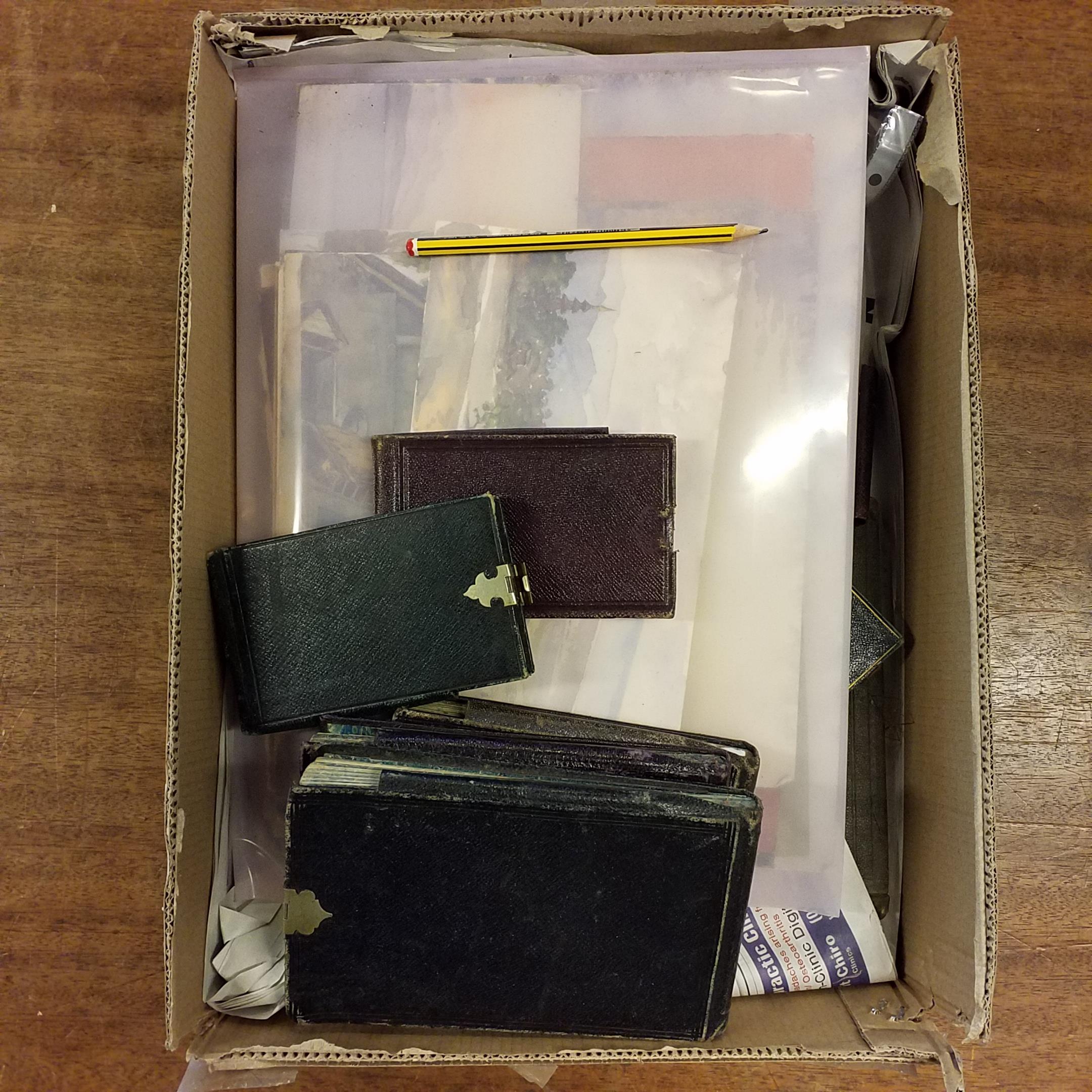 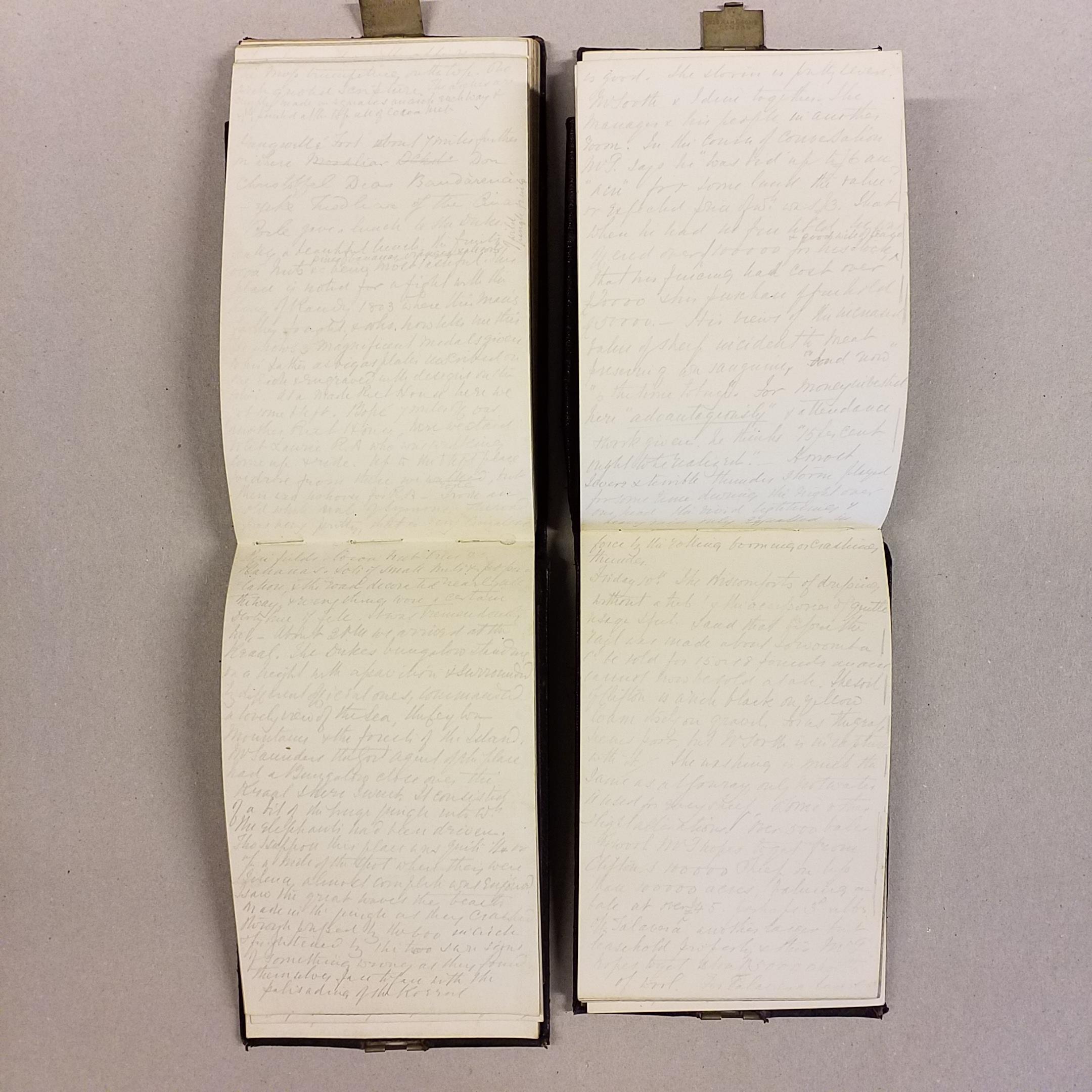 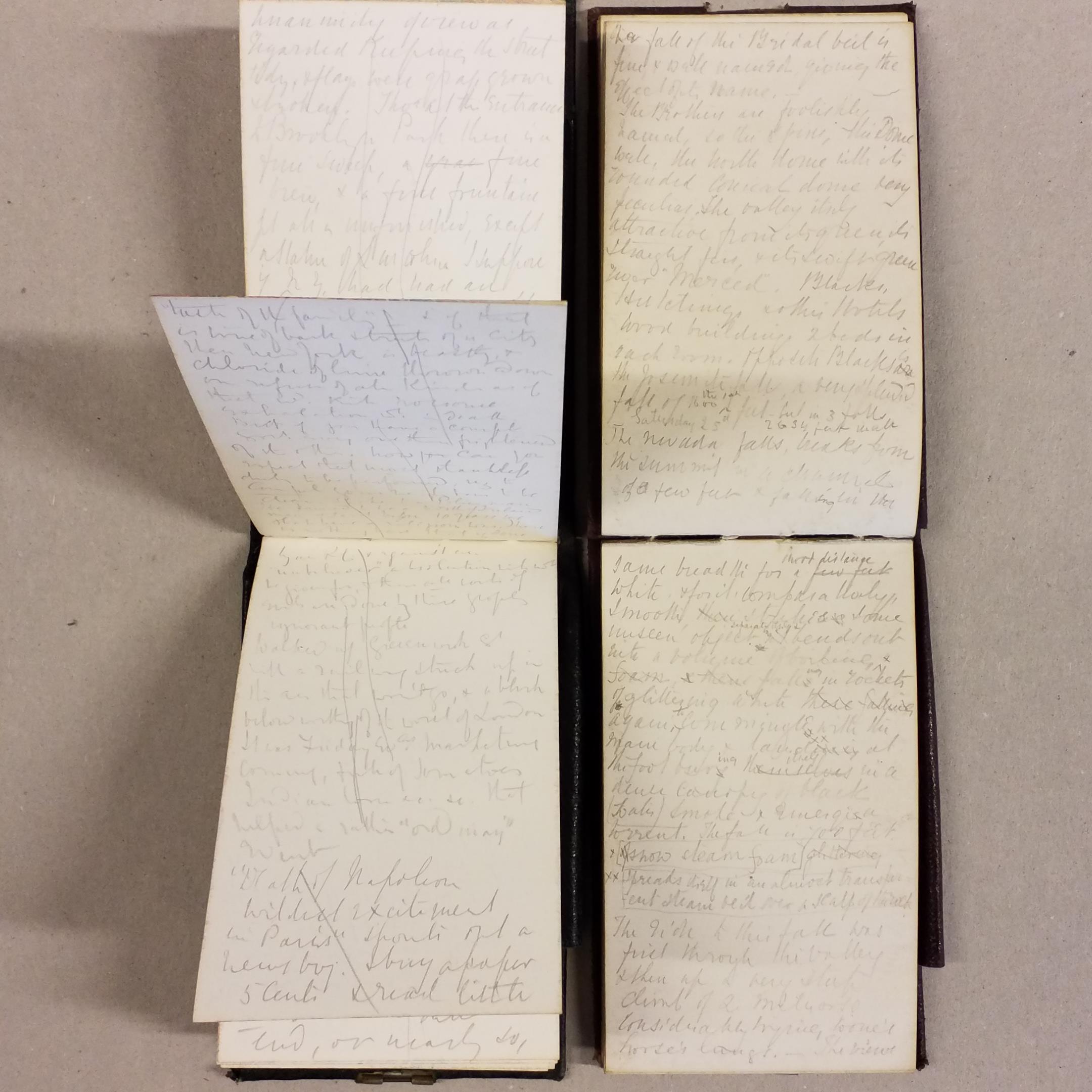 Bell (Major William Morrison 1834-1900). An Archive of travel diaries, notebooks, letters & drawings documenting a trip around the world in 1869-70, comprising eight diaries and a further printed day-to-day diary for 1870, dated between March 1869 and August 1870, together with three further notebooks of thoughts and jottings, all written in pencil or ink, most of the diaries contemporary morocco with clasps, small (oblong) 8vo, plus a small packet of various letters and cuttings, and a series of approximately 60 mostly topographical watercolour drawings (the largest 25 x 35 cm, the smallest 9 x 12.5 cm) (Qty: a small carton) All the manuscript material and drawings are by the Victorian traveller and adventurer Major William Morrison Bell, of the 3rd Kings Own Hussars, and formed the basis of his two-volume travel Other Countries published by Chapman & Hall in 1872. His highly detailed narrative describes the local geography, as well as the people and their characteristics, industrial and agricultural practices in the numerous countries through which he travelled. He appears to have carried out the trip as a private individual, and apparently with several friends. He seems troubled and often complains of suffering from depression - particularly at the start of the first diary where he implies that he has had something of a run-in with the army resulting in him leaving the service. The archive comprises: Diary 1: Travels through India starting at Ahmednagar (India) including travelling with Lord Napier to the Durbar at Umballah, and the resulting ceremonials. Diary 2: Travels through India starting in Simla and finishing in Madras Diary 3: Starts with a sea voyage from Madras to Galle (Ceylon), and then on to Australia, with long descriptions of Melbourne, Sydney and Brisbane, as well as surrounding areas and industry. Diary 4: Starting in Brisbane, and on to Melbourne (again), Tasmania - Melbourne - Galle - Penang - Singapore - Hong Kong. Diary 5: Starts in Hong Kong, moving on to Whampoa, Canton, Shanghai and into Japan. Diary 6: Experiences in Japan, ending with a move onto San Francisco and California. Diary 7: A remarkable diary starting in San Francisco and detailing his trip (at that time the real Wild West) by coach through Yosemite, San Jose, Lake Tahoe to Salt Lake, where several Mormon meetings which he visited are documented. From there he takes the train to Chicago and up into Canada via the Niagara Falls. Diary 8: Starts in Montreal, moving through Quebec, Saratoga, Albany, with excellent descriptions of New York, and finishing at Boston where his tour ends. Diary 9: A Letts’s printed page diary for 1870 with manuscript entries by Bell, noting where he was and key daily events, expenses etc. Three notebooks which detail thoughts and musings, which he may have used when writing his daily entries. Various letters, mainly from India, though one from Sydney and another (dated December 1868) written whilst at Aden, describing the topography and accompanied by a hand drawn panorama sketch; also an 1872 letter from Blanche Wyndham, wife of the 6th Earl of Mayo, who had recently died. Mayo was the Viceroy of India in 1869 when Bell attended the Umballah Durbar. The letter thanks Bell for sending a copy of the printed book. Finally, there are cuttings with reviews of his book from 1872; two printer’s proofs of illustrations from the book with manuscript notes by Bell; and an interesting handwritten medical certificate dated 13 May 1870 from the Royal Navy Dr George (Bruce) Newton certifying that Bell, Colonel Fane and another gentleman should visit the sulphurous springs at Hanoi ‘for benefit to their healths’. Newton set up the Lock Hospital in Yokohama in 1868 to treat syphilis in Japan, which was getting out of control. To muddy the waters, there is an interesting diary entry (in book 5) around the same date as the certificate which teases us with this ‘…from here Dr Newton took us onto one or two brothels, scrupulousl 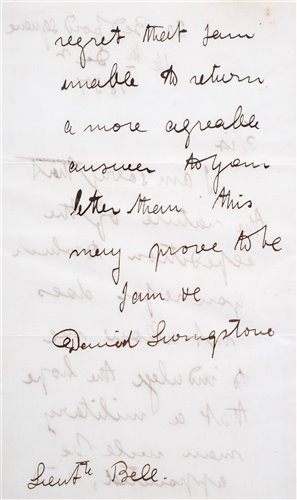 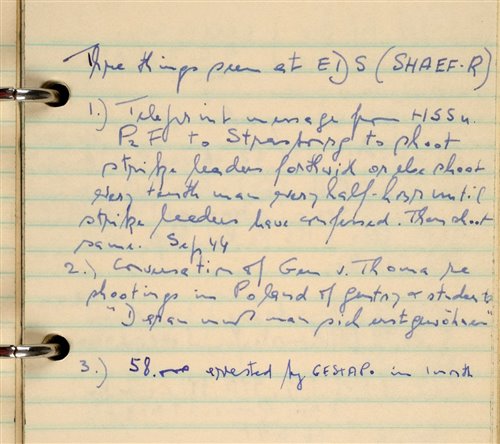