A silver, silver-gilt and enamel repoussé book-cover. [South Germany?, first half 18th century?].
165 x 84 x 78 mm., designed to cover a small octavo or duodecimo volume. Upper and lower covers hinged to spine, the latter curved and with headcap shields at top and bottom. Each cover with a central oval cartouche or medallion of embossed and chased silver (some traces of gilding) in high relief, each showing a different Biblical scene, with incised Latin captions at foot (upper cover: Genesis 370, showing Joseph being put in the pit by his brothers; lower cover: Matthew 3, the Baptism of Jesus and appearance of the Holy Ghost); the spine with three pictorial oval medallions, the uppermost unidentified, the central and largest cartouche from Luke 9 (Jesus with his disciples), the lowermost from Acts 9.4 (Saul cast to the ground by the light from heaven); the silver medallions set within a richly ornamented openwork silver-gilt décor in high relief on a bright blue cross-hatched enamel ground, incorporating large angels, heads of putti, vases, bouquet, floral swags, etc., the headcap protectors of leafy plants and blossoms on the same blue enamel ground. Lacking fore-edge clasps. Interior backing of 14 metal plaques, each plaque with an incised number from I-XIIII. No maker's mark (often found on the clasps, here lacking). With 20th-century boards box filler; housed in padded cloth folding case, morocco gilt lettering-pieces on backstrip (identifying the book cover as French, circa 1670-80) and upper cover (with the arms of Major Abbey). Provenance : the Barons de Rothschild (sale, Sotheby's London, 26-28 April 1937, German, Dutch and other continental silver and silver-gilt of the 15th, 16th, 17th, and 18th centuries, lot 136 - Major John Roland Abbey (provenance note with inventory number in pencil on box filler, "J.A. 1643, Feb. 12 1938," noting that the piece was exhibited at the Antique Dealers' Fair in October 1937). a magnificent silver and vermeil Baroque book cover from the Rothschild and Abbey collections . The majority of silver and silver-gilt bindings and book covers of the seventeenth and eighteenth centuries, made to cover small bibles, songbooks and prayer books of wealthy individuals, were produced in Germany, Holland, Switzerland, and Scandinavia. Repoussé and embossed bindings were characteristic of Augsburg and Nürnberg production. This splendid openwork cover with its decor in high relief and brilliant enamel ground is of an elaborate and refined style that may explain its attribution by Major Abbey to France. 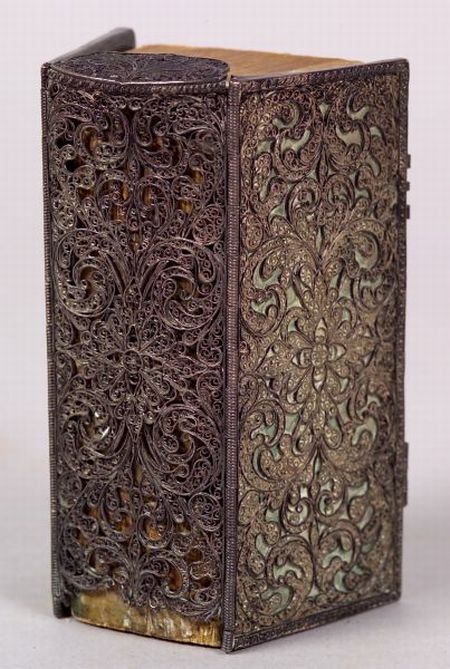 A miniature copy of the Gospels, illumin

A collection of four bibles with silver