Cecily Brown East of Eden 1999 oil on linen 190.5 x 190.5 cm (75 x 75 in)
Provenance Gagosian Gallery, New York Exhibited New York, Gagosian Gallery, Cecily Brown, 14 January – 19 February 2000 Literature E. Wingate and R. Dergan, Cecily Brown, Gagosian Gallery, New York, 2008, pp. 96-97 (illustrated) E. Wingate, Cecily Brown: Paintings 1998-2000, Gagosian Gallery, New York, 2000, plate 10 (illustrated) Catalogue Essay In 1993, following a six-month placement in New York City, the British-born artist Cecily Brown took on a small studio in Lower Manhattan’s White Street. Escaping the brash installations and shocking spectacles of the Young British Artists in London, this move proved immensely successful for her. Equipped with a training from London’s Slade School of Fine Art, and the esteemed British painter Maggie Hambling, Brown’s work began to recall the Abstract Expressionists of the 1950s. She is happy to have her painting style described as hovering between abstraction and figuration: “I’ve always wanted to have a lot of different ways of saying something, maybe sometimes to the detriment of the paintings,” Brown says, “so that you might have a veil of paint that suggests some very delicate skin, but then I’ll want something very meaty and clogged next to it.” This conflict and ambiguity within her canvases paradoxically creates a most singular atmosphere, and she says she is “always trying to say something specific about a specific thing or place” (‘New York Minute’, AnOther Magazine, 14 September 2012). While she acknowledges a shared interest with British contemporaries concerning “basic sex and death type things, a certain violence” (‘New York Minute’), Brown’s range of interests sets her apart. In 2008, her bookshelf revealed a variety of influences including Hieronymus Bosch, Chinese eroticism, Aubrey Beardsley and El Greco (interview with Zefrey Throwell, 2008). The present lot, East of Eden (1999), is one of her earlier works; it was last exhibited in her solo show at the Gagosian Gallery, Rome, in 2008. Two human figures can be discerned in the painting – a female dominates the top half of the canvas, while a male lies outstretched at the bottom. Seen from a distance, the figures become much more prominent, but observing them close up, one is struck by the abstract,painterly quality of the surface. East of Eden recalls Hieronymus Bosch’s The Garden of Earthly Delights (1500–05), in which there is a perpetual battle between the overarching narrative and the multitude of fine details. In subject matter, too, Bosch’s painting is poised between the redemptive and the perverse. Brown’s style may appear instinctive and rapid, but it is in fact carefully constructed and historically aware. She is constantly looking into the past, while letting her paintbrush guide her forward. She has said, “I take all my cues from the paint” (‘New York Minute’), and this aspect of her practice can be likened to that of American Abstract Expressionists such as Jackson Pollock and Willem de Kooning. It also bears comparison with Francis Bacon’s figurative paintings, in which bodies are often seen in tense relationships; it was Bacon who said that he wanted to create “rivers of flesh” (interview with David Sylvester, Interviews with Francis Bacon, London, 1988, p. 83), a highly appropriate phrase to describe Brown’s own sensuous treatment of the body. Her humming colours – corals, burnt oranges, acrid green and flecks of calm blue – conjure up an almost dream-like state, drawing in the viewer and stimulating the gaze. East of Eden invites a similarly dynamic response. In the catalogue of her 2008 Gagosian exhibition in Rome, Brown intersperses collage-like reproductions of her paintings with texts and close-ups of details, as if to present her associative mind at work. Double-page spreads of explicit sexual imagery, such as Victorian photographs and Baroque paintings, are followed by Brown’s own series of Hogarth-meets-Egon Schiele ink drawings; these are followed in turn by four large paintings, of which East 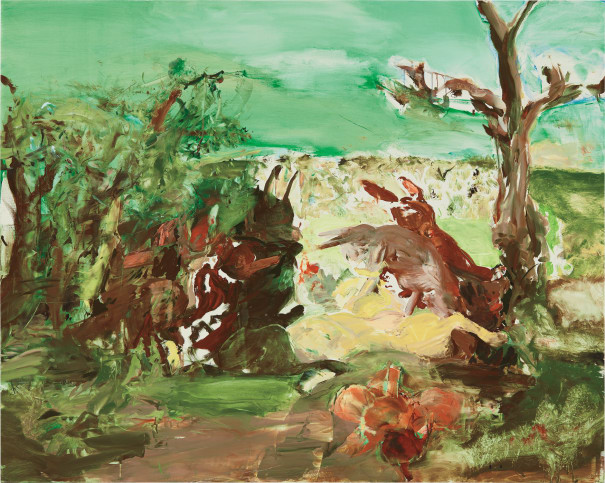 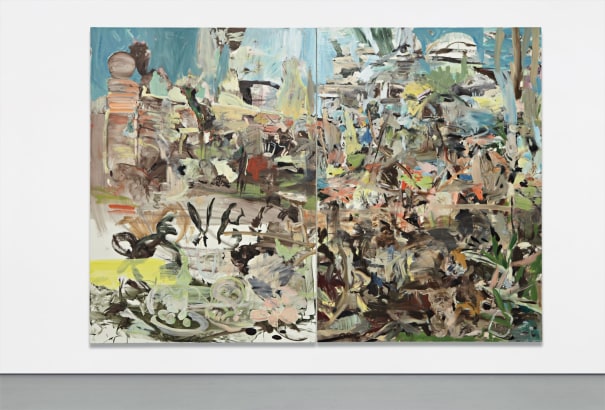 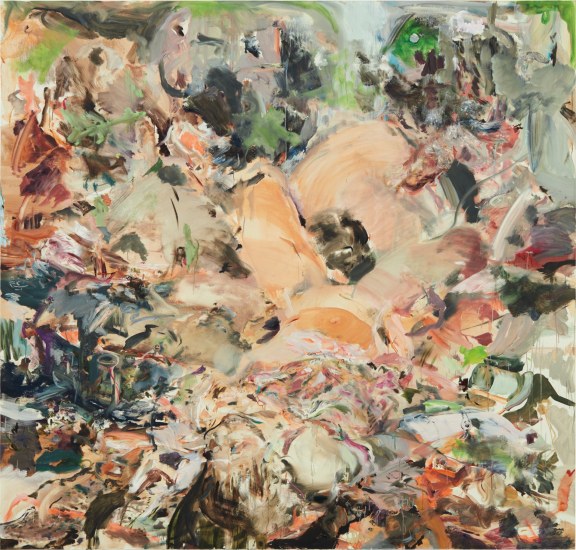 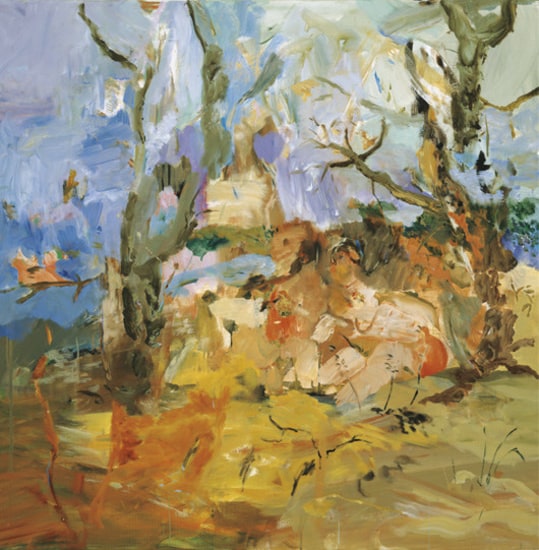 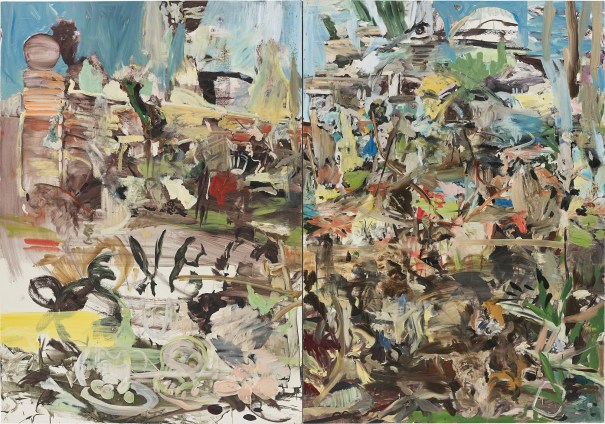 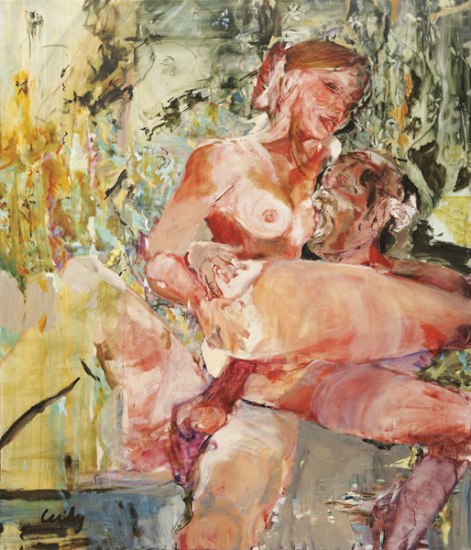 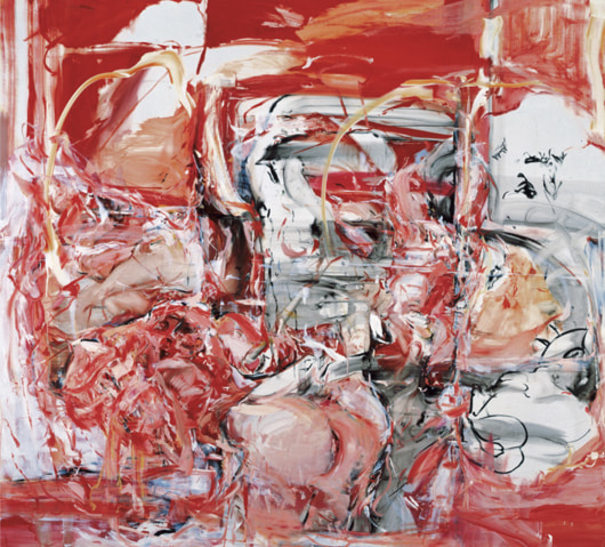 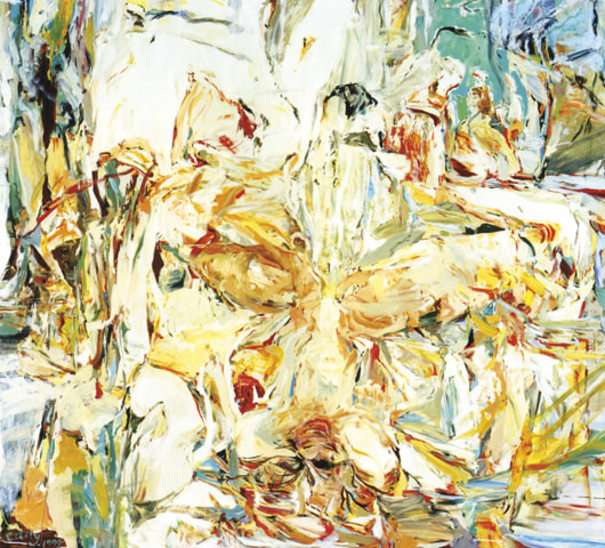 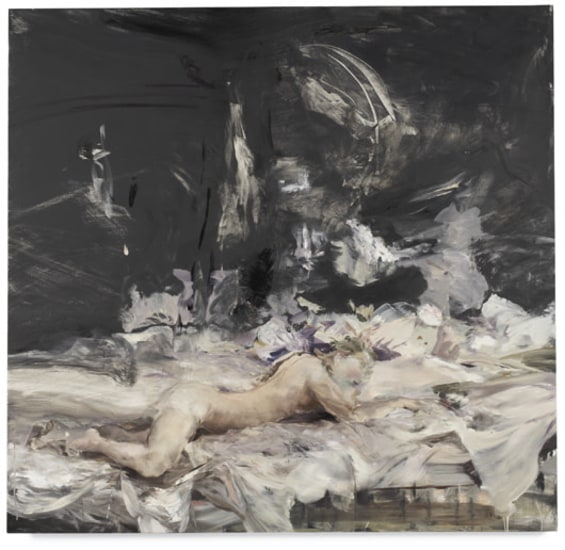 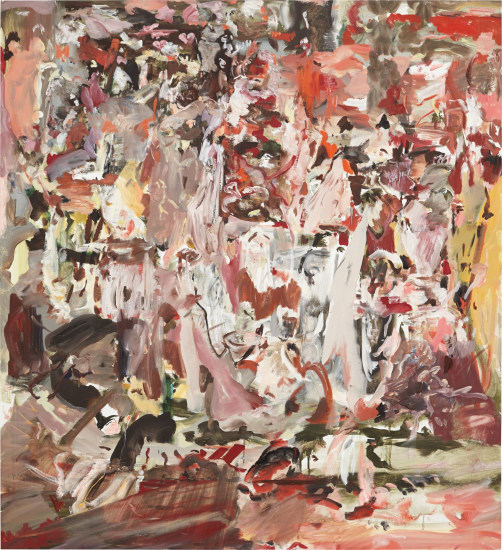