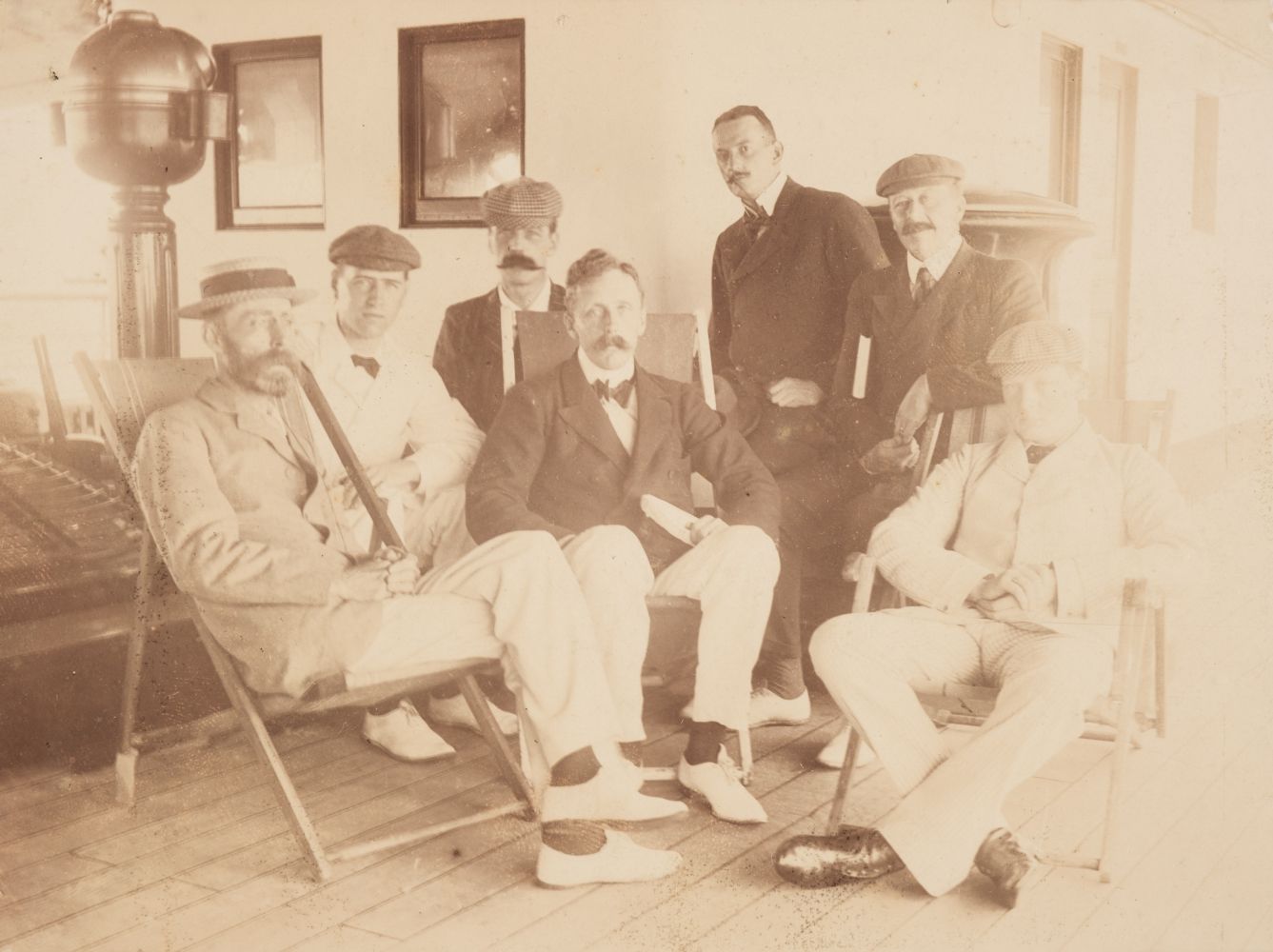 [Churchill, Winston S.]. A small archive of photographs, letters and news cuttings belonging to Henry C. Shelley, 1899-1900, comprising: 8 photographs, all annotated on verso, some taken on board RMS Dunottar Castle, including 1 of Winston Churchill 1 of General Buller, and 2 of Edgar Wallace (1 inscribed in pencil on verso 'Mr Edgar Wallace, Reuters, Author of a Kimberley poem published in the Cape Argus. The Editor sent 1,000 copies for distribution among the troops'); 3 items of shipboard printed ephemera, comprising a 4pp. List of Passengers, listing 'Mr. Winston Churchill and valet', split at hinge and annotated with ink crosses by a number of the names, 'The Dunottar Record', October 28, 1899, 8pp., and a 'Programme of Athletic Sports', October 25 & 26, 1899, 4pp., including such races as 'Chalking the Pig's Eye (Ladies)' and 'Bolster Fight'; 5 autograph letters signed from Harry Shelley to his wife Carrie, 1 on Dunottar Castle headed paper, describing battle scenes, climate and topography, the price of food and laundry, photographs taken and articles written, etc., 1 mentioning Rudyard Kipling's arrival, and another referring to Winston Churchill; a 4pp. 'Prospectus of Lectures by Henry C. Shelley War Correspondent', edge-frayed; and a small quantity of associated newspaper and periodical cuttings, e.g. for The Westminster Budget, and The King, various sizes (Qty: 1) Henry C. Shelley, war correspondent, photographer and lecturer, spent eight months with the British Army in South Africa at the beginning of the Boer War between 1899 and 1900. As his Prospectus of Lectures states, "his experiences embrace actual knowledge and personal eyesight of all the chief events of the War on the Western side", going on to say "he was the only Correspondent who was allowed to make an ascent in the War Balloon, and, during the halt at Bloemfontein, he was accorded special privileges by Lord Roberts to enable him to secure the only pictures in existence of many historic incidents transpiring in that town". Harry, as he was known, travelling on RMS Dunottar Castle in October 1899, came to know another young war correspondent of the time, a certain Winston Churchill with whom it seems he was less than impressed, writing in one of the endearing letters to his wife, Carrie, that one of the men in his cabin was "a perfect gentleman & a right good fellow, but the other (Churchill) is nothing but a cad", adding "when we get up to the front with the other press men it is likely he will have a rough time". By contrast, Shelley found Rudyard Kipling, whom he also met, "exceedingly pleasant ...full of high spirits".

CHURCHILL, Winston S A History of the En