Collection of Nineteenth-Century Newspapers, 1851-1865, Many With Civil War Coverage, Lot of 13 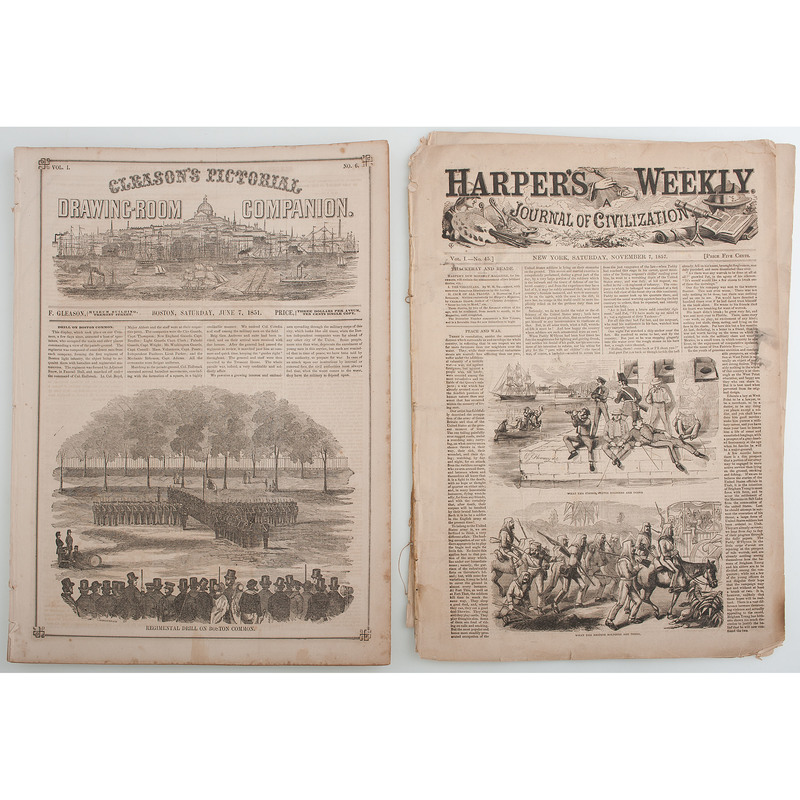 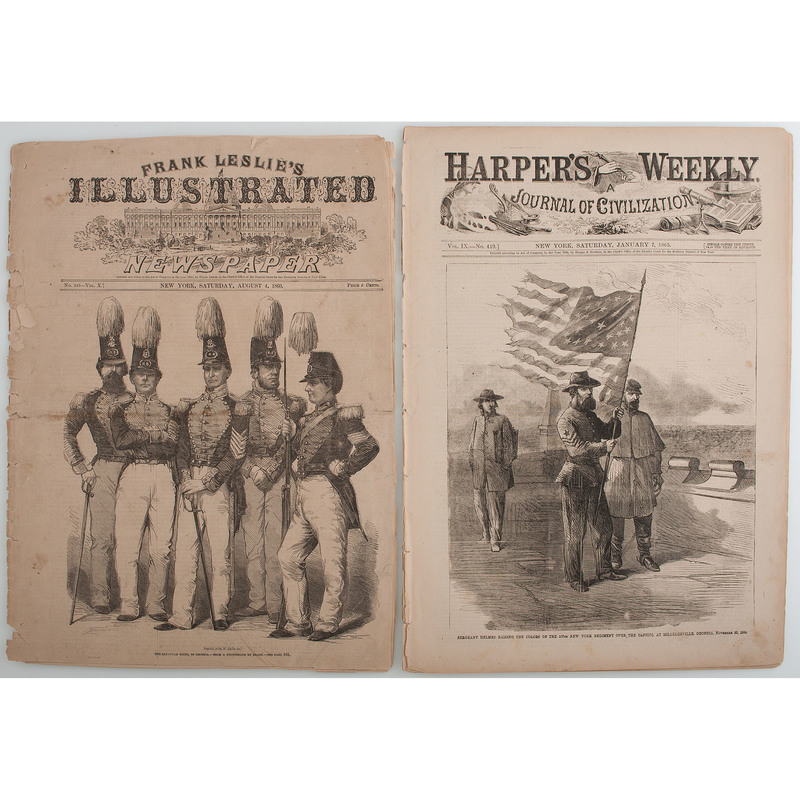 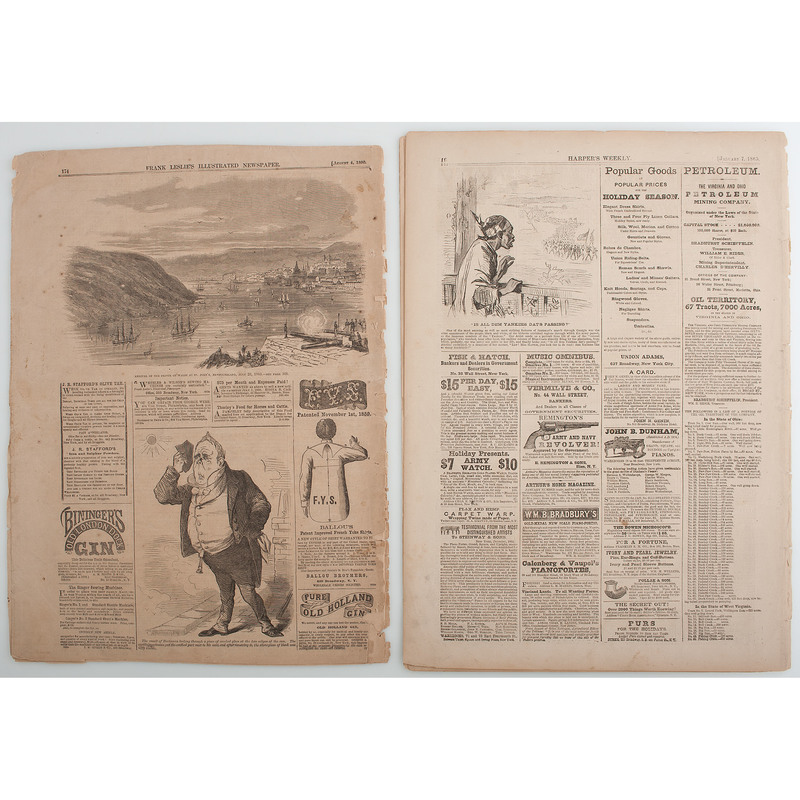 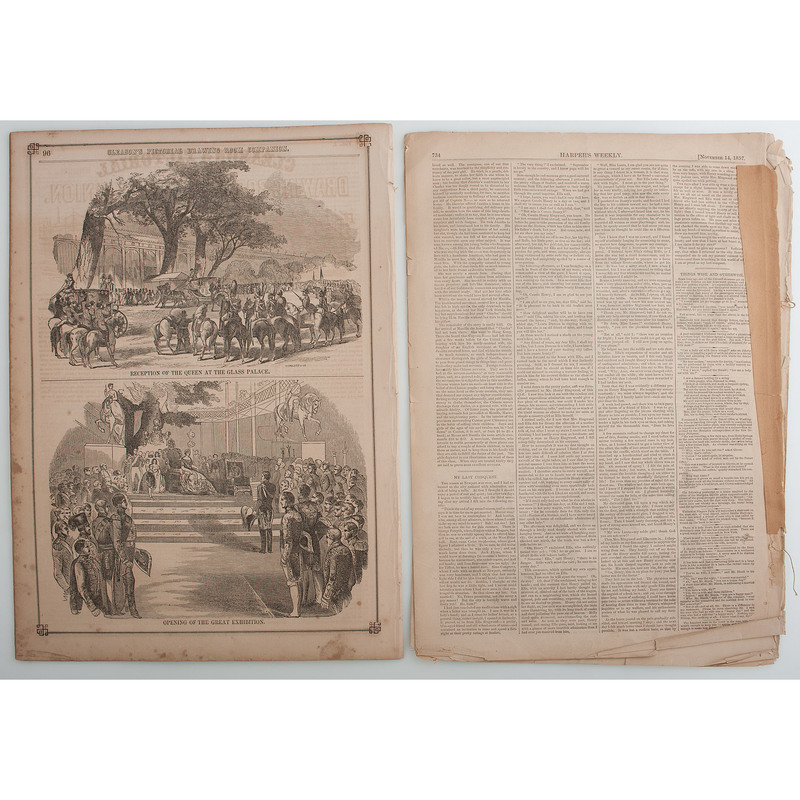 Lot of 13, including 11 bound groupings of Harper’s Weekly, a Journal of Civilization, dating from November 7, 1857 through January 7, 1865, with content related to the Civil War, including illustrations of the Battle of Gettysburg. All published New York, NY: Harper and Brothers, with dimensions approx. 11 x 15.75 in. Most groupings with pages removed, likely illustrations. Collection contains coverage of politics and domestic and foreign news, as well as serialized fiction, essays, and illustrations, often humorous. February 22, 1862 with front page account of the capture of Fort Henry, “one of the most damaging blows of the war,” with illustrations of Commodore Andrew Hull Foote and the gun-deck of one of the Mississippi gunboats engaged in the attack: “At precisely forty minutes past one o’clock the enemy struck his colors, and such cheering, such wild excitement as seized the throats, arms, or caps of the four or five hundred sailors of the gun-boats can be imagined. After the surrender. . . we found that the rebel infantry, encamped outside the fort, numbering four or five thousand, had cut and run. . . [and] left every thing in their flight. A vast deal of plunder has fallen into our hands.” Also with illustrations of a Confederate prison in Richmond, VA, including jailers and a cell interior, after sketches by a former POW. April 26, 1862 with large front page illustration of Major General Henry Halleck on the battlefield; an interesting inside-page article on mob rule: “If the present civil war had broken out in England instead of the United States these mobs would undoubtedly have coerced the British government from time to time. . . mobs, in their sense of the word, are an impossibility here”; and a two-page illustration depicting the Battle of Pittsburgh Landing. July 25, 1863 with front page illustration of Ulysses S. Grant (“Unconditional Surrender Grant”), after “a new photograph just received from Vicksburg”; an inside-page article on the draft riots in New York; and several dynamic battle illustrations of the Siege in Vicksburg and the Battle of Gettysburg. October 1, 1864 with illustrations capturing a scene from General Sherman’s victory, entitled “Rebel Prisoners Being Conducted to Atlanta from Jonesboro,” in addition to a stunning centerfold illustration of Abraham Lincoln holding the flag amidst a crowd of soldiers and sailors, accompanied by a poem urging the nation to “Rally Round the Flag.” Lot completed by Gleason’s Pictorial Drawing-Room Companion. Boston, MA: F. Gleason, June 7, 1851. Vol 1, No. 6. 16pp, 11.25 x 15.75 in. and Frank Leslie’s Illustrated Newspaper. New York, NY: Frank Leslie, August 4, 1860. Vol 10, No. 245. 16 pp, 11.25 x 15.5 in. Condition: General brittleness and wear to corners and edges, along with foxing and areas of staining and discoloration. Some illustrations with contemporary additions in blue, red, and green marker.

A COLLECTION OF NINETEENTH CENTURY WHITE A Small Collection of Nineteenth Century 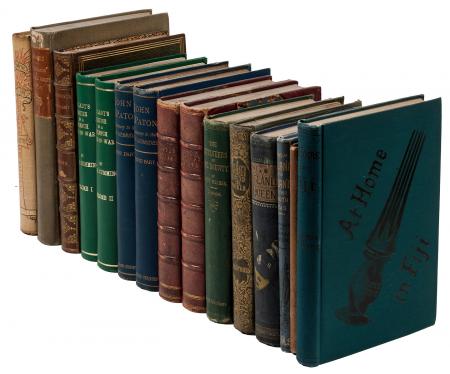 A Collection of nineteenth century

A SMALL COLLECTION OF NINETEENTH AND TWE

A Collection of Nineteenth and Twentieth

A Collection of Indian Costume Miniature

A Collection of 5 Calligraphic Panels, i 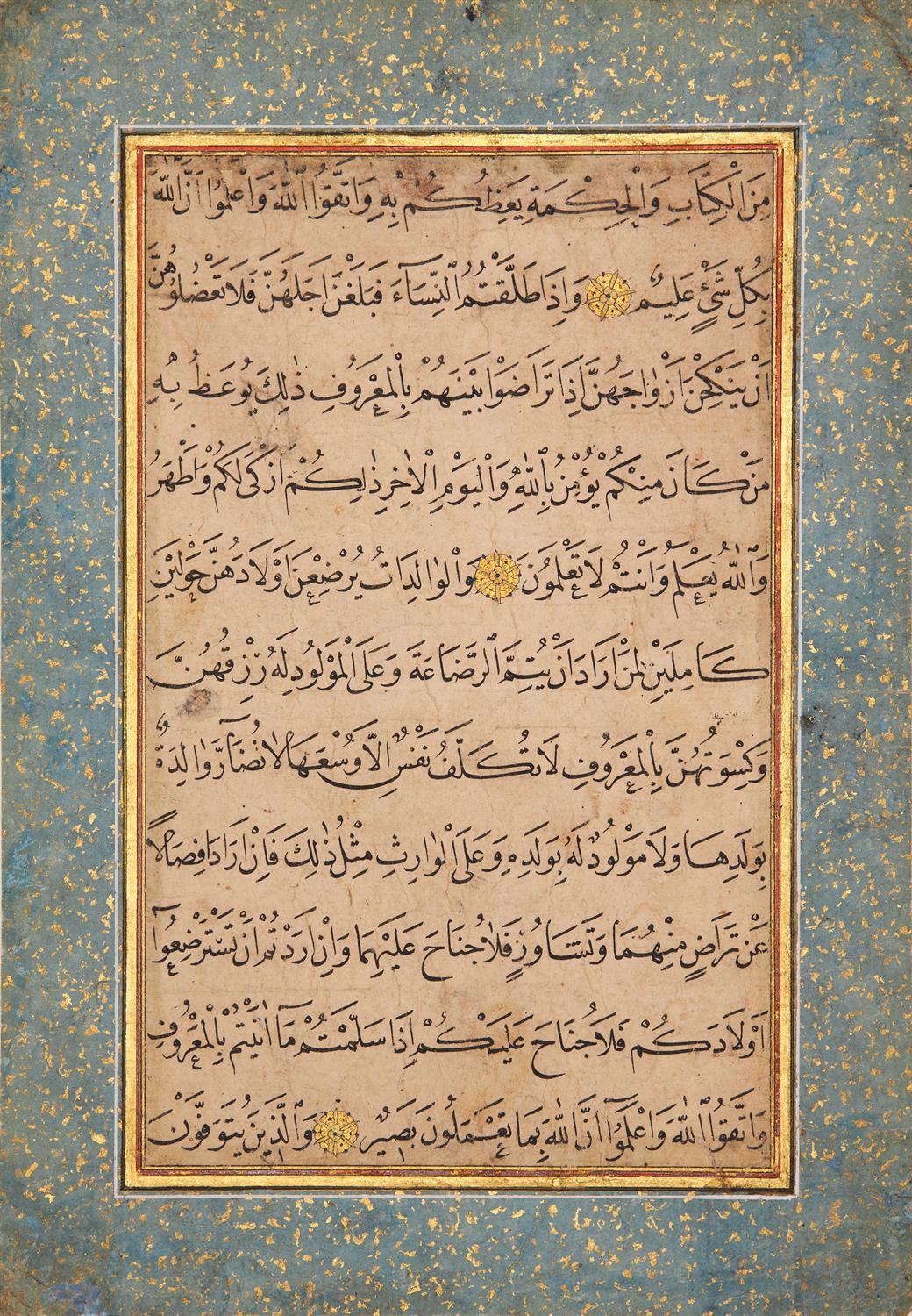 Collection of calligraphic panels, on pa