CONCRETE POETRY--Various. - A substantial collection of Concrete Poetry books and related materials, many extensively and affectionately inscribed by the artists to the British poet Christopher Middleton.

A substantial collection of Concrete Poetry books and related materials, many extensively and affectionately inscribed by the artists to the British poet Christopher Middleton.
Highlights include: 1. Augusto DE CAMPOS , Poetamenos (1953-73). 10 cards (249 x 249 mm), six of which containing concrete poems in various colors. A short introduction in Portuguese and English on the relationship between visual poetry and Anton Webern's “Klangfarben Melodie.” presentation copy inscribed by the poet “for christopher and ann/ love poems/ from/ augusto and lygia,” signed and dated “July 73.” [WITH:] Augusto DE CAMPOS , Viva Vaia, 1972; a postcard signed by the artist; and the sender’s address panel; an envelope addressed by the artist to “Christopher Middeton” containing presentation copy of the book Equivocabulos (135 x 131 mm), signed and dated by the artist, 1971, and the fold-out card VIA LINGUAGEM--2. Haroldo DE CAMPOS , A poesia de Goethe: Problemas de sua “transcriaçao.” Porto Alegre: Instituto Goelte, 3 May 1982. 3 double-sided photocopies (219 x 330 mm) with free autograph note to “Christopher,” signed “haroldo”.--3. Haroldo DE CAMPOS and Giulherme MANSUR , presentation copy of Gatimanhas & Felinuras, colaborações expeciais de paul klee christopher middleton, kurt schwitters (Grafica Ouro Preto, 1994), with a lengthy inscription by De Campos: “My son, Ivan, loves your ‘do not indispose the cat’ poem so much that [he] used it as an epigraph in the first page of his doctoral thesis on chemistry…!”--4. Fernando KEMOS and Roberto CAMPADELLO Stele pour vivre, No. 4. Mallarmé vietcong. Sao Paolo: Décio Pignatari, 1968.-- Ian Hamilton FINLAY Rapel: 10 Fauve and Suprematist Poems, Edinburgh: Wild Hamilton Press, 1963. the first edition of finlay’s first collection of concrete poems. [WITH:] a typed note signed “Ian H F” to “Christopher,” thanking the latter “for your nice wee note…” and concluding, “Je suis a great one for the wee nuances./ I hope you like something in the parcel, anyway”; and a cheque from Lloyd’s Bank for one pound, paid to the author and signed by him on the reverse. a comprehensive cross-section of concrete poetry, containing seminal printed works and intimate autograph notes by its founders. Concrete Poetry--a visual incarnation of verse--is as old as the alphabet, however this form of transforming words into art assumed new meaning in the 1950s, in the hands of Oyvind Fahlstrom (1953), Eugen Gomringer (1953) and the Noigandres Group--Augusto De Campos, Haroldo De Campos and Decio Pignatari (1955)--whose seminal works appear in the present archive. These artists manipulated words like sculptures on a page, purposely creating new meaning literally and visually. Their manifesto, published at Sao Paolo in 1958, influenced poets internationally. In the poets’ own words, “concrete poetry begins by assuming a total responsibility before language: accepting the premise of the historical idiom as the indispensable nucleus of communication, it refuses to absorb words as mere indifferent vehicles, without life, without personality without history - tabu-tombs in which convention insist on burying the idea.” The Scottish poet Ian Hamilton Finlay was among those inspired by the Brazilian movement. His first collection of poems is included here, as well. Christopher Middleton (b.1926), to whom many of the works are inscribed, is a renowned poet in his own right. As Professor of Germanic Languages and Literature at the University of Texas, Austin, from 1966 until 1998, Middleton corresponded frequently with the most influential modern poets, and translated many of their works. Comprising approximately: 10 books, 8 posters and 92 booklets and ephemera. Full contents list available upon request.

Group of Poetry from California

Page. Number Ed. Ph. Dobree and A. Self. 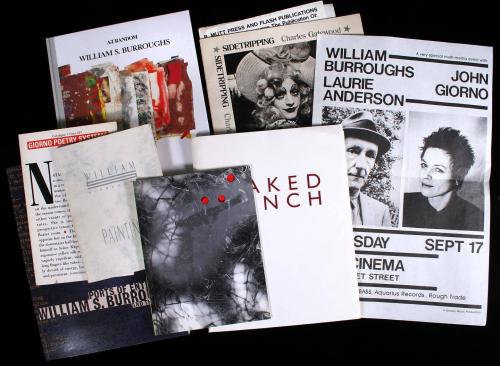 A selection of works by Steve Richmond