CONRAD, JOSEPH. Autograph letter signed ("J. Conrad") TO ARTHUR SYMONS, n.p. [Someries, Luton], 29 August 1908. 5 pages, 4to, on the rectos of 5 lined sheets removed from a notebook pad leaving upper edges a bit jagged. "I'VE TRIED TO WRITE WITH DIGNITY...FOR THE SAKE OF THE SPECTACLE" An exceptional letter. "I doubt whether I have expressed sufficiently that sort of special pleasure the recognition of my work by a man like you was certain to give me. That feeling partaking of shyness and delight is difficult to express. And the characteristic generosity of the recognition has almost frightened me. Meditating the trouble you have taken over the pages I feel remorseful also -- as though I had cheated you -- not your intelligence that would be impossible, but your benevolence and perhaps your hopes a little -- just a little. A reader like you puts so much of his own high quality into a work he is reading directly the writer has been lucky enough to awaken his sympathy! I am afraid that you have given without counting -- and yet would be glad to believe that I deserve this profusion; for indeed what you give is eminently worth holding. "One thing that I am certain of, is that I have approached the object of my task, things human, in a spirit of piety. The earth is a temple where there is going on a mystery play childish and poignant, ridiculous and and awful enough, in all conscience. Once in I've tried to behave decently. I have not degraded any quasi-religious sentiment by tears and groans; and if I have been amused or indignant I've neither grinned or gnashed my teeth. In other words I've tried to write with dignity, not out of regard for myself but for the sake of the spectacle, the play with an obscure beginning and an unfathomable dénouement . I don't think that this has been noticed...I've been called a heartless wretch, a man without ideals and a poseur of brutality. But I will confess to you under seal of secrecy that I don't believe I am such as I appear to mediocre minds. "But enough. You have, unexpected, like a burglar, forced the lock of the safe where I keep my stock of megalomania. So I don't apologize for these worthless outpourings. It's your fault clearly, but you shall be no longer punished. As I wrote to a friend lately I have been quarrying my English out of a black night, working like a coalminer in his pit. For fourteen years now I have been living as if in a cave without echoes. If you come shouting gloriously at the mouth of the same you can't really expect from me to pretend I am not there. I am profoundly touched by your letter but that I am sure you understand already...P.S. We are going off today to stay near Ford Madox Hueffer [Ford] in Aldington...Should you hear anything of the play a letter will find me there for the next fortnight. I will be struggling desperately with a novel. [ Under Western Eyes ] now already overdue." See Frederick R. Karl, Joseph Conrad: The Three Lives (New York, 1979), pp. 151, for a discussion of the Conrad-Symons relationship (Karl refers to this important Conrad letter and quotes the passage beginning "The earth is a temple..."): "Toward the end of August, Conrad began [starting with this letter] a fairly long correspondence with Arthur Symons, who had written and sent on a study of him [rejected for publication]. Symons, earlier, in 1898, had commented [negatively] on The Nigger [ of the "Narcissus" ] and Kipling's "Captains Courageous" ...The comment had pained Conrad to such an extent that he wrote an (unsigned) article on Kipling defending him and his own work. Now Symons had returned, with a deeper understanding of Conrad and with a more considerable reputation himself...Conrad's association with Symons was capped by the latter's little book Notes on Joseph Conrad , published [in 1925] the year after Conrad's death." Published in G. Jean-Aubry- Joseph Conrad, Life and Letters (1927), pp. 83.4 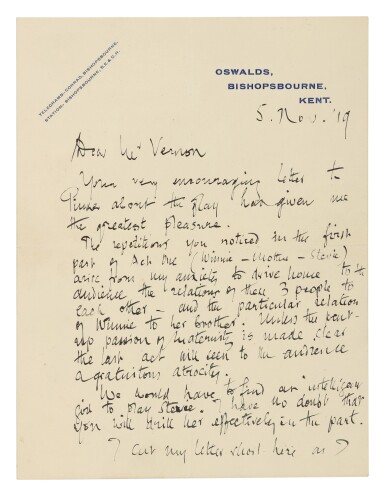 Conrad, Joseph | A letter regarding char