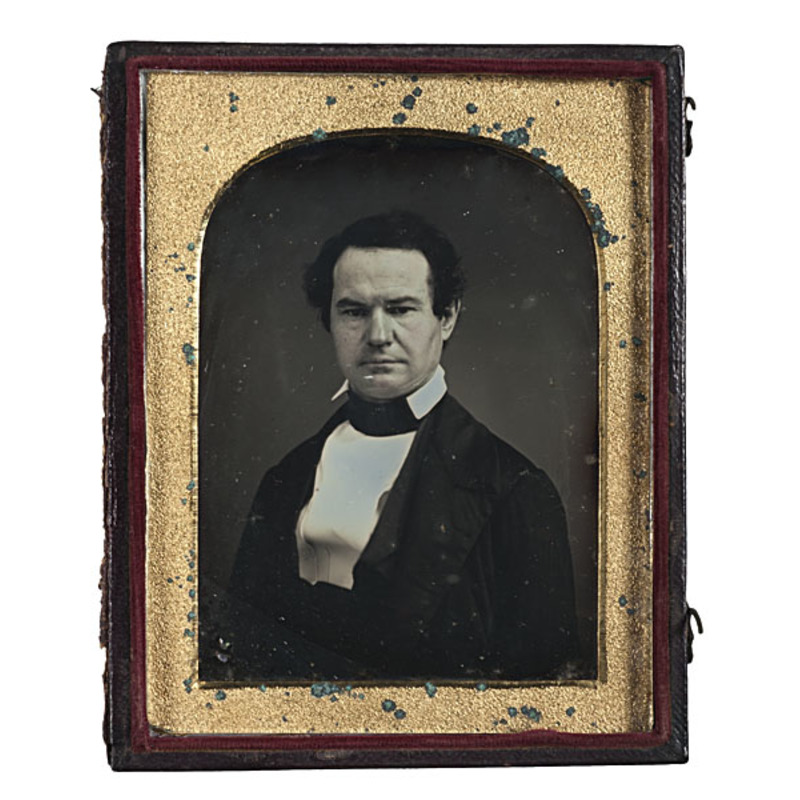 Lot of 2, including quarter plate daguerreotype of George D. Prentice, under a simple arch-top mat and glass, and housed in pressed paper case separated at the spine, with an inscribed note pasted to the pad reading George D. Prentice. Ed. of the Louisville Journal / Presented to A.L.R. Dufour by the Original {June 1851}; plus Prentice's Biography of Henry Clay. Second Edition. New York: John Jay Phelps, 1831. 8vo, leather boards with gilt spine lettering, 312pp. George Dennison Prentice (1802-1870) was raised on a farm in Connecticut and graduated from Brown University in 1823. He first tried his hand at law, but was more interested in writing and jumped at the chance to become editor of the New England Review in 1828. Readers soon took note of his talents and he was recruited to Louisville in order to pen a campaign biography for Henry Clay, which, although popular and well-received, earned him no money due to the publisher's business failure. Needing money and finding himself incensed by the editorial stance of the city's own paper, he sought financial backing and founded The Louisville Journal in 1830, quickly gaining an audience by initiating a public feud with his crosstown competition. His newspaper was supportive of the Know-Nothing party, and his rabidly anti-Catholic and anti-immigration editorials led in large part to the Riots of 1855, which resulted in the deaths of 21 Louisvillains. Although Prentice supported the Union in the 1850s, he disagreed with many of its policies during the Civil War. He joined a group in 1861 that urged Kentucky not to secede from the Union but to establish itself as a neutral party in the war. Following the war, Prentice also opposed many of the Reconstruction policies, and he expressed his discontent through his editorials. After the newspaper merged to create the Courier-Journal, Prentice remained editor of the paper. He died of influenza in 1870. This lot, plus lots 104 and 105, were part of a larger grouping related to Amanda Ruter Dufour, which surfaced in the inventory of an antiques business that closed in the northern neck of Virginia in the 1970s. Amanda Dufour (nee Ruter) was a native of Indiana, and at the time these photographs were taken, was the wife of a prosperous New Albany merchant. New Albany is immediately across the river from Louisville, thus explaining the presence of the Prentice daguerreotype. Her connections also explain the Whitcomb daguerreotype. Dufour, like Bolton, was noted as a poet and lyricist, and as an Indiana native would have no doubt known Bolton quite well. A picker turned up the grouping which included these three cased images, plus diaries, numerous books with Dufour's maiden name inside, and various unidentified daguerreotypes and ambrotypes. Condition: Tarnishing at upper top and bottom of matt edges, and on the mat. Subject is unaffected, and the portrait exhibits nice clarity. Book's cover well worn. Interior leaves with foxing, minor stains, and pencil notes throughout, but binding is intact and text fully legible.