IRELAND – WOLFE TONE, TEELING AND THE RISING OF 1798 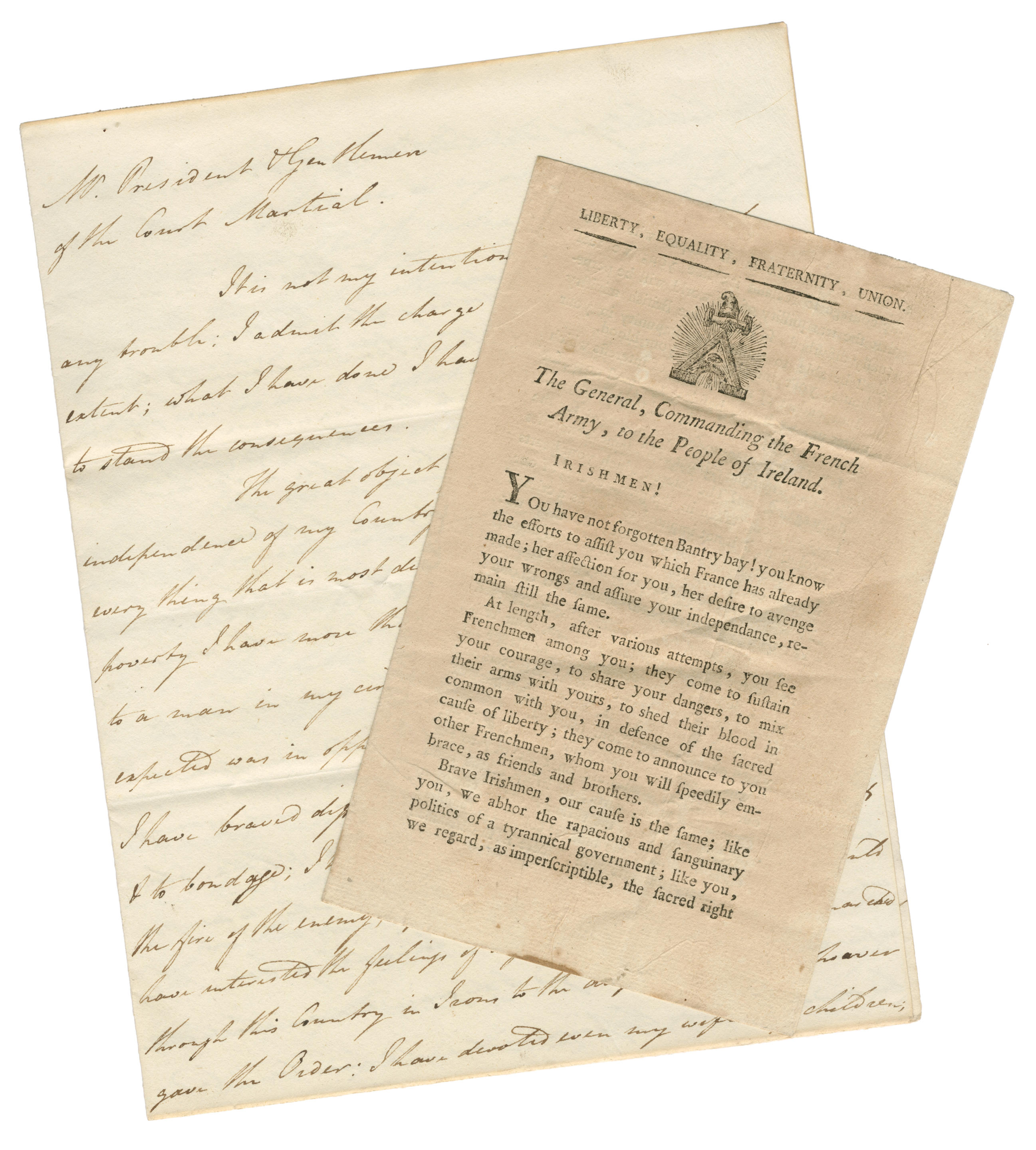 IRELAND – WOLFE TONE, TEELING AND THE RISING OF 1798 Files of documents, kept by George Hewett, Adjutant-General of the British Army in Ireland 1791-99 and Commander-in-Chief of Ireland, 1813-16, comprising: (i) Printed proclamation headed 'Liberty, Equality, Fraternity, Union' with drop-head title 'The General, Commanding the French Army, to the People of Ireland', issued by General Jean Hardy opening: 'Irishmen!/ You have not forgotten Bantry bay! you know the effects to assist you which France has already made; her affection for you, her desire to avenge your wrongs and assure your independence, remain still the same./ At length, after various attempts, you see Frenchmen among you...', with wood-cut vignette at head showing clasped hands beneath a liberty bonnet, above masonic dividers and eye at centre from which expand the sun's rays, 3 pages, on a bifolium, originally folded into a smaller packet, some very slight time-staining especially to first page, very small stain at foot of lower margin, but overall in fine, unpressed original condition, 8vo (186 x 120mm.) [EST T230253, one other copy recorded, in the National Library of Ireland], [Dublin, 1796?] (ii) Memorandum on the defence of Ulster [by General John Knox Commander-in-Chief, County Tyrone, and submitted to Adjutant-General Hewett], opening: "The Experience of this year has proved that the body of the people of Ulster are inimical to Government, & are ready to rise into rebellion whenever an opportunity presents itself. The Salutary measures of Government & the exertions of the military have checked the people of Ulster in their Career of treason: but the opinions of men are not to be changed by Violence, &, although the People may return to their old manner, Servility must not be mistaken for attachment..."; and going on to list troop deployments and the like, 7 pages, some dust-staining etc., 4to, Derry, 25 September 1797, docketed by Hewett "Mem[orandum]/ Ulster – 25th Sepr. 97" (iii) Memorandum, seemingly autograph and signed, by General John Knox Commander-in-Chief, County Tyrone, on the defensive possibilities of Lough Swilly, opening: "In the Memoir on the Defence of Ulster, that I lately had the Honor to transmit to you, I observed that the landing Places on the Shores of Lough Swilly were so many, that it would be to throw away Guns to establish regular Batteries to prevent an Enemy from landing – The Garrison of Derry, I mentioned, should give every Annoyance in its Power, without however committing itself..."; headed "Lough Swilly"; docketed by Hewett "Nov.r 1st 1797/ Lough Swilly", 4 pages, on paper watermarked with Britannia within crowned shield and 'I Sullivan', some dust-staining, especially where folded for delivery and filing, folio, Derry, 1 November 1797 (iv) File of contemporary transcripts relating to French plans to invade Ireland, prior to the '98, comprising the "Report of the Citizen Director Carnot, made to the Executive Directory – 11th Brumaire 5th Year &c" with attached "Summary of two plans of attack upon England & Ireland, & the means of uniting them" by Barras, 9 pages, originally folded into a packet, stitched, folio, [1 November 1796]; 'Adjutant General T.W. Tone, dit Smith, au general Hardy, commandant en chef l'armée françois expeditionnaire", marked "copy", 1 page, plus integral blank, paper watermarked 'G Taylor/ 1794' with crowned Britannia, folio, 16 Brumaire an 6 [6 November 1797]; "Le Ministre de la Marine & des Colonies au General de Brigade Humbert", 4 pages, watermarked 'A Blackwell/ 1796' and with crowned Britannia, folio, Paris, 1 thermidor an 6 [19 July 1798] (v) Bartholomew Teeling's intended speech from the dock (which he was prevented from delivering), docketed "Teeling to the Court" and "Teeling's Speech", 2 pages, with integral blank, Whatman paper watermarked 1794, 4to [c.24 September 1798] (vi) File of contemporary transcripts of letters by Wolfe Tone and other United Irish leaders from the '98, and rela