Jean-Michel-Basquiat and Andy Warhol Untitled 1984 acrylic, oil and silkscreen on canvas 85 7/8 x 68 1/8 in. (218.1 x 173 cm) Signed “Andy Warhol, Jean-Michel-Basquiat” on the overlap.
Provenance Galerie Bruno Bischofberger, Zurich Akira Ikeda Gallery, Japan Private collection, Japan Exhibited Tokyo, Akira Ikeda Gallery, Collaborations: Jean-Michel-Basquiat & Andy Warhol September 8 – September 30, 1986 Literature Collaborations: Jean-Michel-Basquiat & Andy Warhol Akira Ikeda Gallery, Tokyo, 1986, pl. 3 (illustrated) Catalogue Essay Andy Warhol and Jean-Michel-Basquiat joined forces in the 1980s to form one of the greatest artistic collaborations of the Post-War era. Their friendship began at a remarkable junction; Warhol’s practice was achieving a sophisticated maturity, and Basquiat’s career was just beginning. The friendship of these two very different figures—one of the foremost art figures of the time, and the wünderkind of the 1980s—aided each man’s mission to continue creating the most dynamic works of the Twentieth Century. Basquiat lent an expressive painterly quality and a touch of mischief to Warhol’s synthesis of images and media icons. While each of their styles is unique, their combination yields bold and symbiotic works. The present lot, Untitled, 1984, is a striking homage to the styles that defined both artists’ work and celebrity. Here we see a synthesis of two visual languages, which, together, create a compelling dialogue. We see both Warhol’s stylized use of corporate logos in the placement of “Del Monte”, of which he created an entire body of work in the 1960s, as well as Basquiat’s visceral and raw style. Both artists’ use of popular culture creates a harmonious portrait of both the times and styles in which they were working. Untitled, 1984 is bold and visually complex in its use of color and collage. In order to create this collaboration, the artists would alternately layer the canvas with their distinct brands – instead of creating a disjointed painting, the result is one of dynamic and powerful tension between past and present, seasoned master and young prodigy. Here, the chaos of the composition celebrates the frenetic exhilaration of youth and the cumulative experience of age. As a means to garner fame and recognition, Basquiat began his career as a graffiti artist under the name SAMO (Same Old Shit). Andy Warhol had solidified his reputation as the Pop Art icon of the previous two decades, and represented the kind of success that Basquiat desired for himself. The energy and hype that began to surround Basquiat was precisely what caught Warhol’s attention; he had invaded the New York art world with a force and style that hadn’t been recognized since Warhol’s own arrival. Warhol had initially been reluctant to acknowledge the teenage Basquiat, perceiving him as inexperienced upstart, but his respect for Basquiat grew after the two collaborated on a photo shoot at the Factory. The pictorial language that had defined Basquiat’s style—money, politics, and death—concerned Warhol in previous decades, and while he was wary of Basquiat’s quickly rising success, he recognized a shared thematic symbolism. Basquiat’s energy and youth represented something fresh and urban; as Ronnie Cutrone said “Jean-Michel thought he needed Andy’s fame, and Andy thought he needed Jean-Michel’s new blood. Jean-Michel-gave Andy a rebellious image again” (V. Bockris, Warhol: The Biography, Cambridge, 2003, p. 461-2). The process of creating a Collaboration was one of give and take. Each artist used the materials for which they best known; silkscreen ink for Warhol, Paintstick for Basquiat. Typically, Warhol would be the first to lay down his images. Once the graphics were selected and placed, Basquiat would fill in the remaining areas of the canvas with his signature blocks of color, childlike scrawl, and totemic heads with spiky hair. As Basquiat would later recall, “[Andy] would start most of the paintings… he would put something very concrete or recognizable like a newspaper headline or a product logo and then I would sort of deface it…” (Jean-Michel-Basquiat as interviewed by Tamra Davis). One of the gr 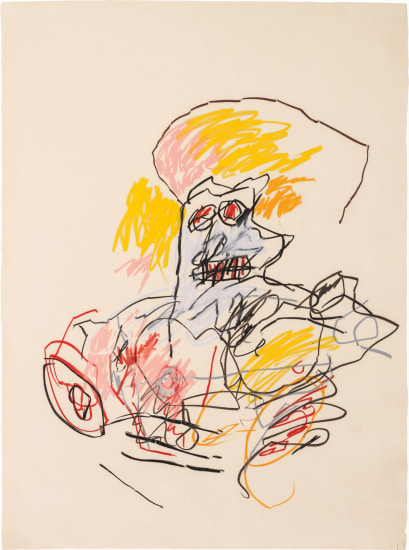 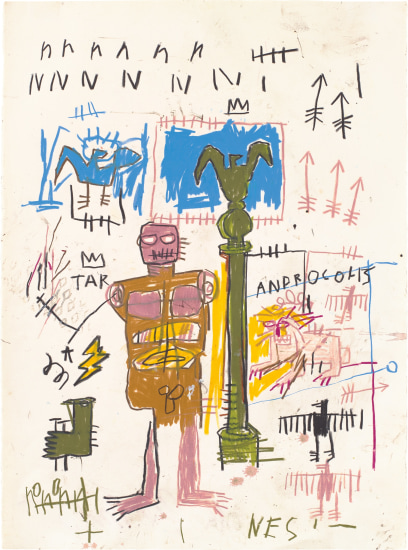 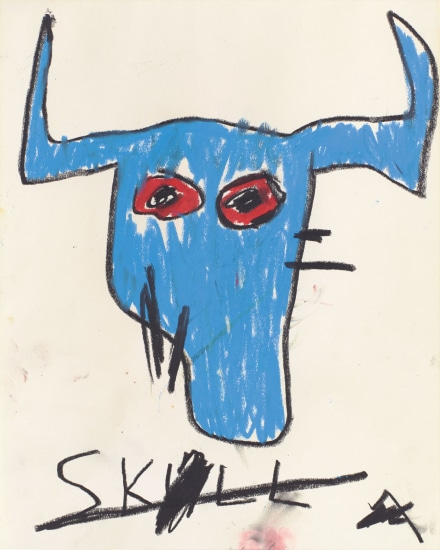 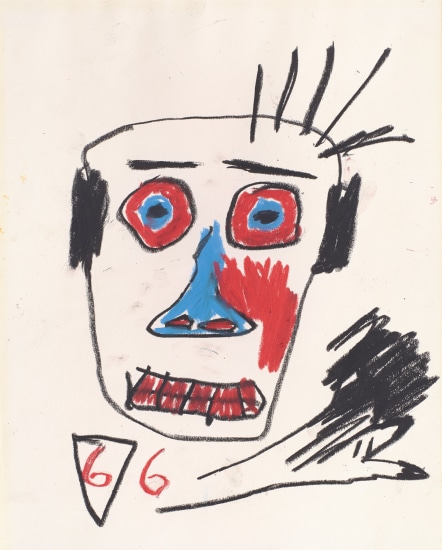