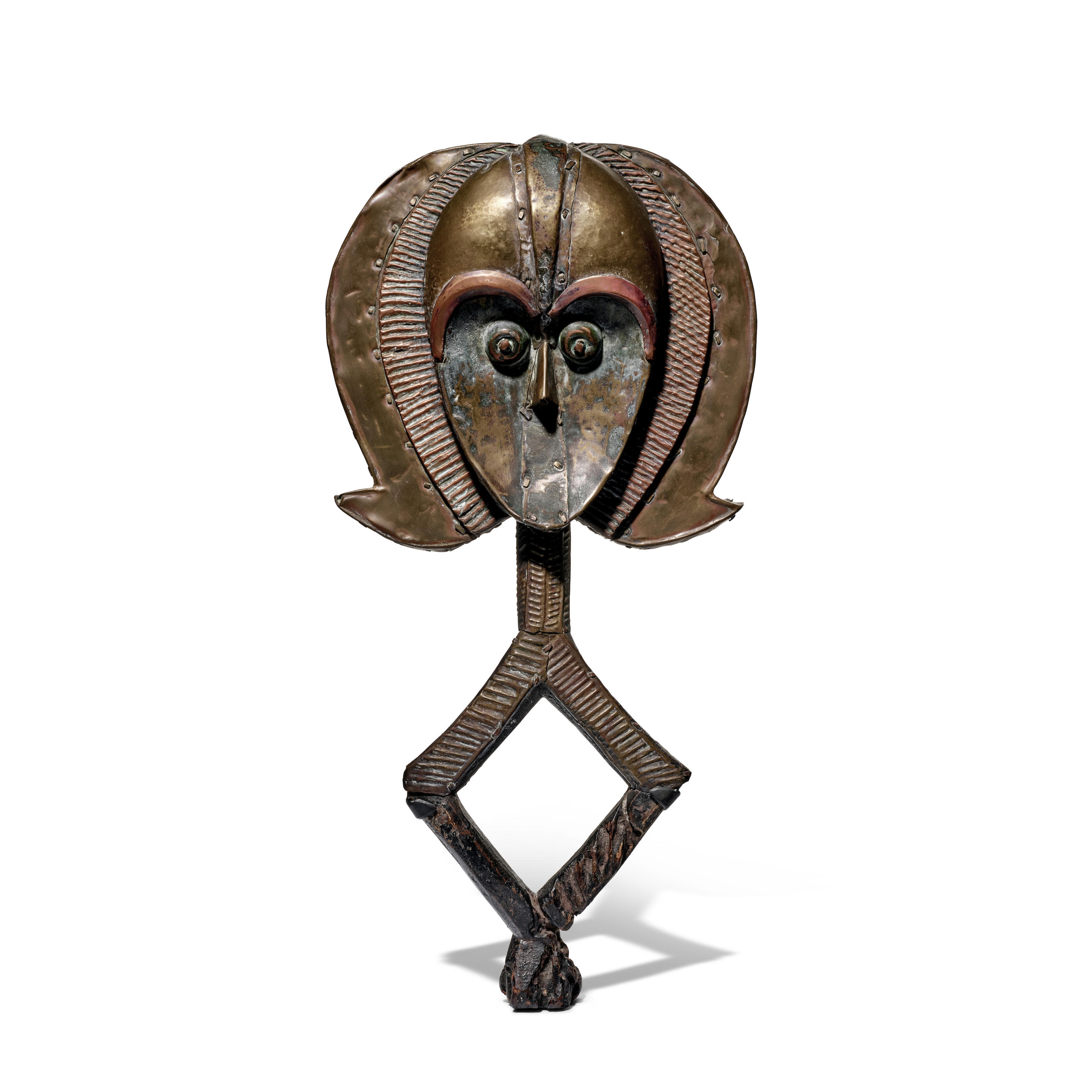 mbulu ngulu Wood, brass, copper, nails height 19 1/2in (49.5cm) Provenance Mathias Komor Gallery, New York Robert and Nancy Nooter Collection, Washington, D.C., acquired in 1971 Published Robbins, Warren (Introduction), African Art in Washington Collections, Museum of African Art, 1972, pg. 41 Exhibited Washington, D.C., African Art in Washington Collections, Museum of African Art, 1972 Washington, D.C., Life Afterlife, Museum of African Art, 1982 Washington, D.C., National Museum of African Art – Smithsonian Institution, 1987 – 2004 William Rubin notes, 'Taken together, the Kota and Hongwe reliquary figures--certainly the most abstract of the tribal sculptures Picasso encountered--constitute, along with Baga figures and Fang masks and reliquary heads, the most important African prototypes for his art from June 1907 until the summer of the following year. The painter owned two Kota reliquary figures and though there is no documentation, photographic or otherwise, as to when he acquired them, the simplicity, rawness, indeed the very mediocrity of both of them--quite apart from their influence on his work in 1907--suggest that they were among the earliest tribal objects he acquired. By the start of World War I, Paul Guillaume possessed some very fine Kotas, but Picasso seems not to have reached for these (in part, no doubt, because they were very expensive.) The lozenge-shaped lower supports for the heads of the Kota reliquary guardians are usually taken--wrongly, the specialists tell us--as legs. And the readings by the modern artists were no exception. If we imagine them as legs, the reliquary figure as a whole suggests a dancer--as we see in the little leaping personage in Klee's Idols--whose heels are together and whose knees are splayed out in profile below the frontal head. Picasso was evidently sufficiently fascinated by this bent knee position to explore it in a large drawing, which was extrapolated in paintings such as Nude with Raised Arms known generically as "Dancing figures" or "African Dancers."' (Primitivism in 20th Century Art, The Museum of Modern Art, New York, 1984-5, vol. 1, pp. 266-7) Archetypal of the Ndassa style whose distinguishing feature is the lack of the crescent-shaped crest (Perrois, Louis, Kota, 5 Continents, 2012, p. 152, p. 49), the artist has intricately crafted and pierced the work together like a collage. The large lateral buns plated with copper form a large, heart-shaped halo against which the rounded face forcefully emerges, composed by a sheet of contrasting yellow brass. Strips of copper form arching brows on the forehead offer red accents along with the large, studded cabochon eyes in copper. The lower strip on the face gradually flares out in trapezoidal form and lacks any notation of a mouth. At the base of the lateral buns, tabs, possibly representing ears, project outwards. The cylindrical neck is wrapped in brass with linear design, above an openwork lozenge-form base, the upper half encased in brass highlighted with similar vertical lines. The exposed wood on the reverse side with a central raised diamond. 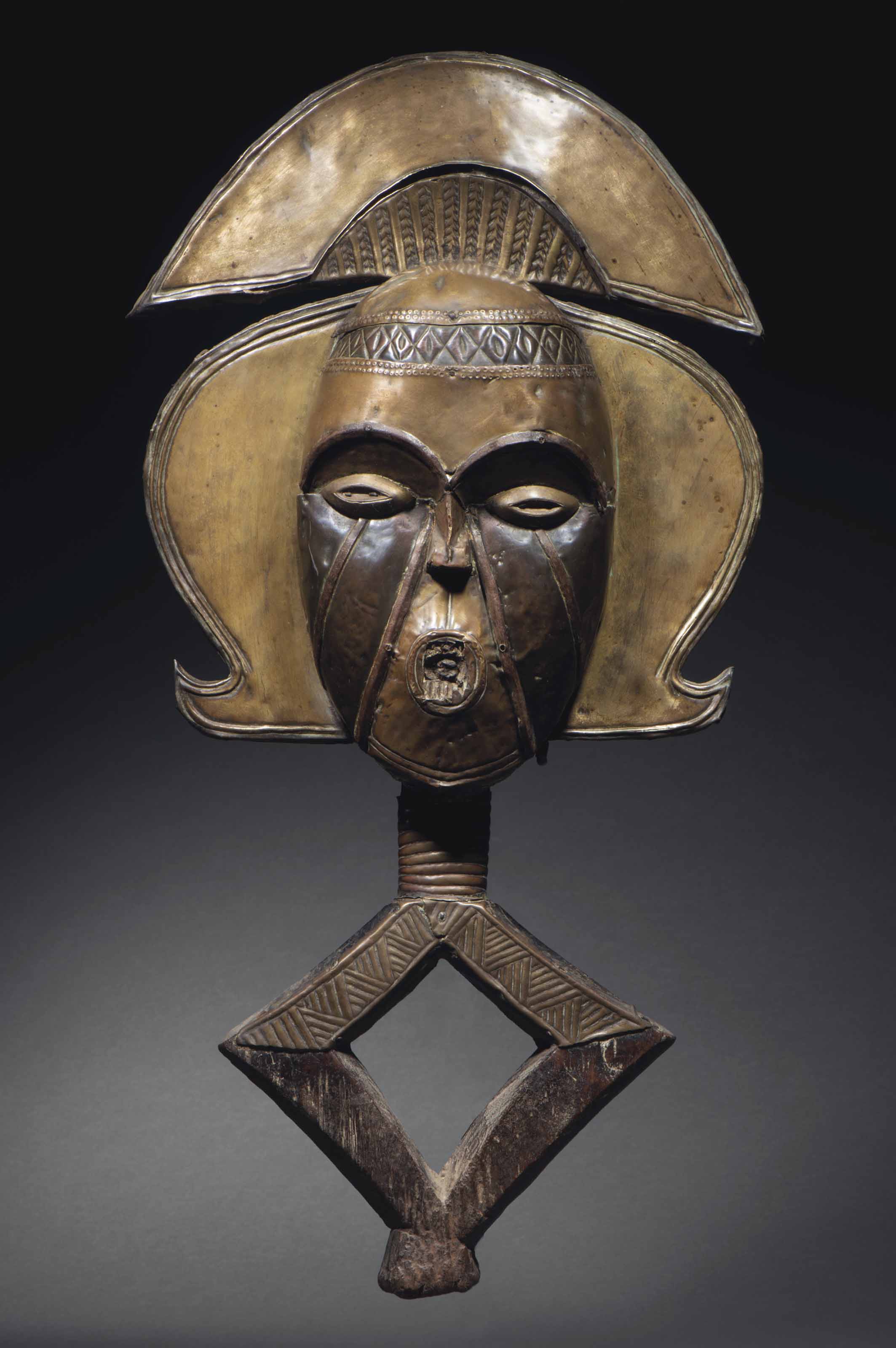 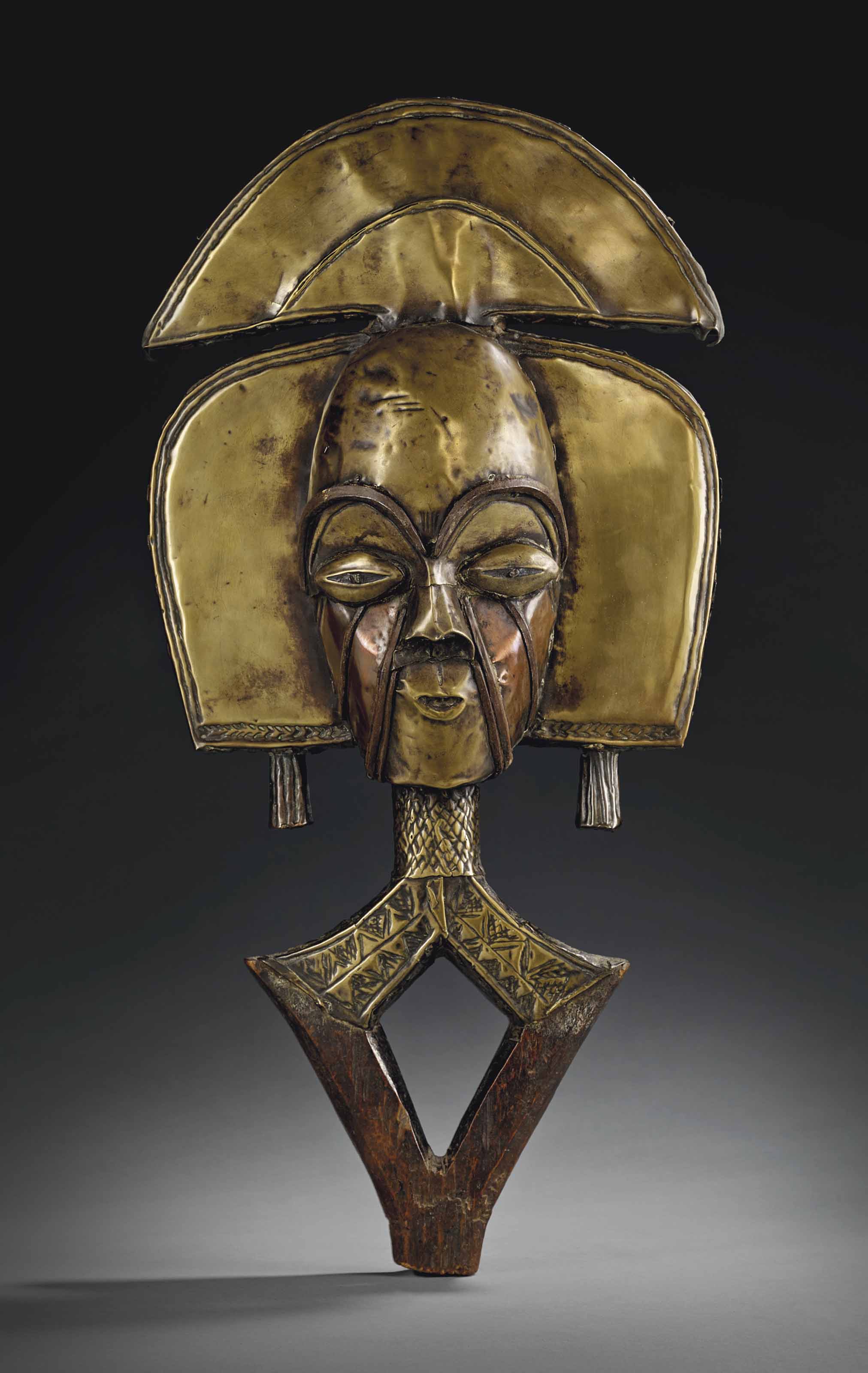 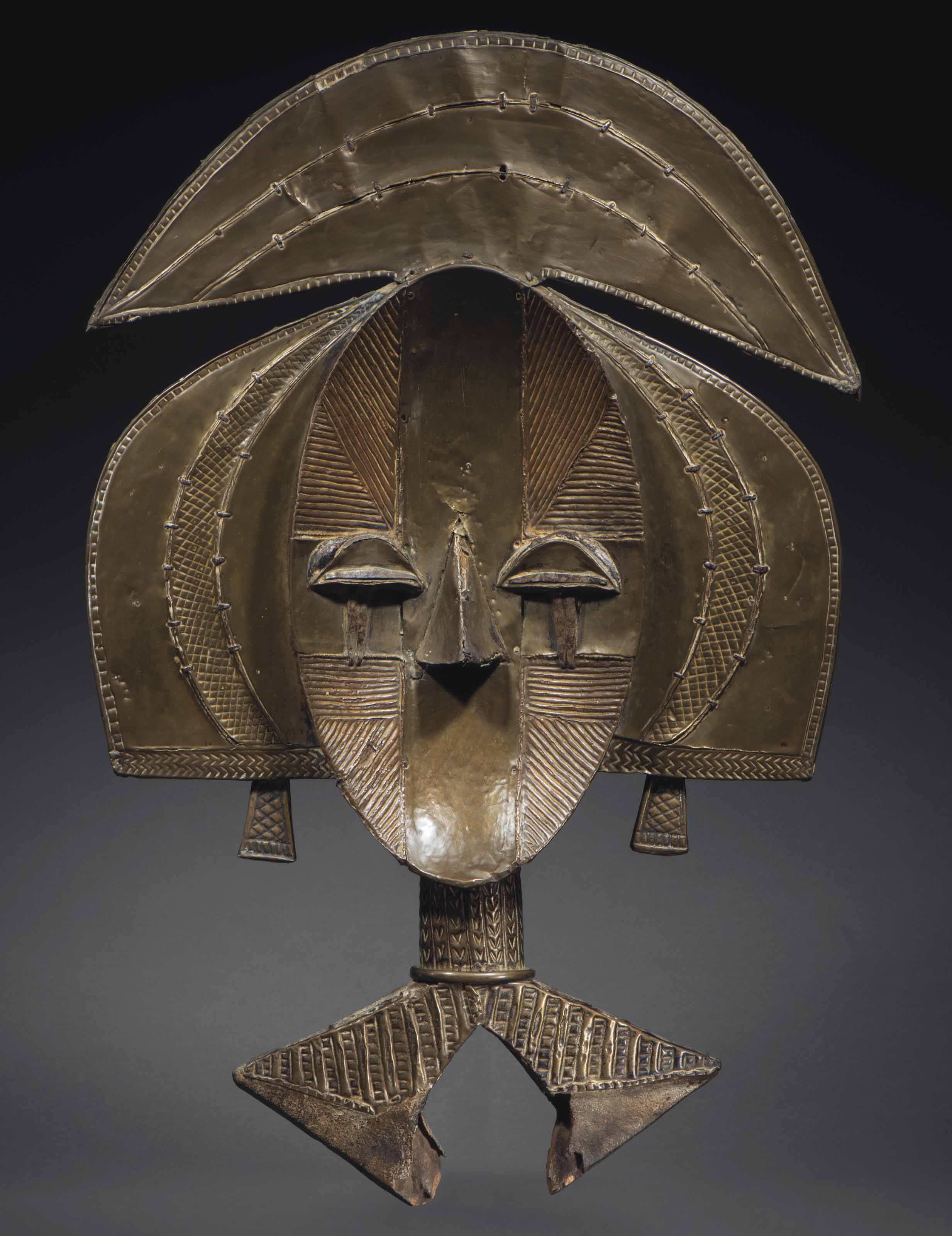 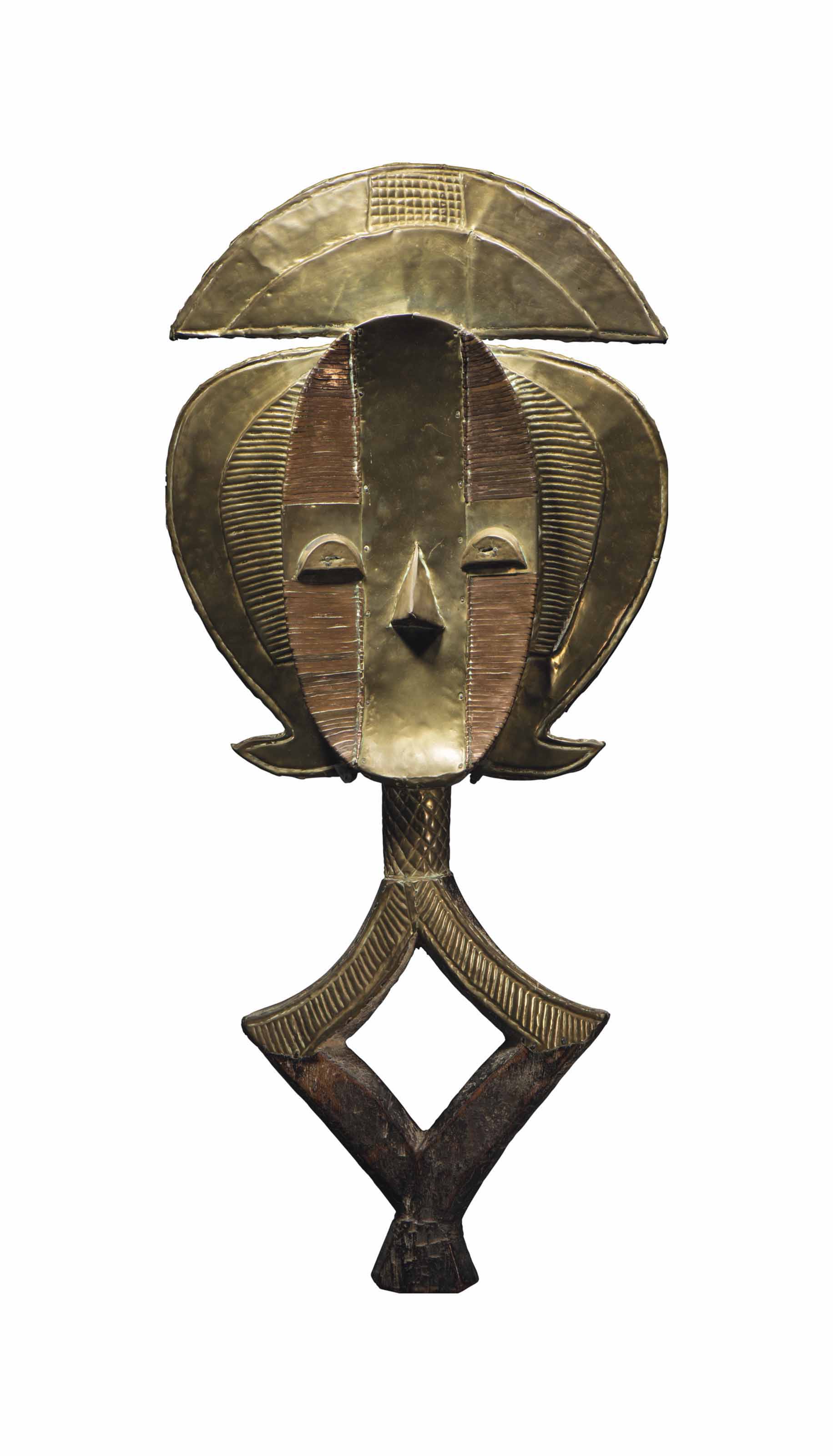 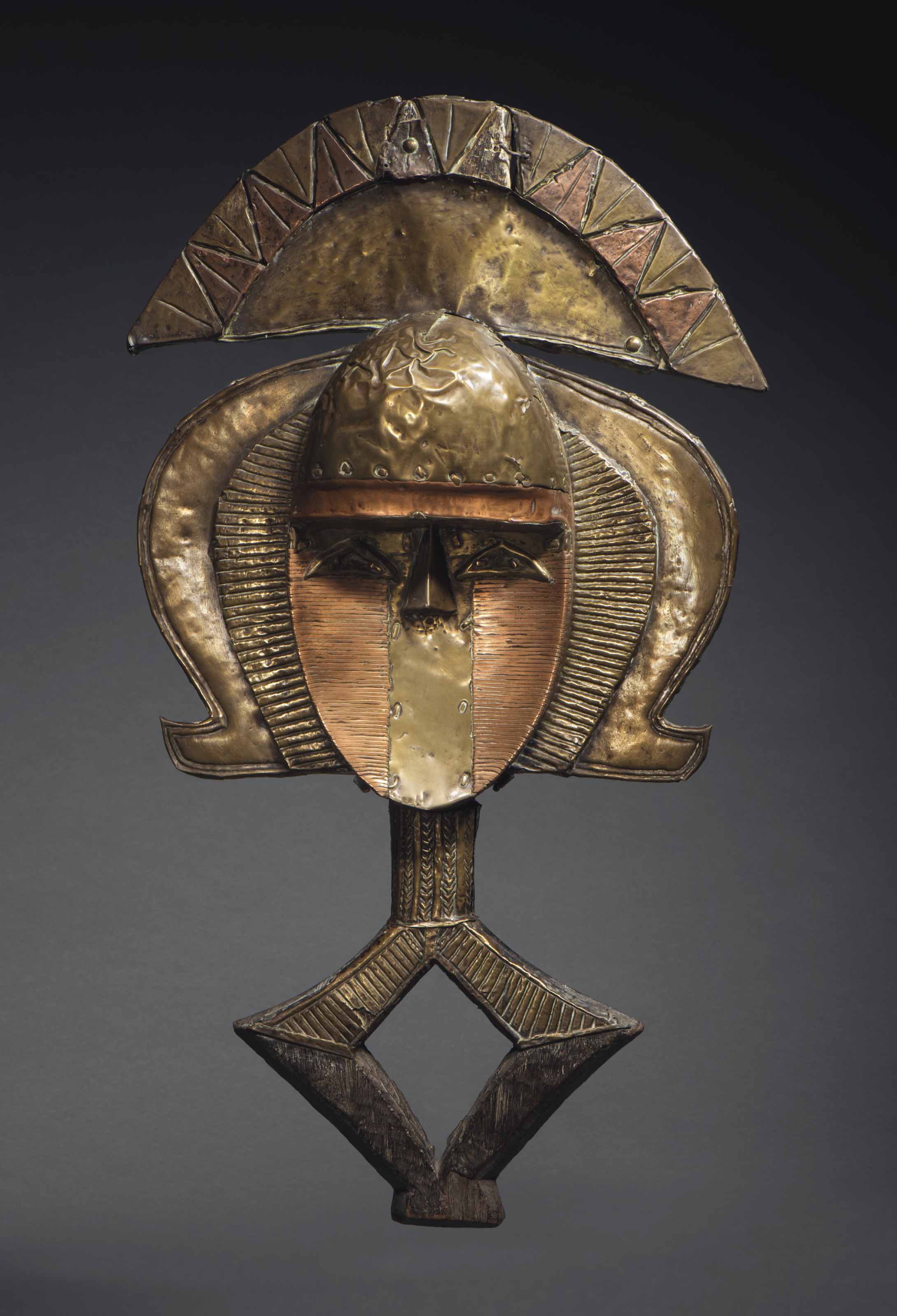 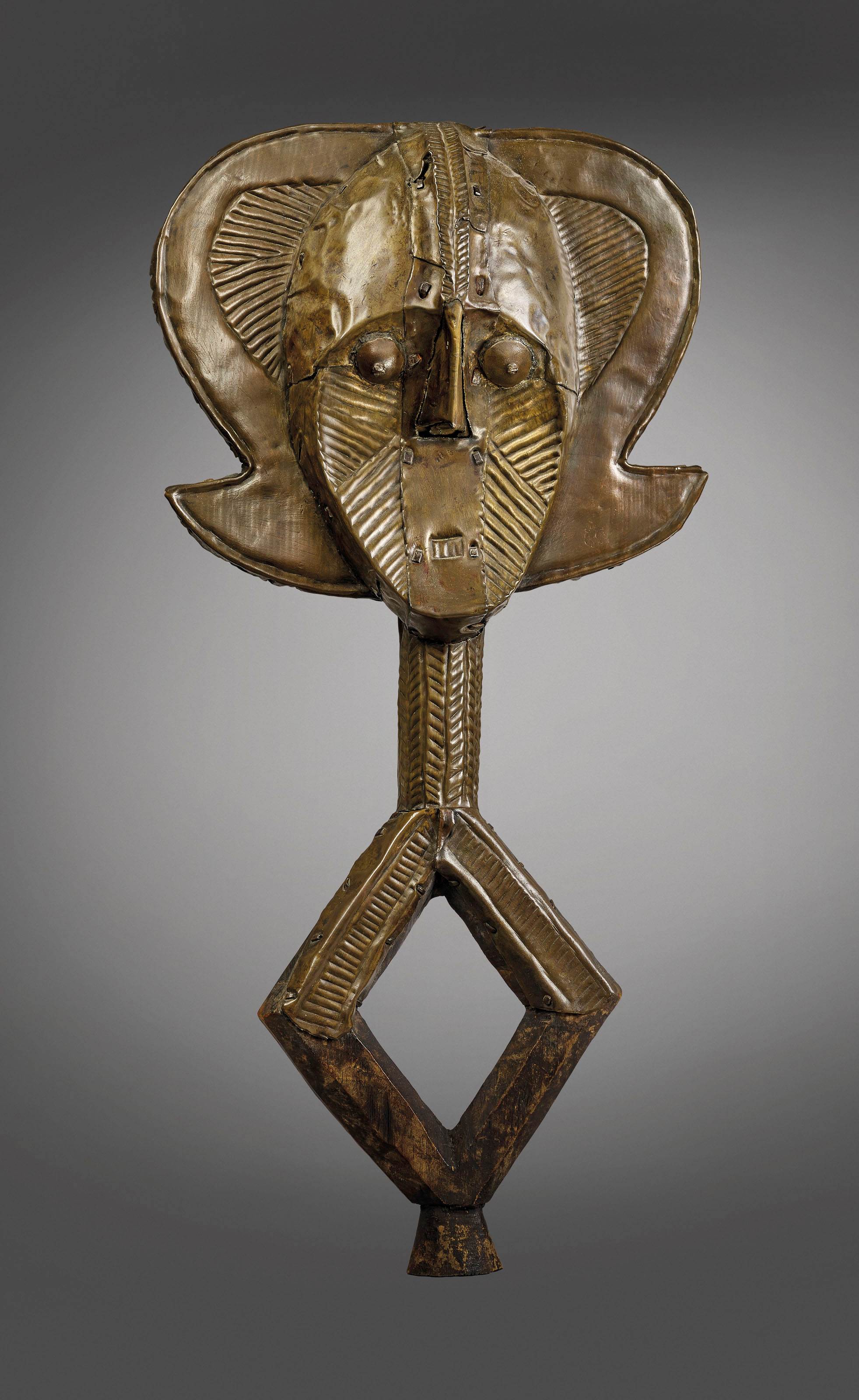 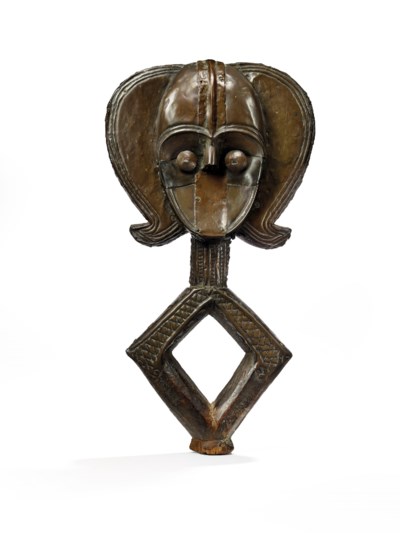 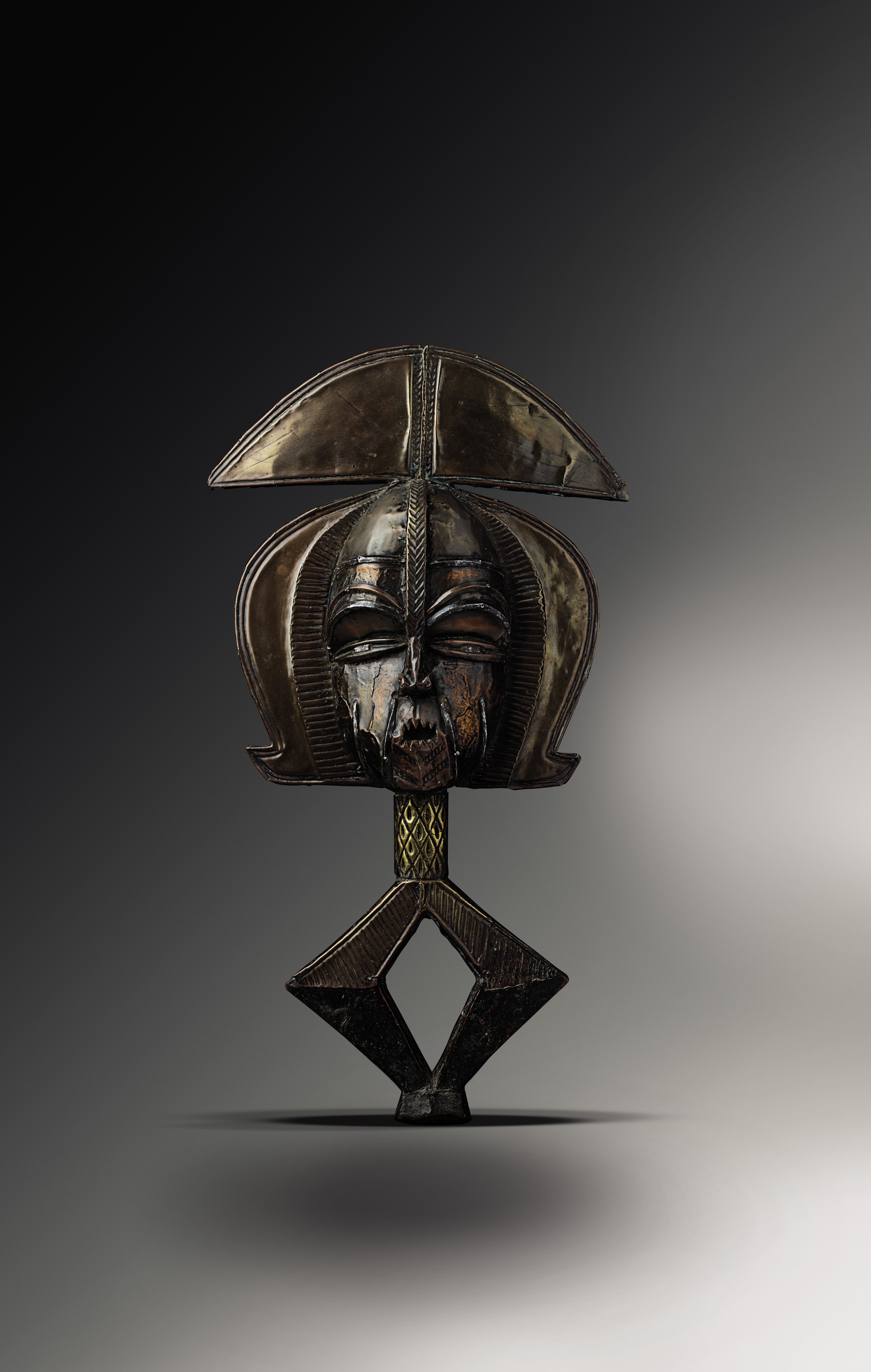 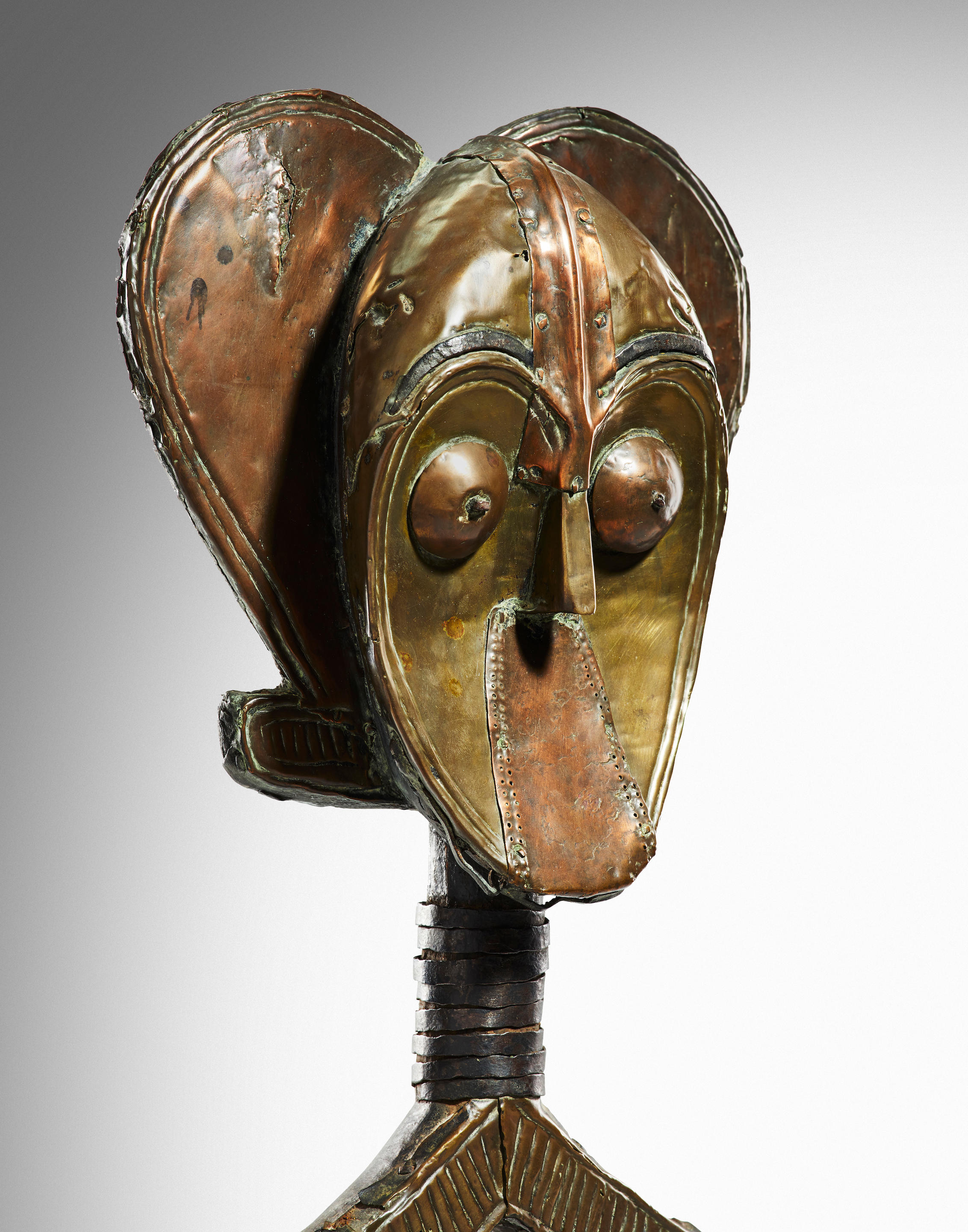 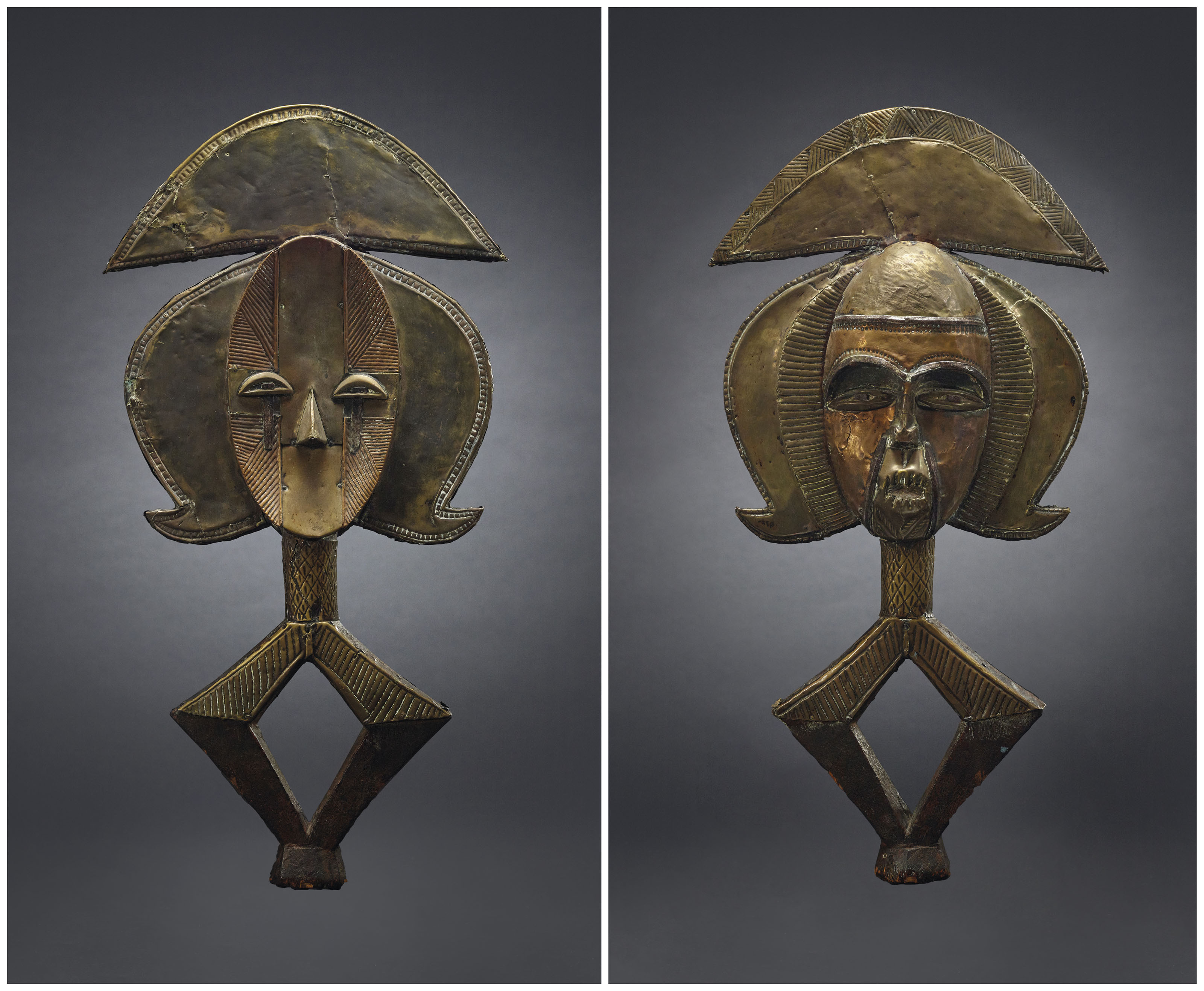