[KUNZ, George Frederick]. An archive of letters written between 1884 and 1920 to George Frederick Kunz. Approximately 100 letters or notes, comprising: approximately 9 autograph notes signed on post cards, approximately 80 autograph letters signed, and approximately 21 typed letters signed George Frederick Kunz developed an interest in minerals from a very young age. He amassed a collection of over four thousand specimens by the time he was in his teens, which he sold to the University of Minnesota for $400. He was self-educated in the field of mineralogy, and took a job with Tiffany & Co., where he was promoted to vice president at the age of 23. He was responsible for the U. S. mining and mineralogical exhibits for the international exhibitions in Paris (1889), Chicago (1893), Atlanta (1895), Paris (1900), and St. Louis (1904). He was a member of the Mineralogical Society of America, the American Association for the Advancement of Science, New York Academy of Sciences (serving for a time as vice president), the New York Mineralogical Club, the American Scenic and Historic Preservation Society (serving as president), the American Chemical Society, the American Institute of Mining and Metallurgical Engineers (serving for a time as vice president). He was a special agent for the U. S. Geological Society, and was a curator at the Museum of Natural History in New York City. He identified a new gem variety of the mineral spodumene, which was named "Kunzite" in his honor. A FASCINATING ARCHIVE OF CORRESPONDENCE TO NOTED AMERICAN MINERALIOGIST AND MINERAL COLLECTOR GEORGE FREDERICK KUNZ The archive includes correspondence from Stanley Field, Samuel Wesley Stratton (president of the Massachusetts Institute of Technology), H. L. Fairchild (secretary of the Geological Society of America), Alexander H. Phillips (Treasurer of the Mineralogical Society of America), R. W. Raymond (Acting Manager at Cooper Union), James R. Withrow (professor of chemical engineering at The Ohio State University), Thomas L. Watson (state geologist for Virginia), and numerous others. Estimate $400-600 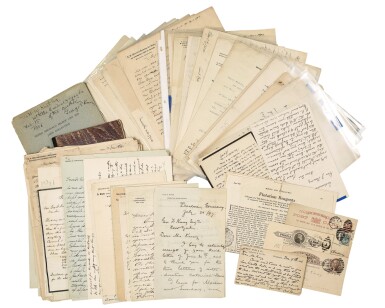 [KUNZ, GEORGE FREDERICK] | An archive of KUNZ, GEORGE FREDERICK The Book of the P