LACTANTIUS, Lucius Coelius Firmianus (c.240-c.320). Opera . Subiaco, Benedictine monastery of St. Scholastica: [Conradus Sweynheym and Arnoldus Pannartz], 29 October 1465. Median 2° (334 x 230mm). Collation: [1 10 2 2 ; 3-7 10 8 12 9-15 10 16 12 17-19 10 ] (1/1r table of rubrics. 1/10 blank, 2/1 Lactantius's errata discovered by Antonius Raudensis, 3/1 De divinis institutionibus , 17/1 De ira dei , De opificio dei , 19/9-10 blank). 184 leaves (of 186, lacking the 2-leaf errata [see below]); inserted after the table of rubrics is an additional single blank leaf watermarked with a bull's head, not identical to any in Piccard. 36 lines. Type: 120SG; 120Greek, some spaces left for Greek. 6-line initial in interlocking red and blue opening each work and book, 2-line initials alternating in red or blue, rubrics table with alternating red or blue paragraph marks and yellow capital strokes, MS headings added in red, marginal rubricator's instructions for the headings preserved to fo. 9/2, contemporary MS catchwords at the end of each quire and signatures. (Small marginal tear in first leaf, very occasional wormholes, occasional faint spotting.) CONTEMPORARY BLINDTOOLED RED-BROWN GOATSKIN OVER UNBEVELLED WOODEN BOARDS, PERHAPS BOUND AT SUBIACO, covers with multiple fillets surrounding a border of rhomboids formed by double fillets, the field chequered by double fillets, all compartments filled with a repetition of a single flower-head tool, two original alum tawed leather straps fastening at centre of upper cover with pin catch, chased brass strap-end and catchplate, tawed leather head- and tailbands (skilfully rebacked in calf, minor restorations, endpapers replaced), modern black polished calf box. Provenance : a few marginal annotations in a contemporary hand -- 'la veille st bartholemy fut ung grand paris (?) [16th-century note on 11/3v] -- Madame R. Salem, Paris -- private collector (sale Christie's, 20 June 1990, lot 63). FIRST EDITION OF THE FIRST DATED BOOK PRINTED IN ITALY, AND ONE OF ONLY FOUR BOOKS PRINTED BY SWEYNHEYM AND PANNARTZ AT THEIR FIRST PRESS AT SUBIACO. Conrad Sweynheym and Arnold Pannartz, clerics from the archdioceses of Mainz and Cologne respectively, established a press in about 1464 at the Benedictine monastery of St. Scholastica at Subiaco, which has long been considered the birthplace of printing in Italy. Although that honour is now given to a town in the Romagna, where an itinerant German printer operated about 1462/63, whose sole surviving imprint is a fragment of illustrated Passion prayers (sold Christie's, 23 November 1998, lot 18), it does not detract from the essential importance of the Subiaco press. The monks, under the supervision of Sweynheym, who had probably learned his craft in the printing shop of Fust and Schoeffer at Mainz, and Pannartz, issued only four editions: a grammar by Donatus, no copy of which survives; Cicero's De oratore ; the present edition of the works of Lactantius, dated 29 October 1465; and the works of St. Augustine, dated 12 June 1467, by which time Sweynheym and Pannartz had already established their second press, at Rome. THE SUBIACO LACTANTIUS CONTAINS THE FIRST GREEK FOUNT. It was apparently cast in the course of printing the edition, for it does not appear in the earliest printed quires, where the Greek passages are left blank. This is the only appearance of this Greek type; Sweyheym and Pannartz cast a second Greek fount for their books printed at Rome. Also in 1465 Peter Schoeffer at Mainz printed a few words of Greek using a crude, partial fount, in an edition of Cicero's Paradoxa . This copy not only has contemporary decoration, but it retains in the margins the original instructions to the rubricator for the chapter headings up to folio 9/2. The headings were written in pale brown ink and the rubricator subsequently copied them verbatim in red ink, on three occasions writing over part of the original instruction. The decoration is Germanic in style. At the 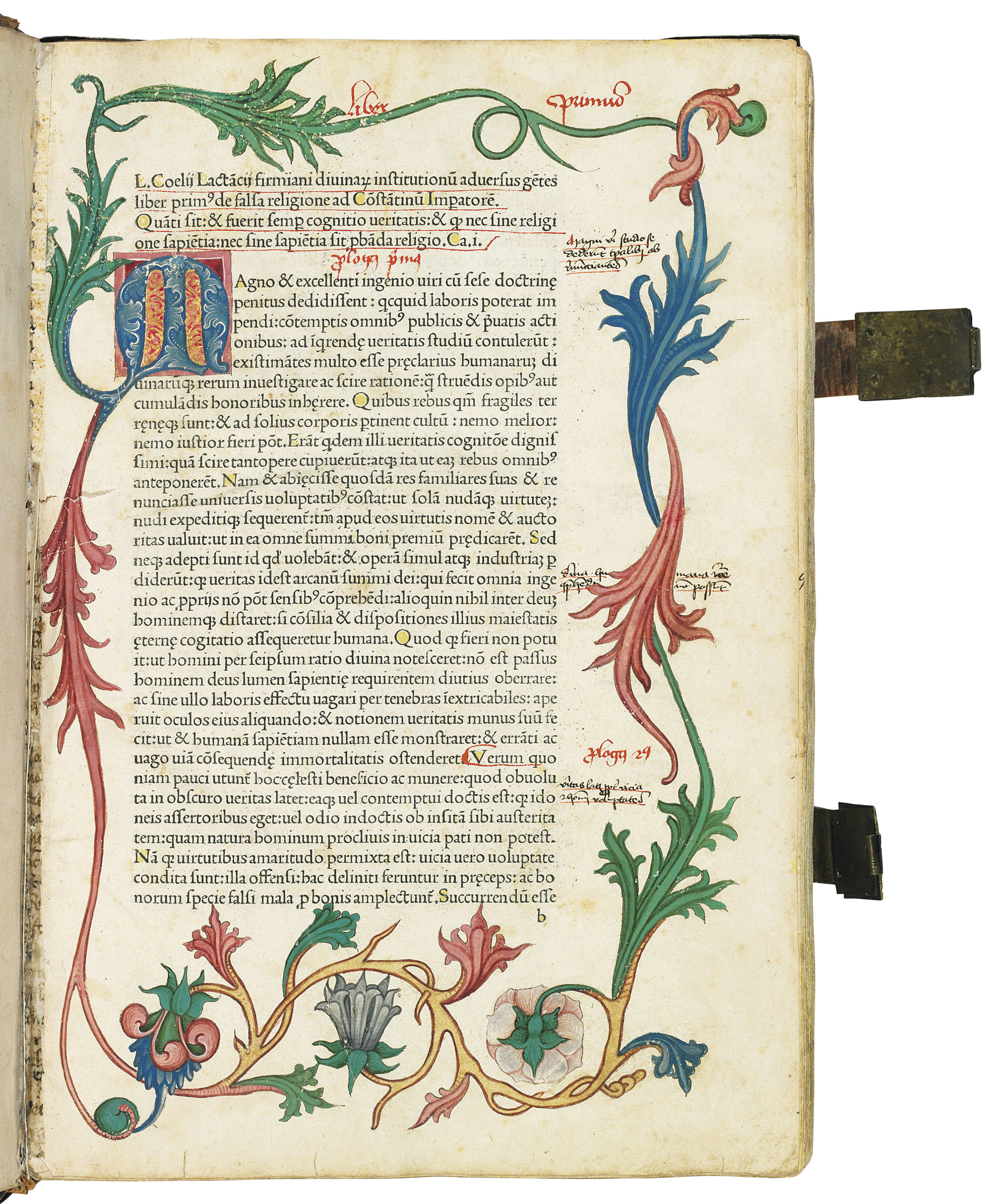