Large Collection of Letters by the Rebbe Rayatz, with Signatures and Handwritten Additions – 1944-1950 – Including Hitherto Unprinted Letters / Four Photographs

Large collection of letters by the Rebbe the Rayatz of Lubavitch, bearing his signatures and some additions handwritten by him, most sent to Mr. Elchanan Glazer. Brooklyn, New york, 1944-1950. 35 letters, typewritten on the official stationery of the Rebbe the Rayatz, bearing his own signature. Most are in Yiddish, some in Hebrew and in English. Some of the letters have not been printed. Some bear the Rebbe's full signature, including his last name and several are signed with the letter Yud in Ashurit script, the special signature he used in the last year of his life. The collection also contains two letters written in the name of the Rebbe the Rayatz on his stationery, signed by his secretary and a telegram sent on behalf of the Rebbe to his Chassidim in honor of Yom HaGeula. Enclosed: · 5 envelopes with postage stamps sent with some of the letters in the collection, with the official letterhead of the Rebbe the Rayatz. · 4 photographs. Three are photos of the Rebbe and the fourth is a photo of a Chabad event (the Rebbe is not seen in the photo). Items in the collection: · Letter of good wishes for a wedding, with blessings for the New Year, with the Rebbe's full signature (including his last name). · 4 letters of New Year wishes, one with two words in the Rebbe's handwriting. · 6 letters of blessings related to medical issues, pregnancy and birth. A few words in the Rebbe's handwriting were added to four letters. Three were written in the last year of his life, with the letter Yud of his name Yitzchak in Ashurit script. · 20 letters on various matters, some regarding assistance to refugees, another about reprinting the responsa of the Tzemach Tzedek, etc. One bears his full signature (including his last name). Most were not printed. Leaves with translations from Yiddish to English are attached to three of the letters. · Two letters in the name of the Rebbe, signed by his secretary, R. Chaim Liberman. · Letter in English, with his full signature (including his last name). · Letter to R. Chanoch Hendel [Havlin] with a request to sell the property owned by the Rebbe the Rayatz in the city of Hebron, and with the proceeds to buy a new building in Jerusalem or Tel Aviv. 1944. Unprinted. · Long letter, 2 pages, in Yiddish, to the Committee for Taharat HaMishpacha in Montevideo, capital city of Uruguay, regarding the construction of a mikveh. 1946. Unprinted. · Four large photographs, taken on his first visit to the US in 1930. One photo was taken during his visit to the White House and the others were taken on the deck of the ship on his return trip from the US. Another photo is from a Chabad event (without the Rebbe). R. Yosef Yitzchak Schneerson of Lubavitch-Chabad (1880-1950) was appointed Rebbe in 1920. In the lifetime of his father, the Rashab, he began his leadership role as his father's close assistant (at the age of 15, he accompanied his father to rabbinic conventions in Russia and in Europe). After his father's death, he served as Rebbe and led Chabad Chassidim who devotedly engaged in Torah activities under the Communist rule. His efforts to maintain Jewish life in Communist Russia landed him in prison several times. His last imprisonment was in 1927 and he was sentenced to death. Due to international pressure, he was released on the 12th of Tamuz (hence, this date is celebrated by Chabad Chassidism as Chag HaGe'ula). After his release, from 1928-1933, he lived in Riga, the capital city of Latvia, and from 1933-1940 in Poland, getting trapped in Warsaw at the outbreak of WWII. Chabad Chassidim in the US feverishly attempted to rescue him from Poland. After involving senior American officials and with the assistance of the head of Intelligence of the German Army, the Rayatz and his family were smuggled from Poland to the US (in Adar Bet 1940). A short while after he immigrated to the US, he purchased the 770 building in Crown Heights, Brooklyn, NY, which became his residence in his later years and headquart

Large Collection of Letters of Responsa

Large Collection of Letters by Rabbis an 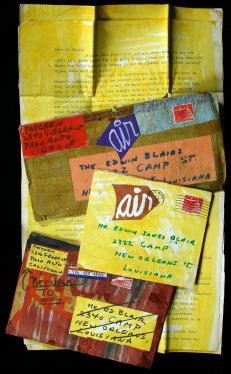 Large Collection of Letters and Rabbinic

Large collection of letters addressed to

Large collection of letters and clipped

Large collection of letters from artists

Collection of Letters and Manuscripts –