Leaf from a Glossed Bible from the medieval library of Cambron Abbey, in Latin, decorated manuscript on parchment[northern France (doubtless Paris), mid-thirteenth century]

Leaf from a Glossed Bible from the medieval library of Cambron Abbey, in Latin, decorated manuscript on parchment [northern France (doubtless Paris), mid-thirteenth century] Single large leaf, with main column of 23 lines in angular early gothic bookhand (with Iob 31:7-23, written space including integral gloss: 195 by 140mm.), integral glosses set in smaller script in columns on either side, other glosses added by the main glossing hand interlineally, then near-contemporary additions of further such material in outer margins of page, paragraph marks in red or blue, initials in same with contrasting penwork, running titles (here L / IOB in alternate red and blue capitals at head of each page), some stains and darkening in places, splits and torn edges (but prick marks still visible at outer edge) from reuse as a later book binding, but overall fair and presentable, 350 by 233mm. This leaf may be all that remains of a large and proud Glossed Bible codex, produced in Paris in the mid-thirteenth century, but then in the library of the great Belgian Cistercian monastery of Cambron in Hainault (founded from Clairvaux in 1148, suppressed in the late eighteenth century). Their distinctive late medieval ownership inscription De camberone at foot of verso. The practice of inscribing a monasterys name on a number of randomly selected internal pages began at Cîteaux itself and became characteristically Cistercian, but no other house practised it as compulsively as Cambron (cf. British Library, Egerton MSS. 628, 630 and 647, and the Bible in Sothebys, 8 December 2009, lot 49, among others). The parent volume is almost certainly the Iob glossatus, bis listed in their late medieval library catalogue as part of a large gift by Magister Godfredus (A. Sanderus, Bibliotheca Belgica Manuscripta, 1641, I, p. 355). It appears to have still been on the shelf there in 1792, and appears in an inventory of that date as Liber iob actus apostolorum / Canonicae apocalysipsis glossati (R. Plancke, Les catalogues de manuscrits de l'ancienne abbaye de Cambron, 1938, p. 59, no. 192). The abbey may have started to take leaves from their own manuscripts in the sixteenth century and beyond, leaving the bulk of the codex on the shelf. The library there was dispersed in the early nineteenth century, with 34 of its manuscripts passing to Sir Thomas Phillipps (Munby, Phillipps Studies, III, 1954, pp. 22-3; and including the next volume on the shelf in the 1792 inventory, a Glossed Epistles of St. Paul, now Brussels, Bibl. Royale II 2537). The present leaf, in situ on the binding of a later book, must have passed out of the monastery then to J. de Billemont of Brussels: his calligraphic ex libris at foot of recto (and thus once on outside of later book).

Leaf from a Glossed Bible, in Latin, dec

Leaf from a Glossed Bible, in Latin, dec

COLLECTION OF LEAVES FROM MANUSCRIPTS, O

A GROUP OF LEAVES FROM ILLUMINATED OR DE

from Romanesque manuscripts, in Latin on

TWO HISTORIATED INITIALS ON LEAVES FROM

COLLECTION OF LEAVES FROM ITALIAN DECORA

Leaf from a Noted Breviary with a very l

Leaf from a large Lectionary, in Coptic 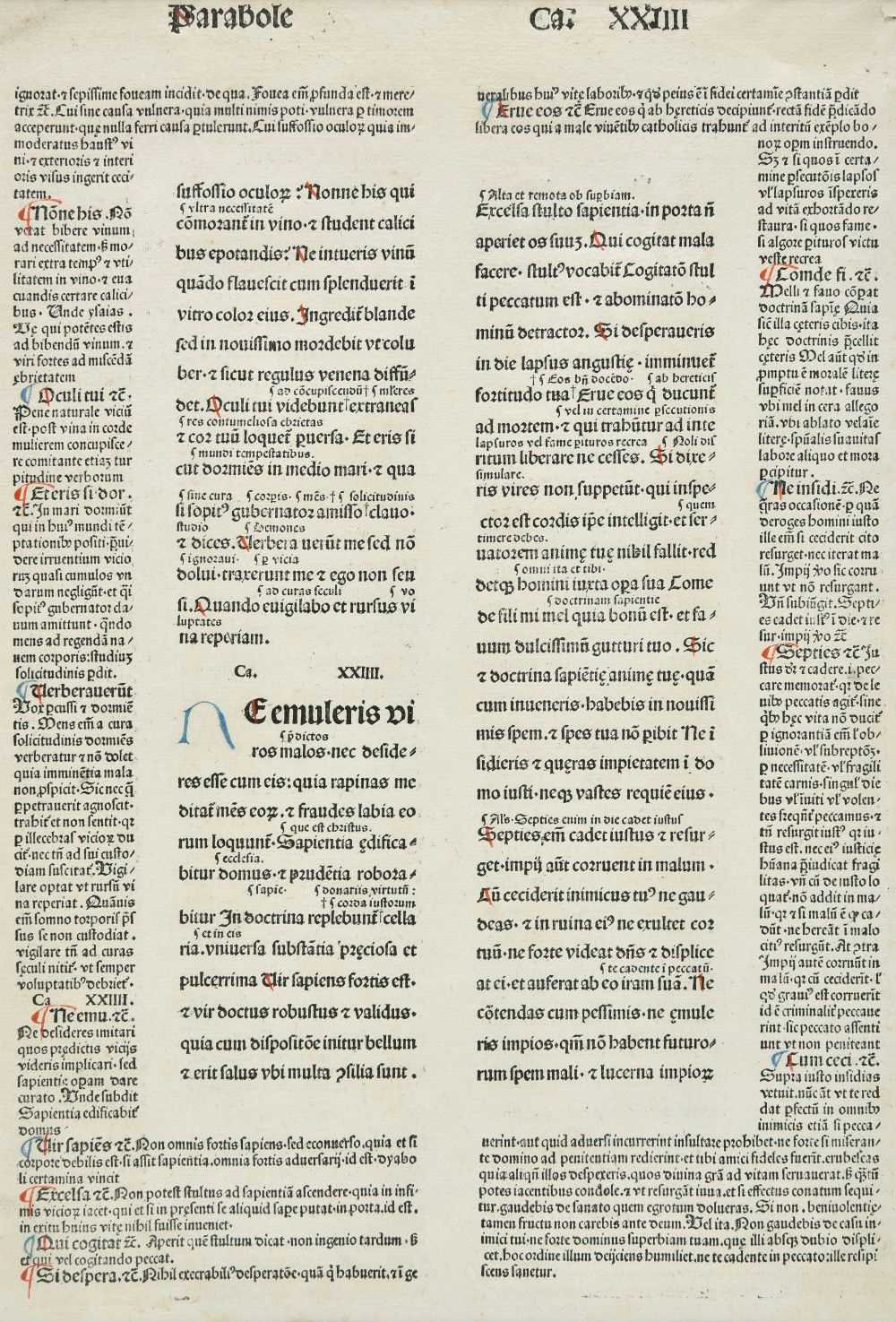 Fragment of two leaves from the Liber Gl

A COLLECTION OF BINDING FRAGMENTS, MANUS

COLLECTION OF LEAVES, FRAGMENTS AND CUTT

ADORATION OF THE MAGI, an initial 'E' cu