LEAR, Edward (1812-1888). A collection of illustrated limericks, caricatures and letters addressed to Mrs [George] Clive, comprising: Two autograph letters signed to Mrs Clive, Villa Emily, San Remo, 28 March 1875 and 19 March 1879, the first illustrated with a self-caricature walking with two sticks in the company of Foss the cat, the second with a sketch of two ladies dressed respectively in 'Japanisms [and] crinolines', together 6 pages, 8vo (occasional light soiling and a few small tears); Two autograph manuscript limericks, 'There was an old Person of Pisa' and 'There was an old man on some Rox [ sic ]', illustrated with sketches, on two leaves, approximately 132 x 194mm , laid down, together with three copies, not in autograph, of limericks from the Book of Nonsense ; Four autograph caricatures cut from letters, showing Lear riding a run-away elephant, with a signature (slightly trimmed), 31 May 1875, 89 x 132mm , Lear at a writing table being disturbed by birds at a window, with a fragment ('Ed') of a signature, May 1875, 74 x 62mm , 'Phos, ye cat', with a signature, 26 June 1875, 85 x 100mm , all laid down, and Lear as a bird, with 8 lines of text, 56 x 124mm , loose; contained in an album compiled by Mrs Clive and containing a variety of other riddles, jokes, poems and sketches. Provenance . Mrs Clive; and by descent. 'I am become like a periwinkle in the wilderness, with an owl for his dessert'. The first letter complains of the changes in San Remo since the Franco-Prussian War ('You may suppose how many Germen & Gerwomen there are, when I tell you that 37 have died here this winter alone!'), mentioning his falling income from the sale of his pictures, referring to his Indian tour (the country has 'so fascinated me that I hardly fancy I can make any other views for the rest of my life') and 'Lord Northbrook's great picture of Kinchinjunga', and concluding with mournful description of his 'semi-demoralized' condition: 'I am become like a periwinkle in the wilderness, with an owl for his dessert. It ain't pleasant at 63 ... I shall have recourse to the society of my Cat, & walk up & down the terrace' (illustrated with a depiction of this promenade). The second letter resumes the same vein: he is just finishing his picture of Kanchenjunga, and is sending his 'Dead Sea from Masada' for 'some Exhibition or other'. Of San Remo society he observes 'The most sensible women I know have gone frantically at either Japanisms or crinolines; & I have always thought the Q[ueen] has shown good sense in sticking to rational dress'. The Zulu War is 'a bore'. He remembers Julia Margaret Cameron [who died on 26 January 1879] as 'a singularly energetic & unselfish woman - unlike anybody I know. We however never got on well together - as her outrageous outward demonstrativeness & my sulky inward ways didn't agree'. The Clives were friends and patrons of Lear over a long period: Annsybella Clive was one of the sponsors of Lear's Indian expedition. George Clive was a barrister and politician, and Under-Secretary of State for the Home Department, 1859-62.

Lear [Edward] : A Collection of Works - 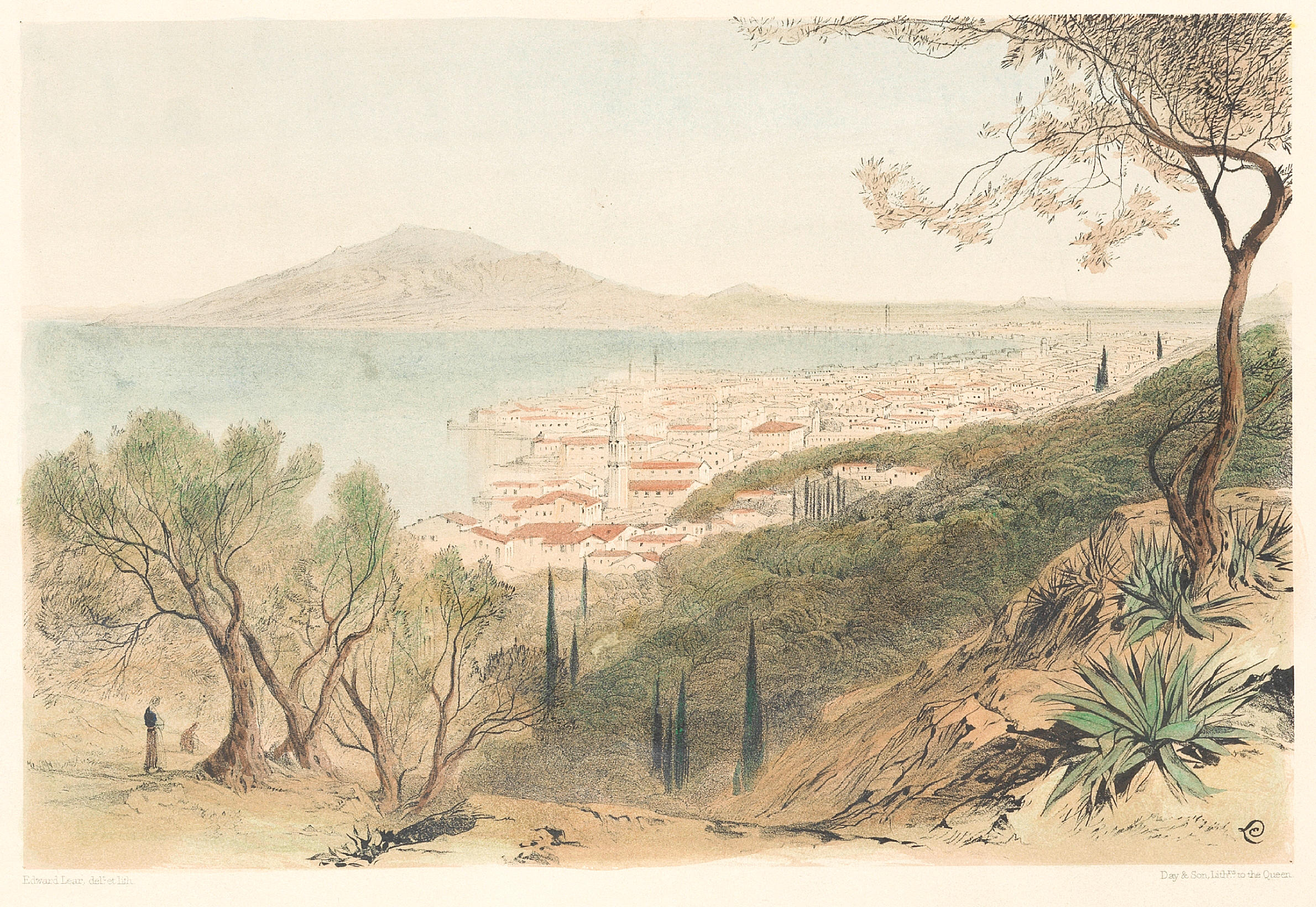