LINCOLN, Abraham, ASSASSINATION]. War Department, Washington, April 20, 1865. $100,000 Reward! The Murderer of our Late Beloved President, Abraham Lincoln, is still at large. $50,000 Reward will be paid...for his apprehension, in addition to any rewa...

LINCOLN, Abraham, ASSASSINATION]. War Department, Washington, April 20, 1865. $100,000 Reward! The Murderer of our Late Beloved President, Abraham Lincoln, is still at large. $50,000 Reward will be paid...for his apprehension, in addition to any reward offered by Municipal Authorities, or State Executives...Let the stain of innocent blood be removed from the land by the arrest and punishment of the murderers. All good citizens are exhorted to aid public justice on this occasion...[signed in type:] Edwin M. Stanton, Secretary of War. [Washington, D.C.], 20 April 1865. (Kunhardt & Kunhardt, Twenty Days , p.106; The Last Best Hope of Earth: Abraham Lincoln and the promise of America , ed. J. Rhodehamel and T. F. Schwartz, 1993, pp.68-69; S. Swanson and D. Weinberg, Lincoln's Assassins: Their Trial and Execution, an Illustrated History , 2001, p. 50, fig. 38). Folio (24 1/16 x 12 5/8 in.), three early albumen photos attached in small frames at the top (Surratt, Booth, Herold), light, even browning, slight wear along folds with a few small losses: part of two letters in line 3 ("War Department..." etc.), parts of two letters in line 6 ("Is Still at Large") and three letters in "another" in line 13; a few chips to left-hand margin mended, neatly backed with linen, but despite defects, an excellent copy, with larger margins than many surviving copies. "LET THE STAIN OF INNOCENT BLOOD BE REMOVED FROM THE LAND": THE WAR DEPARTMENT REWARD POSTER, WITH PHOTOGRAPHS OF THE CONSPIRATORS AND UNIQUE MANUSCRIPT ADDITIONS A especially interesting copy of what is in all liklihood the most famous reward poster in American history, bearing interesting and possibly unique handwritten additions to the physical descriptions of John Wilkes Booth and John Surratt. At the top is a bold pencilled note "Issued April 16th 1865"; in the lower margin is an ink inscription: "From Col. L.C. Baker, Adj...Dept. Post this in a conspicuous place within doors." Lafayette C. Baker (1826-1868), chief of the War Department's secret service (the War Department Detectives), was actively involved in the pursuit and capture of the Lincoln assassins and probably played a role in the gathering of information and the printing of the various War Department reward posters. By 16 April, when this poster was circulated by the War Department, only John Wilkes Booth, Herold and John Surratt had been identified as part of the assassination conspiracy. Herold escaped with Booth into Maryland, then Virginia, where, 10 days after this poster was disseminated, they were surrounded by a detachment of Union soldiers in a Virginia tobacco barn. When Booth refused to give himself up he was fatally shot. (Herold was tried, convicted and executed with other conspirators on 6 June 1865. Surratt escaped to Europe but was brought back for trial in 1867.) The historic broadside is known in two separate printings (the present corresponds to the second printing, first issue): First printing . Makes no provision for the affixing of photographic images; vertical dimension approximately 22 7/8 in. The description of Booth reads "and wears a heavy black mustache." The conspirator Herold is described as "a little, chunky man, quite a youth, and wears a very thin moustache." (A copy of this printing, from the Byron Reed Collection, was sold here on 8 October 1996, lot 209, $17,000.) Second printing, first issue : From an entirely new setting of type, it carries three small three-sided woodcut frames at the top, to allow photographs of the conspirators to be added to the poster; the maximum vertical dimension is roughly 24 3/16 in. The description of Booth is the same as in the first printing: "and wears a heavy, black moustache." But the description of "David C. Harold" ( sic ) is considerably more detailed than in the first printing, and here comprises three lines. A "Notice" regarding additional rewards is appended at the bottom. Second printing, second issue : Identical to the first print 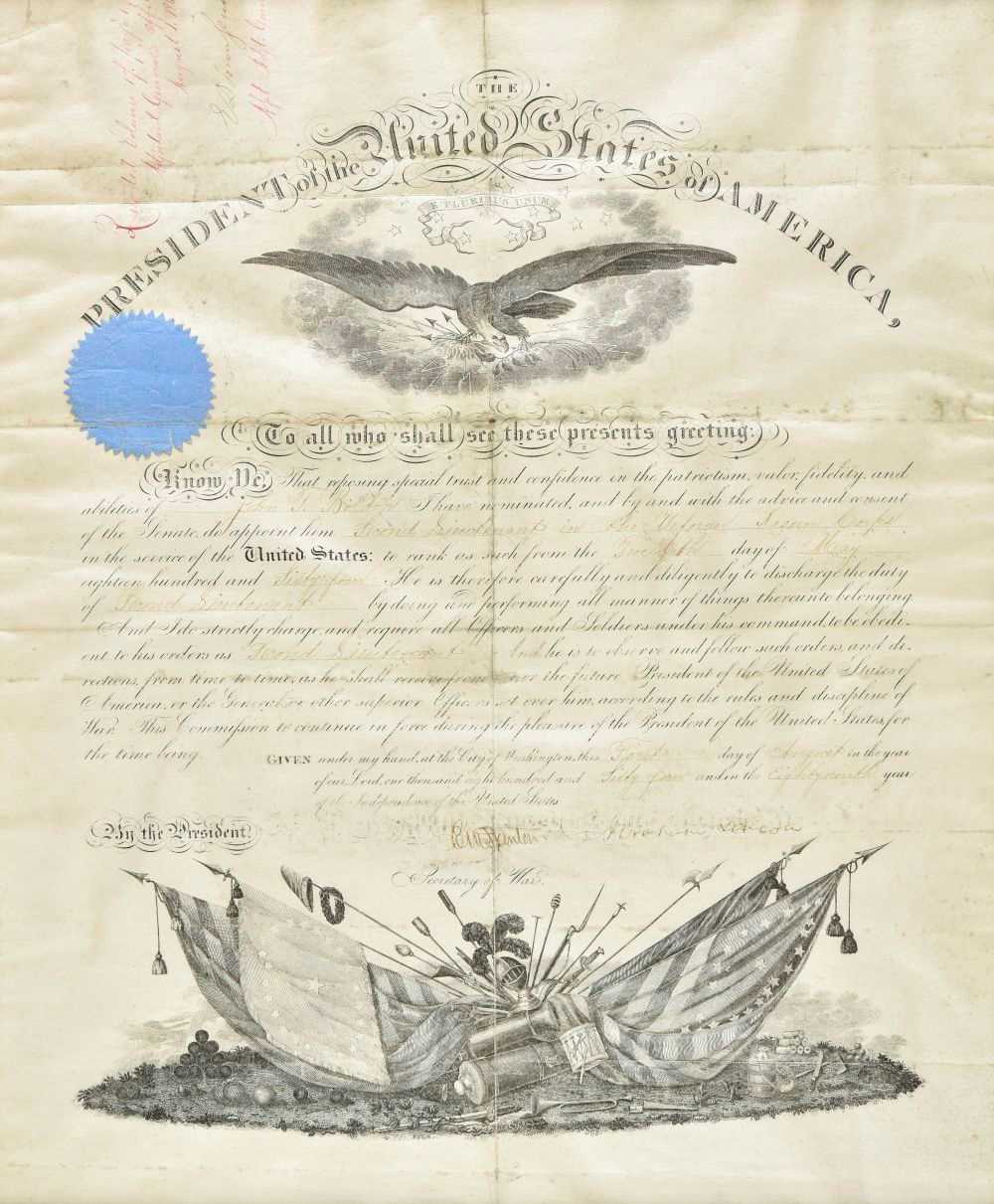 Lincoln (Abraham). The Assassination of