LINCOLN, Abraham. BRADY, Mathew B., phototographer . Jumbo ambrotype campaign badge with oval portrait of Abraham Lincoln, [on verso:] For President Hon. Abraham Lincoln Manufactured by Geo. Clark, Jr. & Co., Ambrotype Artists, No.59 Court St., Boston. [1860]. 2½ x 2 1/8 in., including original frame, oval ambrotype portrait on glass (1 7/16 x 1 7/8 in.), framed in broad decorative oval of stamped gilt metal, typographic printing on a terra-cotta card stock, back with large brass pin and clasp, slight abrasion to back affecting a few letters of Clarke's name, the image with light crackling of emulsion especially along bottom edge. LINCOLN AT THE TIME OF THE COOPER UNION ADDRESS: A RARE JUMBO AMBROTYPE CAMPAIGN BADGE The largest, rarest and, quite probably, most costly to produce of all early American political campaign badges. It was made in very limited quantities by a Boston shop during the key 1860 campaign, when the four-year old Republican party fielded an Illinois lawyer against three candidates of a Democratic party fatally divided over the issue of slavery. It was in the bitter 1860 campaign that photographic processes were first employed to create political badges. Introduced at this time was the ferrotype, a small tintype inexpensively produced on metal and cased. These were mass-produced in considerable quantities (see T. Hake, Hake's Guide to Presidential Campaign Collectibles , pp.88-89). But Clark's jumbo ambrotype is a political artifact of an altogether superior order. For one thing, the ambrotype process (by which a positive image is rendered by backing a photographic negative on glass with a dark material) was tricky and relatively expensive, precluding true mass-production. George Clark a little-known Boston ambrotypist, chose to produce an large image (nearly twice the size of the more common ferrotypes), in oval format, suggestive of a miniature portrait. The process was quite labor-intensive: after Lincoln's image was transferred to specially-shaped glass discs and the specially-printed backing card had been cut to the same proportions, the delicate ambrotype and the printed card had to be assembled within the gilt metal frame. At this point, the stickpin was soldered in place (some examples have a hole at top so they could be hung by a ribbon). The complexity of manufacture is a factor in the great rarity of Clark's jumbo ambrotype: fewer than 15 are likely to be extant, and a number exhibit serious flaking of the image. The image Clark reproduced is the famous Cooper Union portrait, the most famous of Lincoln's beardless poses, taken in New York city only hours before Lincoln was to deliver the Cooper Union address that brought him national prominence. "On Monday, February 27, escorted by several of the Young Republicans, he caught a glimpse of Broadway and had his photo, which he called his 'shaddow,' taken at Matthew B. Brady's studio...The portrait Brady produced after this sitting was a work of art; he retouched the negative in order to correct Lincoln's left eye that seemed to be roving upward and eliminated harsh lines from his face to show an almost handsome, statesmanlike image" (D. H. Donald, Lincoln , p.238). In Brady's portrait, Lincoln is wearing the $100 suit which he had specially ordered from a Springfield tailor to be worn for his highly publicized New York appearance. The memorable image was very widely disseminated in many different forms and was the image of Lincoln most familiar to the American electorate on the eve of the 1860 election. Afterwards, Lincoln is said to have referred to the image as the portrait that put him in the White House (see C. Hamilton and L. Ostendorf, Lincoln in Photographs, pp.34-37; for other 1860 uses of the Brady image, see Packaging Presidents: Memorabilia from Campaigns Past, exhibition, Hudson River Museum, 1984, pp.41,43-45). 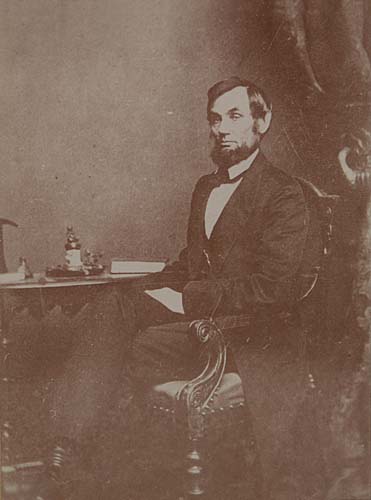 FROM THE SIDNEY STROBER SALE (LINCOLN, A 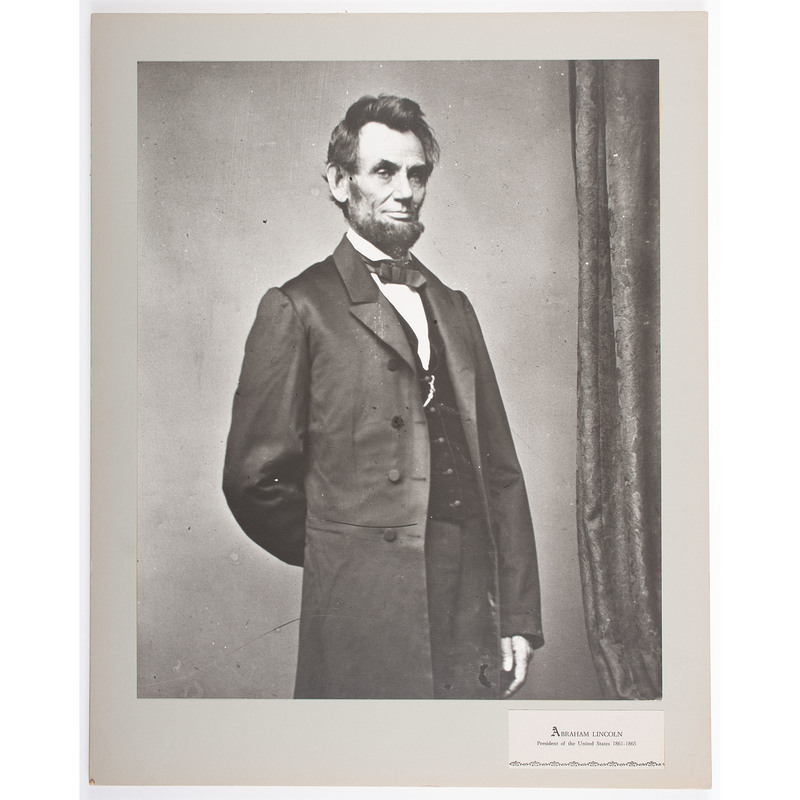 Abraham Lincoln Prints from the Brady/An 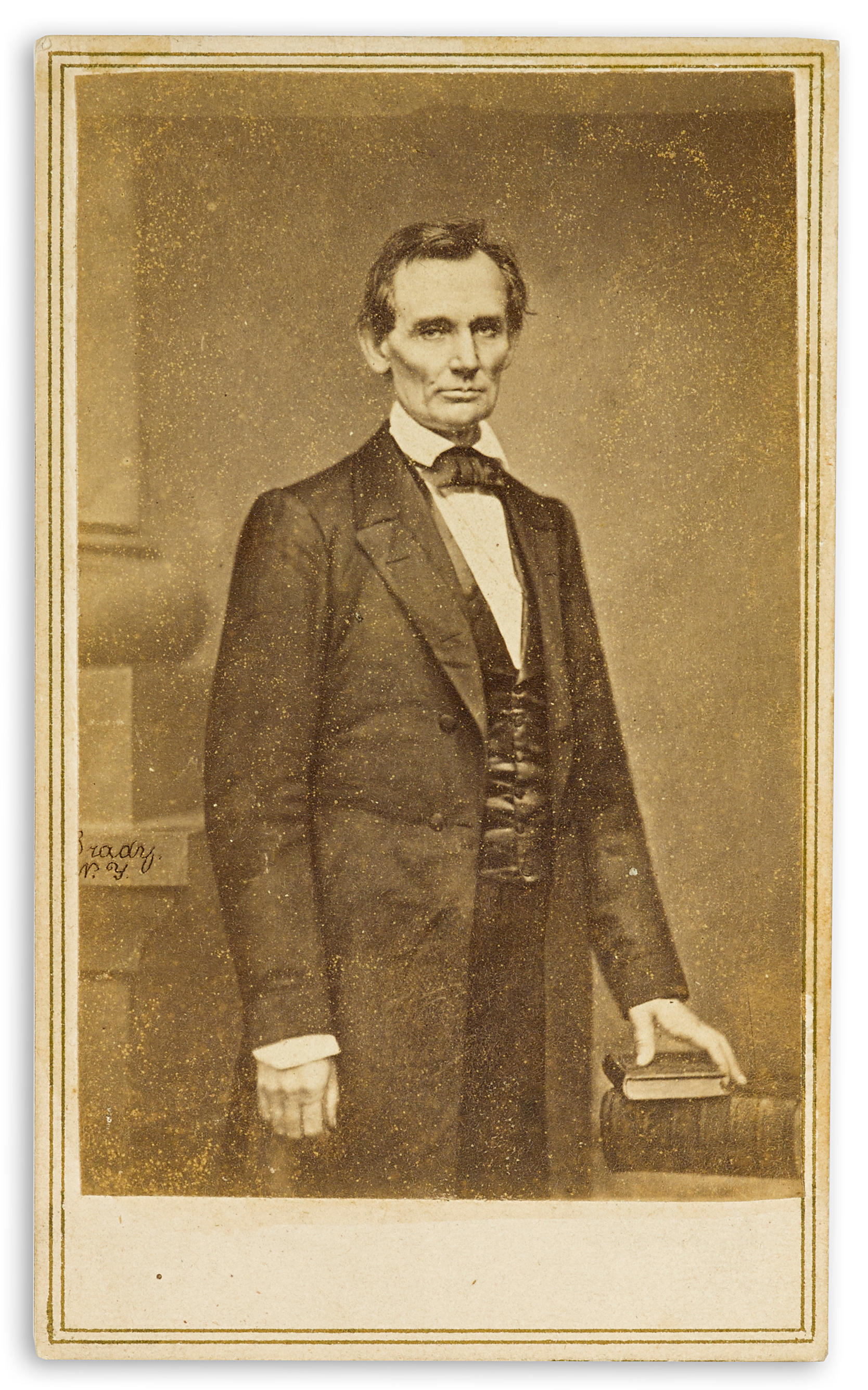 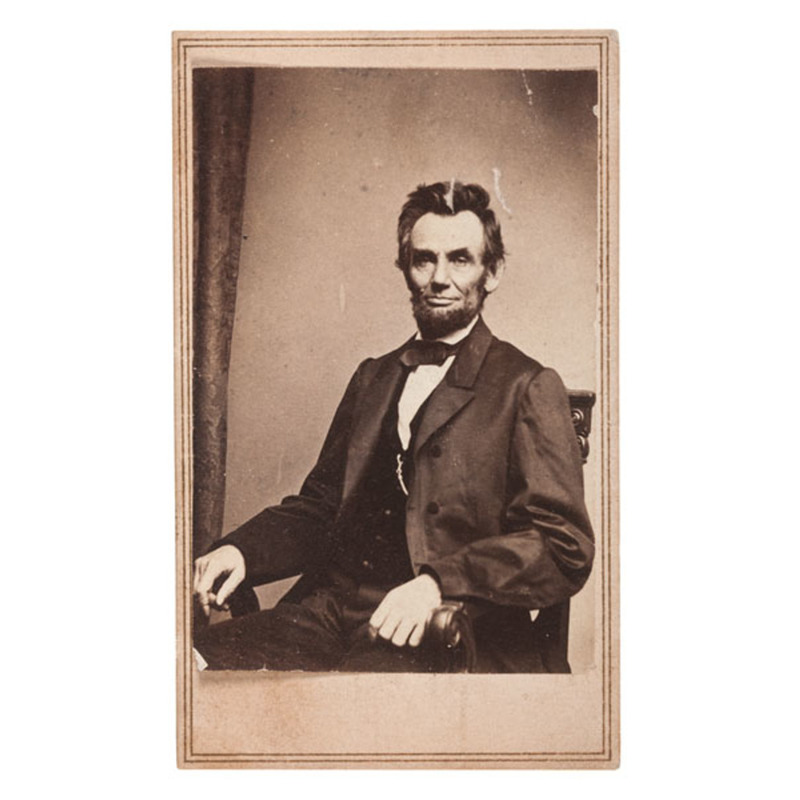 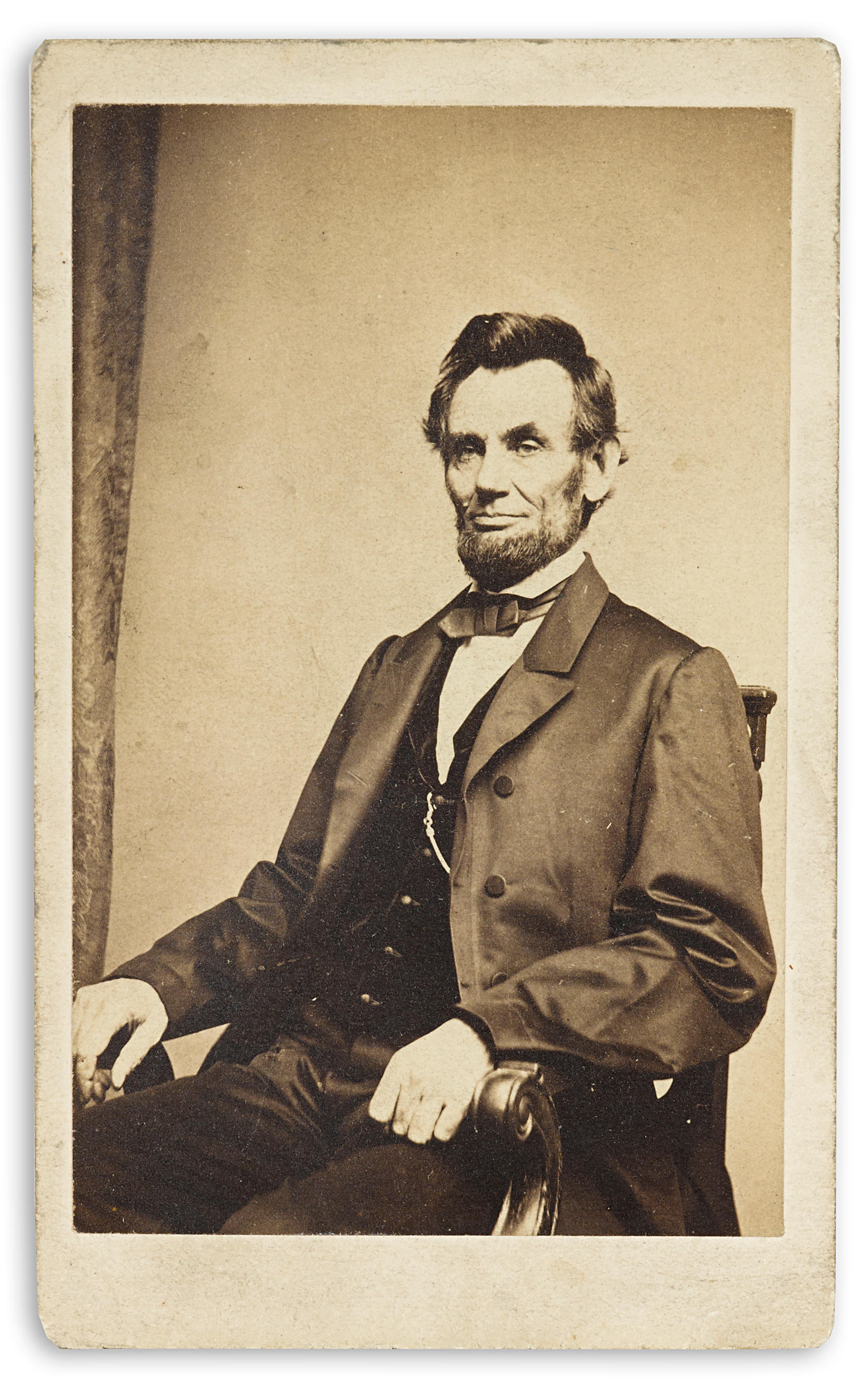 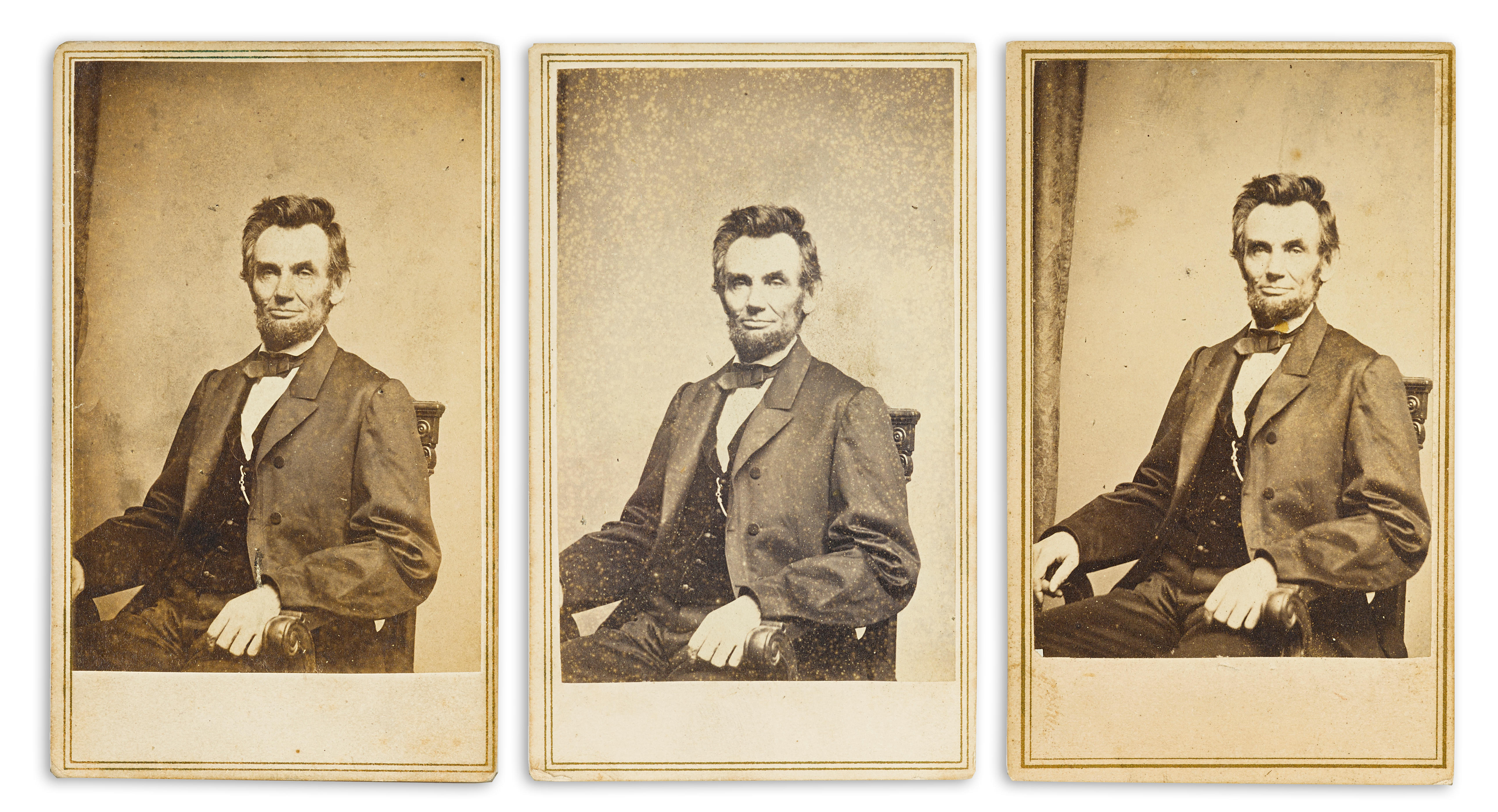 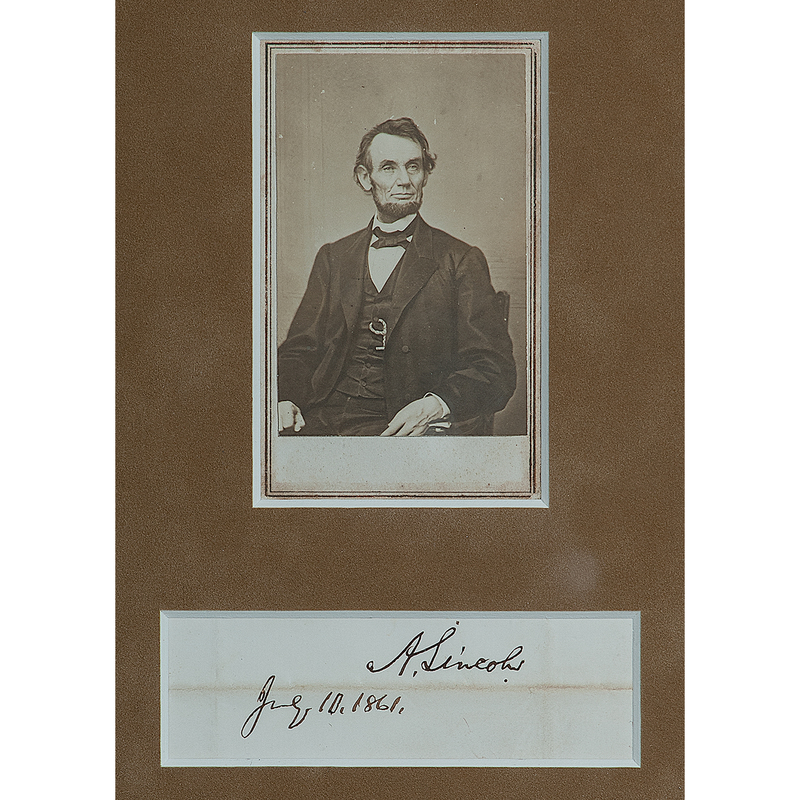 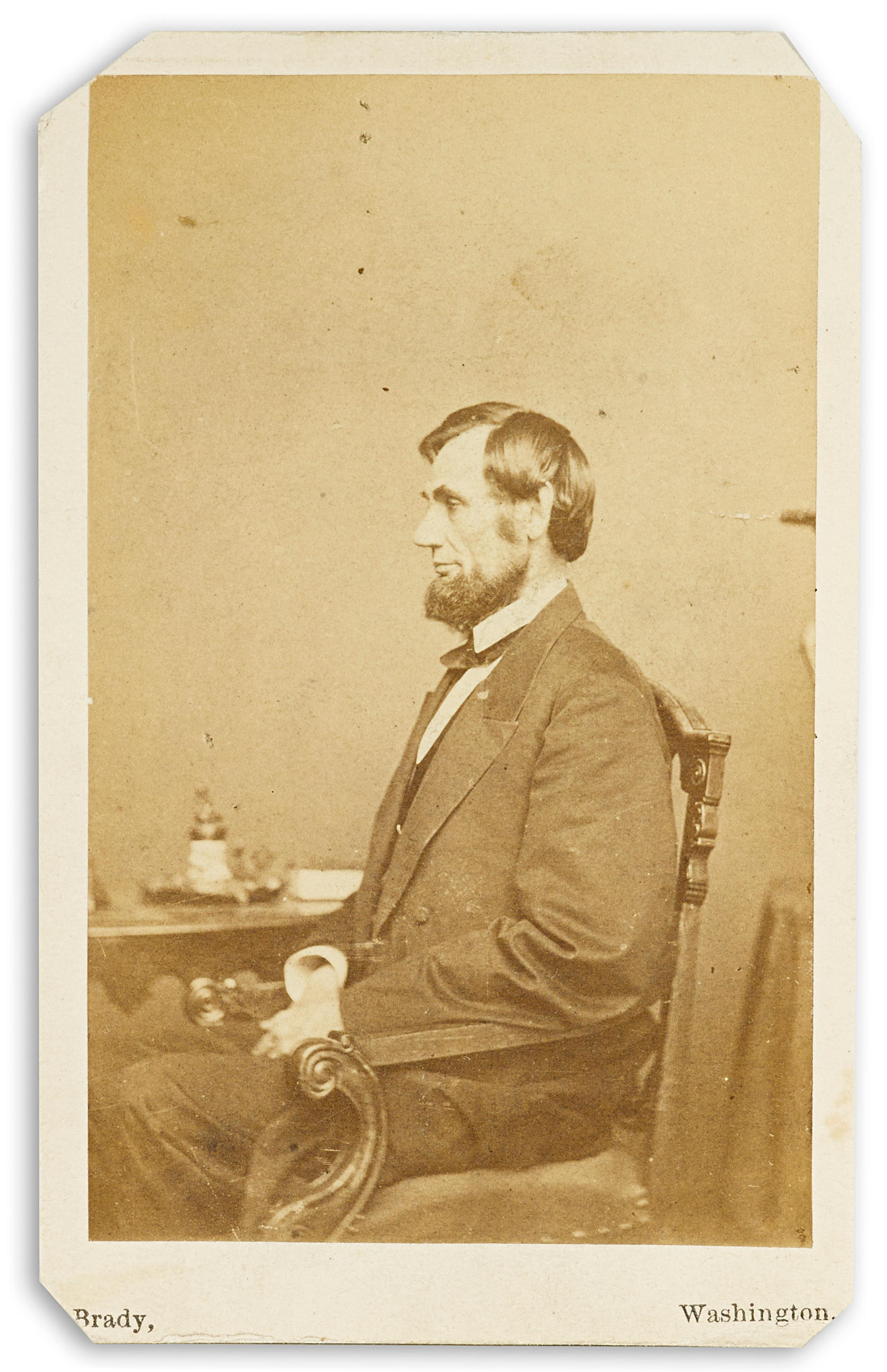 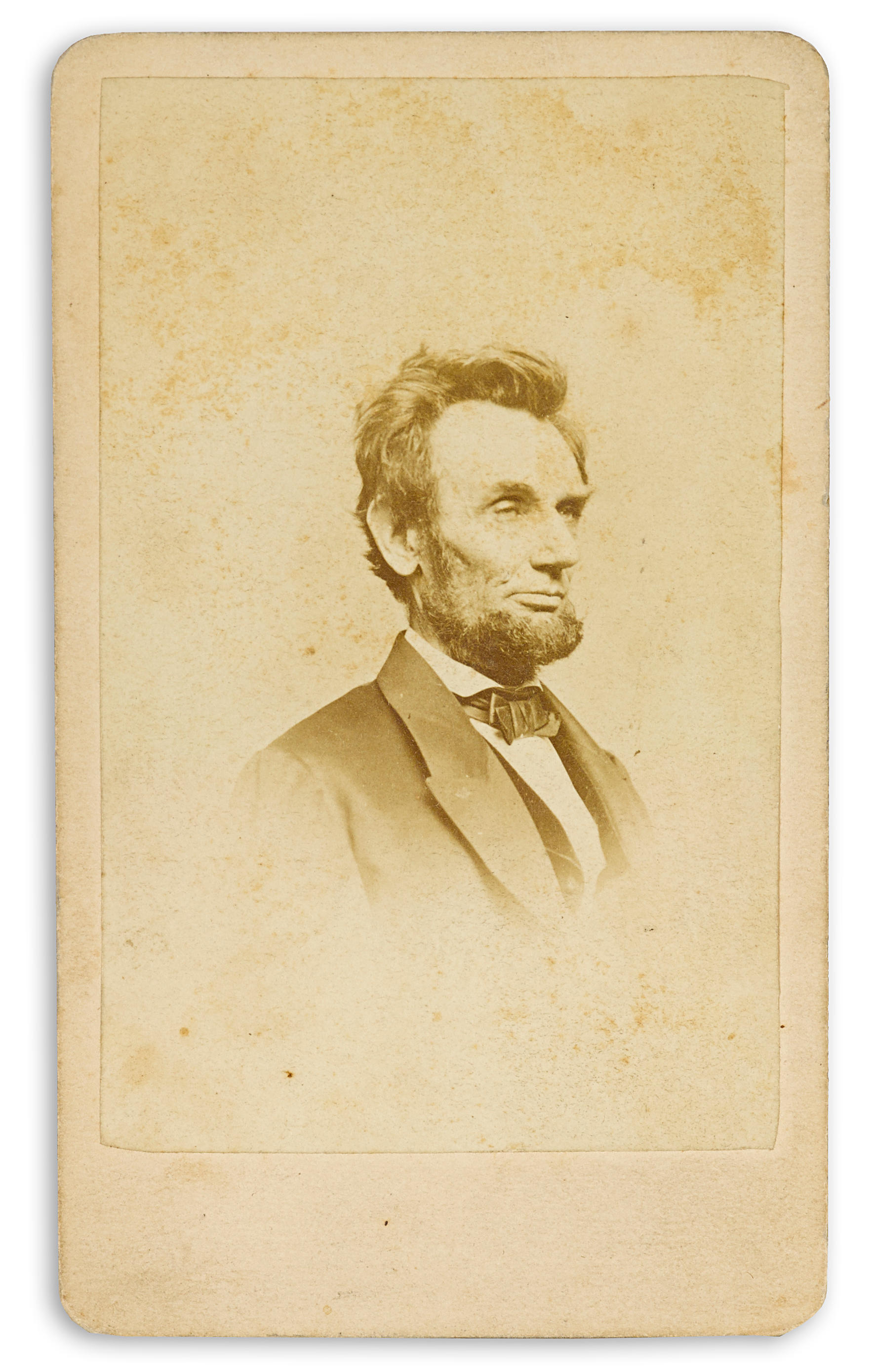 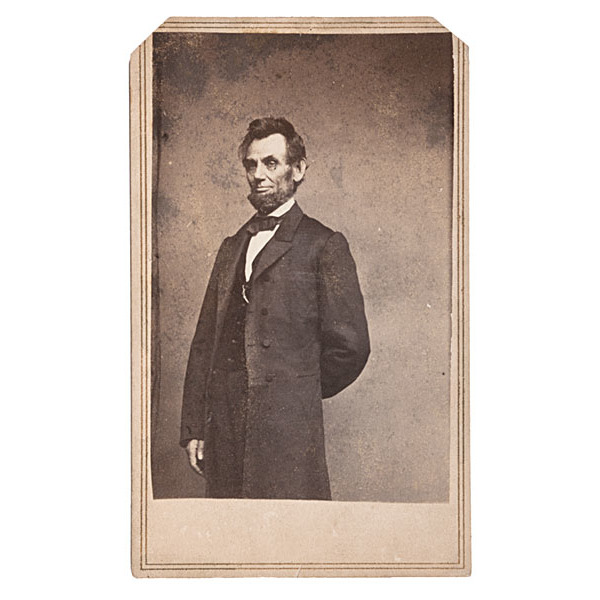 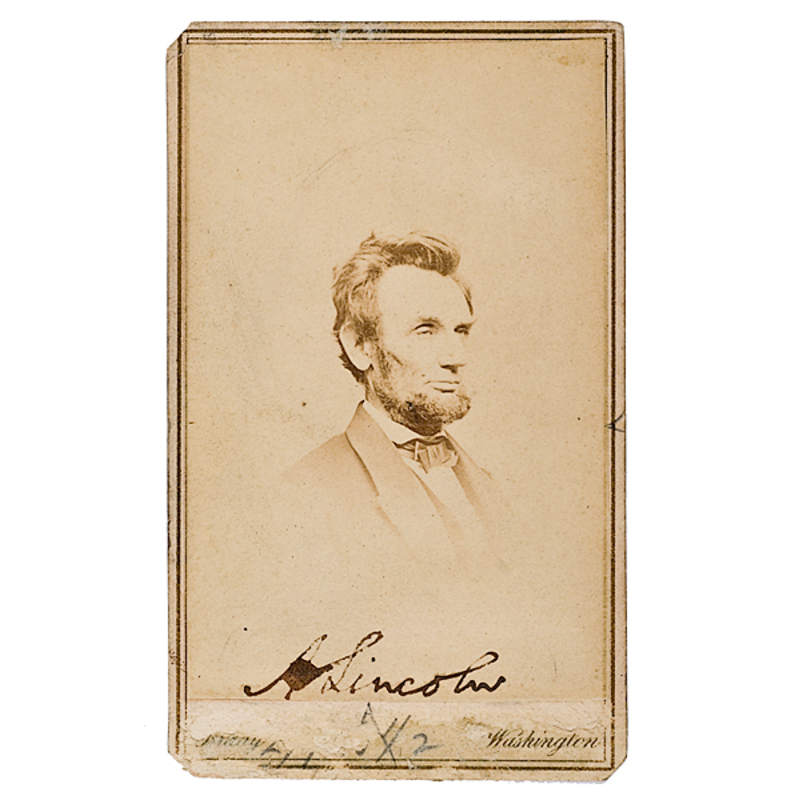