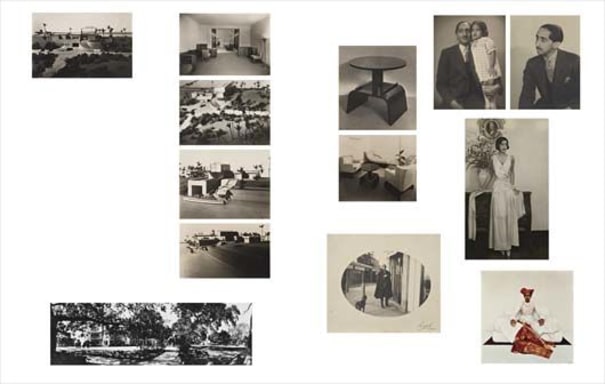 Man Ray, Eckart Muthesius J. Feneyrol and Emil Leitner Comprehensive collection of photographs documenting the Manik Bagh Palace of the Maharaja of Indore, and project for an Indian country residence on the shores of the Raj Pilia Tank, printed 1960s-1970s printed 1960s-1970s Twelve gelatin silver prints and one colour coupler print. Largest: 31.4 x 24.8 cm (12 3/8 x 9 3/4 in.) Comprising seven prints by Emil Leitner, three prints by Man Ray, one print by Eckart Muthesius and one print by J. Feneyrol (13).
Provenance Eckart Muthesius Literature Reto Niggl, Eckart Muthesius 1930: The Maharaja's Palace in Indore, Architecture and Interior, Stuttgart, 1996, pp. 28, 30-31, 38, 45-47, 57, 74 and 83 Catalogue Essay The Maharaja of Indore and his American wife hired Eckart Muthesius to design the Manik Bagh Palace, meaning ‘Garden of Rubies’, in 1930. Muthesius first met the Majaraja at Oxford and was only 24 when he was commissioned as architect of the palace. Constructed in the International Style, the building was composed of steel, stucco and glass. A truly modern creation, it featured the first air conditioning system in India. Muthesius was also responsible for the interior, incorporating his own furnishings, as well as those by the most prominent modern designers including Le Corbusier, Marcel Breuer and Hans Luckardt. He embraced a minimalistic aesthetic, and the ballroom, featuring a wooden floor and mirrored walls, was a favorite of the Maharaja due to his passion for jazz music. In fact, Man Ray spent an entire evening in Cannes with the Maharaja and his wife listening and dancing to jazz. Throughout the creation of his palace, the Maharaja adopted the Art Deco style and associated himself with prominent Western artists. In 1956, the year of his death, the palace was transformed into an office building and the interior furnishings were auctioned off in 1980. Read More