Title: Mr. VVilliam Shakespeares Comedies, Histories, and Tragedies. Published according to the true originall copies Author: Shakespeare, William Place: London Publisher: Printed by Tho. Cotes, for William Aspley and are to be sold at the signe of the Parrat in Pauls Church-yard Date: 1632 Description: [20], 303, [1], 46, 49-100, [2], 69-232, 168, 269-419, [1] pp. (A6, *4, A-2B6, 2C2, a-y6, 2a-3c6, 3d4). Title with engraved portrait by Martin Droeshout Double column text within typographical rules. Woodcut headpieces and initials. (folio) 32.5x21.3 cm (13¾x8½"), earlier 20th century full red morocco with triple gilt filet borders, spine elaborately tooled & lettered in gilt, raised bands, gilt inner dentelles, marbled endpapers, all edges gilt; bound by Riviere & Son; with custom-made red morocco two-part solander case by Bradstreet. A fine and handsome copy of the second folio edition of William Shakespeare’s Works, one of the great landmarks of English literature and a cornerstone of any rare book collection. The Second Folio both reprints (on a page-for-page basis) the 1623 “First Folio” – the first printing of Shakespeare’s collected plays – and it also additionally contains the first printed work of the great epic poet John Milton (“An Epitaph on the admirable Dramaticke Poet, W. Shakespeare”). As copies of the 1623 First Folio are of very great rarity and cost in private hands, the Second Folio is essentially the earliest obtainable printing of Shakespeare’s plays. Gregg notes that, “Though many errors were introduced in the course of reprinting, the text of the present edition shows signs of careful, if unauthorized, revision.” The present is a complete copy of the first issue of the Second Folio in the rare Aspley imprint. There are five variant title-page imprints of the first issue (which substitute the names and addresses of the other co-publishers for that of the principal publisher Robert Allott), of which the Aspley imprint is decidedly one of the rarest. “These publishers were all proprietors of one or more of the copyrights of Shakespeare's plays,” observes Jackson, 'but their interests were much less than Allott's and consequently the proportion of copies issued with their names in the imprint was much smaller.” OCLC/WorldCat lists only five copies with the Aspley imprint, at the Folger Library, the Huntington, UCLA, the Bayerische Staatsbibliothek, and one not located (but possibly a duplicate listing of the latter). All the variants have the same colophon: “Printed at London by Thomas Cotes, for John Smethwick, William Aspley, Richard Hawkins Richard Meighen, and Robert Allot 1632.” The work was reissued in c. 1642 with a newly printed titlepage and conjugate “Effigie’s” leaf. This copy contains the “Effigies” leaf in its integral first state (Todd 1b). Called the “Soul of the Age,” Shakespeare captured the human experience with a pen “true to nature” and with the largest recorded English vocabulary of any known individual. Shakespeare’s plays resonate with a universality transcending culture and time, and he is justly deemed the most famous writer in the world. 2016 marks the 400th anniversary of Shakespeare’s death, an event being marked worldwide. STC 22274; Greg III, pp.1113-1116; PMM 122 (1st Folio). Lot Amendments Condition: The contents were expertly and discreetly cleaned, the preliminary leaves and the final leaf flattened, with a few minor marginal repairs evident; an exceptional, handsome copy, rarely found in such condition. Item number: 271625 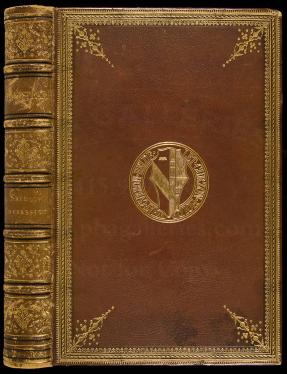