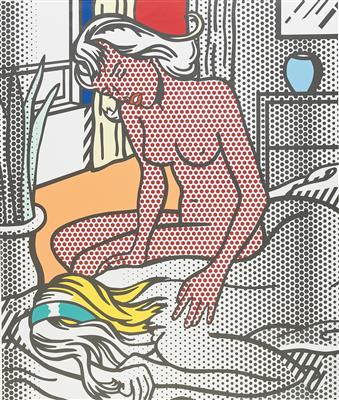 (New York 1923–1997) Two Nudes, 1994, signed, dated rf Lichtenstein 94, coloured relief print on Rives BFK, image size 105.5 x 89.1 cm, sheet size 121.7 x 104.5 cm, no. 14 from the edition of 40, printer and pub. Tyler Graphics, Mount Kisco, New York (blind stamp), framed Provenance: Tylor Graphic, Mount Kisco, New York Galerie Burkhard Eikelmann, Düsseldorf - acquired from the above in 1997 Private Collection, North Rhine-Westphalia - acquired from the above Literature: Mary Lee Corlett and Ruth E. Fine, The Prints of Roy Lichtenstein - A Catalogue Raisonné, 1948–1997, New York 2002, II. 284, p. 256 The print “Two Nudes” is part of a series of nine silkscreens, made in 1994 by pop artist Roy Lichtenstein on the subject of nudes. The series was published by Tyler Graphics Ltd, Mount Kisco in New York and is listed in the catalogue raisonné of Roy Lichtenstein’s prints, under the title Nude Series. Lichtenstein devoted the final years of his short life to this central theme of art history. He began working on collages for the Nudes series in his New York studio in the spring of 1993. In contrast to his early works, Lichtenstein cut out the most important relief plates for each picture in the series by hand and by using different sized Ben-Day-dots, a completely new technique, he imitates a kind of shading. The two female nudes in the work “Two Nudes” are not realistically portrayed, but instead are represented in Lichtenstein’s well-known comic book style. For the Nudes series, the artist combined comic strip illustrations with his own compositions from early works, assimilating iconographic references to early series, such as Reflections (1988) and Interiors (1989/90). The heavily geometric imagery contrasts with the two female bodies. The work also abolishes the conventional distinction between foreground and background; this, however, does not lead to the abolition of three-dimensional space, rather, the design of the scenery nods to a three-dimensional pictorial space. In contrast to Lichtenstein’s early works, the Ben-Day-dots in this monumental print move freely, like waves across the surface of the picture and remain detached from the individual surfaces of form and colour. While Lichtenstein mainly used primary colours and a reduced colour palette in his early works, in this image he makes use of other colours, including mixed colours, such as a strong orange. The striking strong black outline, typical for the works of Roy Lichtenstein separates the individual areas from one another. In his late work Roy Lichtenstein returned to the female body as a pictorial motif, but in a more provocative way than in his comic works of the 1960s. With the Nudes series, the artist dedicated himself for the first time in his extensive oeuvre to the theme of the nude. Today, the works from the Nudes series are perfect examples of Lichtenstein’s late Pop Art style of the 1990s.