On the victory at Yorktown 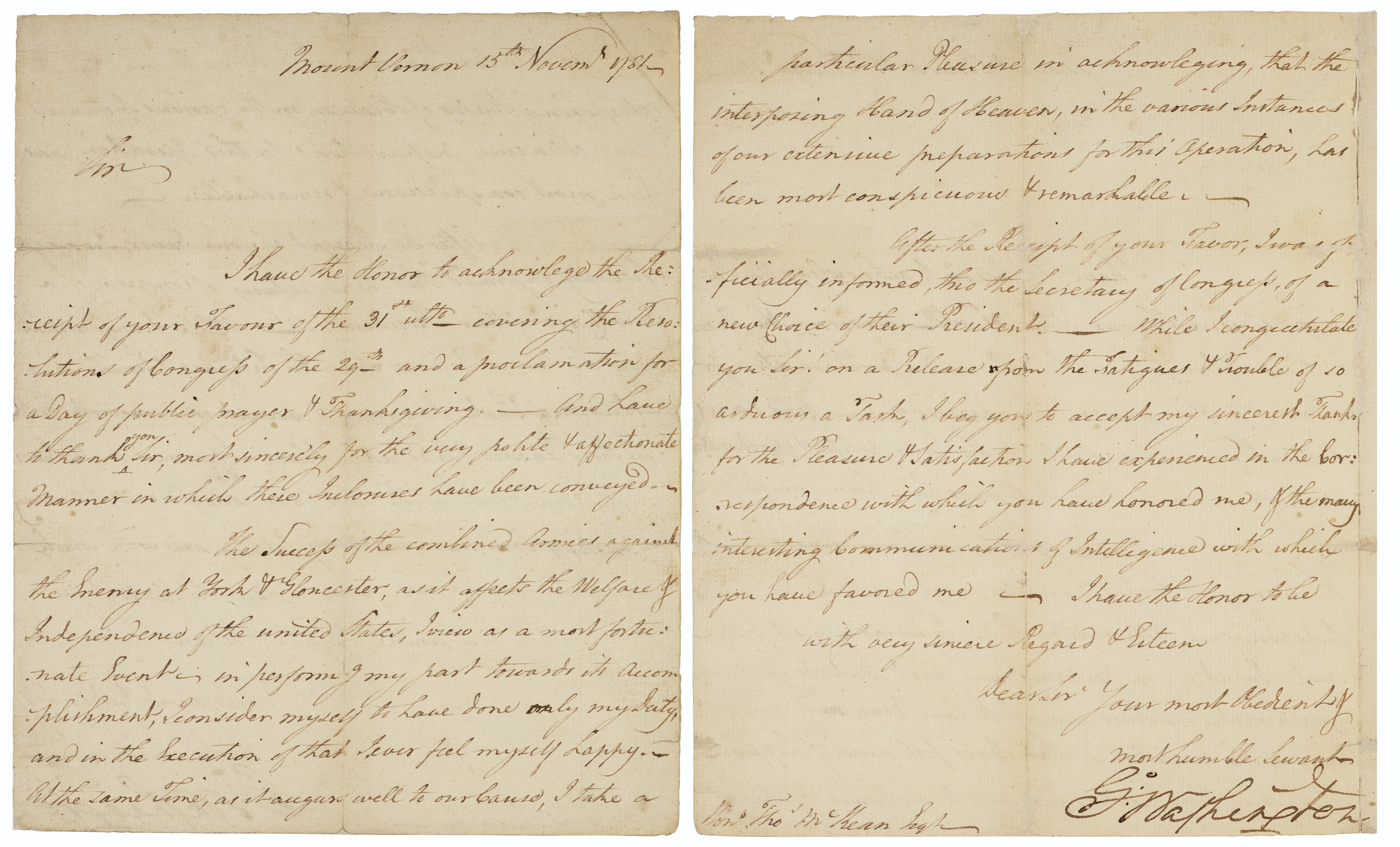 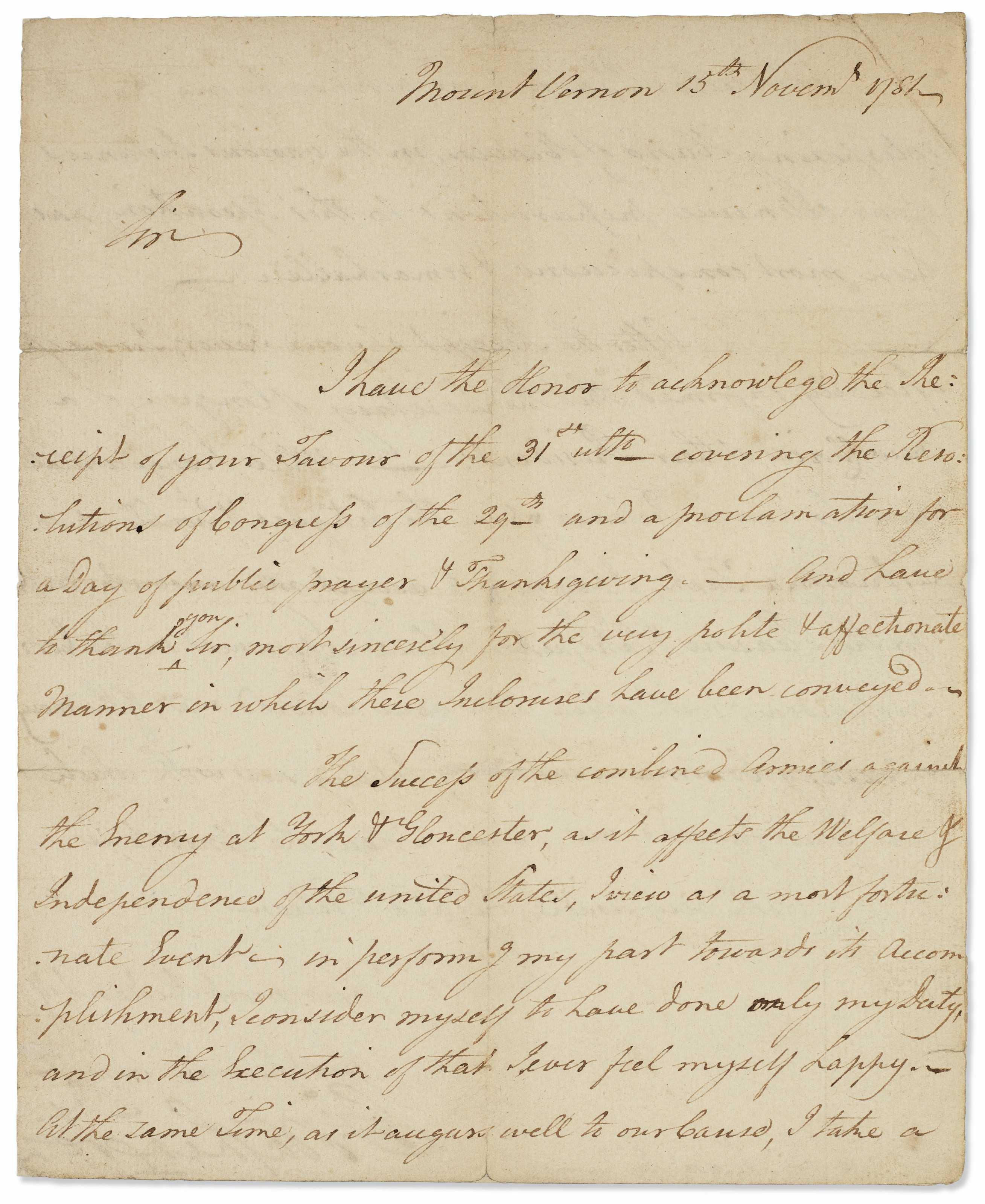 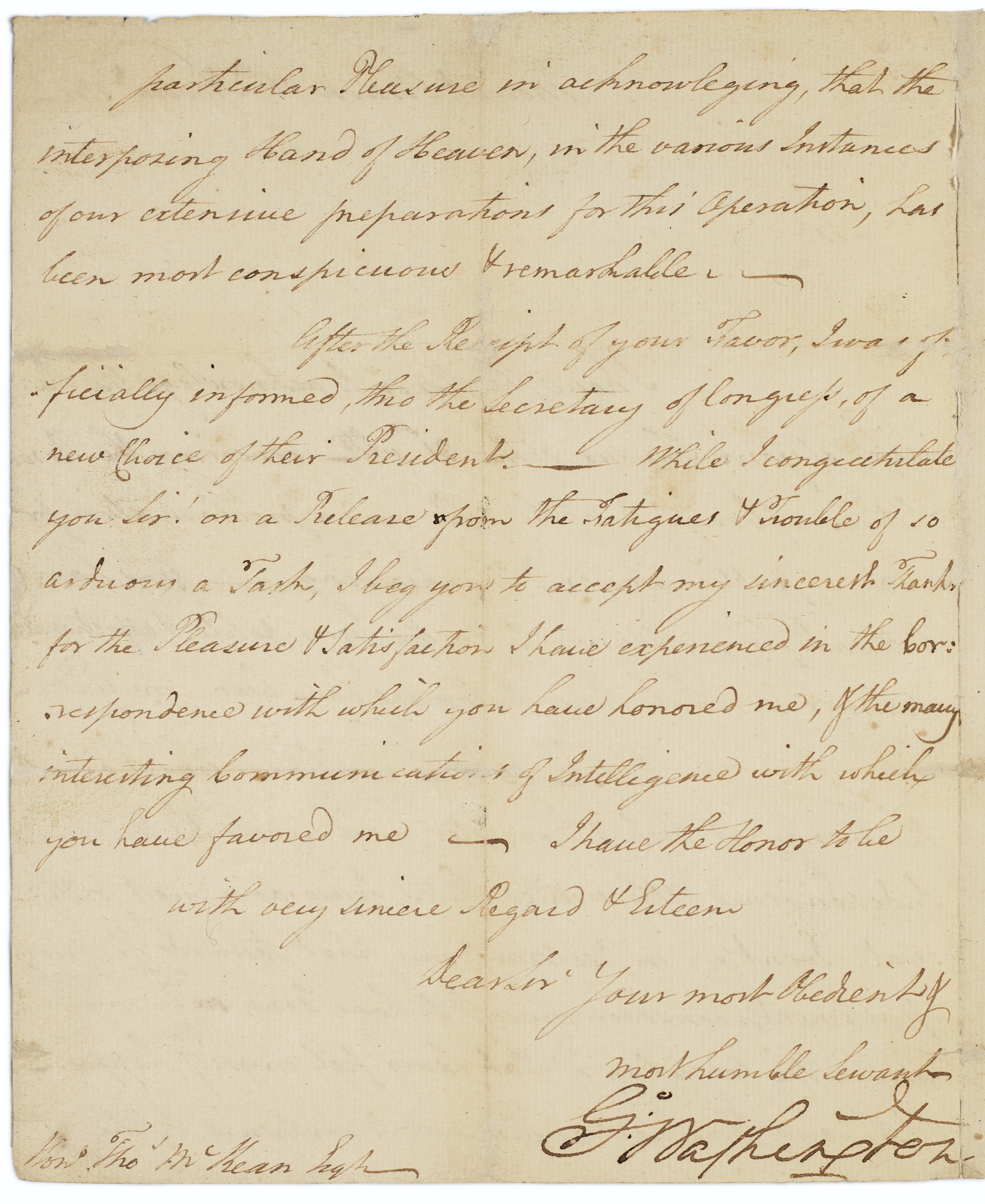 On the victory at Yorktown George Washington, 15 November 1781 WASHINGTON, George (1732-1799). Letter signed (“Go:Washington”) as Commander-in-Chief of the Continental Army to Thomas McKean, Mount Vernon, 15 November 1781. Two pages, 210 x 169mm, bifolium (light soiling along vertical center fold, crease at top right corner). Body of the letter in the hand of Jonathan Trumbull. "the interposing Hand of Heaven ... has been most conspicuous & remarkable" Reflecting on the victory at Yorktown. Writing less than a month following the British surrender on 19 October, Washington reflects on the victory in response to the congratulations of Thomas McKean: “The Success of the combined Armies against the Enemy at York & Gloucester, as it affects the Welfare & Independence of the united States, I view as a most fortunate Event — in performing my part towards its Accomplishment, I consider myself to have done only my Duty, and in the Execution of that I ever feel myself happy — At the same Time, as it augurs well to our Cause, I take a particular Pleasure in acknowledging that the interposing Hand of Heaven, in the various instances of our extensive preparations for this Operation, has been most conspicuous & remarkable —" McKean's letter covered, as Washington noted, "the Resolutions of Congress of the 29th" October, congratulating Washington on his success, and "a Proclamation for a Day of public Prayer & Thanksgiving" to honor the happy event. Washington found it among the many congratulatory letters and addresses that greeted him upon his return to Mount Vernon on 13 November after weeks tending to the business of managing Cornwallis' surrender. McKean offered Washington effusive praise: "Words fail me when I attempt to bestow my small tribute of thanks and praise to a Character so eminent for wisdom, courage and patriotism, & one who appears to be no less the Favorite of Heaven than of his Country..." (McKean to GW, 31 Oct.1781) Washington's response to McKean appears at first perhaps overly modest, but the cautious Commander-in-Chief could not take Yorktown for granted. He was already planning the 1782 campaign when he confided to Virginia Governor Thomas Nelson that he feared that "instead of exciting our exertions, as it ought to do, [Yorktown] should produce such a relaxation in the prosecution of the war, as will prolong the calamities of it." (GW to Nelson, 27 October 1781). Washington felt similar trepidations upon learning the news of the French alliance in 1778, "and had seen his worst fears realized." (Southern). Fortunately for Washington, Yorktown proved to be the final blow for Lord North's government—opening the door to a government willing to negotiate peace in early 1782. Indeed as McKean had assured him in 1781, for his masterstroke at Yorktown Washington would be remembered as: "The Deliverer" of his country (McKean to GW, 31 Oct. 1781). Published in Fitzpatrick, Writings, Vol. 23, p. 342-343. Provenance: by descent from the family of McKean and Augustine Washington. Please note this lot is the property of a private individual.

On the victory at Yorktown 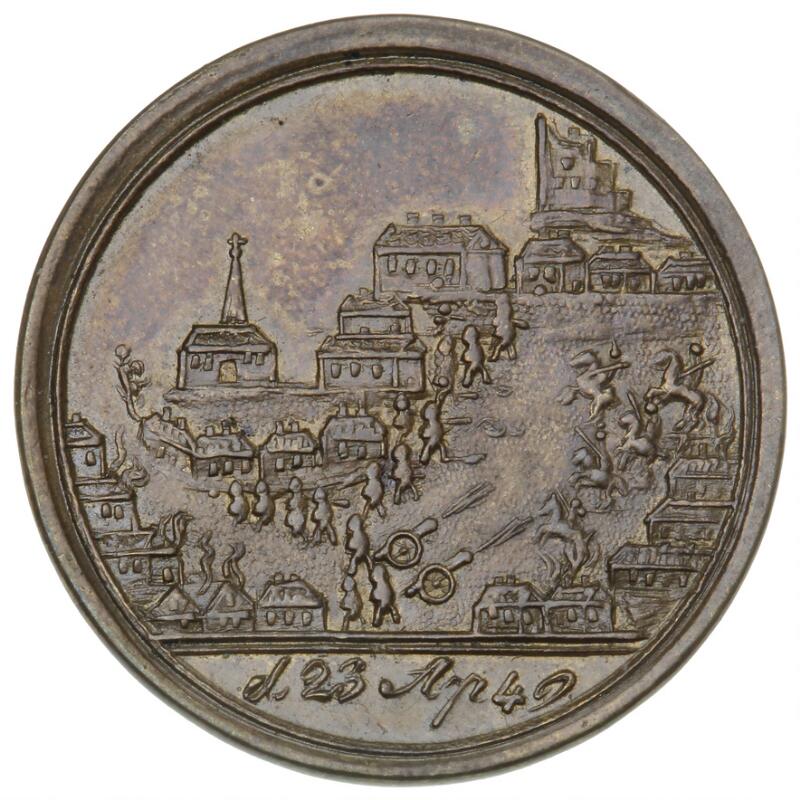 Frederik VII, The Battle in the Streets Speech of Mr. Cushing, of Massachusetts,

GEORGE SIEVERS (MASTER AT ARMS ON THE BE 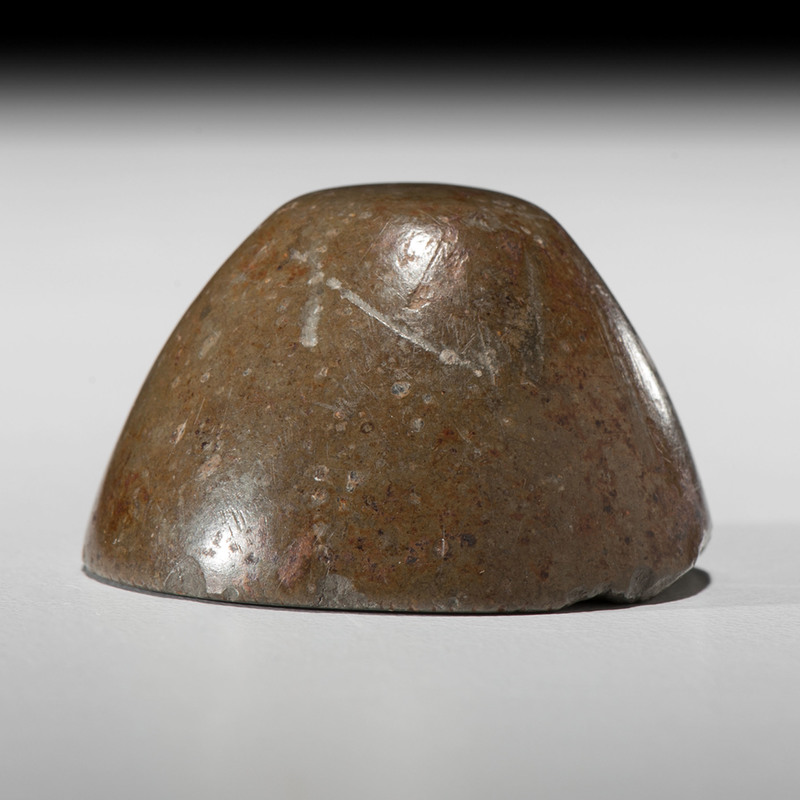 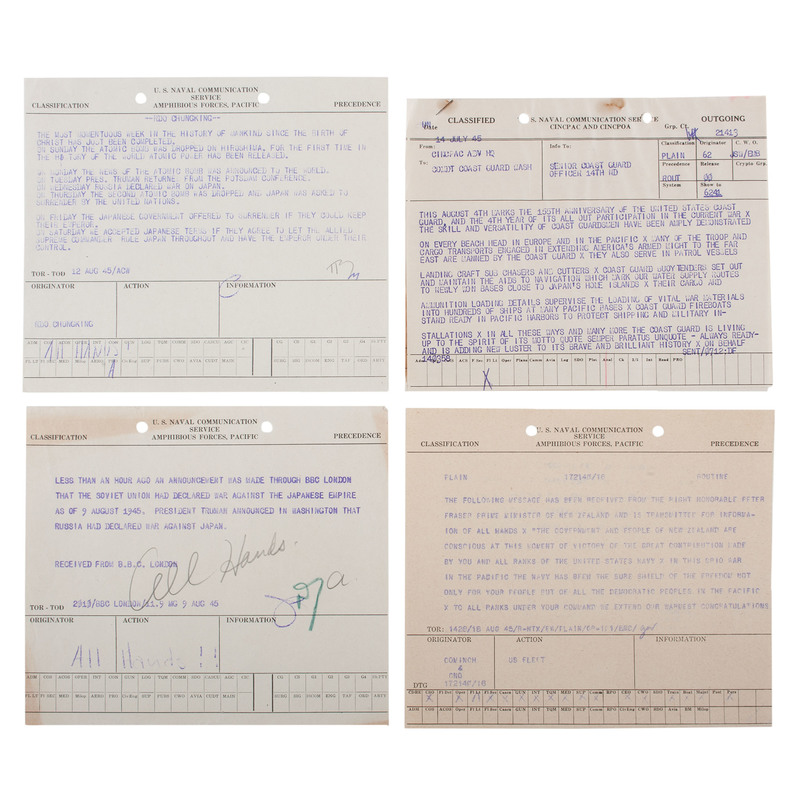 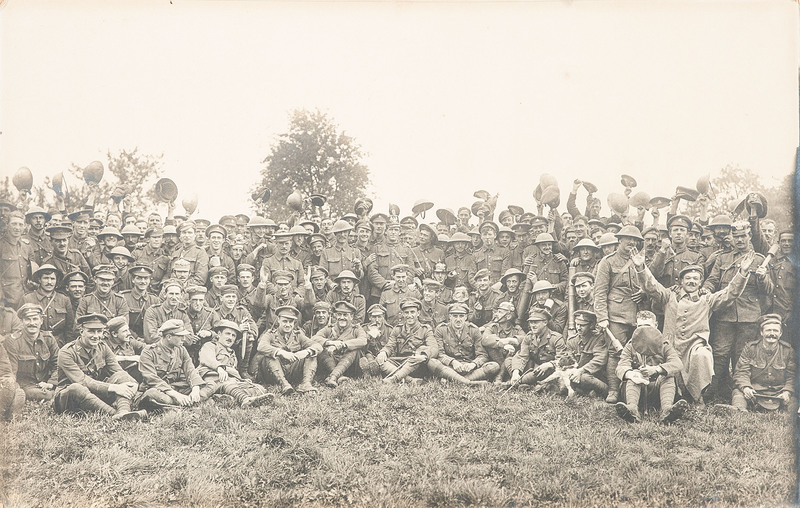