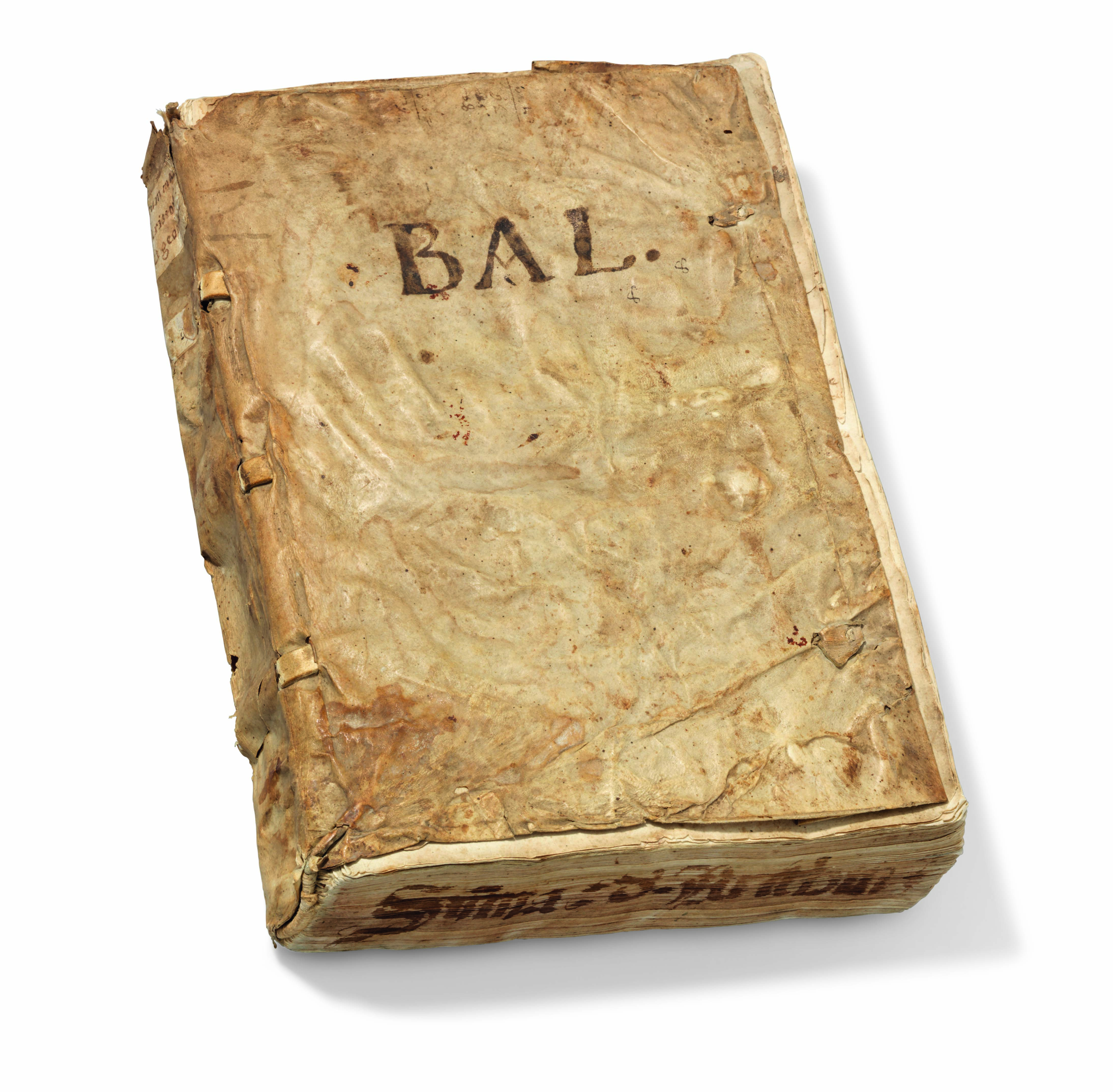 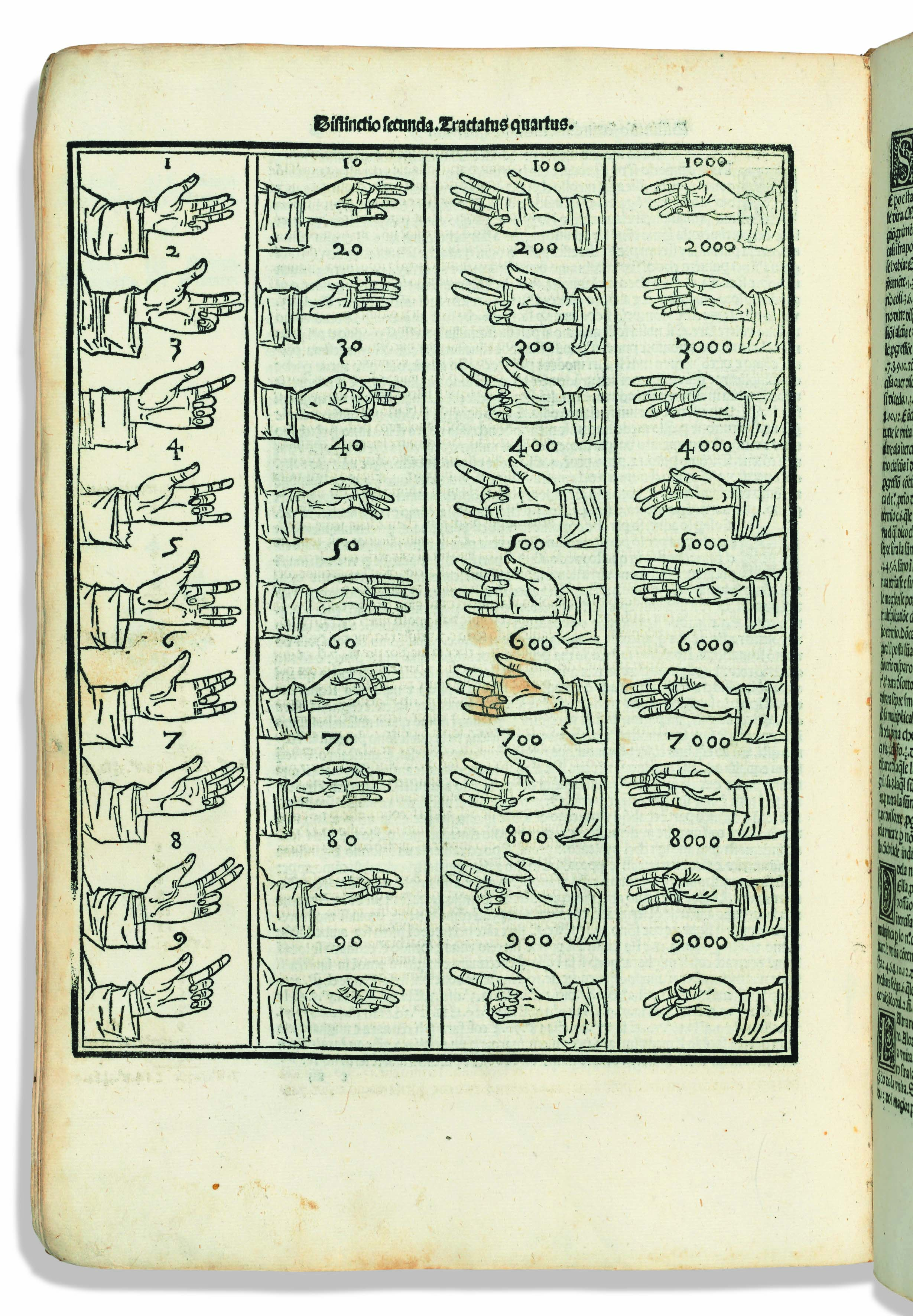 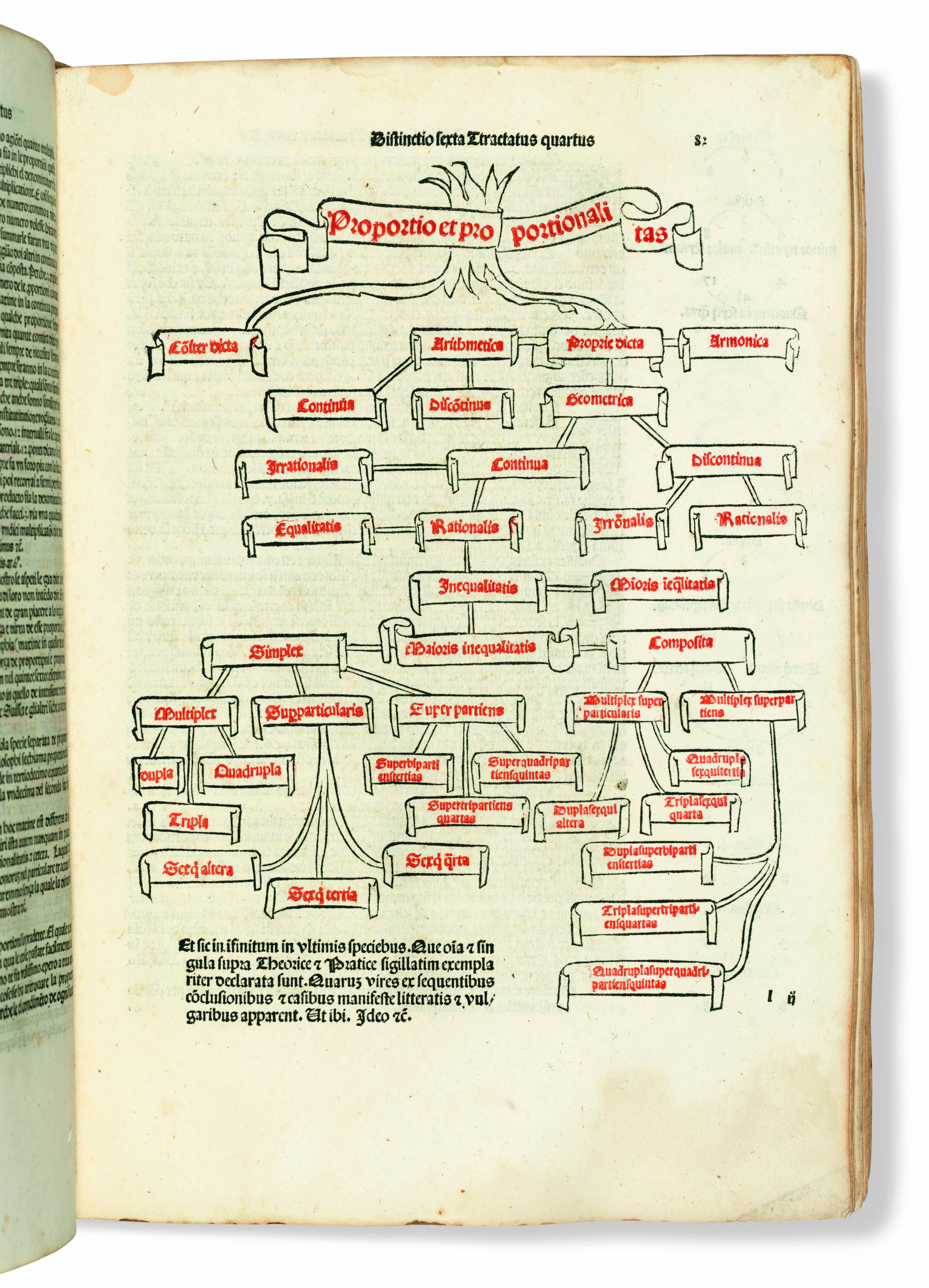 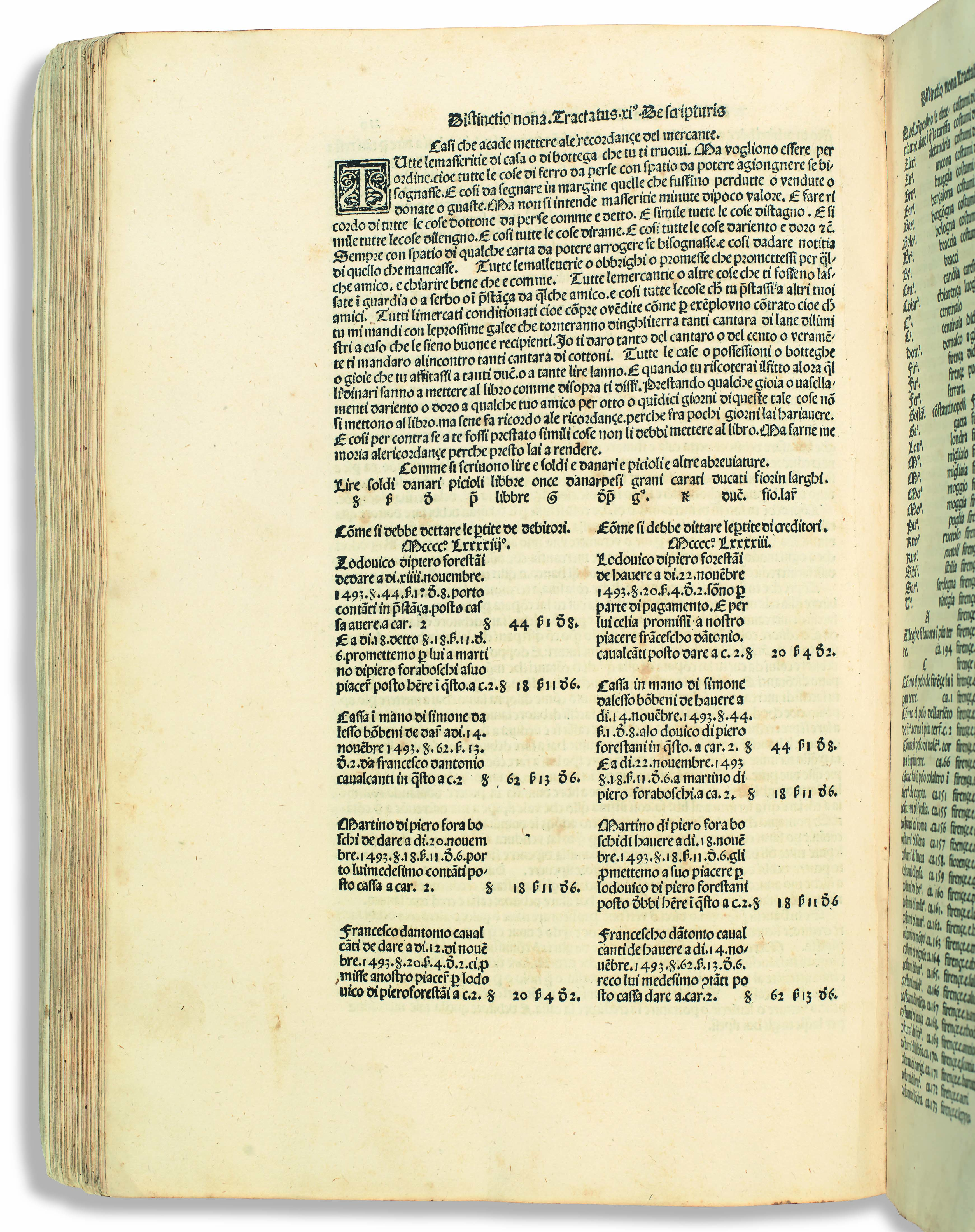 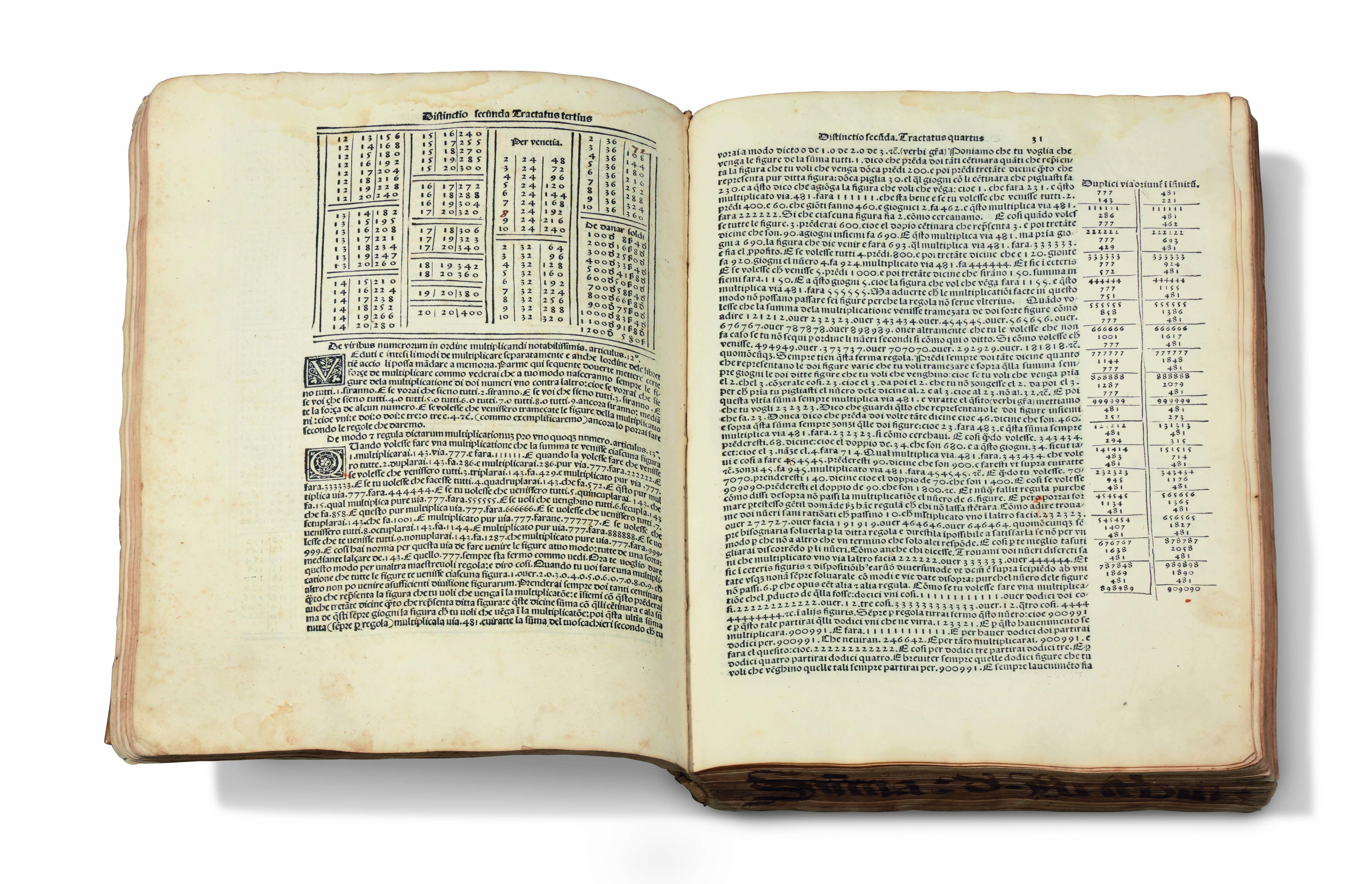 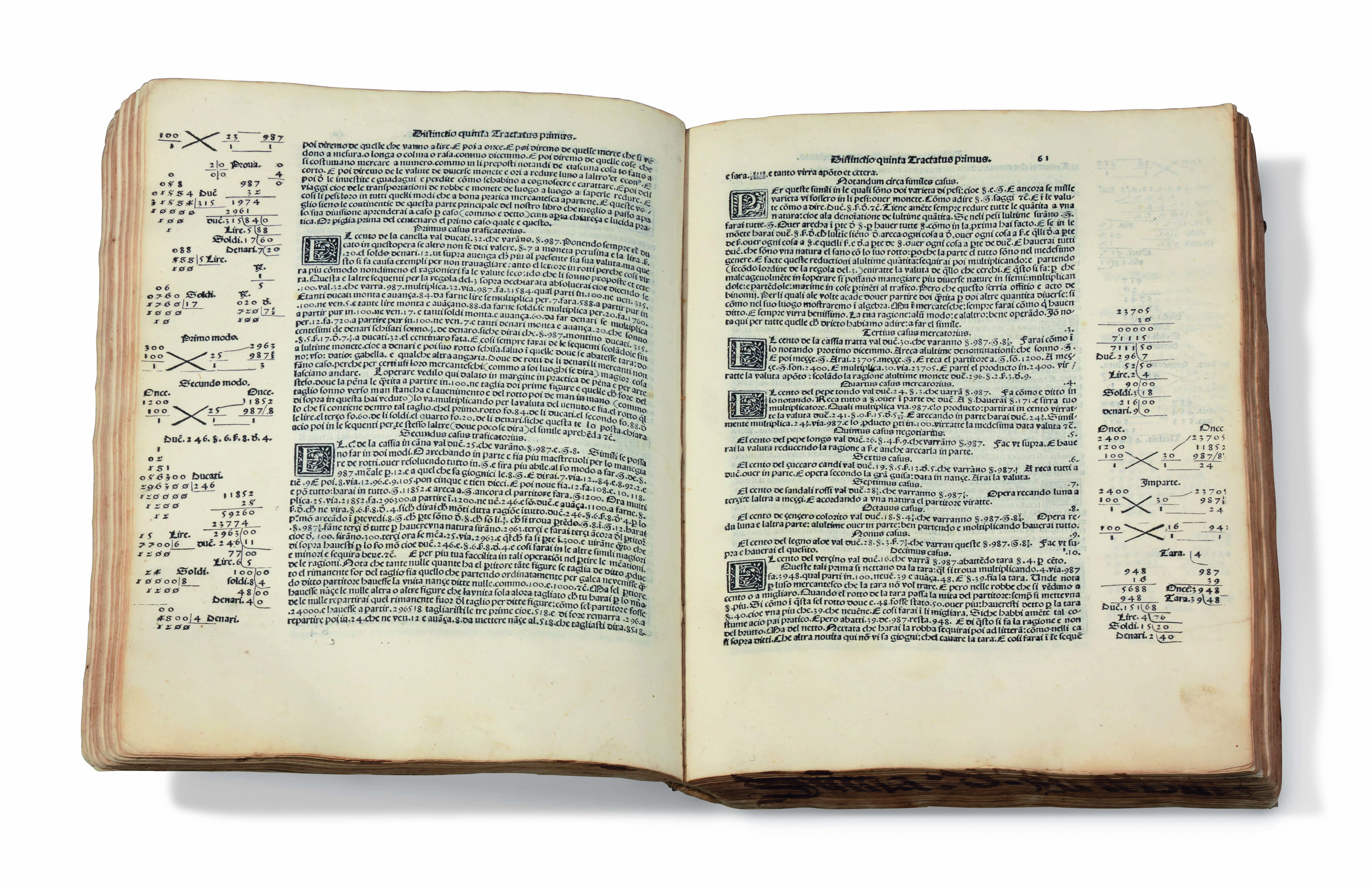 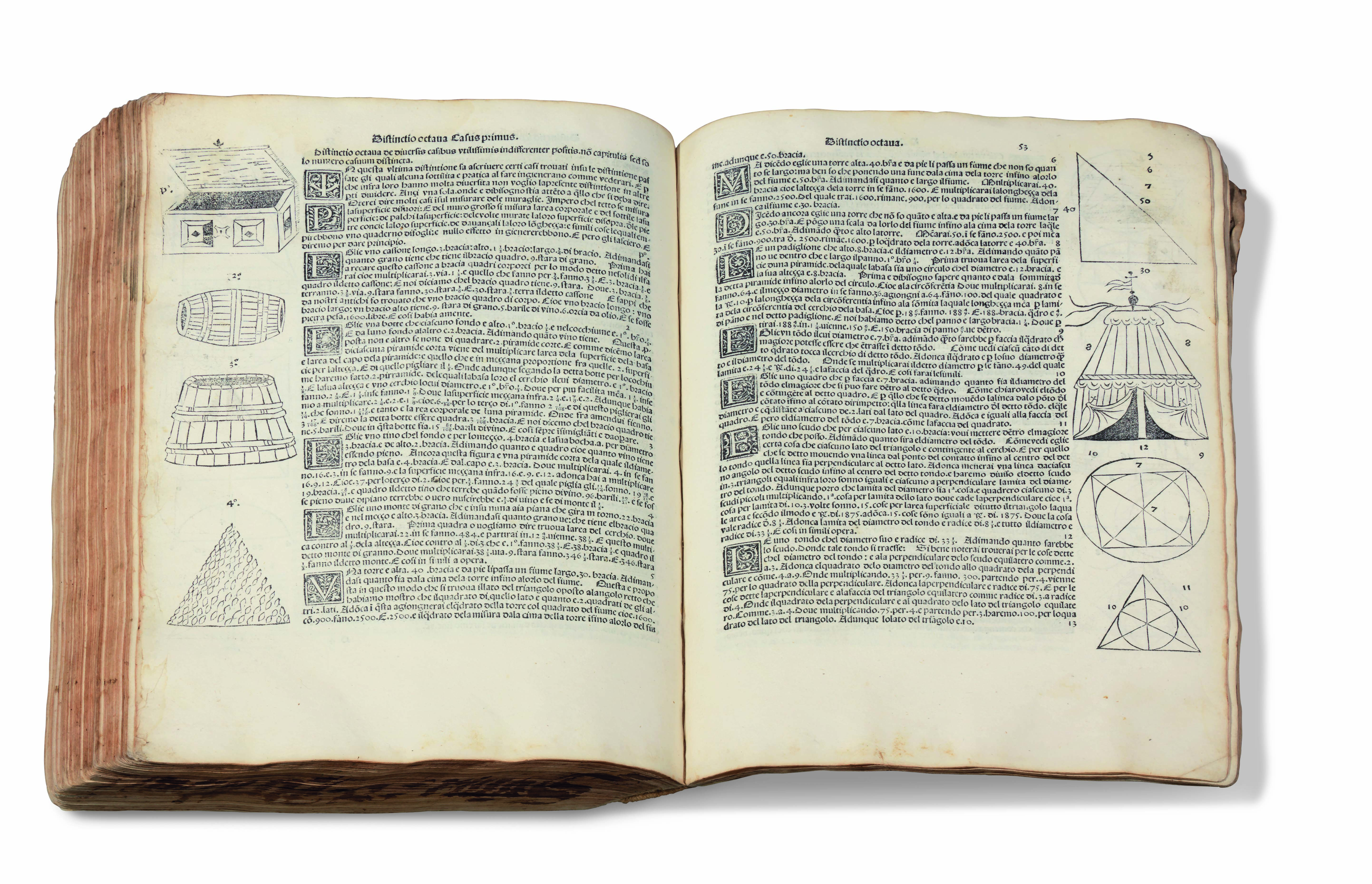 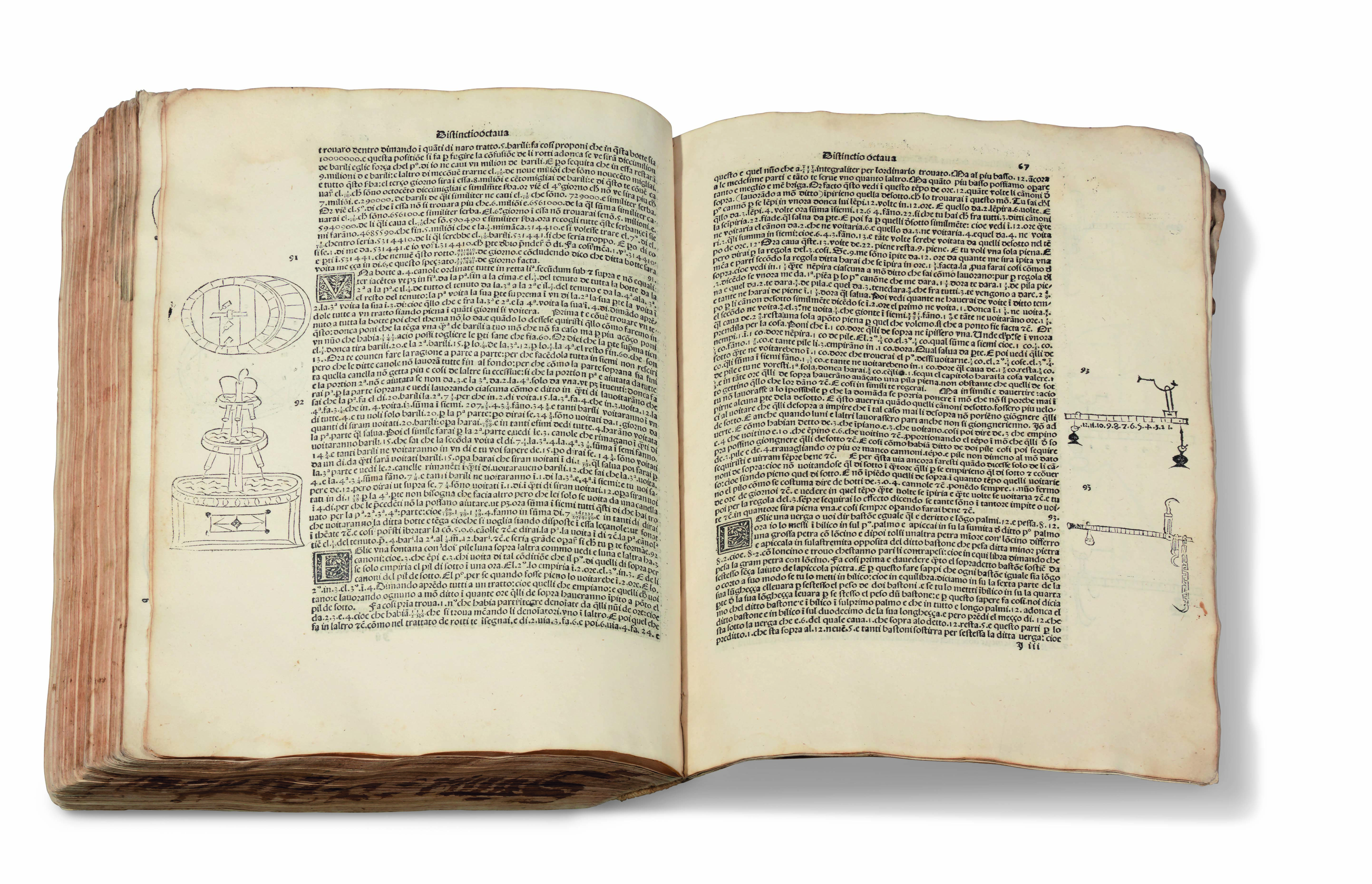 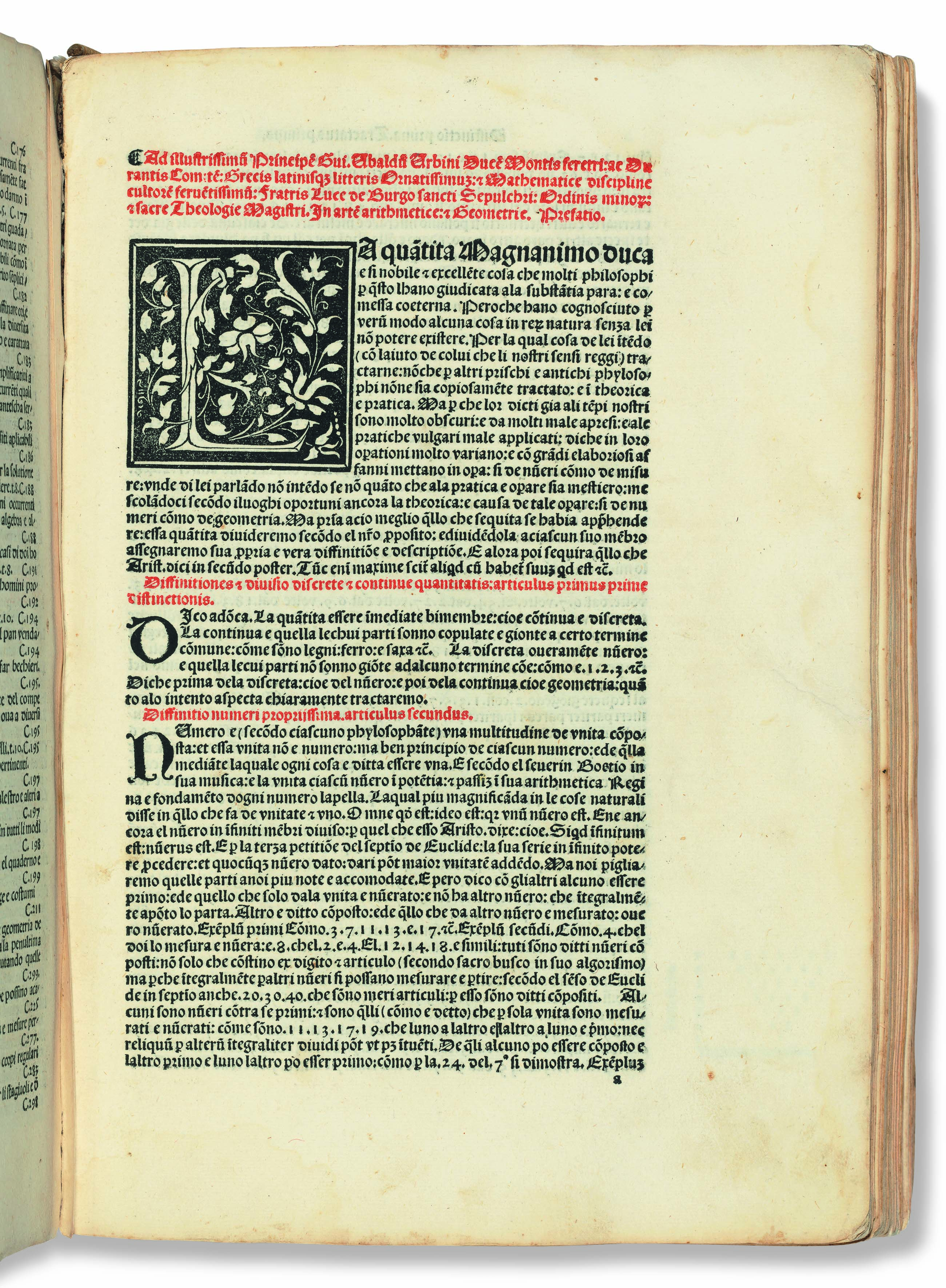 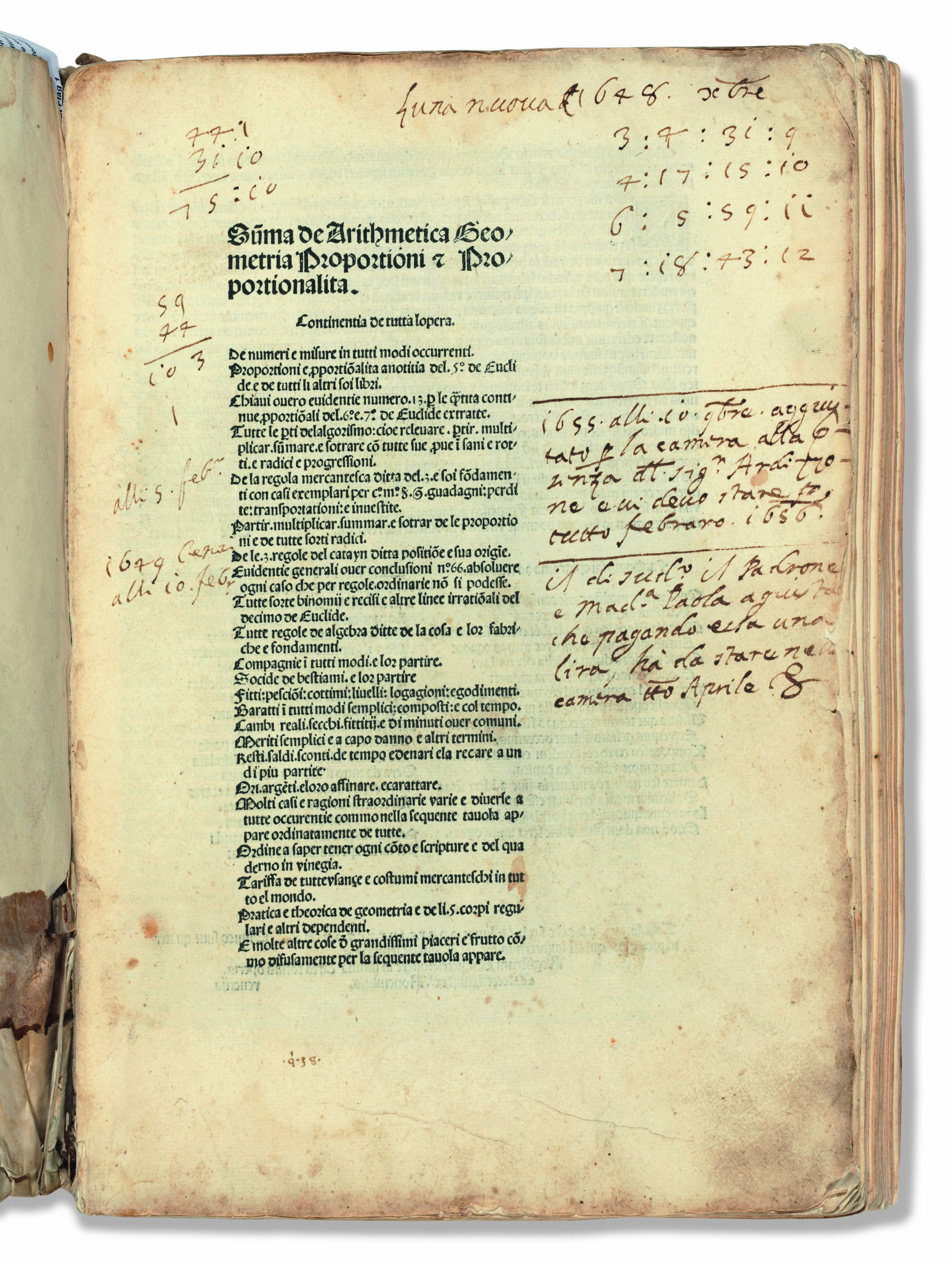 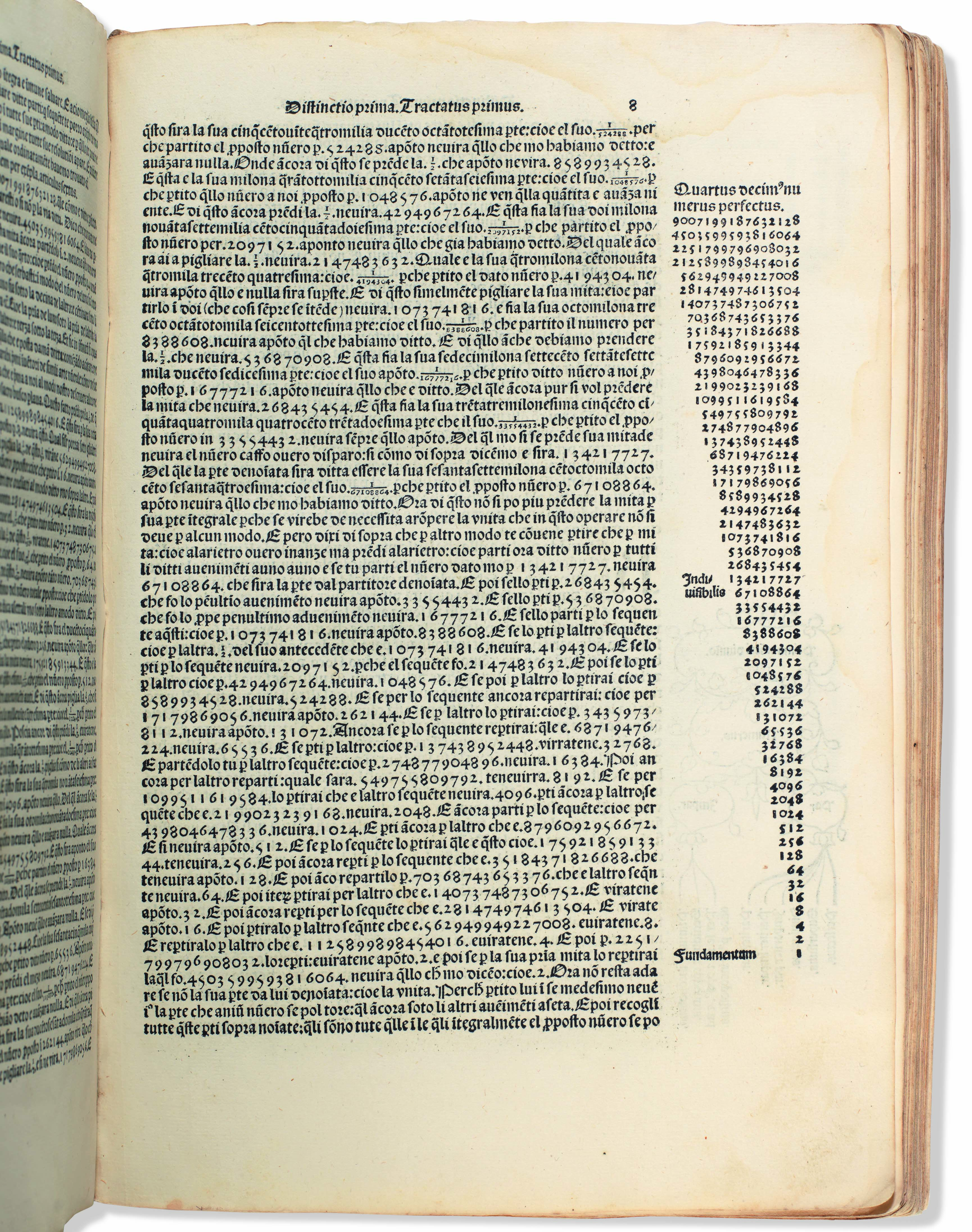 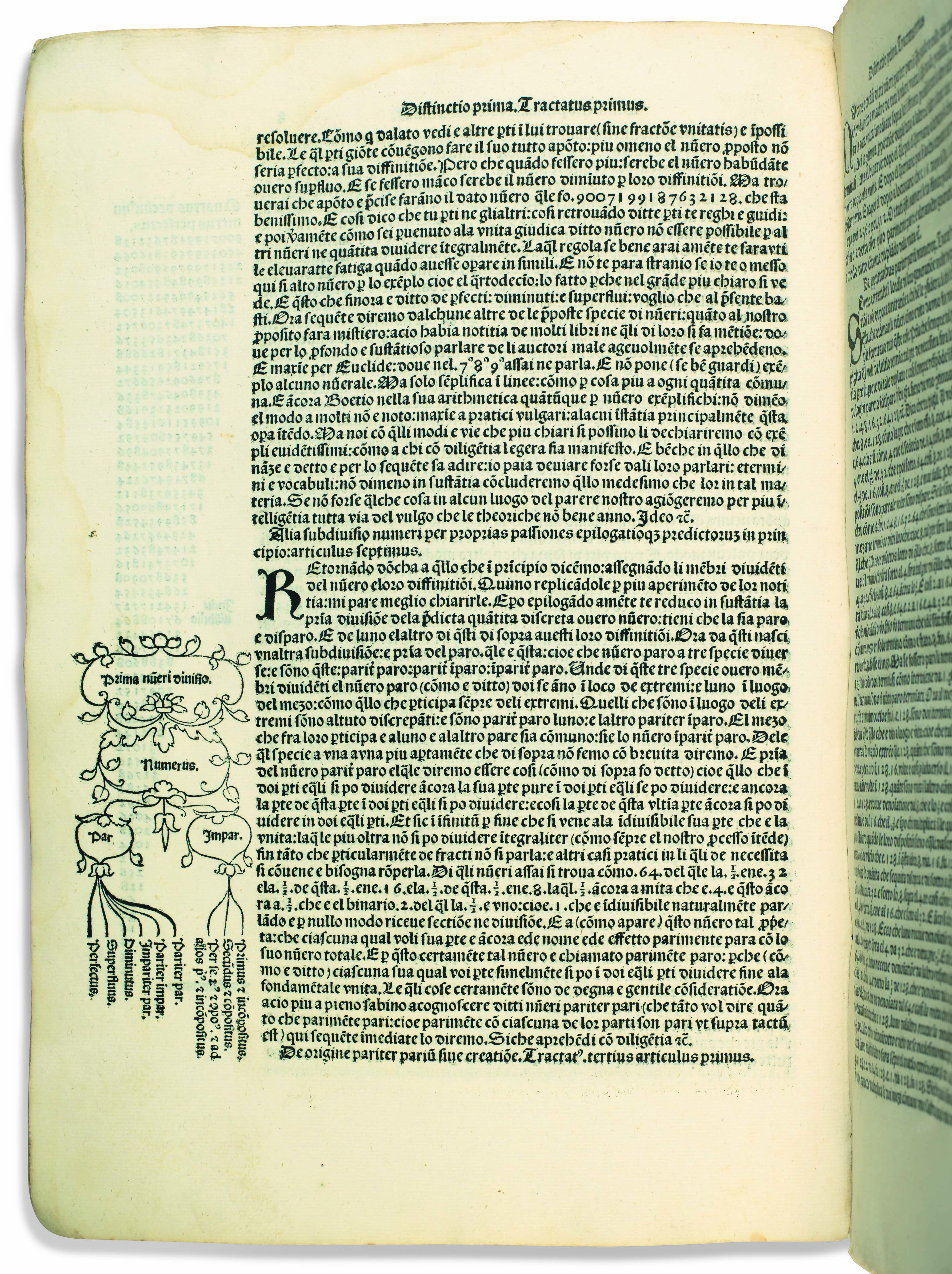 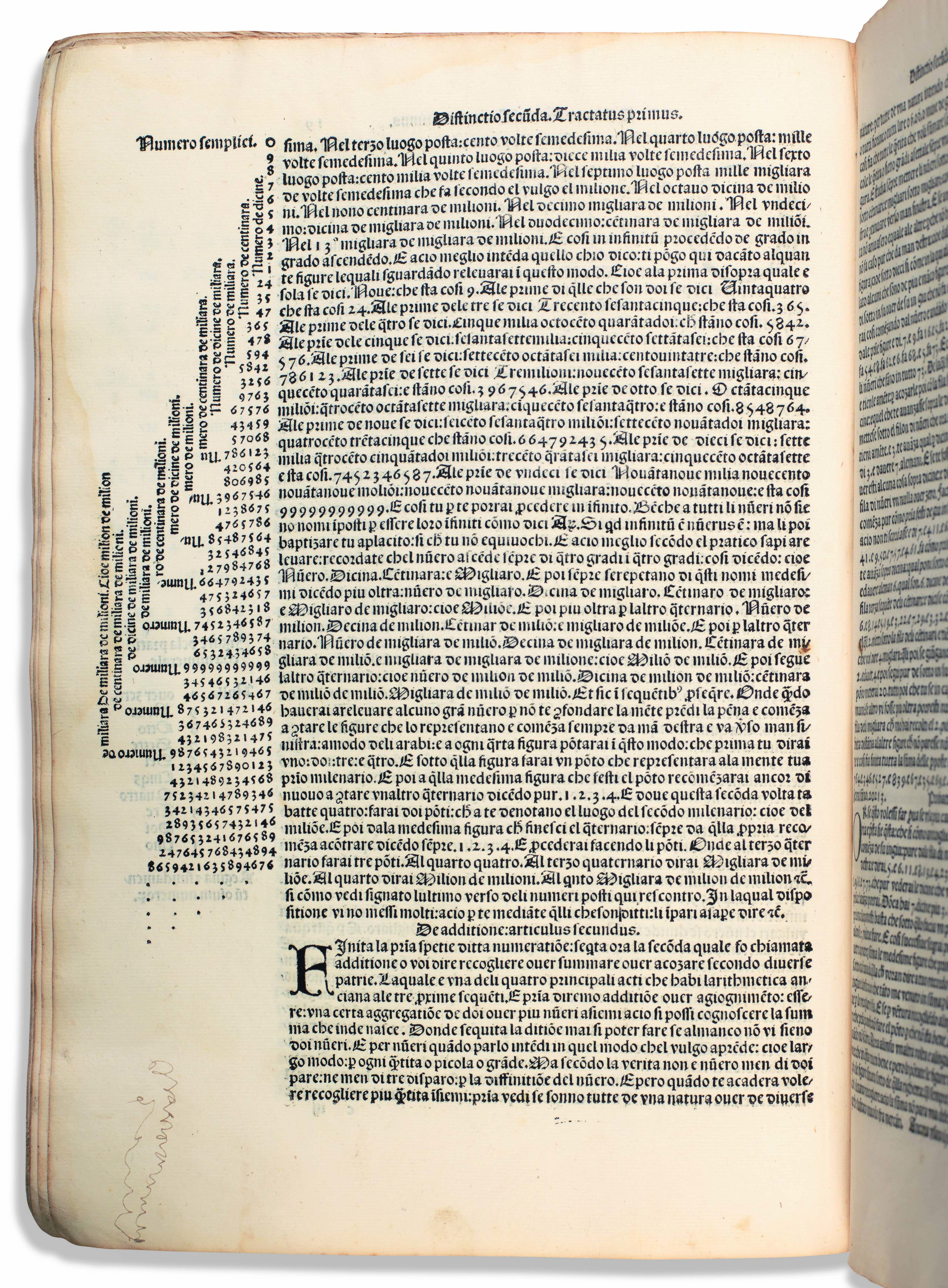 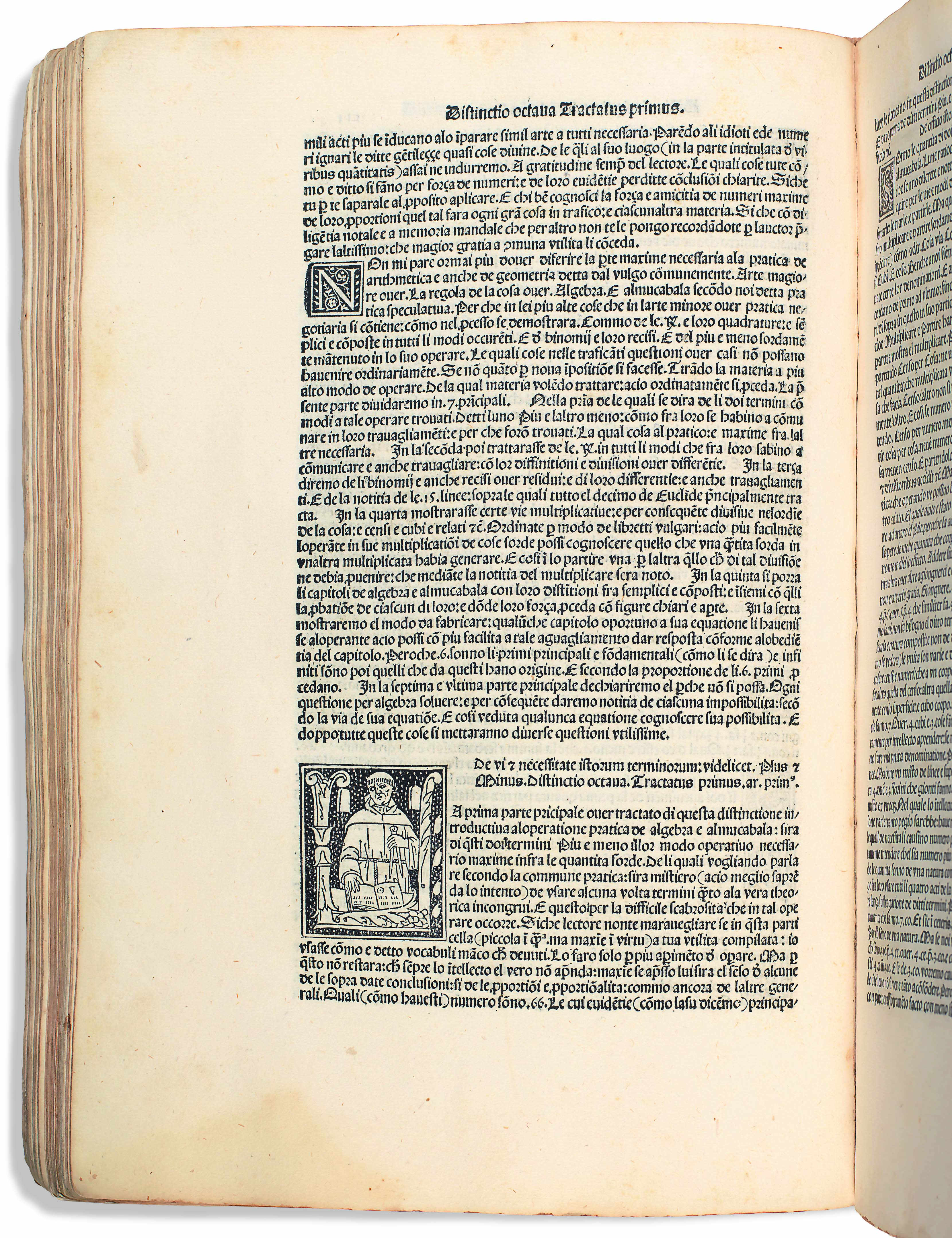 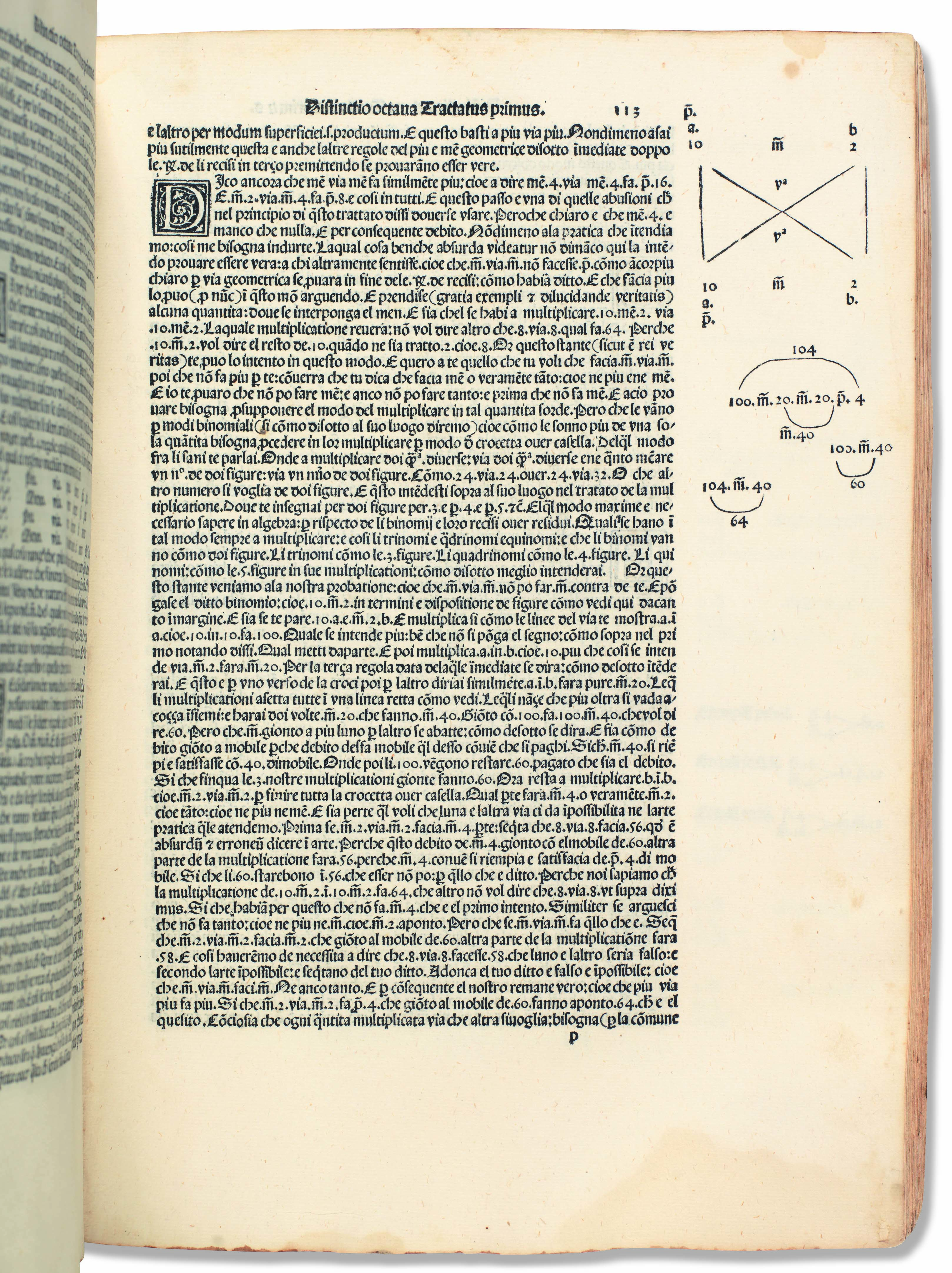 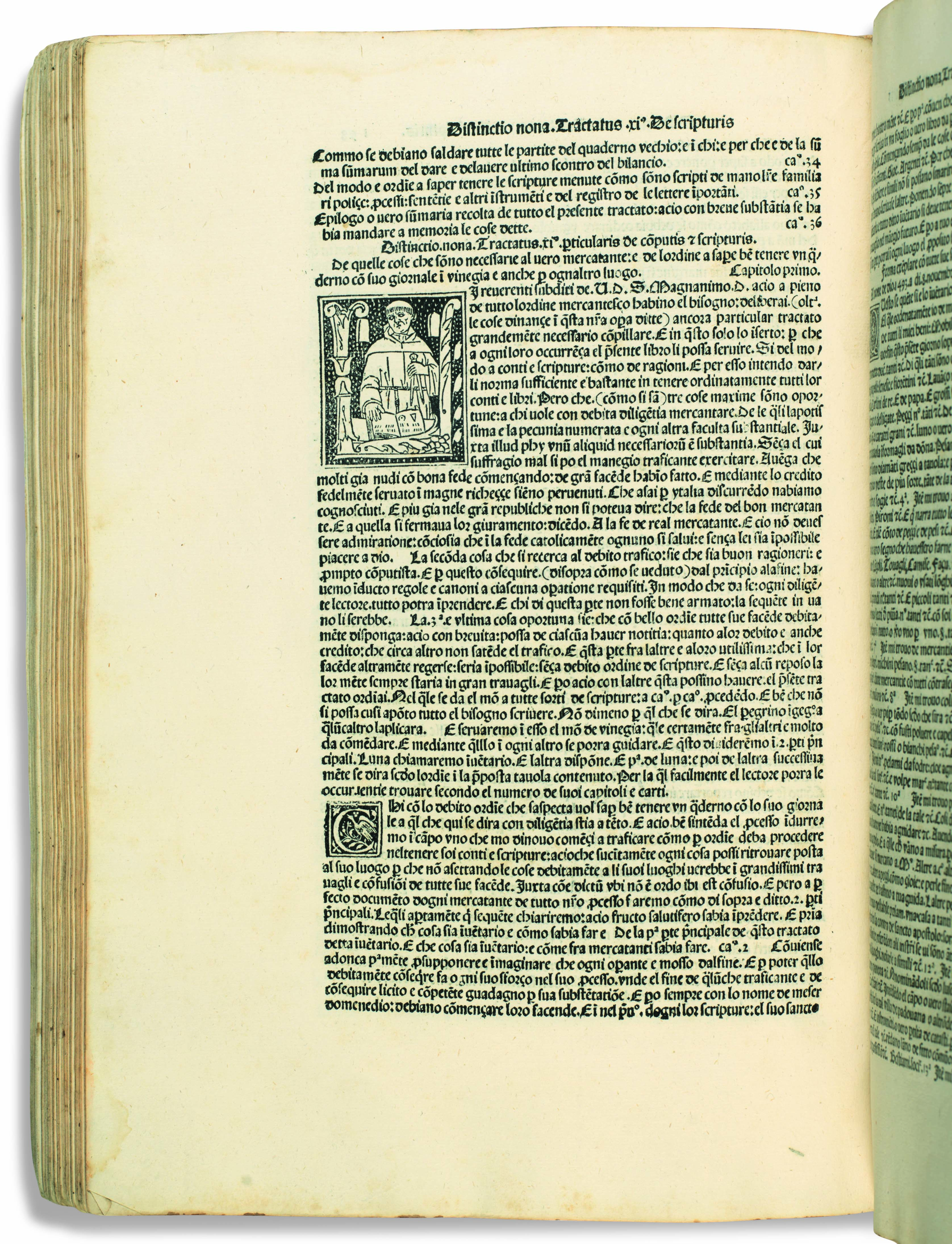 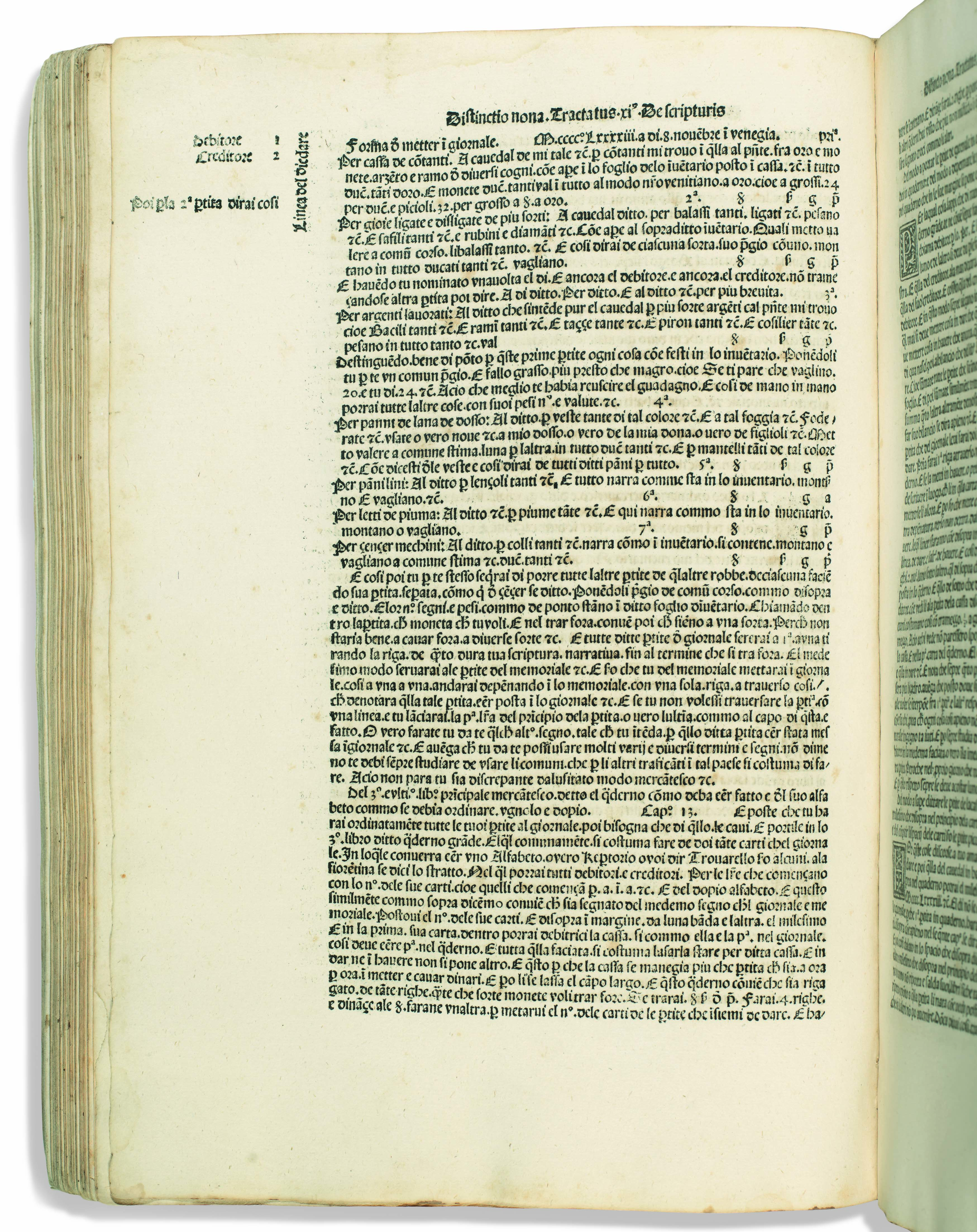 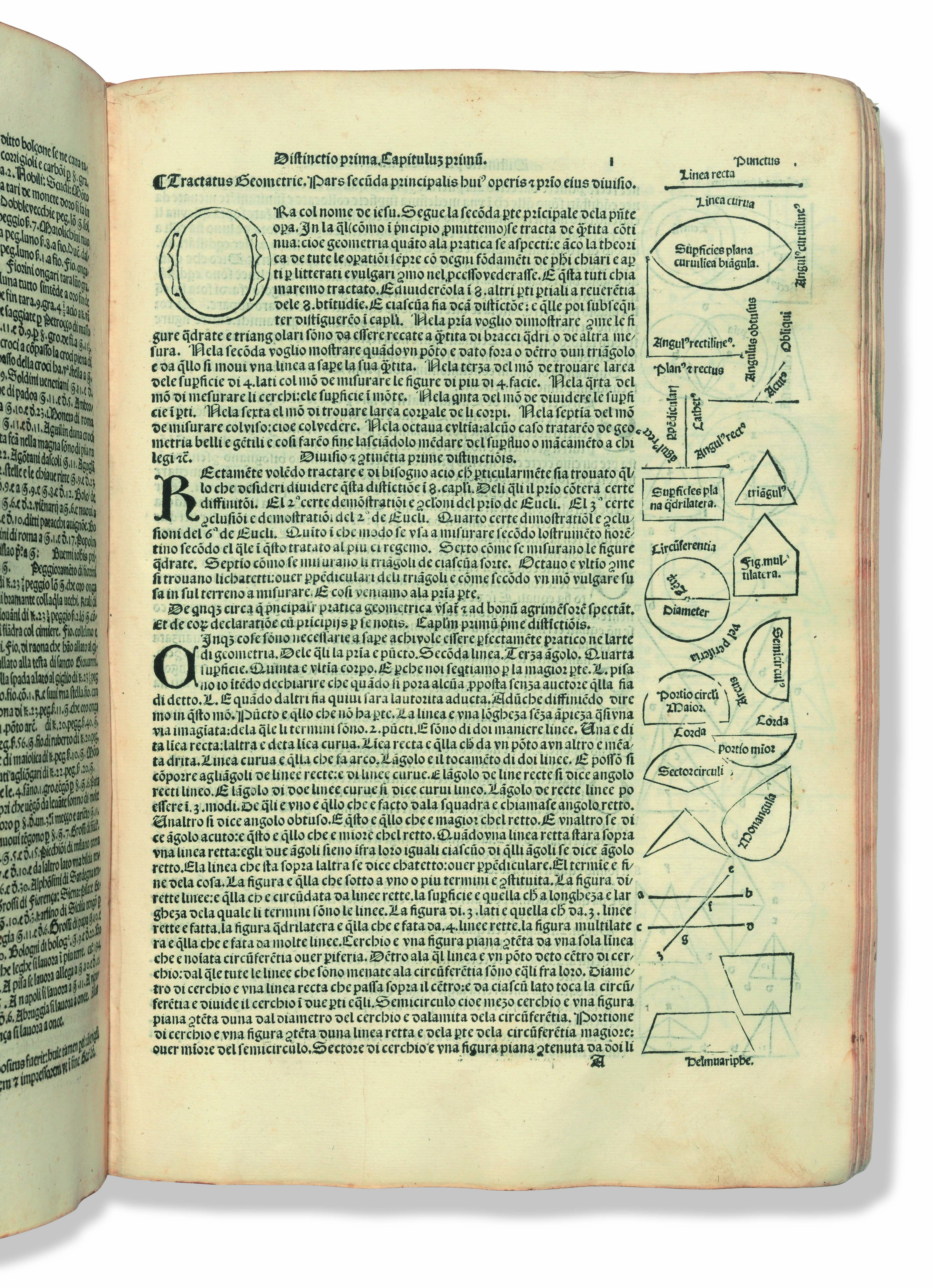 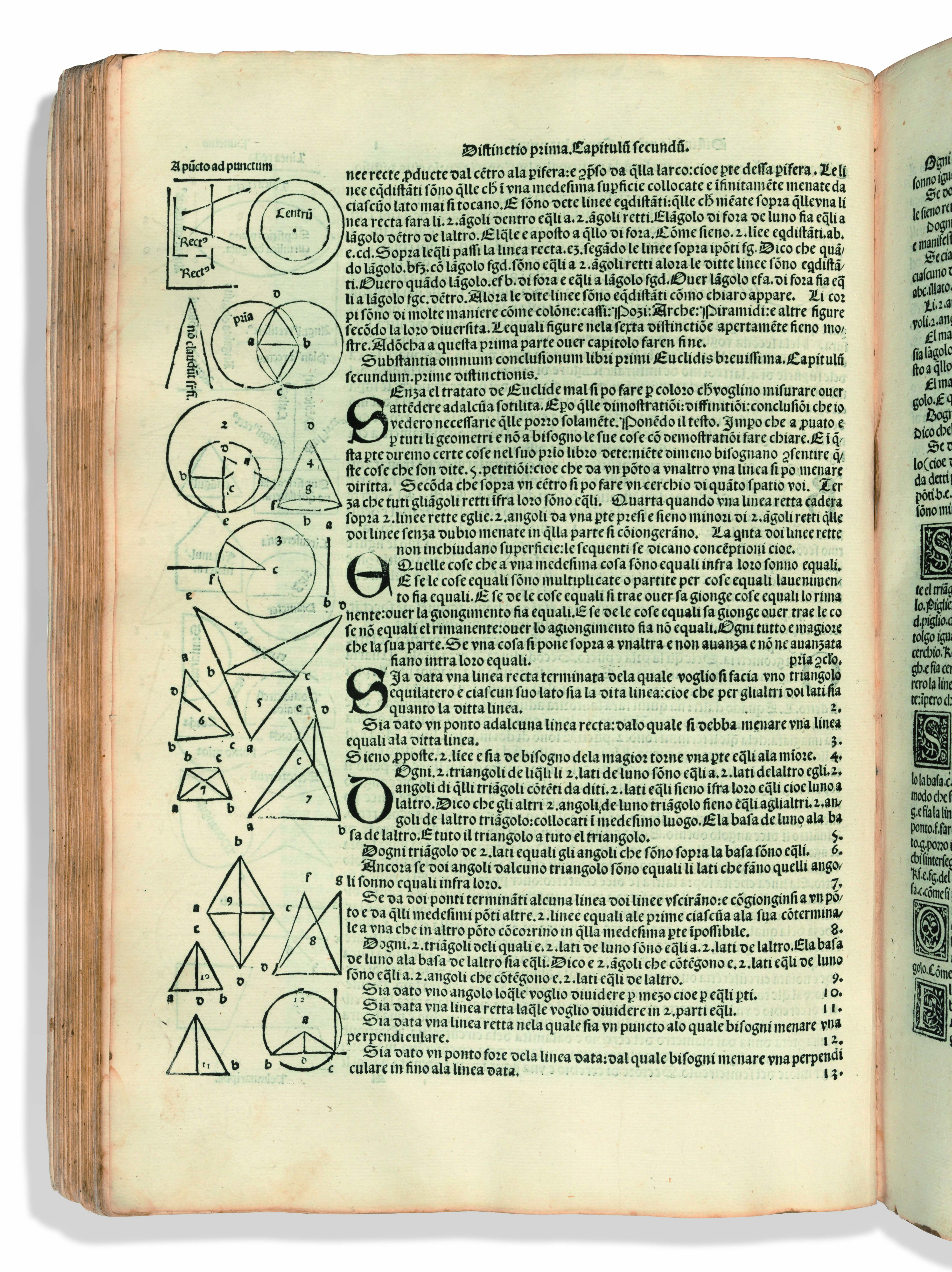 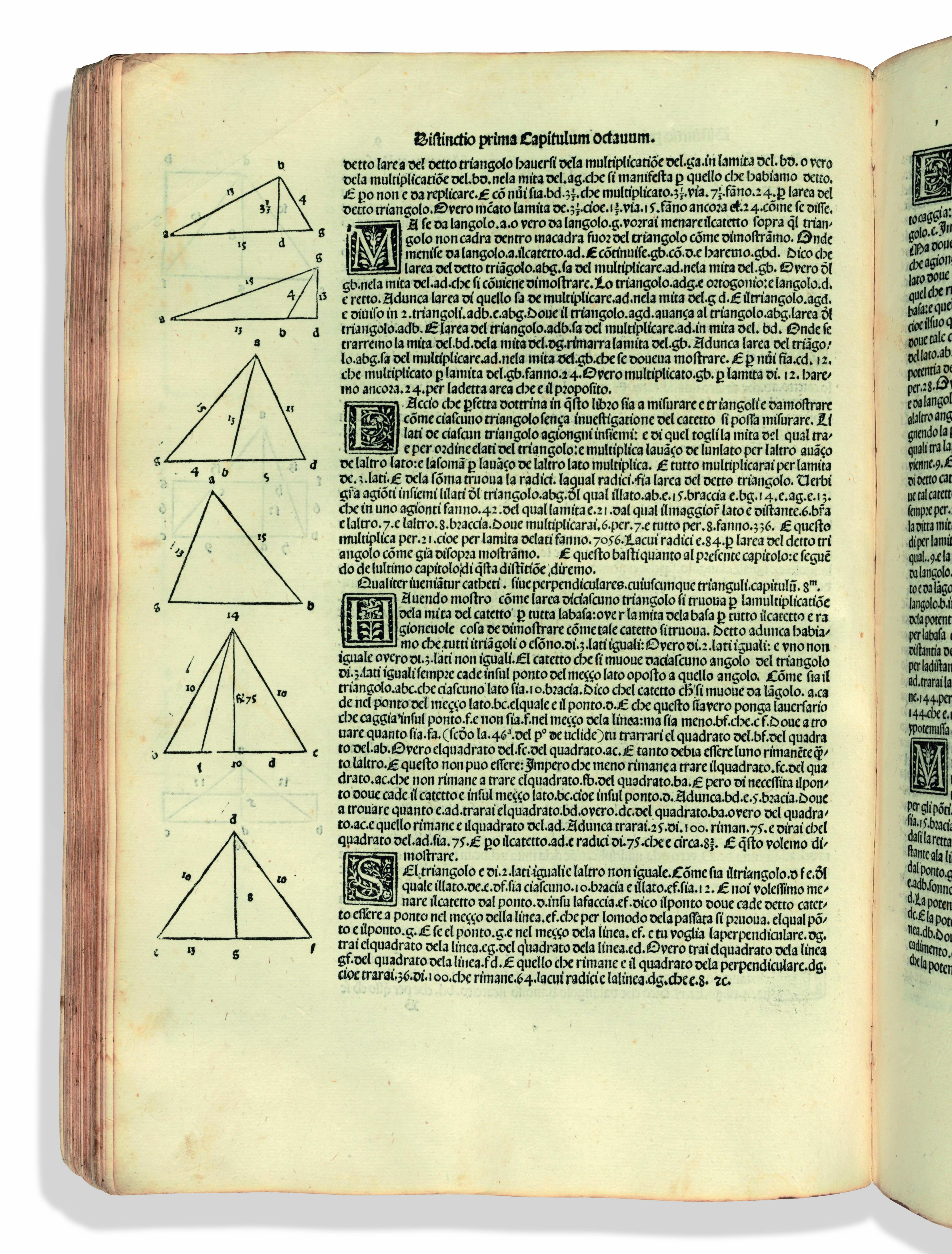 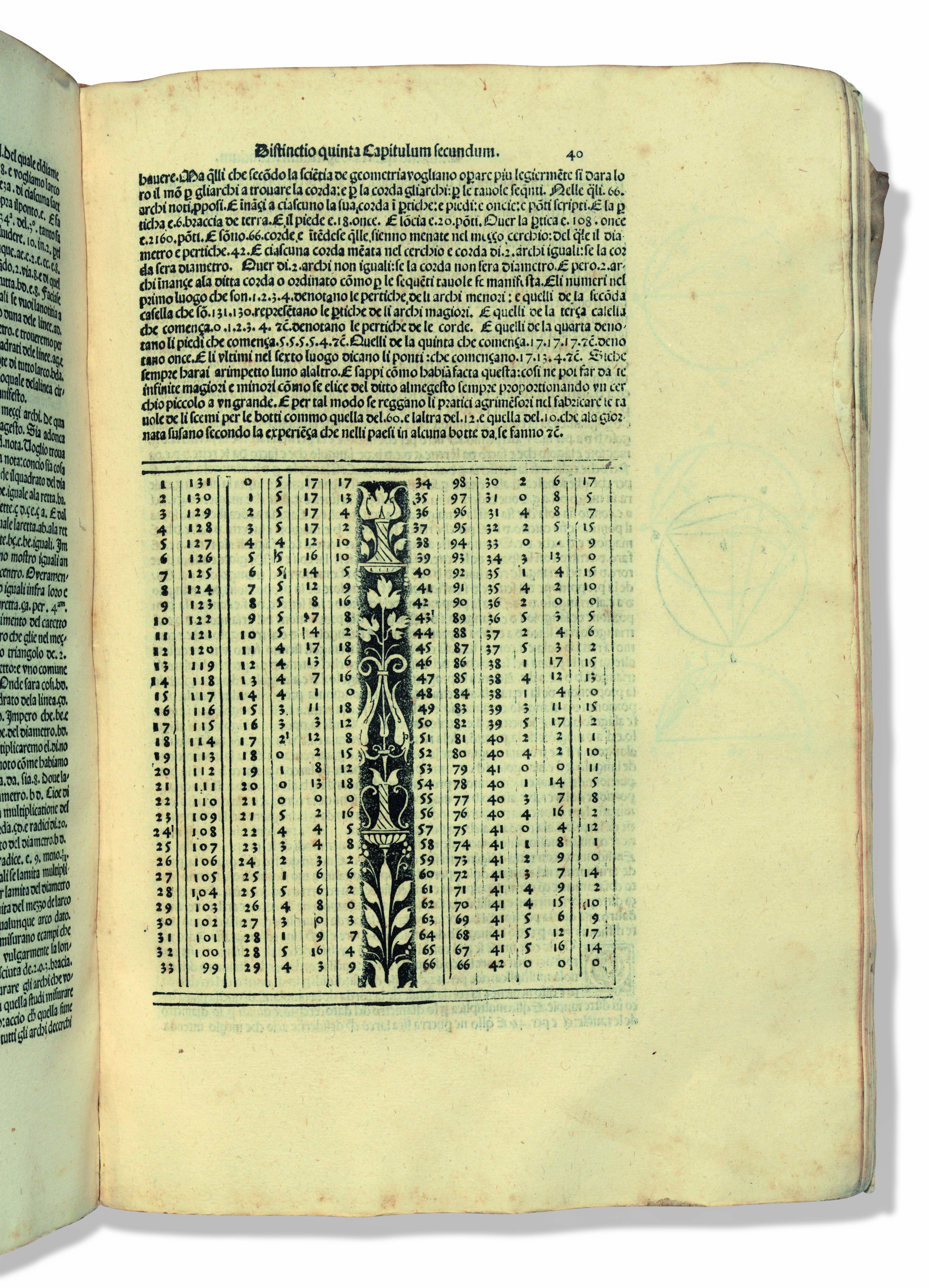 PACIOLI, Luca (Lucas de Burgo S. Sepulchri; c.1445-1517) . Somma di arithmetica, geometria, proporzioni e proporzionalità. Venice: Paganinus de Paganinis, 10-20 November 1494. First edition of Luca Pacioli’s Somma di arithmetica , a book which has profoundly shaped our modern economic world. This copy in strictly original condition. + The most important mathematical book of the Renaissance, of direct influence on Leonardo da Vinci + The birth of modern business: being the first published description and enthusiastic endorsement of double-entry bookkeeping, the Venetian mercantile practice which still underpins global trade + A milestone in technology and computing, containing the first appearances in print of: *mathematical statements using symbols for plus and minus *the name and many of the ideas of Fibonacci, the 13th-century mathematician who introduced Hindu-Arabic numerals to Europe + The first popular mathematical book: published in the vernacular and intended for use by the professional classes + Very rare on the market: the present copy is the only one in original binding, and one of only three complete copies, recorded at auction in over fifty years LEONARDO’S MATHEMATICIAN Luca Pacioli’s life and career perfectly positioned him as the creator of the Renaissance’s most important mathematics book: he was a teacher, traveler, scholar, and—most importantly—a friend and collaborator of the most respected artistic and scholarly luminaries of the period. Born in Sansepolcro around 1445, Pacioli came of age within the sphere of influence of Florence’s humanism. He was raised by a local merchant family, where he would have been trained in basic trade arithmetic. Sansepolcro was also the birthplace and home of the great painter and mathematician Piero della Francesca. Piero mentored Pacioli, depicting his young friend in two paintings; in turn, the Somma includes Piero’s uncredited work on perspective and other topics—a fact which Vasari censures in his Lives of the Artists. While still a youth, Pacioli traveled to Venice to tutor the sons of a local merchant in abbaco: the day-to-day mathematics used by the city’s businessmen and traders. This may have been where he first encountered double-entry bookkeeping. His next stop was Rome, where he became a friend and confidant of the great humanist polymath Leon Battista Alberti. Alberti was at the time a Papal secretary and connected Pacioli to the Catholic hierarchy in that city. The young math tutor began to study theology, eventually becoming a Franciscan friar. Alberti must have been a powerful mentor to the young Pacioli—an accomplished Renaissance thinker, but also, like Pacioli, not of high birth. While Alberti’s achievements were across diverse fields, from architecture to cryptography, it was mathematics that was central to how he understood the world—a view he clearly transmitted to Pacioli. In the dedication of the Somma , he writes that “nothing in creation will be found constituted but as number, weight, and measure.” After Alberti’s death in 1472, Pacioli left Rome to begin a career as a teacher, lecturing at universities in Perugia, Pisa, and Bologna. In the 1490s, Pacioli returned to the town of his birth. He spent his time finishing his long-awaited book: a treatise containing all the math there was to know. His style and scope were informed by a didactic method honed from decades of teaching young boys, his direct observation of merchant practices, and his intimacy with some of the most brilliant minds (and important manuscripts) of his age. That book was the Somma, completed under the patronage of Guidobaldo da Montefeltro, Duke of Urbino, whose excellent library was an important resource and to whom the book is dedicated. Its publication earned Pacioli fame—and also the attention of another luminary of the Italian Renaissance: Leonardo da Vinci. Two years after its publication, Pacioli was invited to the court of Ludovico Sforza in Milan, where Leonardo was wo