PETITES HEURES OF CHARLES VIII, use of Paris, in Latin, illuminated manuscript on vellum [Paris, 1490s] 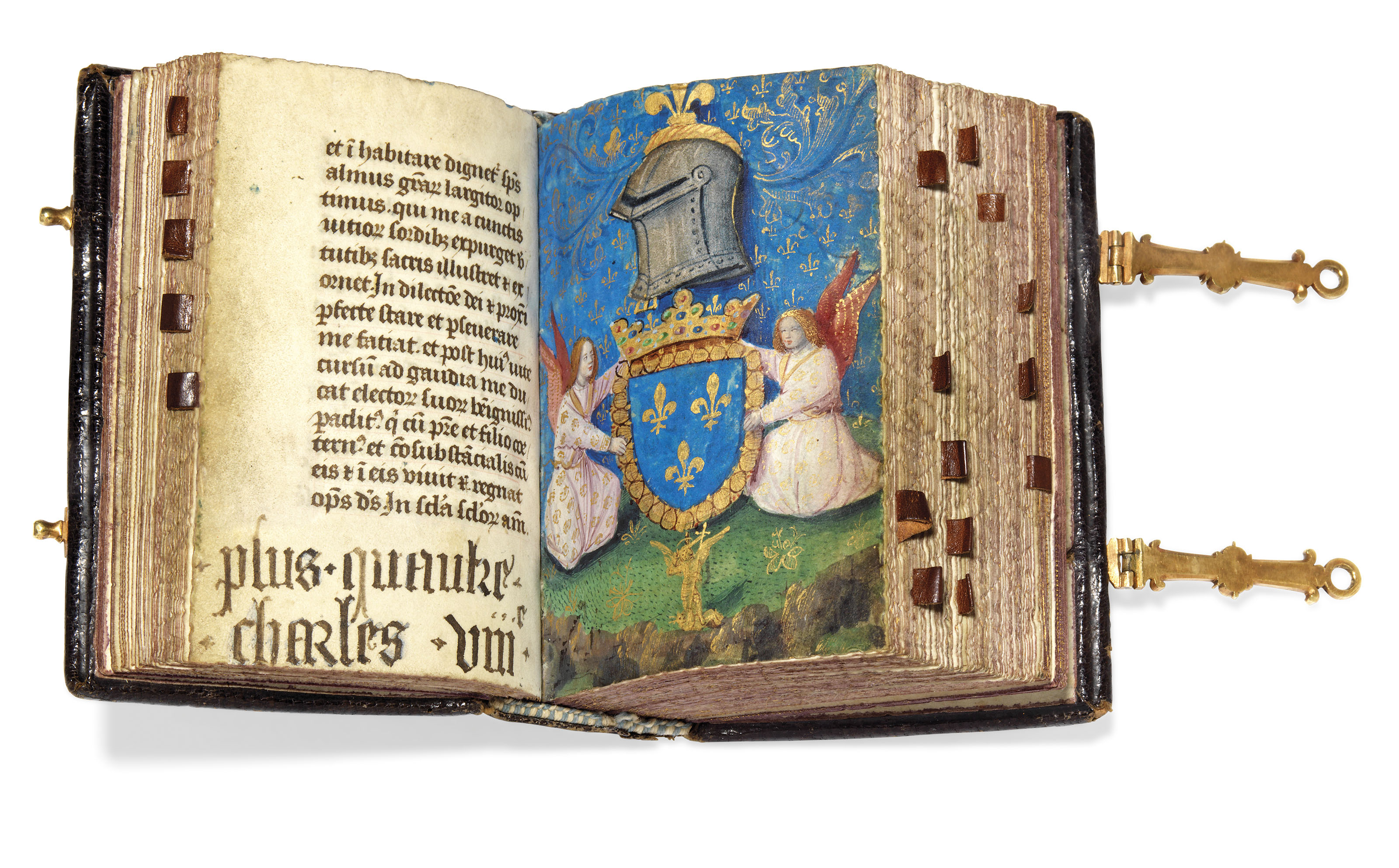 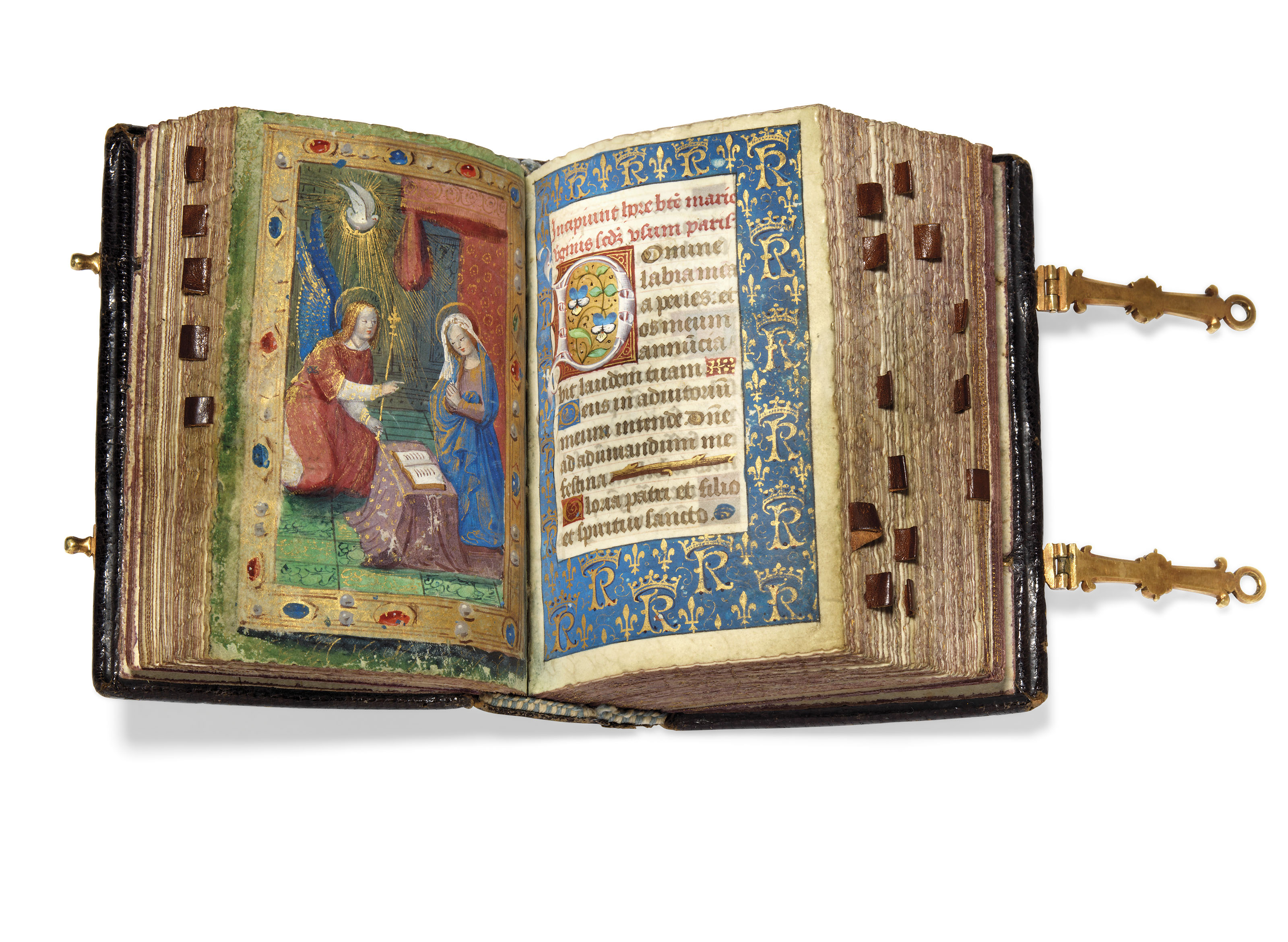 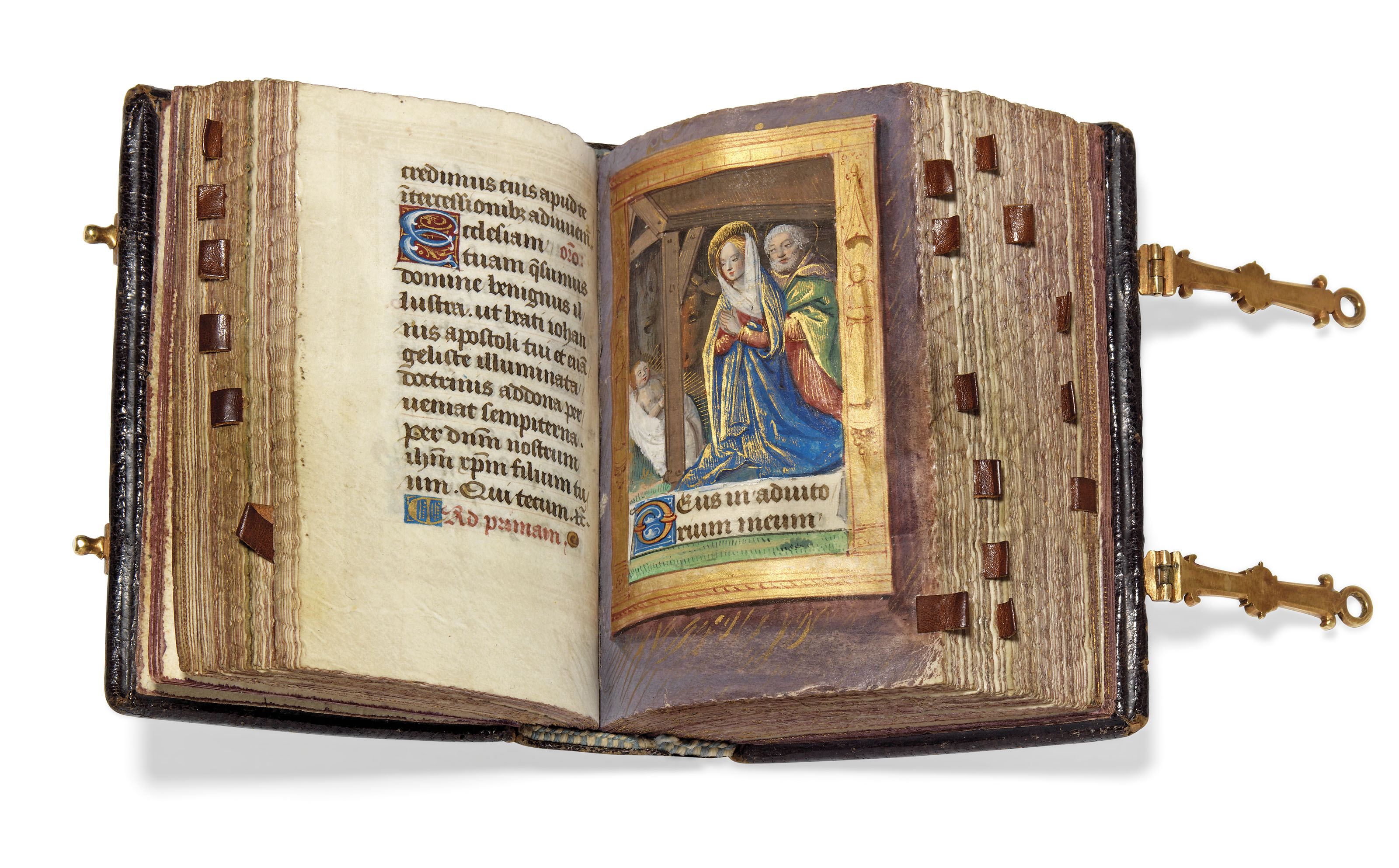 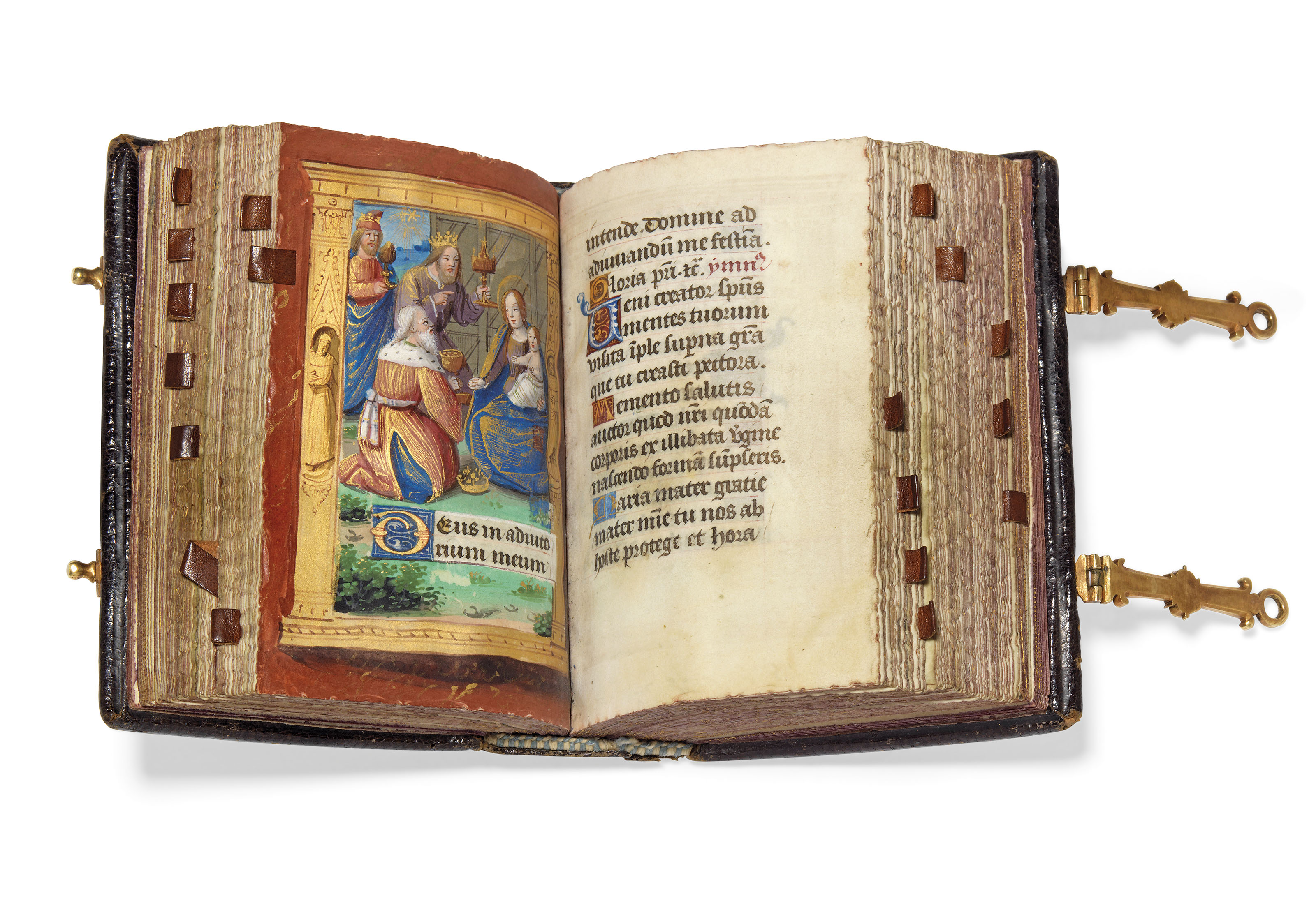 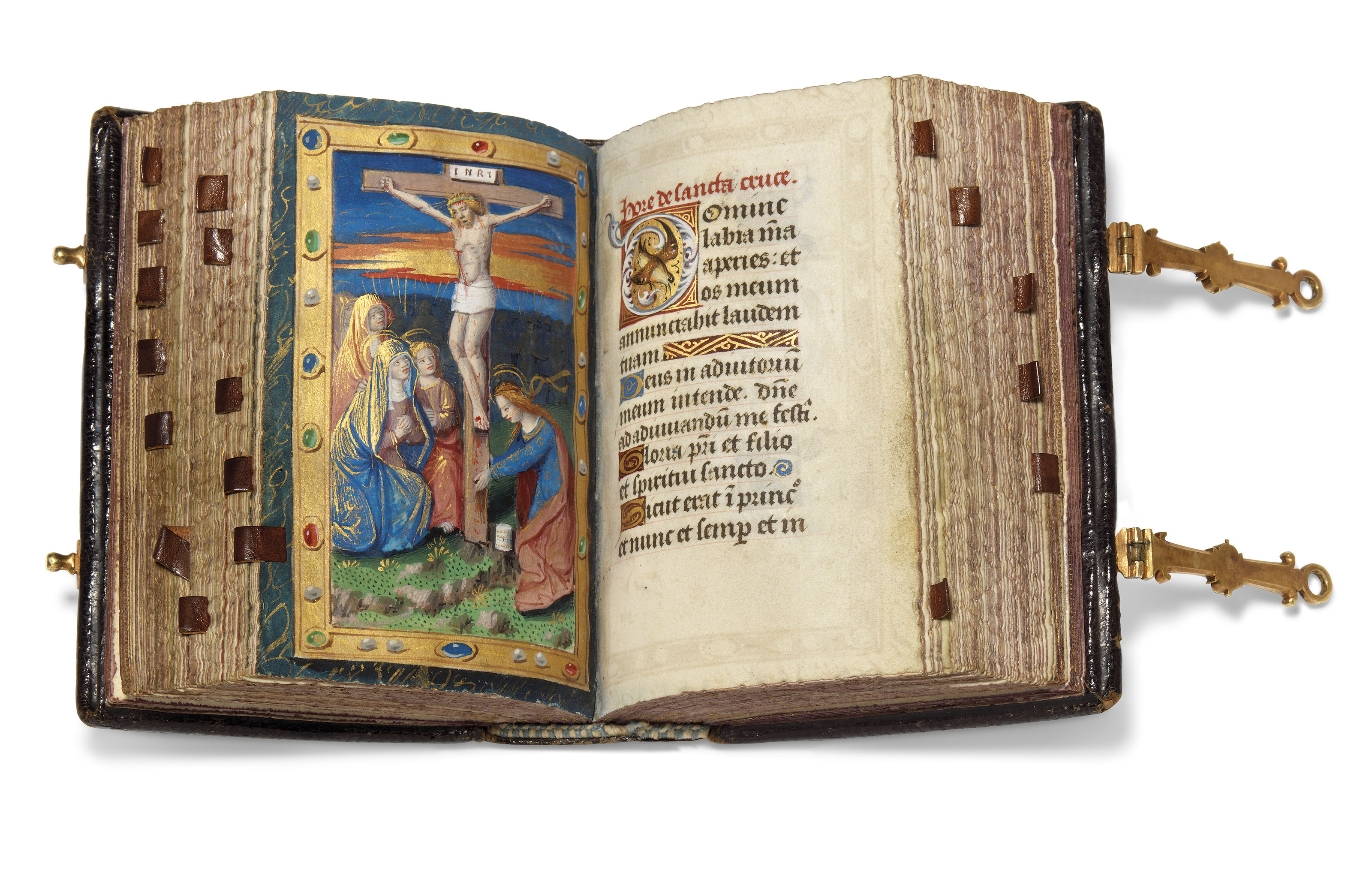 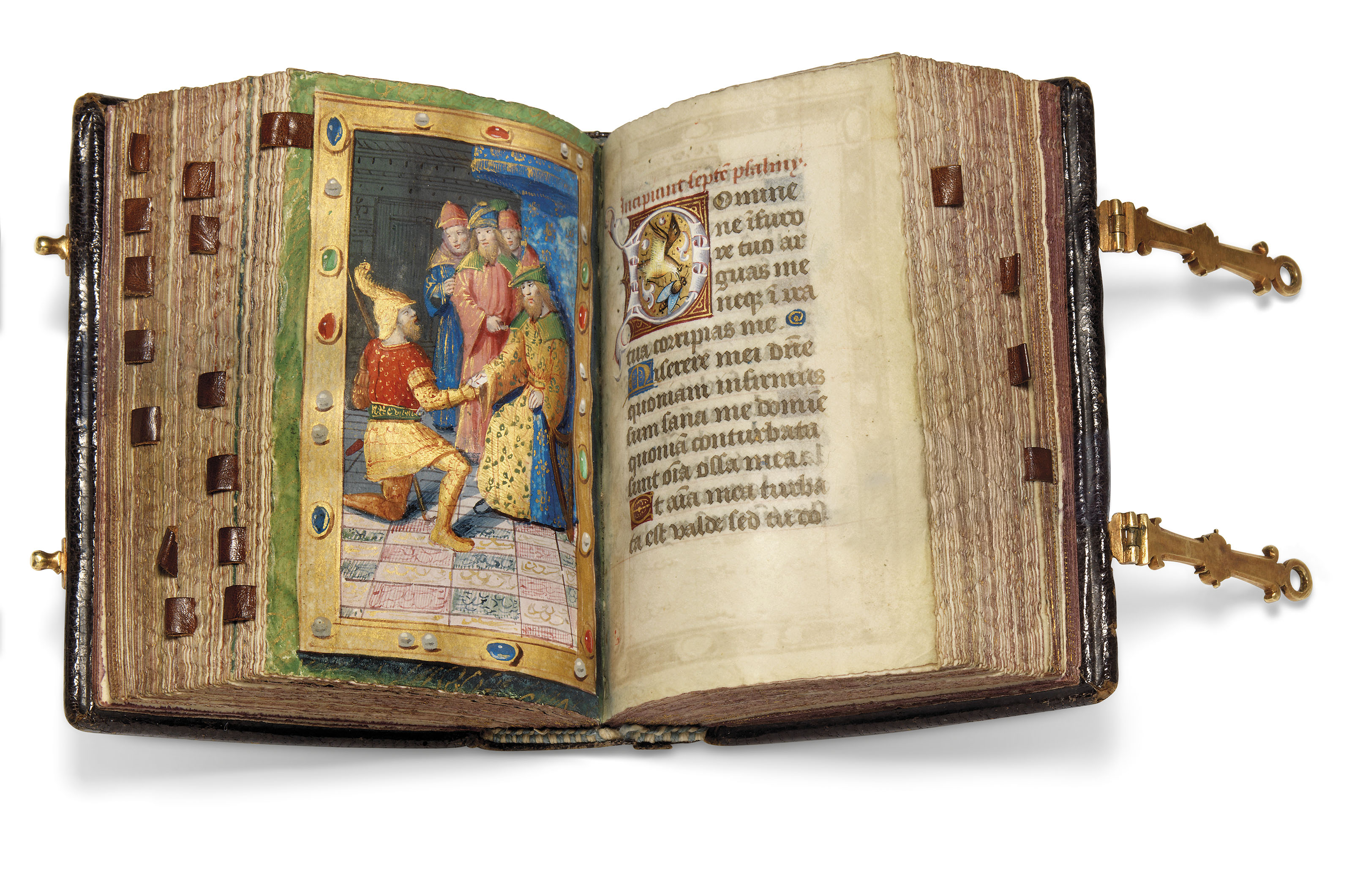 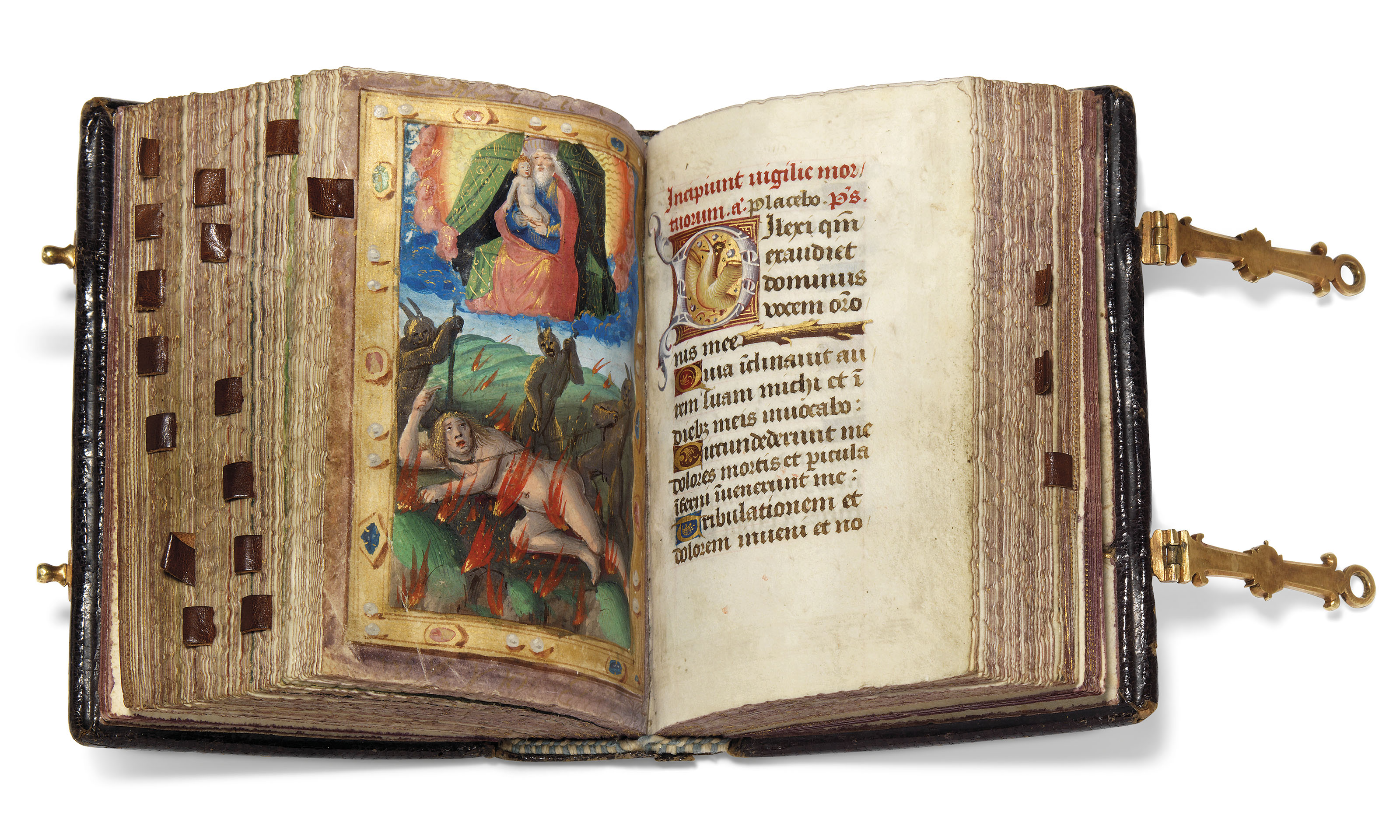 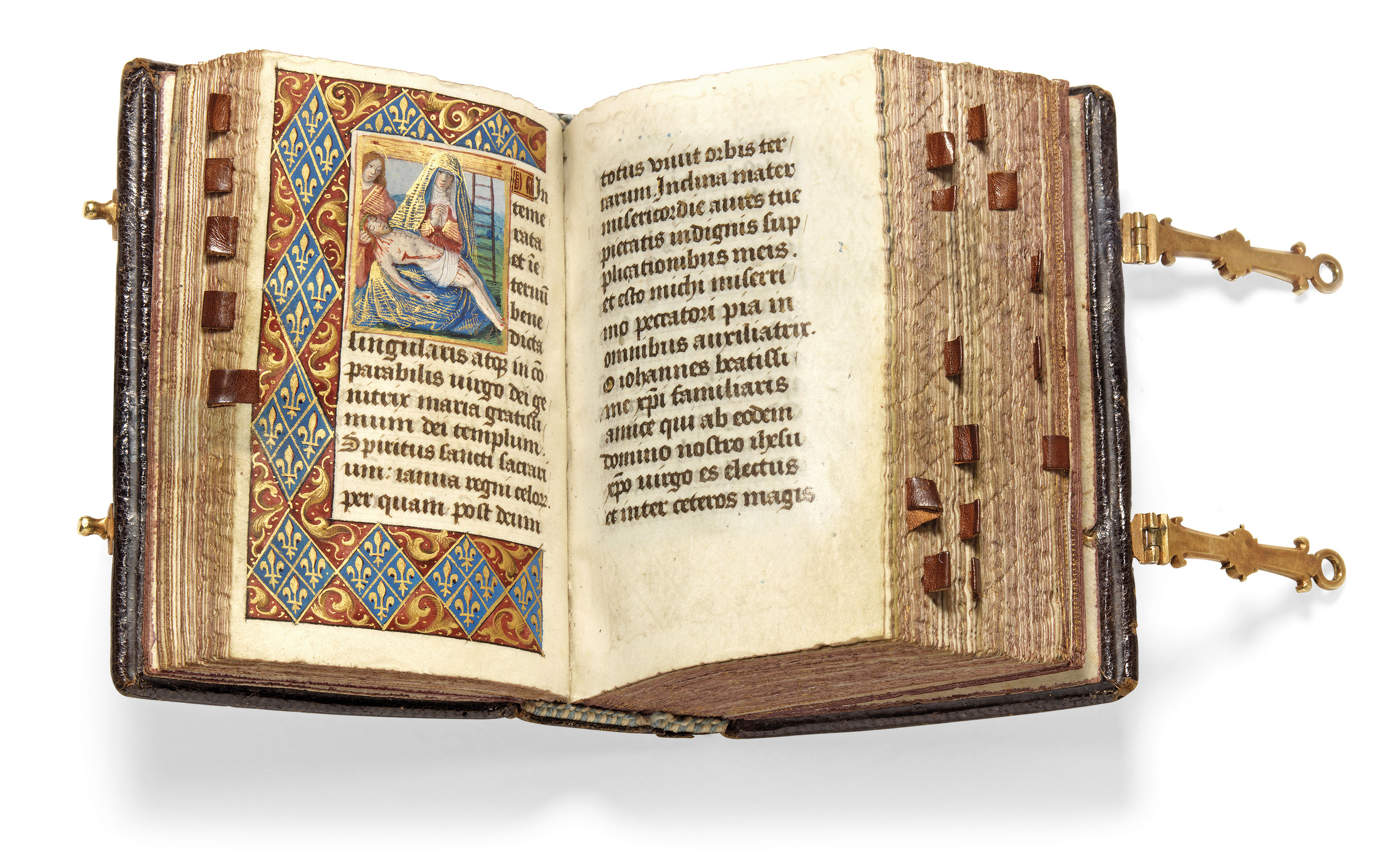 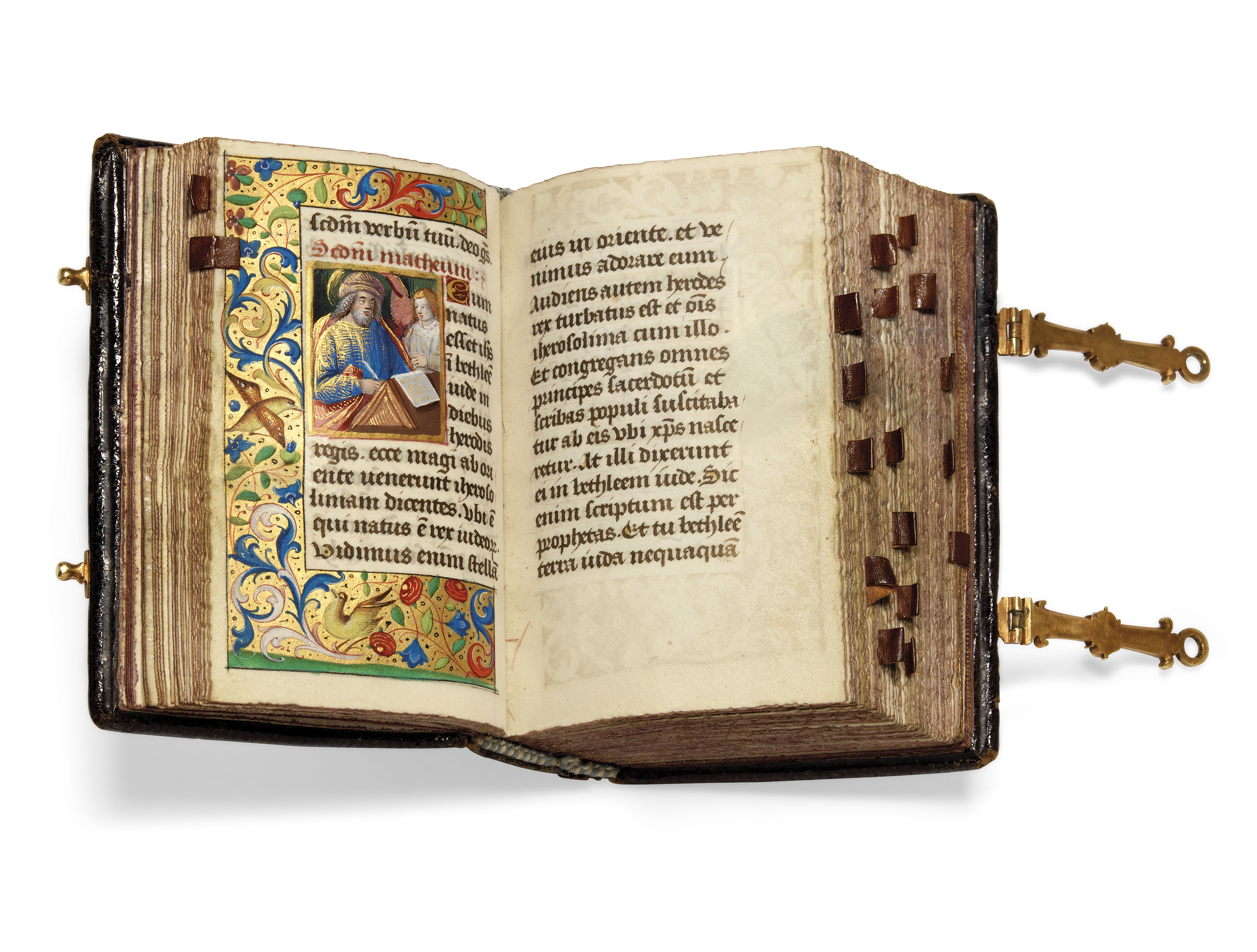 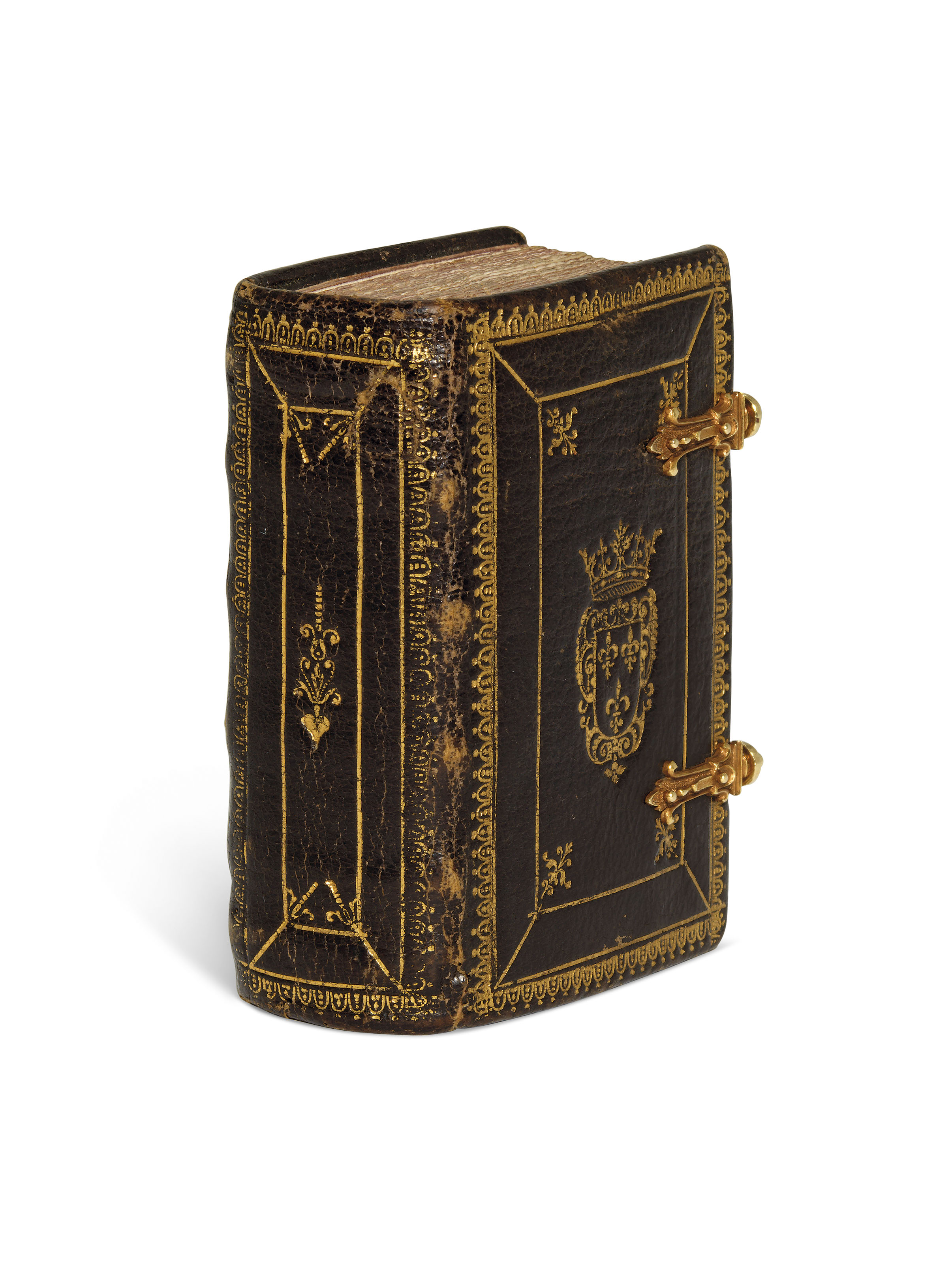 PETITES HEURES OF CHARLES VIII, use of Paris, in Latin, illuminated manuscript on vellum [Paris, 1490s] Owned by a King: an exquisite Hours illuminated by the Master of the Chronique Scandaleuse. 73 x 47mm. vi + 205 + xii leaves. 1-4 8 , 5 3 (of 4, iv a cancelled blank), 6-13 8 ,14 2 , 15-27 8 , complete. 14 lines, ruled space: 45 x 27mm, rubrics in red, one- to two-line illuminated initials in white, red, blue and liquid gold throughout. 3 small miniatures for Suffrages, a further 7 small miniatures accompanied by 3-sided borders of acanthus and flowers on shaped fields including one with diapers with fleur-de-lis, and 13 large miniatures within full-page borders of fictive golden frames with jewels or sculpture, and one with the crowned ‘k’ monogram for Charles VIII, one full-page painting of the crowned royal arms of France, page-edges gilt and gauffered with diapered fleur-de-lis, leather tabs at pages with miniatures (occasional tiny chips in paint of the coloured background at edges of miniature frames, very faint offsetting from fictive golden frames onto facing rectos). ?17th-century panelled brown morocco tooled in gold, covers with central cartouche with the crowned arms of France, 19th-century gilt clasps and catches (slight scuffing at joints). Provenance: (1) Charles VIII, King of France (r.1483-1498): his achievement of arms on f.36, the crowned shield with France moderne surrounded by the collar of the Order of St Michel and supported by two angels, facing an inscription in the lower border of f.35v with Charles’s motto and name ‘plus quautre charles VIII’, the following opening with a border where the repeated monogram of a crowned ‘k’, for karolus , is placed against a blue ground. The armorial page recalls the frontispiece that Charles VIII had added to the manuscript of La Vie et miracles de monseigneur Saint Louis (Paris, BnF Fr.2829), after it was presented to him by the Duchess of Bourbon. The full-page frontispiece portrays Charles being presented to the court of heaven by his sainted predecessors, Louis IX and Charlemagne, the two male saints singled out for illustration in the Suffrages of the present Book of Hours. In these Petites Heures , however, the angel supporters are clearly painted by the author of the remainder of the miniatures and the page is not a later addition. The motto Plus quautre and the royal arms surmounted by this open crown were used by Charles VIII after his marriage to Anne of Brittany in 1491 and are paired with Anne’s arms in the sculptural decoration of the château of Amboise, Charles’s birthplace, a favoured residence and the site of his death. Whereas this Petites Heures is an intimate devotional book for personal use, Charles’s commissions, gifts and other acquisitions made a significant addition to the French Royal Library. It is documented that during his 1495 campaign into Italy to reclaim the Crown of Naples, Charles had 43 tons of art works transported back to France: it included 1140 volumes from the library of the Aragon Kings of Naples. (2) Drouot, 4 December 2000 (Etude Laurin, Guilloux, Buffetaud, MM Courvoisier, Laucournet). Content : Prayer, Deus propicius esto michi [ … ] ff.i verso-4; Calendar ff.5-16; Gospel sequences ff.17-25; Passion according to John ff.25v-27; Obsecro te ff.27v-32; O intemerata ff.32v-35v; Royal arms of France f.36; Office of the Virgin, use of Paris ff.36v-101v; Hours of the Cross ff.102v-110: Hours of the Holy Spirit ff.110v-117; Seven Penitential Psalms ff.117v-140v; Office of the Dead ff.141v-189v; Suffrages ff.190-202v; prayer O desolatorum co[n]solator ff.203-205 a near-contemporary addition. Illumination: As befits its royal provenance this charming little Hours is one of the most delicate works illuminated by the Master of the Chronique Scandaleuse . The precision, subtlety and finesse of its execution equals that of the Master's work in Pierre Sala's Enigmes or Emblemes et devises d'Amour (London, BL, Stowe 955). 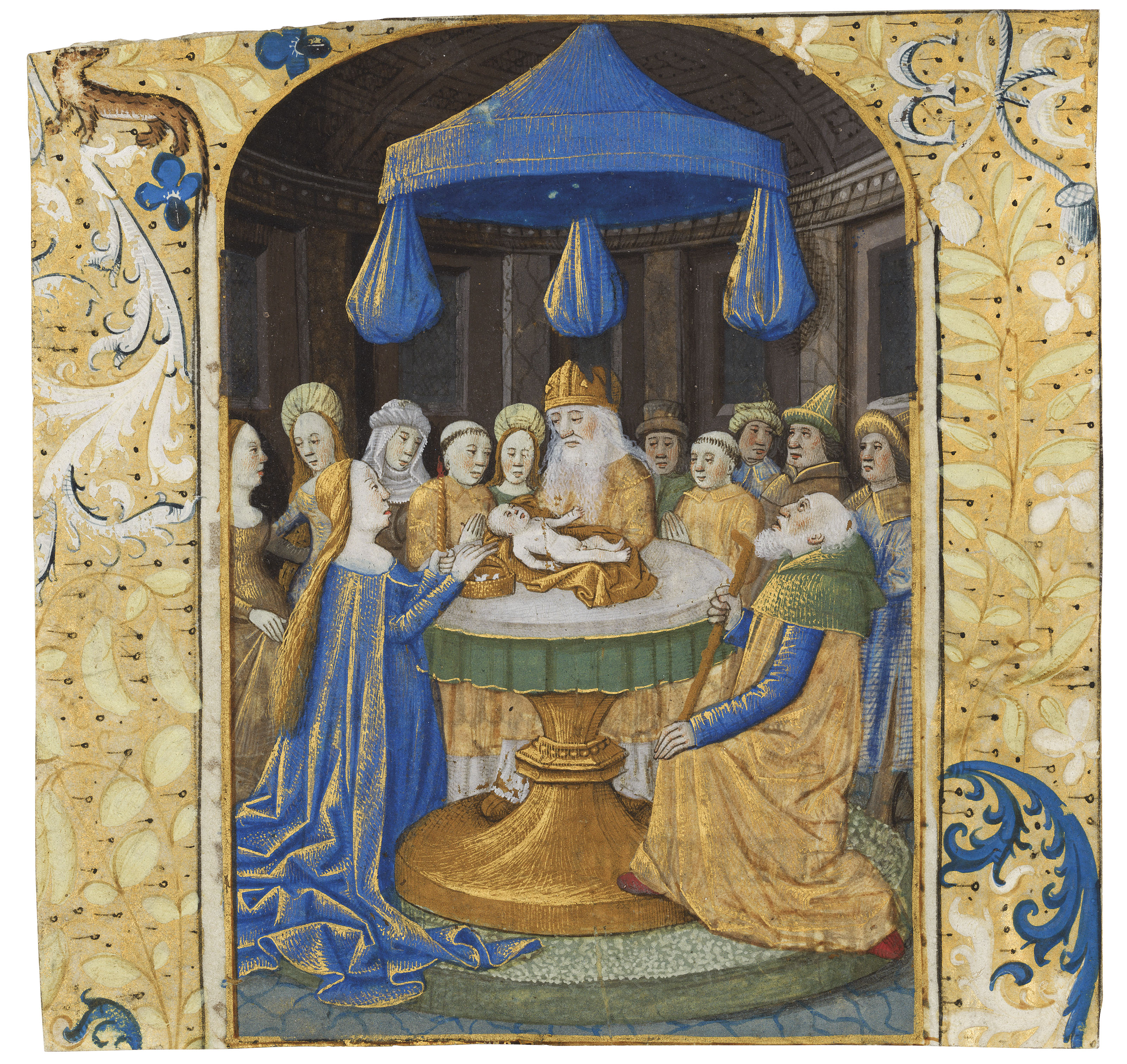 THE PRESENTATION IN THE TEMPLE, miniatur 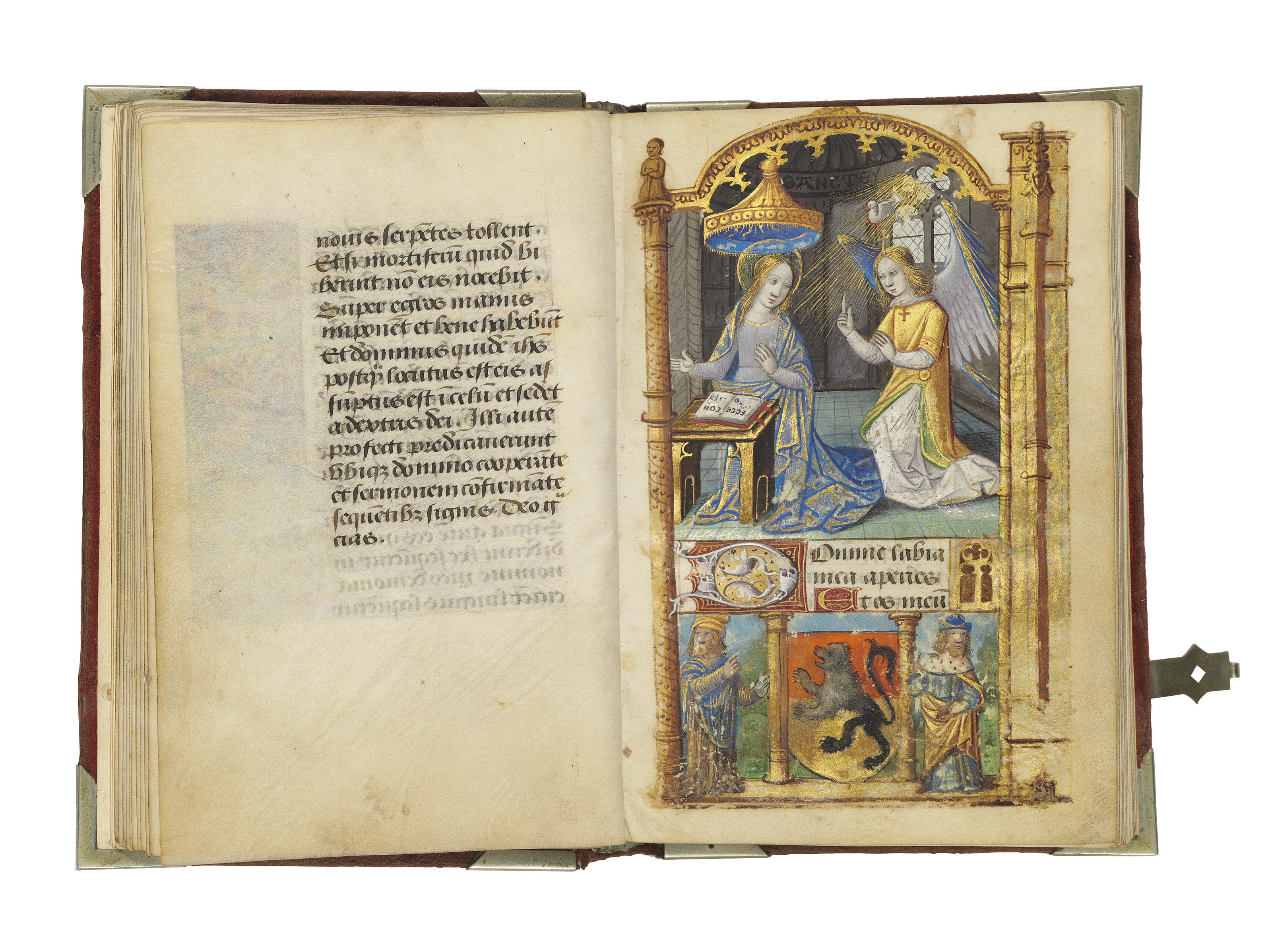 BOOK OF HOURS, use of Paris, in Latin, i 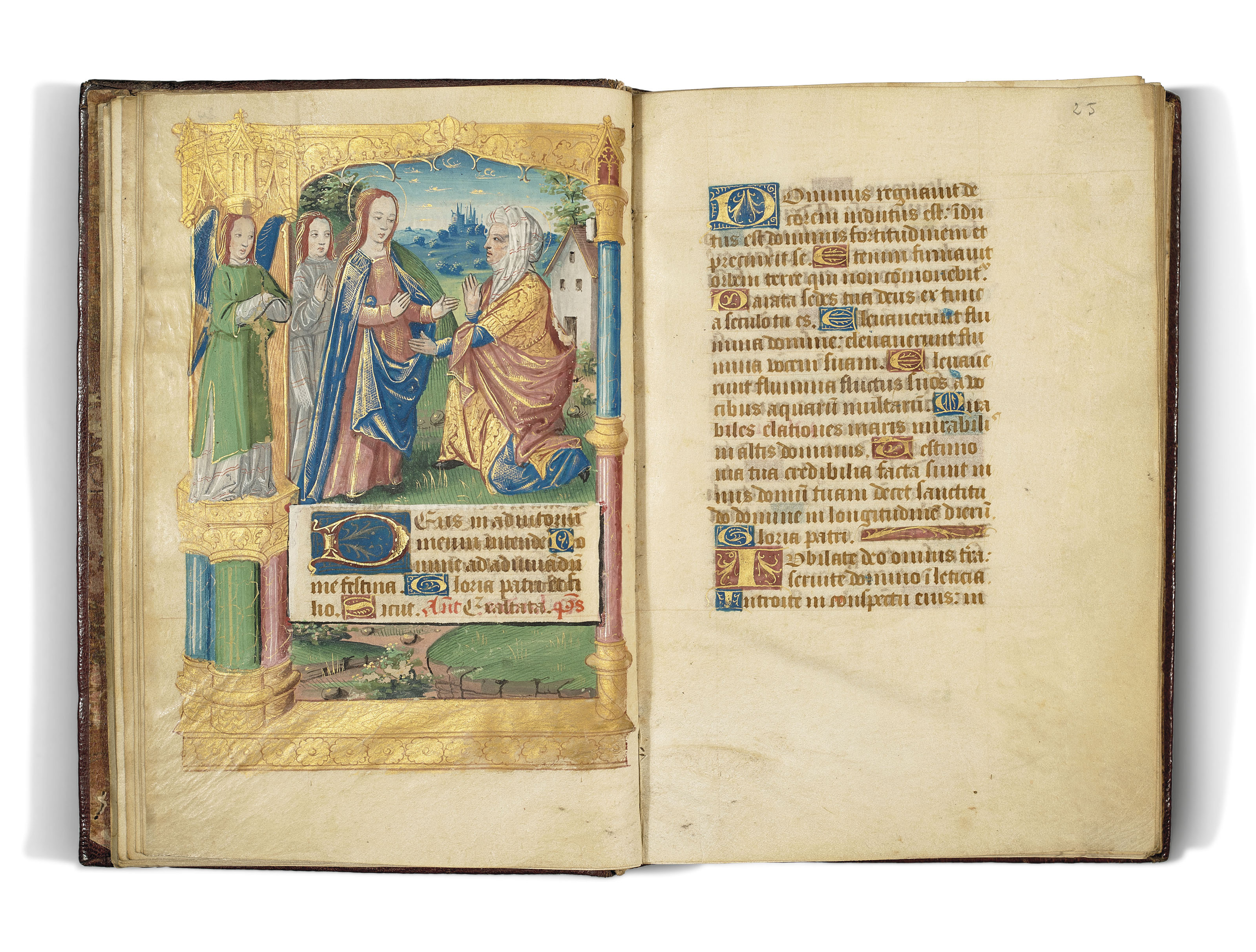 BOOK OF HOURS, use of Saint-André de Bor 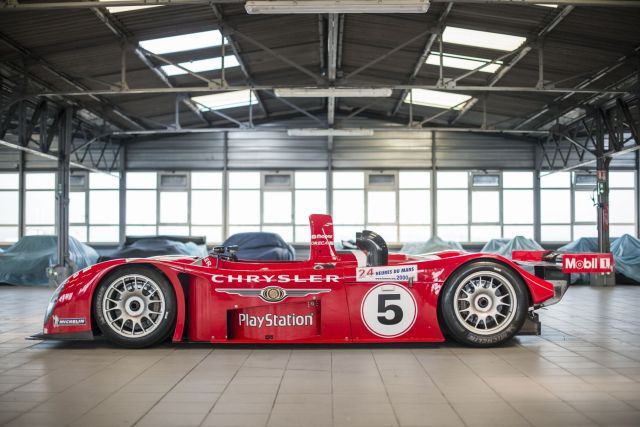