PIRANESI, Francesco (1748-1810) and Giovanni Battista PIRANESI (1720-1778). [Plan and views of the Villa Hadrian, Rome: 1768-70-74-76-77 and 1781. Plan on six joined sheets (815 x 3110cm) and 10 broadsheets (525 x 772mm). Etched plan entitled Pianta delle fabriche esistenti nella Villa Adriana begun by Giovanno Battista and finished by Franceso Piranesi, with engraved integral legend along lower edge (the first sheet with legend neatly attached, probably by the publisher), dedication cartouche to Stanislas II Augustus, King of Poland (1732-1798), the etched oblong plates by Giovanni Battista Piranesi (in order as bound: Hind 134I, 90II, 112I, 132II, 133I, 131I, 113I, 94II, 85II, and 93I) have early stab-holes along extreme left margins still visible in some plates. (Some very light soiling). Late 18th-century calf-backed boards (extremities rubbed, covers scuffed). Giovanni Battista died in November 1778 and Francesco inherited his father's printing and printselling business. Francesco had been trained as an engraver by his father and his small contribution to some plates has been identified by scholars. Whilst the plates were solely the work of Giovanni Battista, it seems likely that the plan of the villa was begun by the father and after his death was finished by the son (see Jonathan Scott, Piranesi . London: 1975, p.254). The views of Hadrian's villa were originally part of Piranesi's Vedute di Roma . The majority of these plates are in Hind's first state and date from 1768 to 1777. The watermarks correspond to Robison's watermark numbers 39 and 58, and are similar to numbers 35-40. This set was most likely put together consciously by or for a client with a particular interest in the Villa Hadrian, and such a conscious compilation of Piranesi prints relating to the Villa Hadrian is apparently unrecorded. Focillon pp.349-351; Hind pp.62-73; Robison pp.222-227. 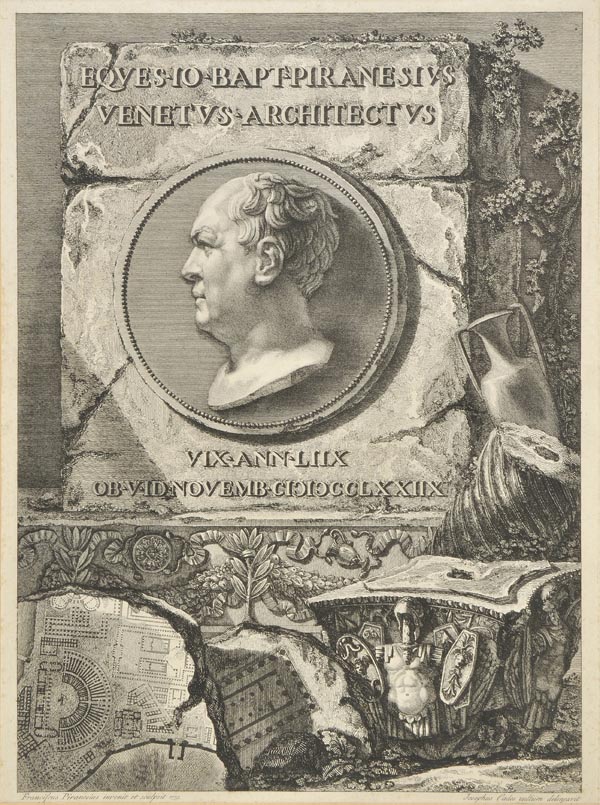