PROPERTY FROM A PRIVATE COLLECTION, CALIFORNIA Harry Callahan Eleanor, Chicago circa 1949 Gelatin silver print, printed 1970s. 7 7/8 x 9 3/4 in. (20 x 24.8 cm). Signed in pencil in the margin.
Provenance Pace/MacGill Gallery, New York Literature Cox, Harry Callahan: Eleanor, pl. 29; Greenough, Harry Callahan, p. 83 for a variant; Szarkowski, Callahan, p. 99 for a variant Catalogue Essay The role of the muse has undergone multiple permutations across the Ages, as seen in Greek goddesses circumventing amphoras while dancing and strumming; Renaissance courtesans posing seductively amidst sumptuous settings; and modern-day beauties revered in popular music. Nonetheless, the recurring theme underlying the many manifestations has been the wealth of inspiration provided by the muse, sparking imagination and effortlessly encouraging furtive creativity on the part of the inspired, normally an unshakable devotee who relishes at the mere sight of his or her muse. Such was the dynamic between Harry Callahan and his wife, Eleanor.In discussion of his own body of work, Callahan has noted that “it’s the subject matter that counts. I’m interested in revealing the subject in a new way to intensify it. A photo is able to capture a moment that people can’t always see.” One could argue, therefore, that it was the search for the invisible moment, one which only revealed itself in the final, photographic product that lead Callahan to tirelessly amass an extensive body of work of Eleanor, as exemplified by the following group of works.Callahan has stated that he had photographed his muse “in an endless number of ways,” while experimenting with a number of methods. Eleanor, Detroit, 1942 (Lot 69), the earliest image in the group, was taken a mere year after Callahan met Ansel Adams for the Ÿrst time at the Detroit Photo Guild, an experience that Callahan later declared as one that had “completely set me free.” Adams encouraged the budding photographers to utilize the strengths of the camera: objectivity, precision and clarity in details to their advantage, all of which can be seen in the aforementioned image. Tonality and clarity in the double exposure of Eleanor and the weeds take precedence over subject matter and narrative. Similarly, in Eleanor, Chicago, 1947 (Lot 77), taken a few years after, Callahan captured an intimate juncture of Eleanor’s limbs, that, while abstractive, still preserved a natural and organic form, resembling a majestic tree in the midst of winter. The indelible connection between Eleanor and nature is also beautifully captured in Eleanor, Chicago, 1954 (Lot 71). Much like the double exposure in the aforementioned image taken over a decade earlier, Callahan’s seamless synthesis of Eleanor and nature is lovingly presented. Eleanor’s unmistakable silhouette is carved out of grass, and contrasted by the cascading blinds emitting thin strips of glowing light behind. A similar relationship between Eleanor and nature is further evident in Eleanor, Chicago, 1949 (Lot 80), and Eleanor, Chicago, 1952 (Lot 73), all revering the umbilical connection between the woman Callahan loved, and the landscapes he enjoyed photographing.Examining the body of work in which Eleanor is dutifully portrayed, it seems that for Callahan, photographing Eleanor was a means of exploring their relationship, reflecting on their deep trust, respect and dignity for one another. Eleanor is not a mere vessel to explore the camera as a device, but on the contrary: the camera became a vessel for Callahan to depict the deepening of his love for his wife. In Eleanor, Chicago, 1952 (Lot 72), and Eleanor, Chicago, 1956 (Lot 79), despite having her back towards the camera, Eleanor is still readily identifiable through the adoring eye intent on capturing the soft light, the gentle curves, and the body Callahan loved so much.The strength of the images is derived from the collective narrative, for Callahan wanted it to stand as “…a continuous piece of life. It will show me as a young person and as an old man.” It is through Callahan’s images of Eleanor, in fact, that we learn as much about him as photographer and husband as we do about her as muse and wife. Acco 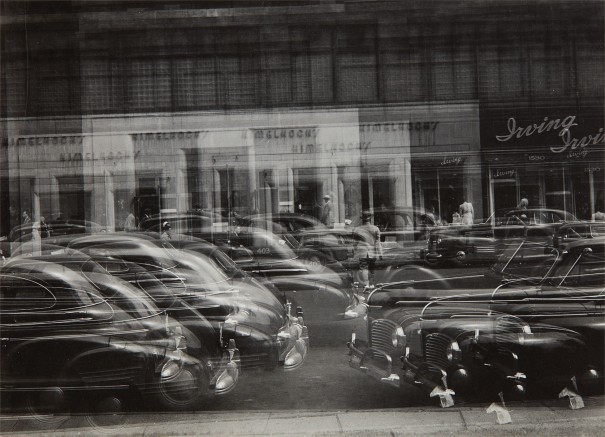