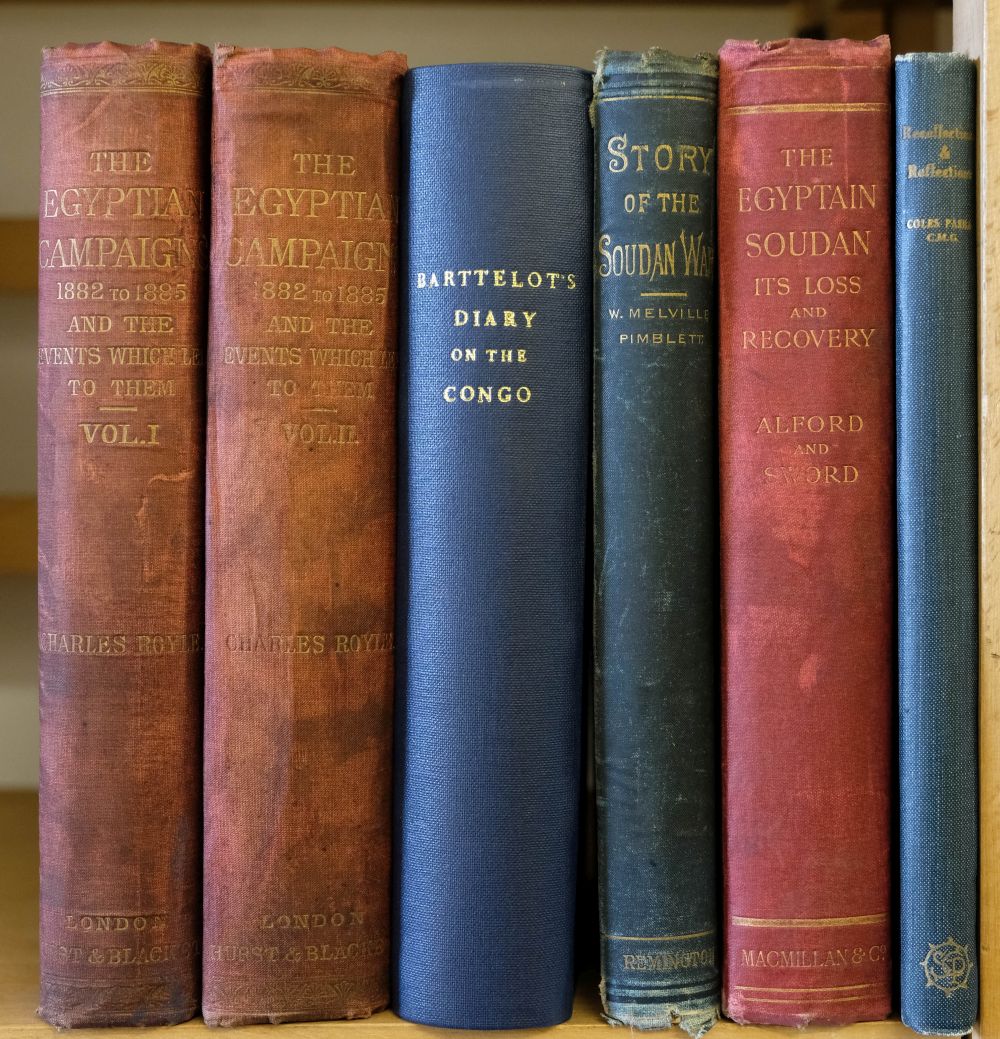 Royle (Charles). The Egyptian Campaigns, 1882 to 1885, and the events which led to them, 2 volumes, 1st edition, Hurst and Blackett, 1886, 3 maps, including 2 folding, to first volume, and one folding map and 6 map illustrations to text to second volume, contemporary ownership signature of J.F.M. Prinsep to half title of each volume, some marks and minor damp staining to margins of front and rear endpapers, original cloth gilt, rubbed and some marks and spines lightly faded, second volume with some restoration to rear inner hinge, together with Barttelot (Walter George). The Life of Edmund Musgrave Barttelot, Captain and Brevet-Major Royal Fusiliers, Commander of the Rear Column of the Emin Pasha Relief Expedition, being an account of his services for the relief of Kandahar, of Gordon, and of Emin, from his letters and diary, 1st edition, Richard Bentley and Son, 1890, monochrome illustrations, including two folding maps at rear, recent blue cloth, spine lettered in gilt, minor damp marking to lower edges of covers and endpapers, 8vo, plus three others related: Story of the Soudan War. From the rise of the revolt July, 1881, to the fall of Khartoum and death of Gordon, Jan. 1885, by W. Melville Pimblett, 1885, The Egyptian Soudan, its loss and recovery, including I.-A Rapid Sketch of the History of the Soudan, II.-A Narrative of the Dongola Expedition, 1896, III.-A Full Account of the Nile Expeditions, 1897-8, by Henry S.L. Alford, and W. Dennistoun Sword, 1898, and Recollections and Reflections by Coles Pasha, C.M.G., late Insepctor-General of Prisons, Egypt, St. Catherine Press, circa 1918, all original cloth, the first two titles with soiling and some damp marking to covers, slightly affecting preliminary leaves, all 8vo (Qty: 6)

The collection of Medals formed by the L

ARCHER (THOMAS) The War in Egypt and the