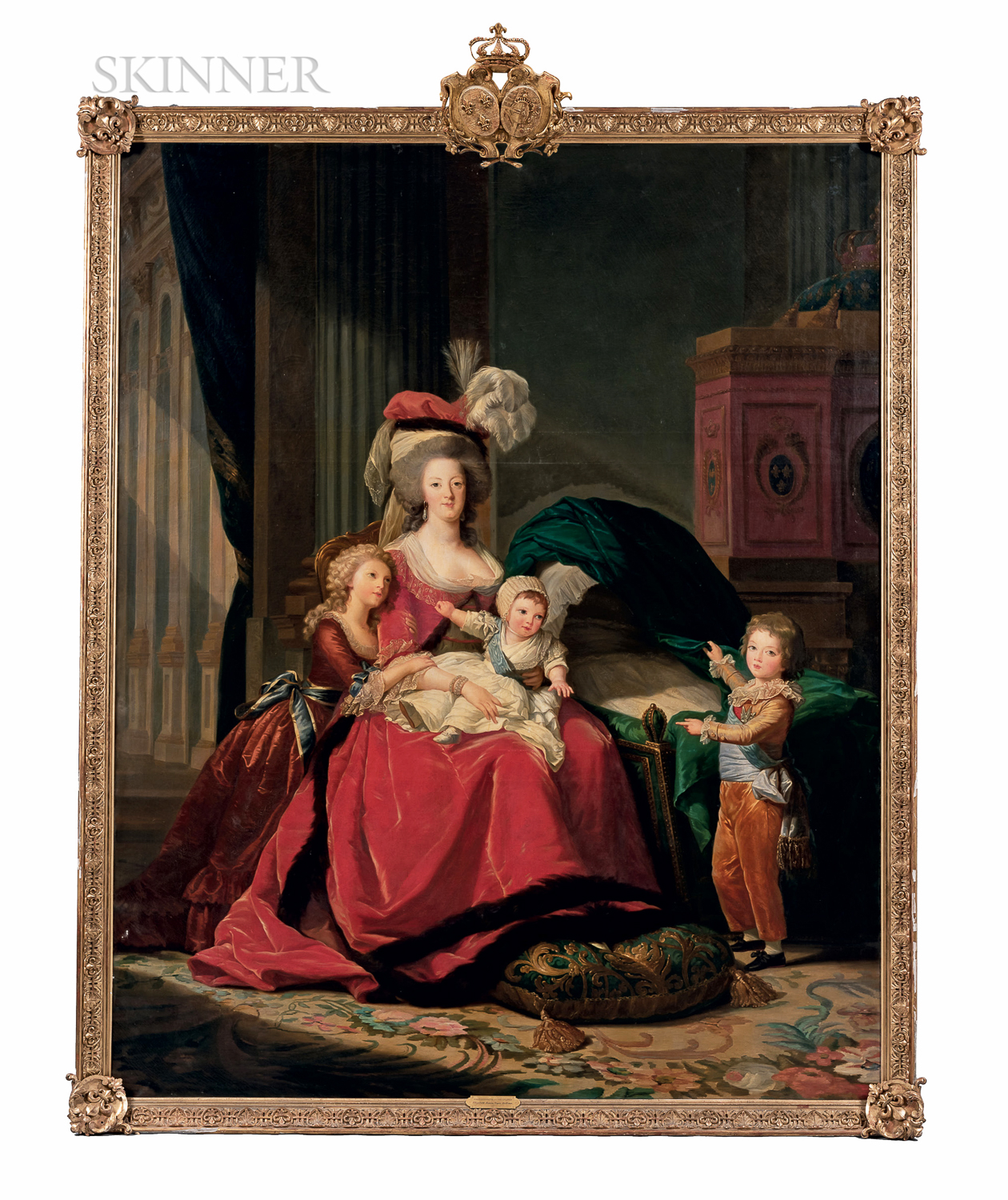 Studio of Elisabeth Louise Vigée Le Brun (French, 1755-1842) Marie-Antoinette and her Children Unsigned, identified and dated to 1837 on a presentation plaque. Oil on canvas, 108 1/4 x 86 1/4 in. (275.0 x 219.1 cm), in a period frame with corner fleur-de-lis motifs topped with a central crest with royal coat of arms. Condition: Craquelure, stretcher bar marks, extremely minor retouch to shadows, two small punctures to upper center near edge, canvas rippling to the u.r. corner. N.B. This copy of the famous portrait of Marie-Antoinette and her children was commissioned in the early years of the 19th century from the Studio of Vigée Le Brun by the Irigoyen Family, Spanish aristocrats and close associates of the French royals. It recreates at the same large scale one of Vigée Le Brun's most renowned works (of 1787), a national treasure held in the collection at Versailles. The Versailles painting, the largest ever created by Vigée Le Brun and completed over two years, was commissioned by the Office of Royal Households specifically to restore the image of Marie-Antoinette, wife of Louis XVI, who had fallen dangerously out of favor with the French people for her frivolity and lavish spending. The life-size figures are shown in the Salon de la Paix at Versailles, illuminated by a beam of light coming through an open door from the Hall of Mirrors on the left. Vigée Le Brun posed the figures in a triangular arrangement, a convention employed frequently for depictions of The Holy Family, and the Dauphin lifts the drape over the cradle to show that it is empty, a somber reminder of the death of the family's fourth child. Marie-Antoinette sits at the center, her face solemn, expressive of her loss and her ongoing devotion to her children. Every detail was carefully considered, including the color of Marie-Antoinette's dress, to confirm her role as a dutiful mother and queen. Elisabeth Vigée Le Brun was the favorite artist of Marie-Antoinette and painted the Queen over 30 times. The two women, who were about the same age, enjoyed a friendly relationship, one that benefited the artist but also drove her into exile as the French Revolution approached. Vigée Le Brun was a very gifted portraitist at a young age, without the formal training afforded to her male peers, and was granted entry into the Académie Royale in 1783 by the direct appointment of Louis XVI, perhaps in appreciation for her pleasing portraits of the Queen. In 1789, fearing for her safety and that of her daughter, Vigée Le Brun fled France for Italy, traveling over the coming years to major European courts where she painted much sought-after likenesses of the aristocracy.