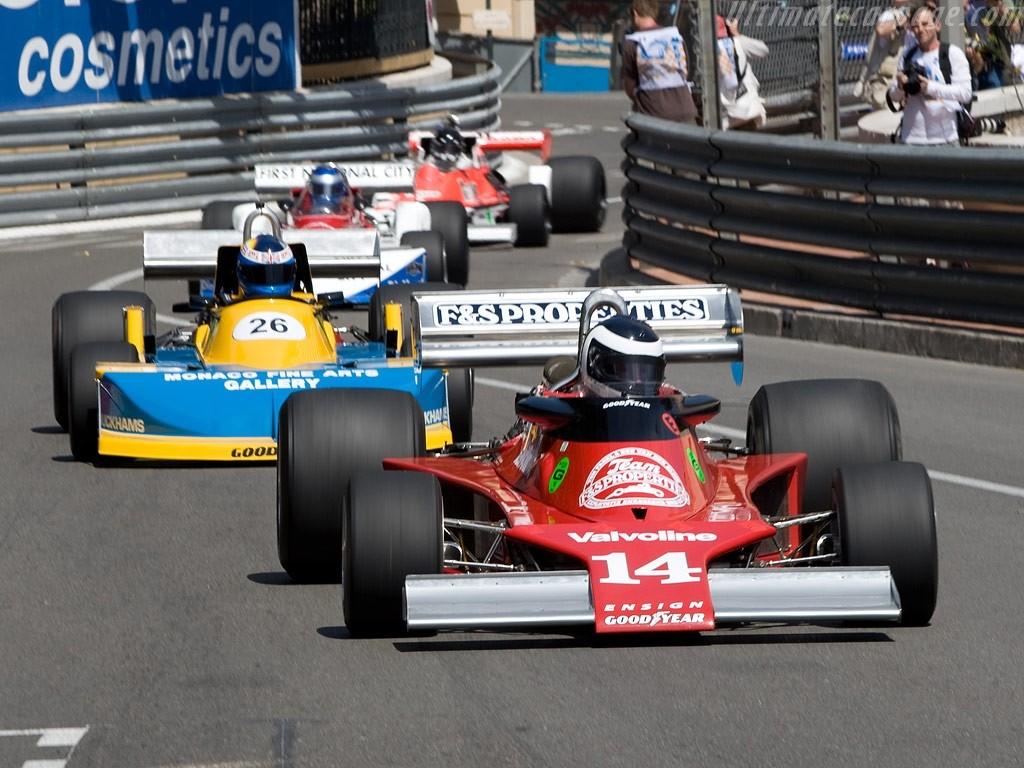 Walsall-based former Lotus sports and Formula 3 driver Morris Nunn became a respected racing car constructor in the early 1970s. He built Ensign Formula 3 cars before being approached by one of his customers, wealthy Leichtensteiner Rikki von Opel, to produce a Cosworth-engined, Hewland-transmission Formula 1 car for the 1973 racing season. The prototype Ensign N173 emerged as a neat and workmanlike customer car which made its debut in the 1973 French Grand Prix at the Ricard-Castellet circuit. Its chassis number was 'MN01'- launching the Ensign series which would survive as one of the lowest-budget Formula 1 operations until as late as 1982. Morris Nunn's little team survived an accident-prone 1976 season with drivers Chris Amon – ex-McLaren, Ferrari, Matra and Tyrrell – Larry Perkins, Patrick Neve, Roland Binder and ultimately Jacky Ickx campaigning the cars. Nunn proved completely indefatigable as he bounced back for 1977, rebuilding his cars and his team with sponsorship from Tissot Watches and Castrol Oil. A brand-new N177 chassis emerged under the individual chassis serial 'MN06', and new driver Clay Regazzoni – ex-Ferrari and BRM – drove it in the first six races of the new year, finishing sixth in Argentina. Hong Kong entrepreneur Teddy Yip entered an Ensign car during the season, and Jackie Ickx and Patrick Tambay also drove – Tambay showing distinct promise, while Regazzoni placed fifth in Italy and the United States, Tambay fifth in Canada. For the 1978 season Nunn had to do his best with his basically three-year old cars, using chassis MN06, MN07 and MN08. The chassis serial MN09 was then attached to this Jack Kallay/Mario Deliotti Aurora AFX Championship car while at Formula 1 World Championship level it was adopted for the works N179 car produced by Morris Nunn's little team for the 1979 season. That car was driven by Derek Daly in South Africa and at Long Beach and Monaco, while Patrick Gaillard took over for five GPs from the French event to the Dutch, after which Marc Surer drove in three late-season Grands Prix. Morris Nunn's subsequent Formula 1 Ensign designs comprised the N180 for 1980, N180B for 1981 and the N181 for 1982. The final car produced was serialled MN16 and it was campaigned by driver Roberto Guerrero. Morris Nunn subsequently transferred his attentions from Formula 1 to American Indycar competition, but his Ensign marque retained its reputation for having been a perennial underdog in Formula 1, an immensely brave effort campaigning very nicely-made cars always upon a shoestring budget. Just the kind of background heritage which makes MN09 as offered here such a perfect proposition for the aspiring Historic and Thoroughbred Formula 1 owner/driver today. This neat and good looking purebred Formula 1 car made its racing debut on August 28, 1978, as part of the British-based Jack Kallay/Mario Deliotti Aurora F1 team for movie stuntman Valentino Musetti to drive at the August Brands Hatch national Championship race meeting. This Ensign N177-style car was entered there as a replacement for the team's Cosworth GA-powered March 752 which had crashed heavily at the previous Aurora AFX Championship-qualifying round. In that Brands Hatch debut, Val Musetti finished sixth with the car, and subsequently took a good fourth place in it at the Thruxton Aurora AFX round on September 10 that year. It was sold subsequently to fellow British national Formula 1 owner/driver Mike Littlewood, who drove it in the Oulton Park open Formula 1 race on April 1, 1983, finishing fifth. It then won – again driven by Mike Littlewood – in an Historic event at Donington Park, won again at Donington the following year, and also recorded two second place finishes in Historic Formula 1 events – at Brands Hatch and Donington Park in 1983, plus a third place at Brands Hatch in June, 1984. Some evidence exists that the chassis of MN09 as above incorporated some of the works Ensign N176 monocoque structure MN05 which crashed at Watkin