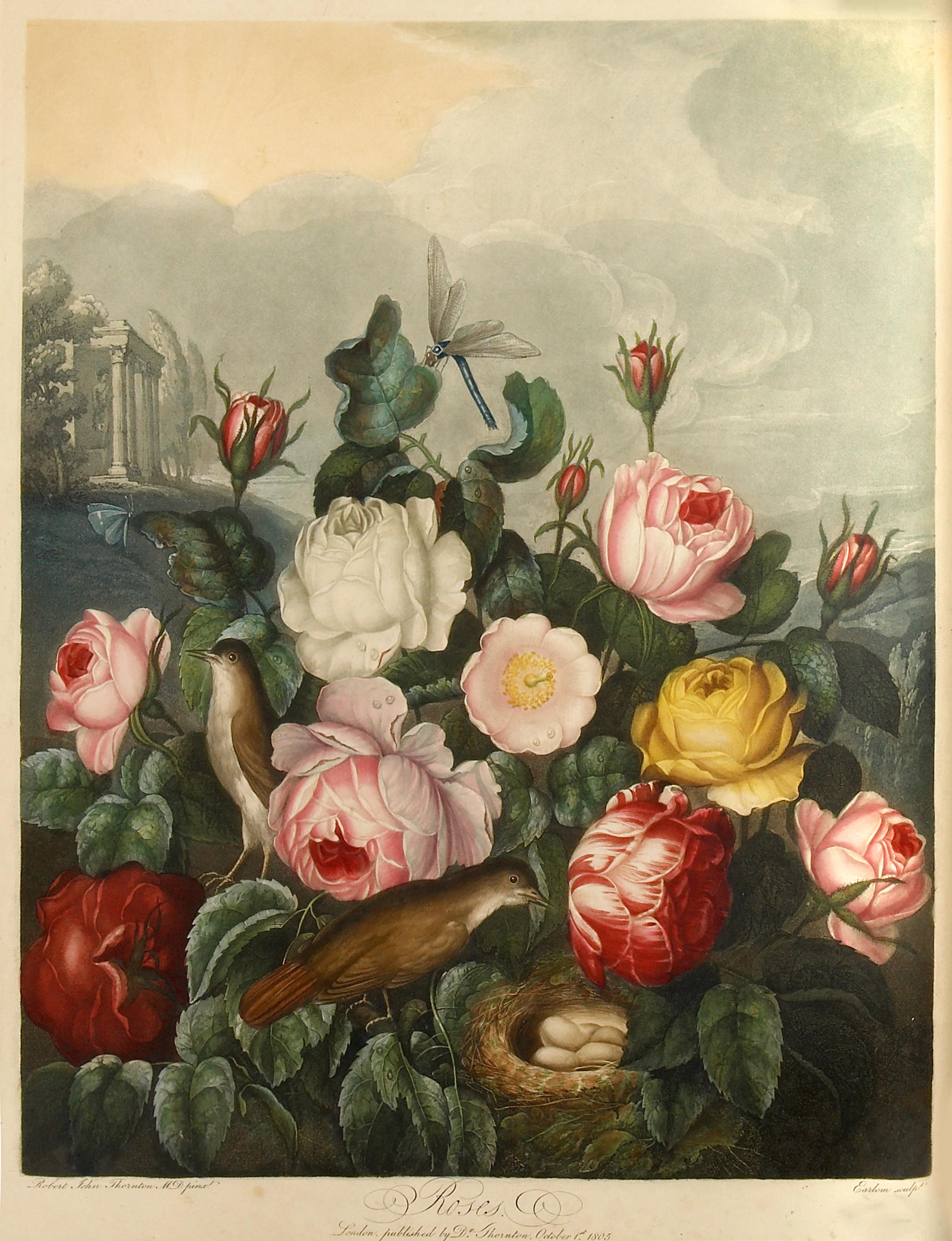 New Illustration of the Sexual System of Carolus von Linnaeus Comprehending... the Temple of Flora, or Garden of Nature. London: for the Publisher, by T. Bensley, [1799]-1807. 3 parts in one volume. Part 1: engraved half-title "A British Trophy..."; engraved portrait of Thornton by F. Bartolozzi after Russell; engraved additional title; engraved portrait of Linnaeus by H. Meyer after Hollman and Bartolozzi; engraved portrait of Queen Charlotte by Bartolozzi after W. Beechy; engraved dedication; 3 engraved tables; engraved part-title "The Prize Dissertation"; engraved plates of "The Universal Power of Love," portrait of Sir Thomas Millington, and "Farina of Flowers." Letterpress title and 28 text leaves (including dedication and part-title). Part 2: engraved part-title; mezzotint portrait of Linnaeus in Lapland dress by Dunkarton after Kingsbury; 2 engraved tables. 7 text leaves (including half-title). Part 3: engraved title on 2 sheets; engraved table of contents; engraved dedication on 2 sheets; engraved part-title; 3 plates: "Flora Dispensing her Favours on Earth" (aquatint and stipple engraved, hand-colored), and "Aesculapius, Flora, Ceres and Cupid..." and "Cupid Inspiring the Plants with Love" (color-printed stipple-engravings finished by hand); 28 mezzotint and/or aquatint engraved plates printed in colors and/or colored by hand. 76 text leaves (including part-title and title). Folio (570 x 440 mm). Period diced russia, covers with elaborate borders tooled in blind and gilt with multiple fillets, and repeated palmette, alpinia and fern tools, inner gilt dentelles with repeated mantlepiece-like devices, spines gilt in compartments, 2 lettered, the others with symmetrical arrangements of floral and foliate tools, dated 1807 at the foot, a.e.g. Occasional light offsetting, from plates to text in all but two or three cases; some very light toning, confined to text; one allegorical plate with ½-inch edge tear, another on a marginally smaller sheet, Cereus with a little smudging into caption area, one or two plates beginning to weaken at inner platemark; free endpapers creased and front split, covers detached, rubbed particularly at corners, spine rubbed, 1-inch chip to head and trace of a paper label near foot. Generally extremely attractive in unrestored, unsophisticated condition. FIRST EDITION OF THE GREATEST ENGLISH BOTANICAL BOOK, IN PERIOD BINDING."At the heart of the New Illustration was Thornton's scheme to produce a specifically British botanical publication of a magnificence to surpass all previous examples. Teams of master engravers and colorists, including Francesco Bartolozzi Richard Earlom and John Landseer used the full range of modern printing techniques to produce colored illustrations after paintings by such prominent artists as Sir William Beechey James Opie, Henry Raeburn John Russell Abraham Pether and his two favoured illustrators, Peter Henderson and Philip Reinagle" (ODNB). The elaborate "Roses" plate is after a painting by Thornton himself, excelling in art despite his training in medicine. The twenty-eight botanical illustrations are justifiably famed for their backgrounds, as much as for the botanical depictions. In the distance, one sees churches, sailing ships, the Pyramids at Giza, Indian temples, and mountainous landscapes. A doctor who seems to have relied on practicing medicine for his income, Thornton nevertheless devised this high-risk literary venture. He began to invite subscriptions from 1797, but never managed to recover the prodigious cost of illustration and printing. Blaming the Napoleonic Wars for the commercial failure of the project, he was forced to curtail it after only twenty-eight of the planned seventy botanical plates. Thornton died in 1837 leaving his children on the brink of poverty, but his legacy is one of the most celebrated and magnificent botanical books in history. The plates comprise: "The Snowdrop" (Dunthorne state I); "The Persian Cyclamen" (II); "Hyacinths" 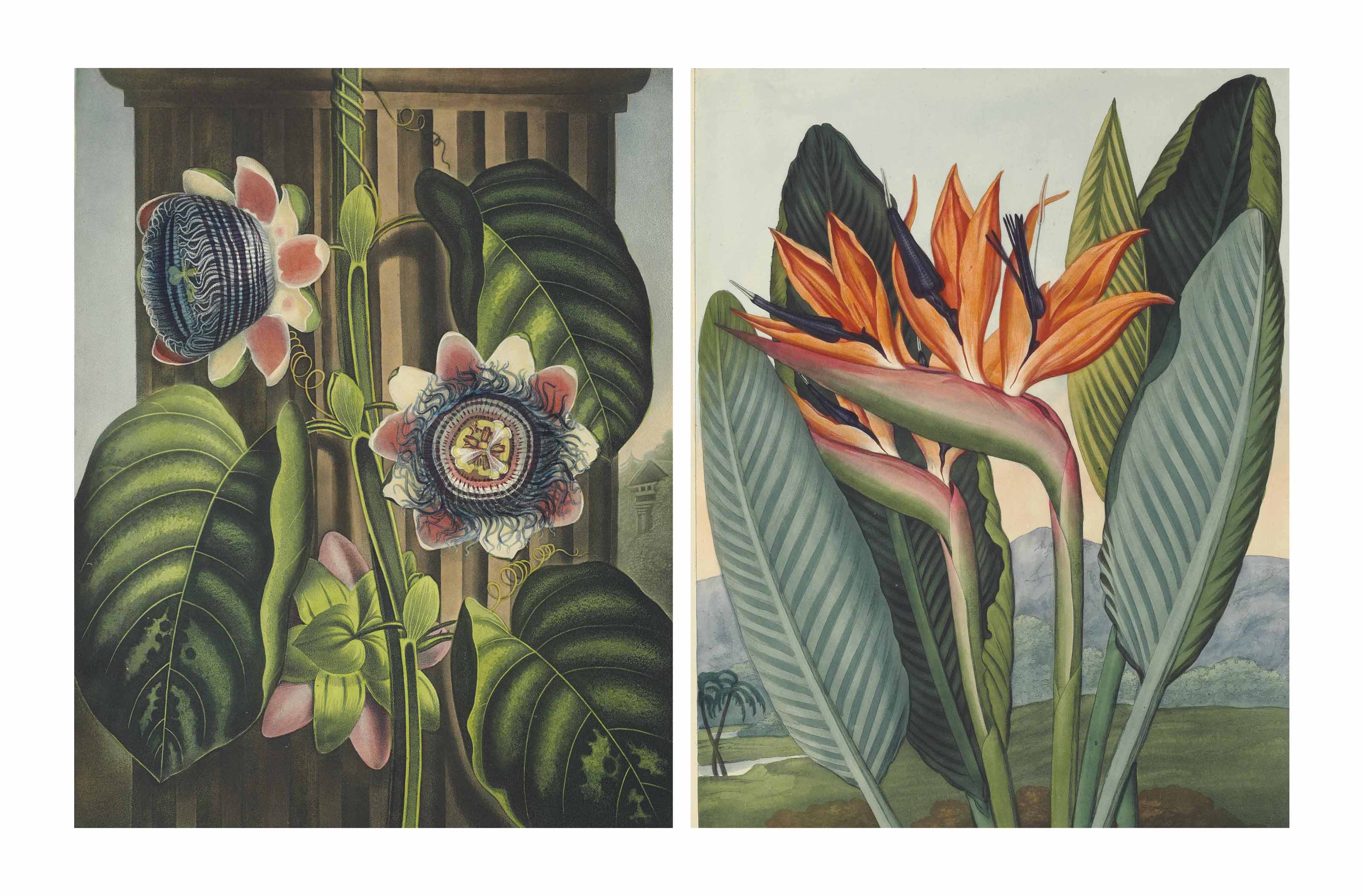 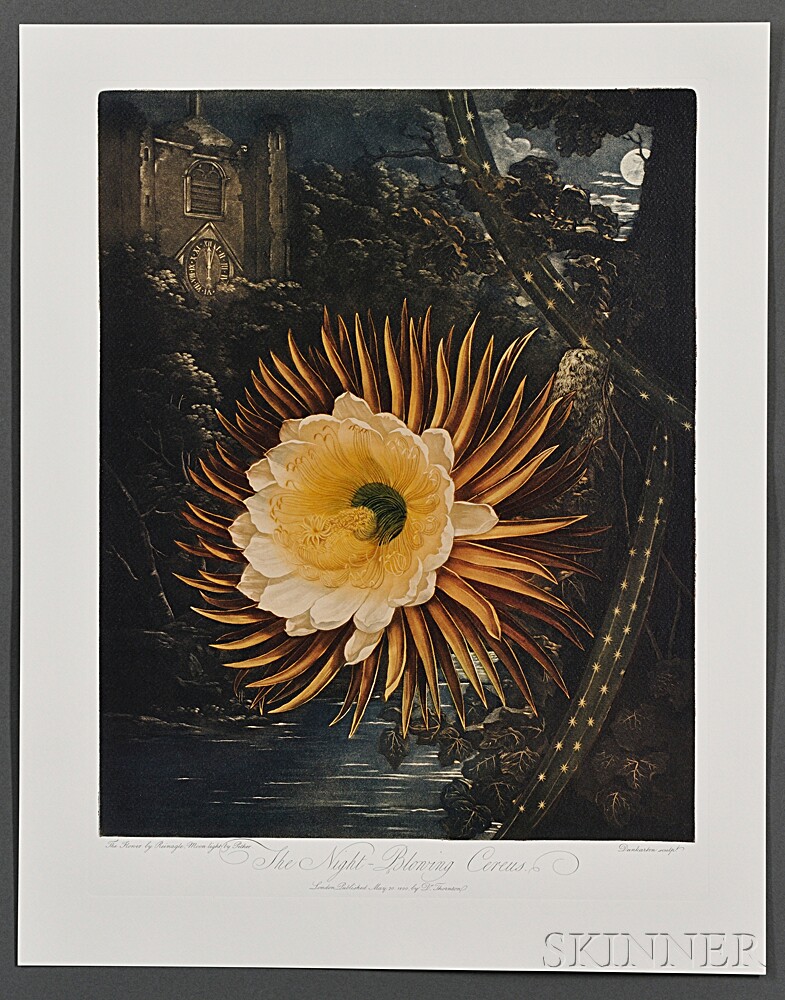 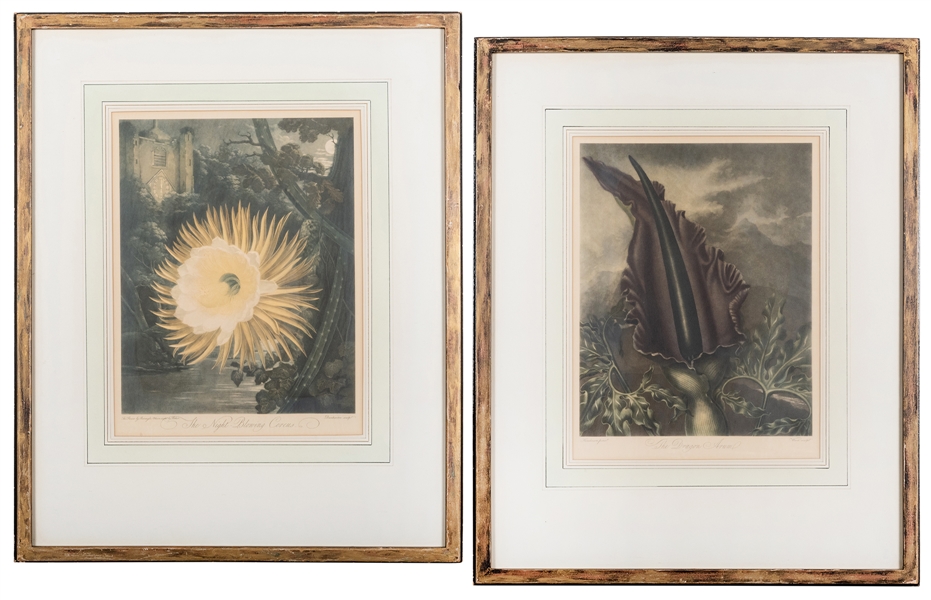