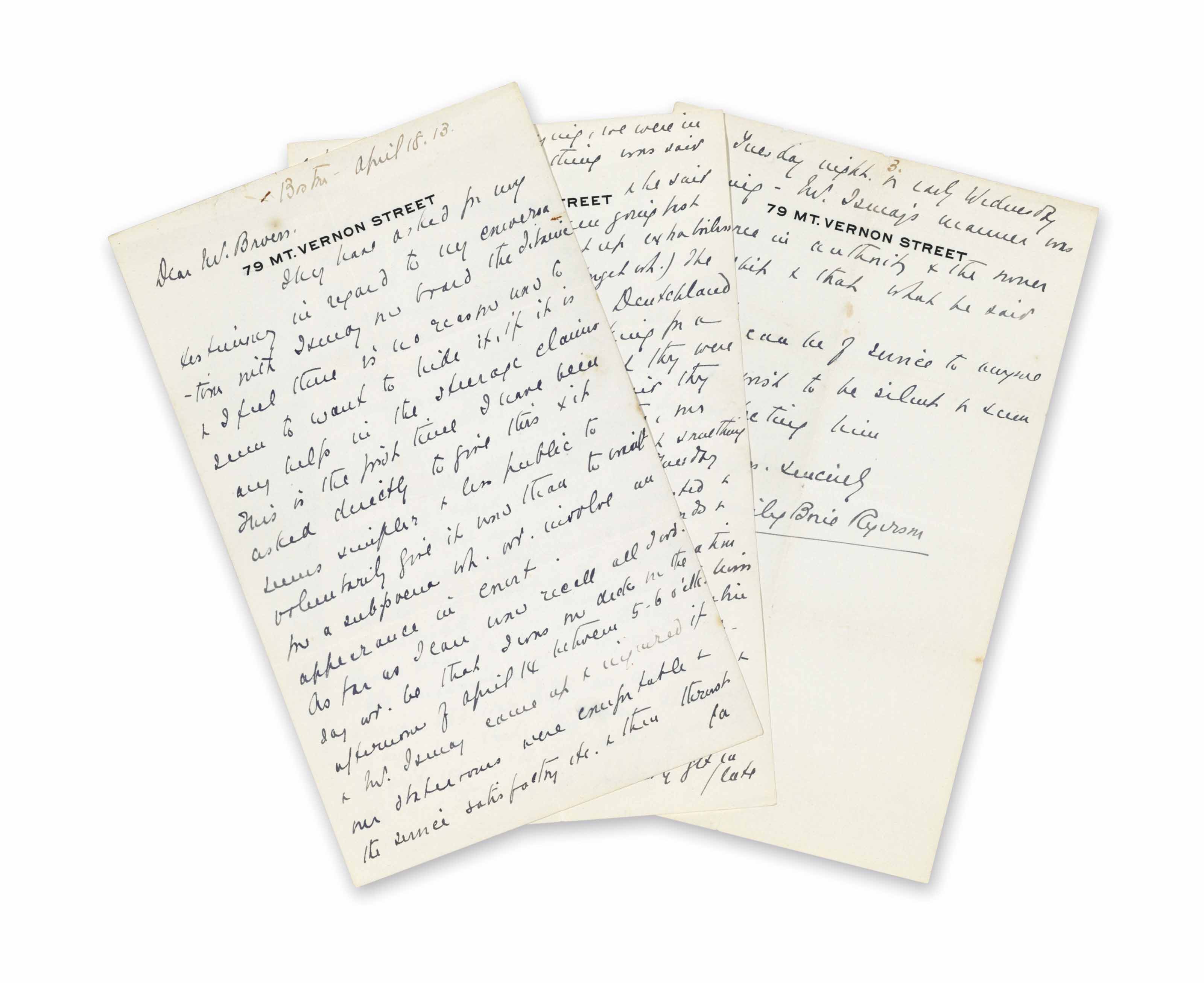 TITANIC – RYERSON, Emily Borie (1863-1939). Autograph Letter Signed (“Emily Borie Ryerson”), Boston, 18 April 1913.
TITANIC – RYERSON, Emily Borie (1863-1939). Autograph Letter Signed (“Emily Borie Ryerson”), Boston, 18 April 1913. Three pages, 234 x 146mm. (Light wear.) Celebrity millionaire and Titanic survivor offers sensational testimony about her conversation with Bruce Ismay: that he was recklessly speeding up the ship despite his awareness of hazardous icebergs. The present is one of the most damning Titanic letters written, in which a first-class passenger reports on the conversation she had with Titanic builder and White Star chairman, J. Bruce Ismay, just hours before the Titanic struck an iceberg. Ryerson’s testimony made headlines at the time of the enquiries, and cemented Ismay’s reputation as one of the great corporate villains of all time. If the Titanic had not been racing at nearly top speed among the icebergs, the force of impact would not have been enough to sink her. In part: “I was on deck in the afternoon of April 14 between 5-6 o’clock & Mr. Ismay came up and enquired if our staterooms were comfortable & the service satisfactory etc. & then thrust a Marconigram at me, saying, we were in among the icebergs. Something was said about speed & he said that the ship had not been going fast yet that they were to start up extra boilers that afternoon or evening … I was not much interested & cannot remember the exact words & details but repeated the conversation immediately to my husband & to Miss Bowen when I went down to my cabin & she remembers it & the strong impression wh. was left in my mind & hers was that they were speeding the ship up—to get away from the ice … Mr. Ismay’s manner was that of one in authority & the owner of the ship & that what he said was law.” Emily Ryerson was traveling to her eldest son’s funeral with her husband, three of her children, Miss Bowen (a governess) and her maid. Emily’s husband, Arthur Ryerson was killed in the sinking (unlike Ismay) but she and the rest of her party were rescued from Lifeboat 4. Emily’s son Jack was initially denied access to the lifeboat but his father’s pleas that he was only 13 were fortunately effective. This letter is published in Barratt, Lost Voices of the Titanic (2010). See also the June, 1913 transcribed deposition of Emily Ryerson in the Limitation of Liability hearings (titanicinquiry.org) and “Rich Men and Poor Men: The Story of the Ryerson’s on the Titanic ” in: Journal of the Titanic Historical Society , summer 1990. A copy of the latter, a period photograph of Ismay, and related documentation is included with the lot.