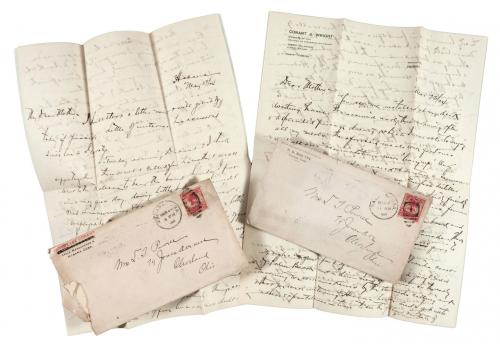 Title: Two Autograph Letters Signed "Albert" - 1904 First American Lawyers in Havana Author: Powell, Albert E. Place: Havana, Cuba Publisher: Date: 1904 Description: Two letters: March 23, 1904. 3pp. and, May 19, 1904. 4pp. With mailing envelopes. To his mother, Mrs. L.J. Powell, Cleveland, Ohio. Albert Edward Powell was a 30 year-old lawyer from Cleveland, a recent Harvard Law School graduate, who was considering a position with the Havana law firm of Ernest Lee Conant and Albert Wright, probably the first American attorneys to open an office in Cuba after the Spanish-American War. These letters give his impressions from the moment he arrived at Havana harbor “to see the yellow and white of the city looming in front of us and the low walls of Morro Castle perched above us...” His new law office (where, at siesta time, he found no one but the janitor), “is very pleasant but unlike a law office in the states, with its high walls, tile floors…marble stairway…and general Spanish effect…” He thought Havana “a queer city…with streets like alleys, stores without fronts, sidewalks as wide as the curb stones, its negroes galore from the pickanniny to the grey headed crone, its Chinamen, its senoritas in mantillas and face powder, its Spanish mules and the sunshine of a summer day flanking them all…” While appreciating the inexpensive restaurant food - “40 cents Spanish silver” for a “square meal” at “the best place in Havana”, when he began work, he was surprised to find his fellow attorneys dressed all in white, “coat and all.” Though assured that he would soon be in charge of handling Cuban war claims, he doubted that he would stay. Powell did, in fact, remain in Cuba for several months, writing a series of feature articles published in New York newspapers, in which he declared the corruption of Cuban politics to be the equal of Tammany Hall, but also praised the absence of race prejudice and the diverse “mixtures of blood” among the population, which, he predicted, would contribute to the creation of a “wide democracy”. Lot Amendments Condition: Very good. Item number: 234436

AUTOGRAPH COLLECTION]. A collection of a

FRENCH REVOLUTION -- A collection of let